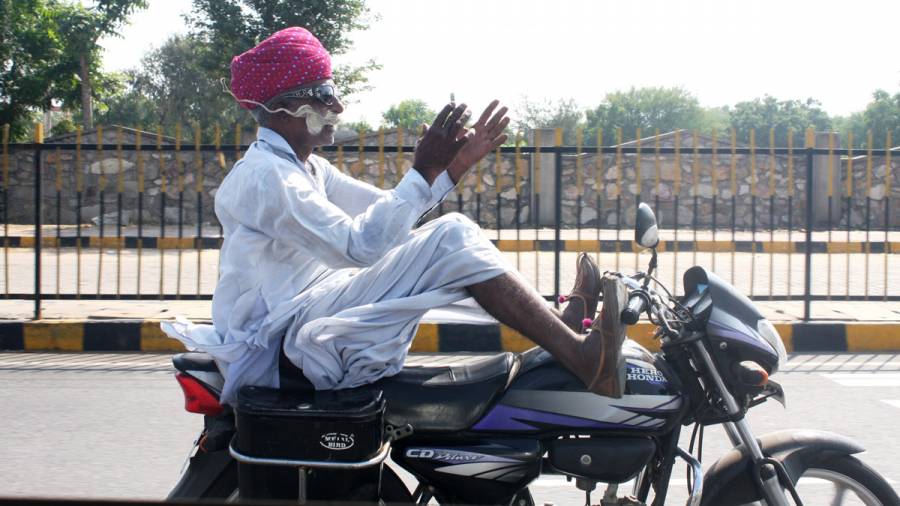 Thanks to the positive response to the previous feature on unusual sights in this series on Indian Highways, here are some more common and strange sights. Let's start with this turbaned chap in Rajasthan, riding a motorcycle with only his feet! 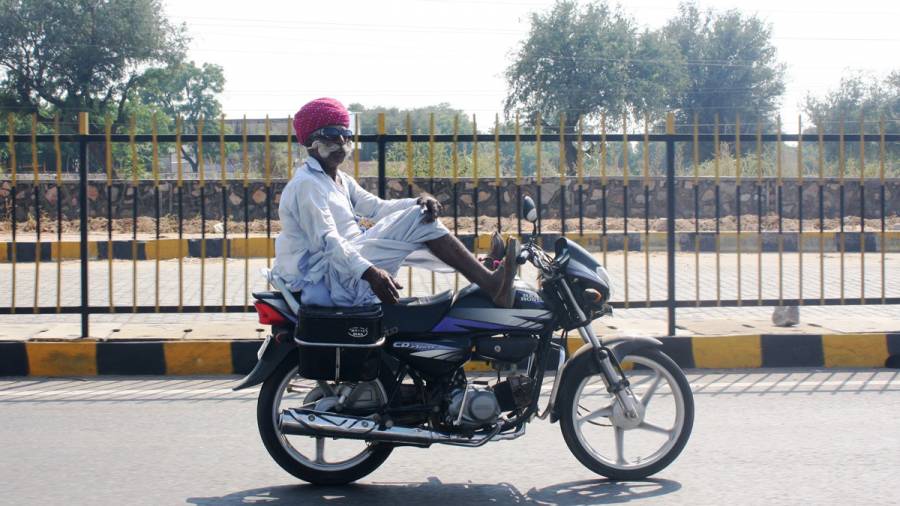 This guy with the big moustache and dark glasses, apparently loves showing off and getting attention

According to some locals, this fellow with his extremely long moustache does this "hands free and feet on handlebars" riding quite regularly, and gets a lot of the attention, because even on our Indian Highways, this is not a normal sight. He obviously loves showing off and all the attention this Turbanator receives, is possibly making him ignore every road safety rule, which is both sad and dangerous. 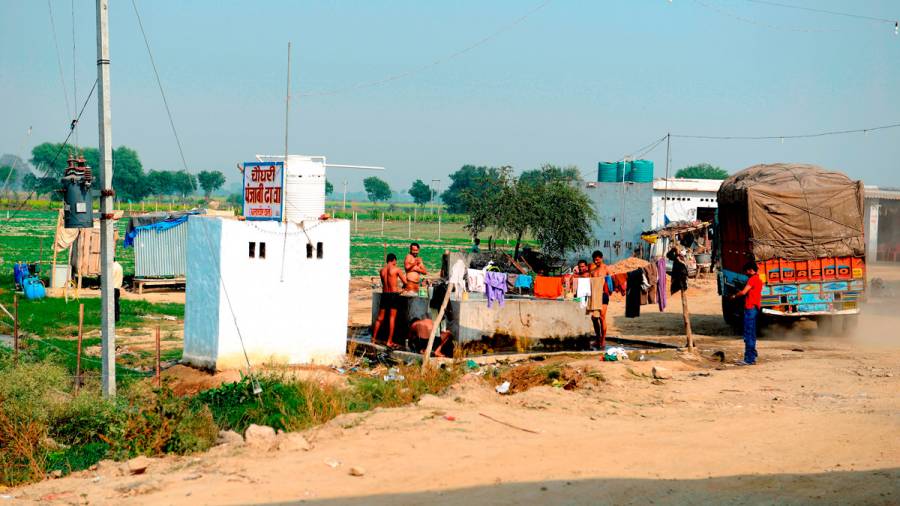 Frequent travellers on our highways must have noticed the public bathing places for our truck drivers. They are usually found at the entry of a dhaba and basically consist of a small tank with water supply. Truck drivers and their assistants or cleaners, congregate here to bathe and wash their clothes and while this is a common sight, people who have never seen such public bathing before, are quite surprised by the casualness and comfort with which it's done. 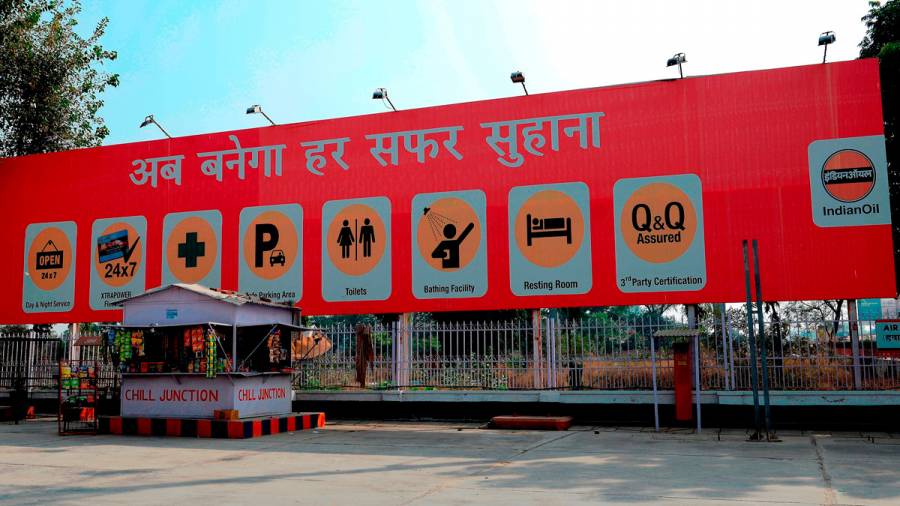 But maybe in time to come we shall see less of this as some fuel stations have begun to offer various amenities including bathing facility, toilets, resting room, parking area, first aid kit and so on. On one of my road trips I also came across a fuel station in Bihar, which met all its electricity requirements only with solar power. Going forward, use of solar panels in fuel stations is also sure to increase. 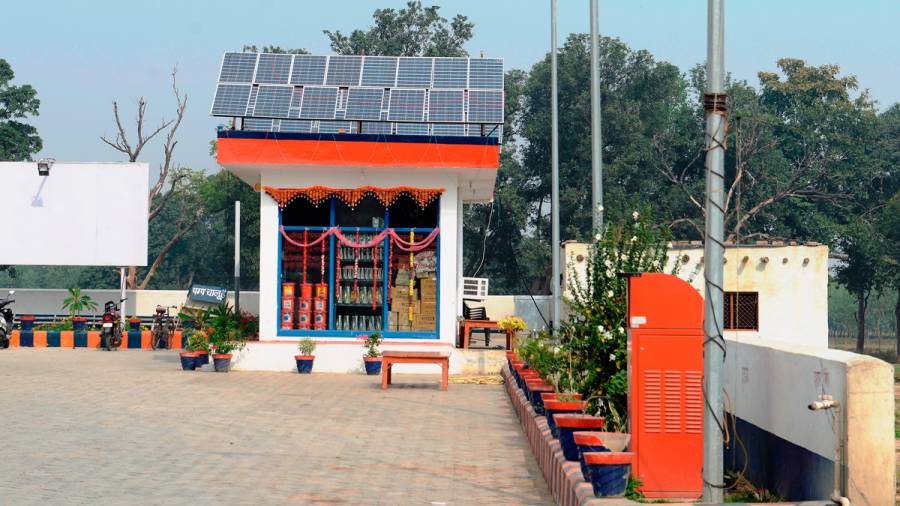 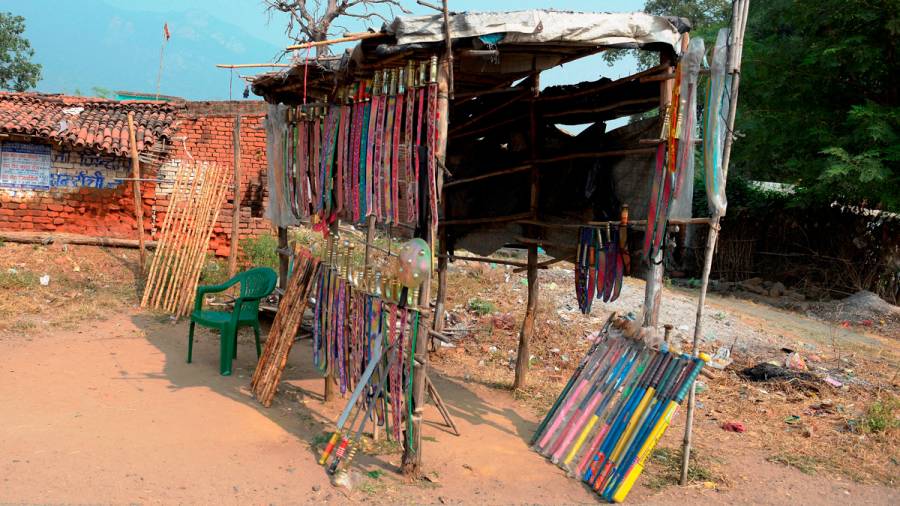 Unfortunately, there is another horrifying and scary sight that I am increasingly seeing on our highways, and this is the open sale of weapons. Yes, in many places lethal weapons like swords, choppers, daggers and also strong sticks and baseball bats are sold freely and even displayed very decoratively. 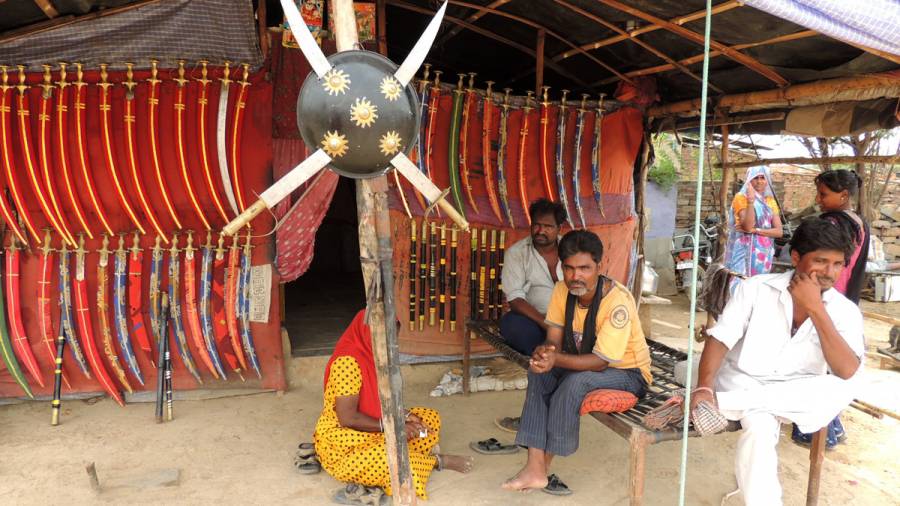 These guys even make to order sharp swords, and daggers

A few shopkeepers I spoke to said these were purchased by truck drivers and cleaners for their protection! Given this and the free availability of weapons, it's certainly not a good idea to get into an argument with anyone on our highways. 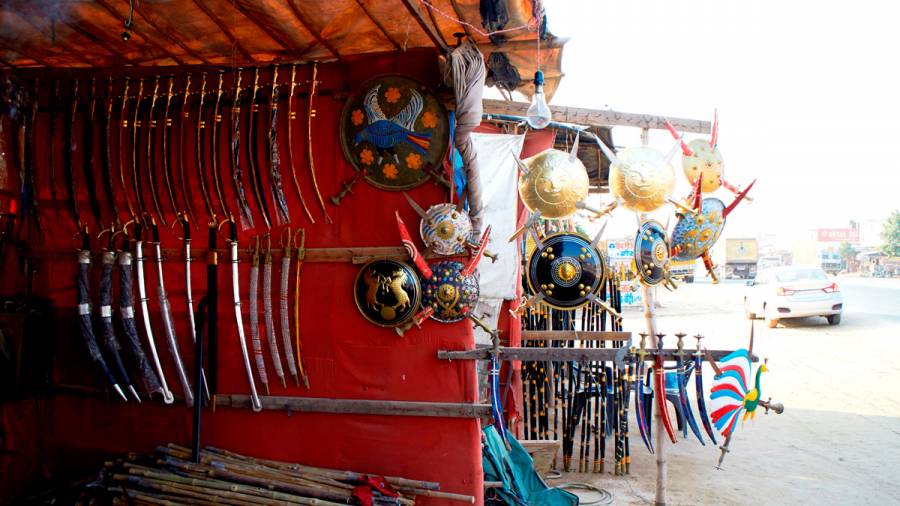 In certain parts of our country, you often find piles of cow dung put out on the road dividers to dry. For centuries, we Indians have used cow dung cakes for cooking or for fires for heating, and though they may be somewhat rare in our cities, cow dung cakes are a common sight on our highways. 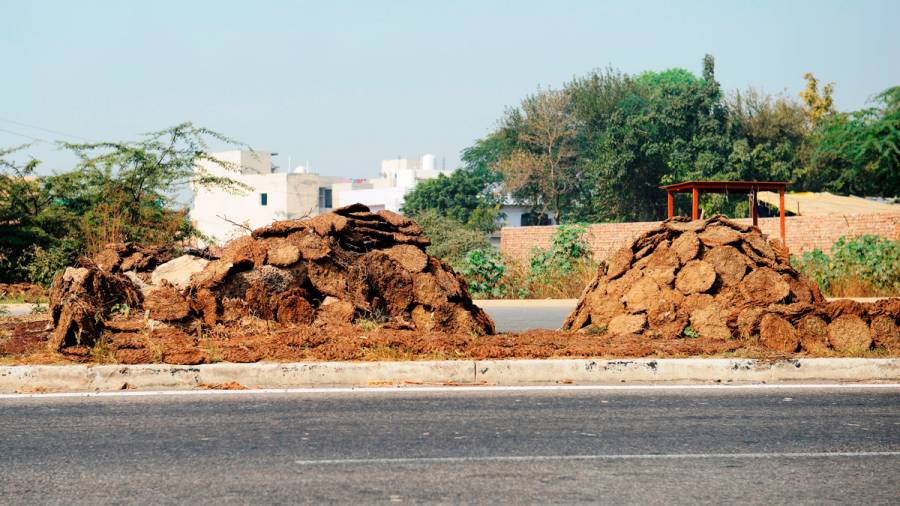 Dung cakes that are used for cooking fires, put out to dry on a road divider

Those who have traversed Indian highways running close to our western border with Pakistan may also have come across some camel mounted BSF (Border Security Force) personnel. Yes, the BSF uses camel mounted soldiers for patrolling in our desert regions, and sometimes you also come across them on our highways. 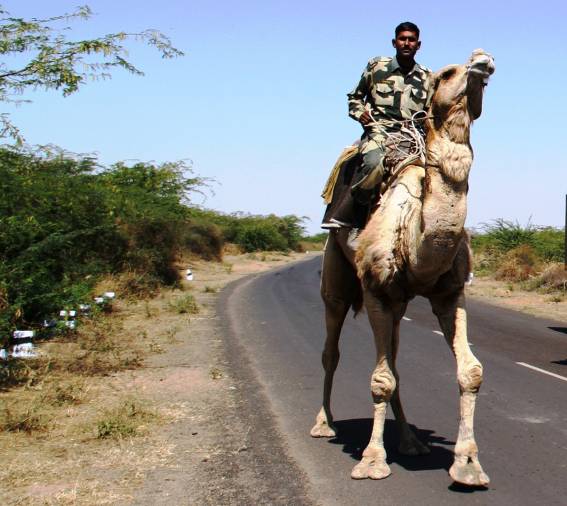 And if you are driving in some of our hill states like Himachal Pradesh, do keep a lookout for signboards at the beginning of villages that list the population. Once while motoring in HP, I also came across a policemen wearing a mask and darker than night wraparound dark glasses. When asked why he was using such heavy duty sunglasses, he smiled and said, "Here high in the mountains, the sun is very strong and I like to protect my eyes". 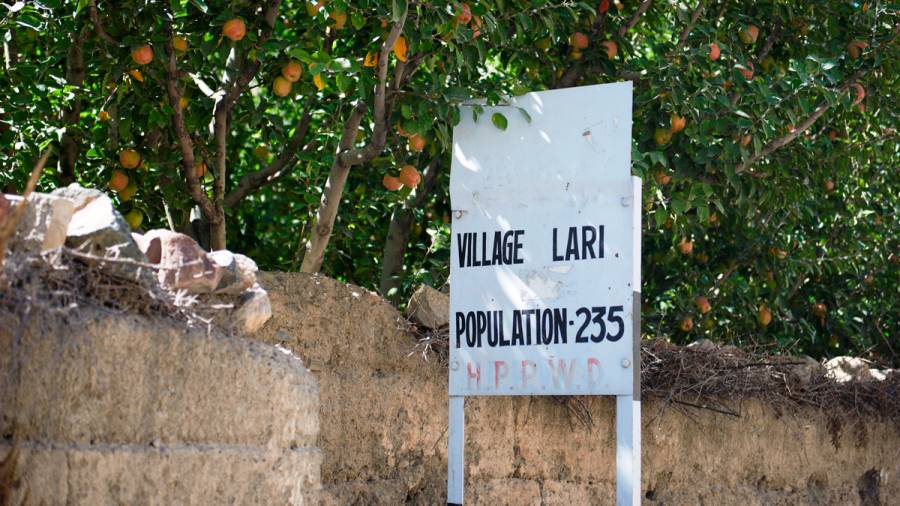 Some villages in the hills have signboards displaying their population 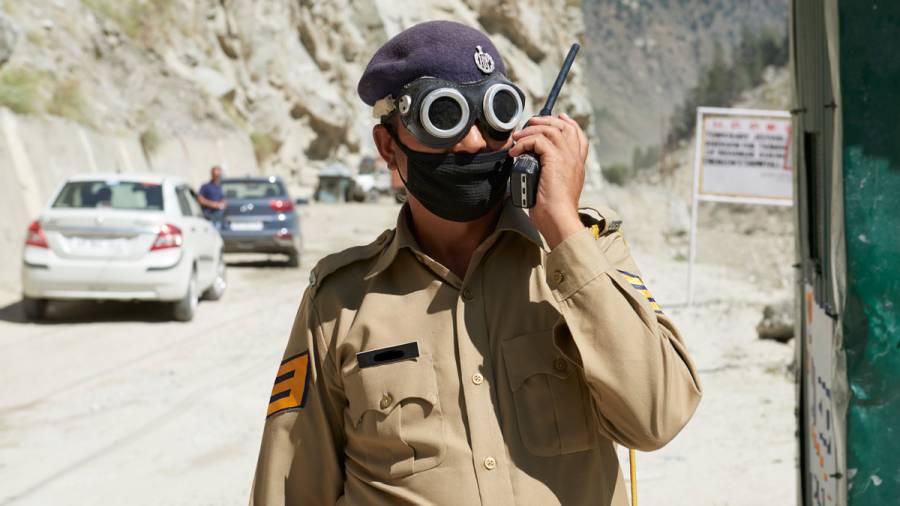 At times you also find a flood water measurement scale placed at the side of low lying roads or bridges and culverts, which are prone to going under water in heavy downpours. Such a scale provides an idea as to how deep the water is, and if it is safe for a vehicle to drive across the flooded stretch. Strangely, though floods are getting increasing common with every passing year, such flood measurement scales are becoming rarer in India. 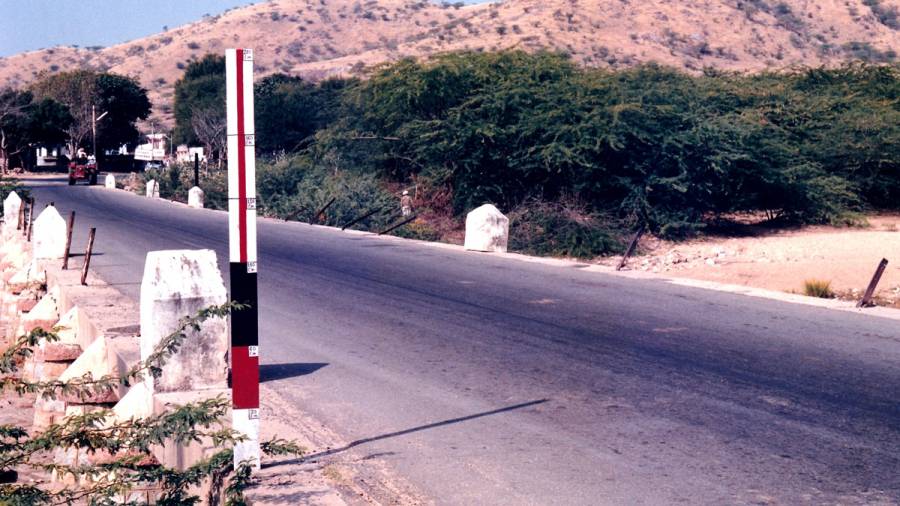 Such floodwater level measuring scales are strangely rare, and quite difficult to sight on our roads now

Amongst the common sights is that of a helper or cleaner changing truck tyres all on his own. Often they have to stand on the spanner and jump up and down to loosen the wheel nuts. 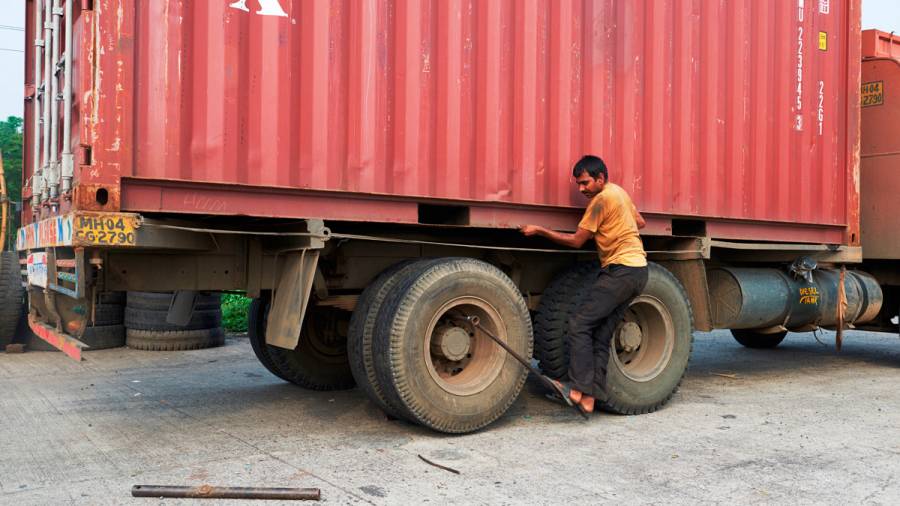 The cleaners who change tyres, often have to stand and jump on the spanner, to loosen the wheel nuts

Simple, but efficient, tyre puncture repair shops are also found all along our highways. In fact you see them in the remotest of regions, and often the puncture repairman's biggest and most expensive asset, is his air compressor. 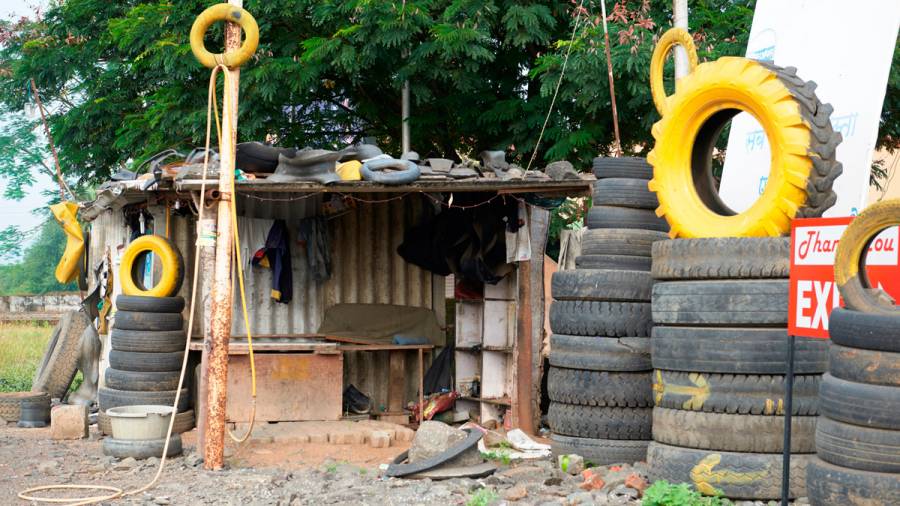 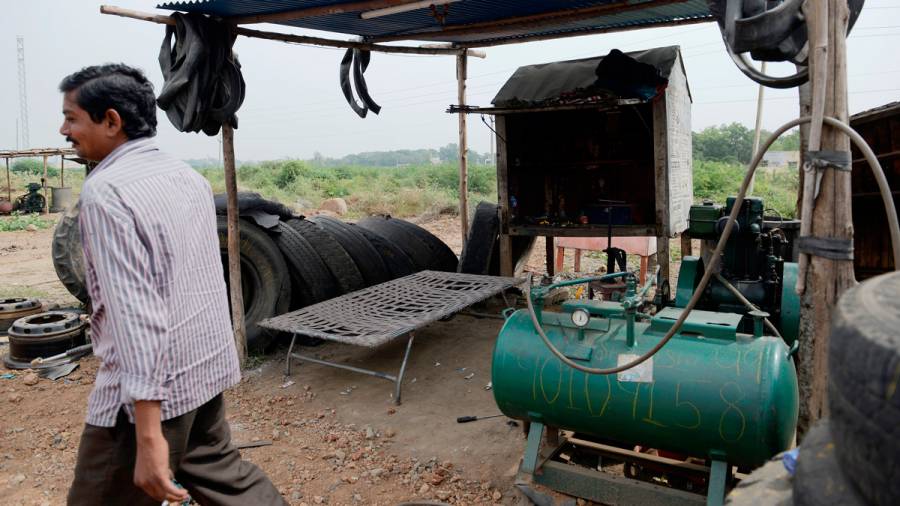 Given the fact that many old vehicles are still in use in our country, breakdowns and mechanical problems are regular occurrences. And to resolve and repair these problems, all sorts of small workshops line our highways. Interestingly, a blue coloured jack kept right in front of the workshop, means it has a travelling or "mobile mechanic". 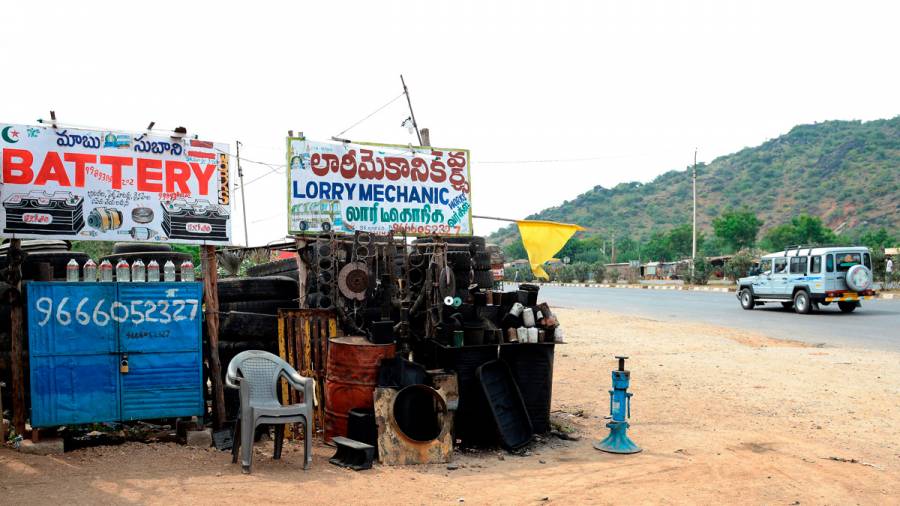 A blue jack kept in front of the shop, indicates that it has a travelling or mobile mechanic

Yes, these guys take their tools and go to where the vehicle has broken down, and repair it onsite. This way the towing charges and hassles get saved and some of the mechanics are so skilled, that I have even seen them rebuilding an entire engine right in the middle of the road! This honestly is something that can only happen in India. 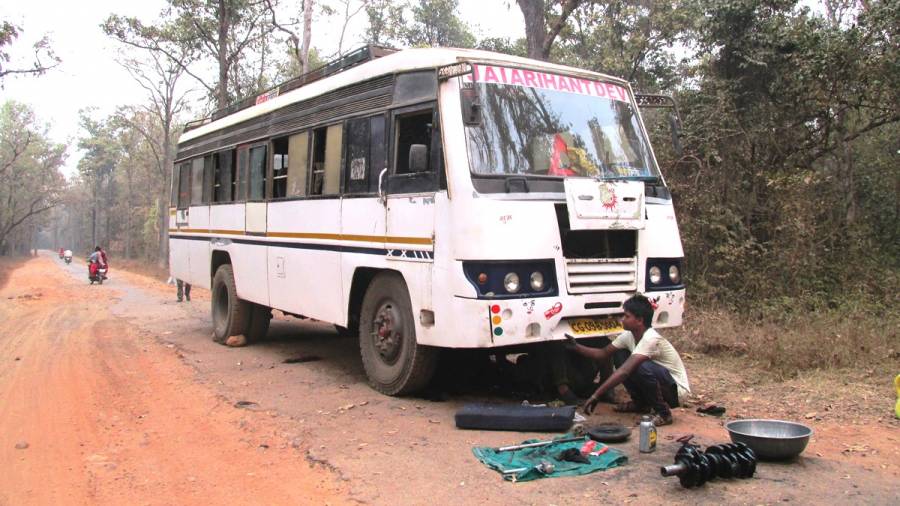 Some of these mechanics are so skilled, that they can dismantle and rebuild an engine right on the road

Sometimes you also come across a large troop of monkeys, sitting in the middle of the road. They stop vehicles and at times even climb on to them, in an effort to collect some food items from the occupants. Many Hindu's revere monkeys and consider feeding them a very pious act and as a result monkeys have got used to collecting food from humans, especially those travelling on our highways. Again this kind of forced food collection by monkeys is something that can only happen in India. 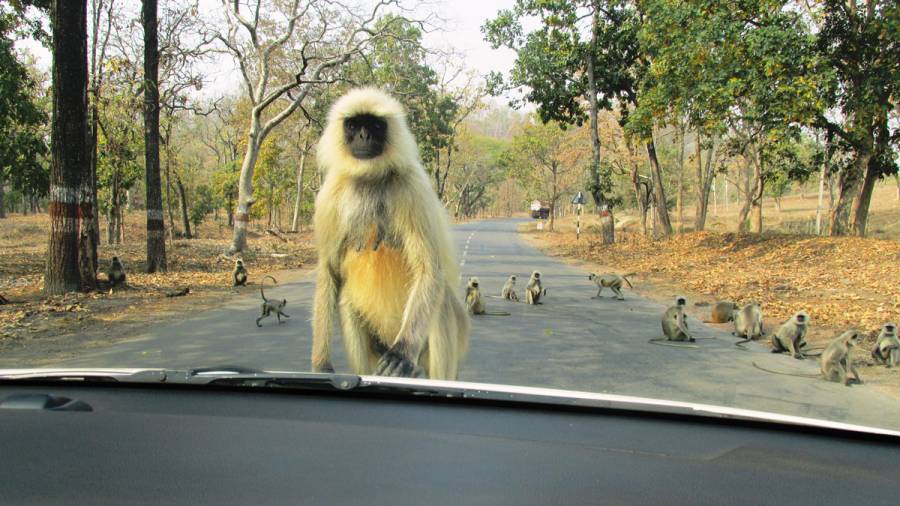 Another sight which is common, but tragic, is that of more than the permitted number of two people travelling on a two-wheeler. See the below photo of a family of five on a motorcycle. They are fortunately smiling and happy. But, only the man of the house is wearing a helmet, with the others just having a thin cloth wrapped around their heads. So many people on one two-wheeler is definitely unsafe, as the bike will be that much more difficult to balance and control. 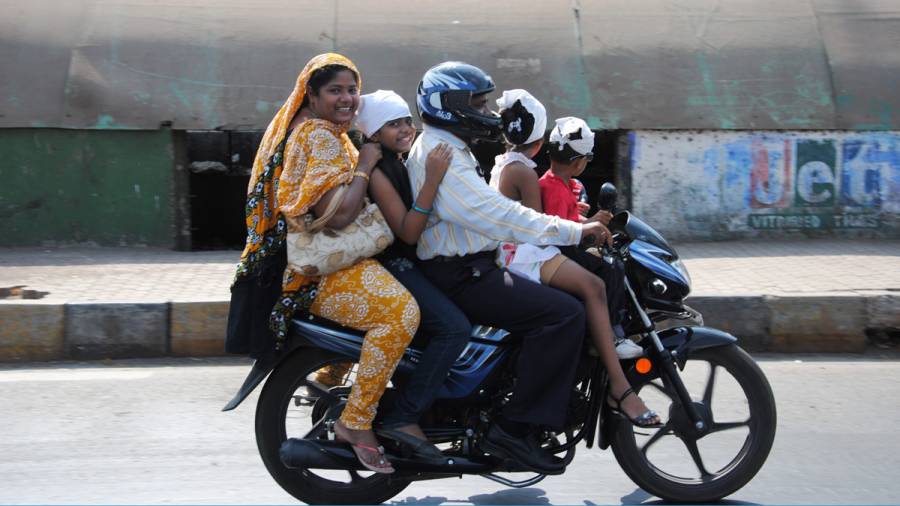 This is a happy family for sure. But it's really unsafe to have so many travelling on one motorcycle

In comparison, check out this poor man travelling with his child and belongings placed on a cot that is being carried by a donkey. And this man is also smiling and content. Once again this can only happen in India. 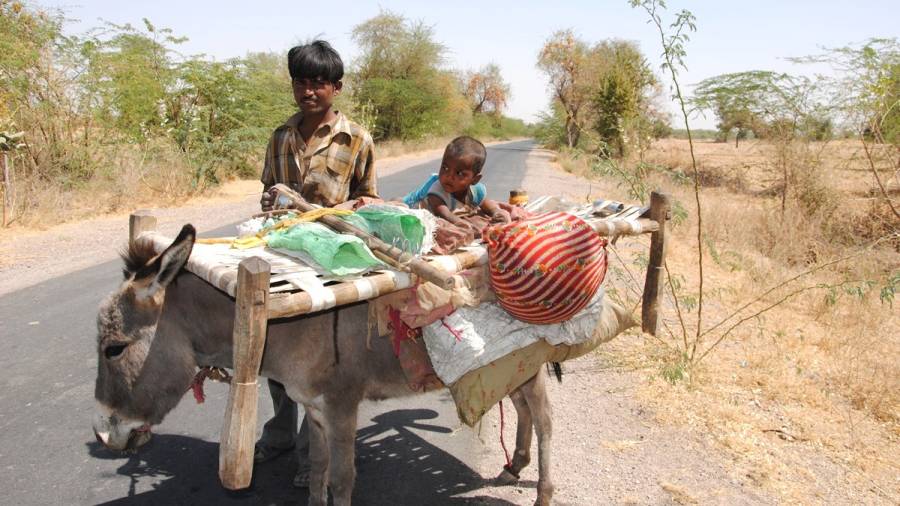