With how popular the Hyundai Alcazar, and before it, the Tata Safari have been right from the get-go, this three-row midsize SUV segment of the Indian car market is quickly becoming the newest frontier for carmakers to draw in the numbers. And having sampled both these SUVs, it's surprising we're only just seeing this trend pick up. We can't think of any significant downside to the immense flexibility that an extra row of seats provides, in a footprint not significantly larger than these SUVs' two-row counterparts. But we still need to see which one of these pulls off this package the best. 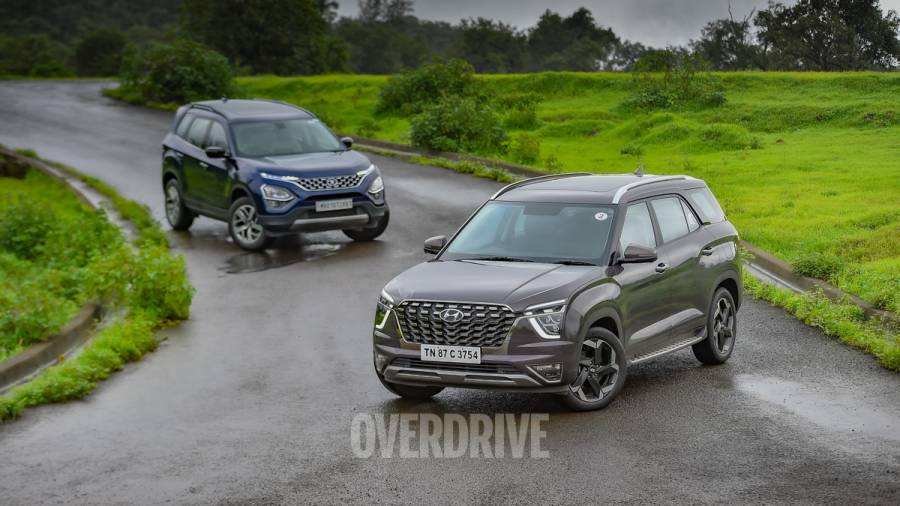 Both, the Hyundai Alcazar and the Tata Safari stay true to the five-seater SUVs they've been derived from. So the Alcazar inherits the more compact, city-slicker stance of the Creta. The Safari, conversely, is immediately noticeable as being taller, wider and longer which translates into better proportions and quite an imposing presence. If the sheer mass of car your money buys is what's most important to you, the Safari is your bet.

But that's not to say that the Hyundai won't grab eyeballs. The full-sized grille's chrome inserts attract just the right amount of attention, nicely offset by the new detailing in the split headlamps and the bumpers. The Safari uses similar visual trickery to separate from the Harrier, with more chrome and a different honeycomb grille but isn't quite as effective at separating itself from the Harrier as the Alcazar is from the Creta. 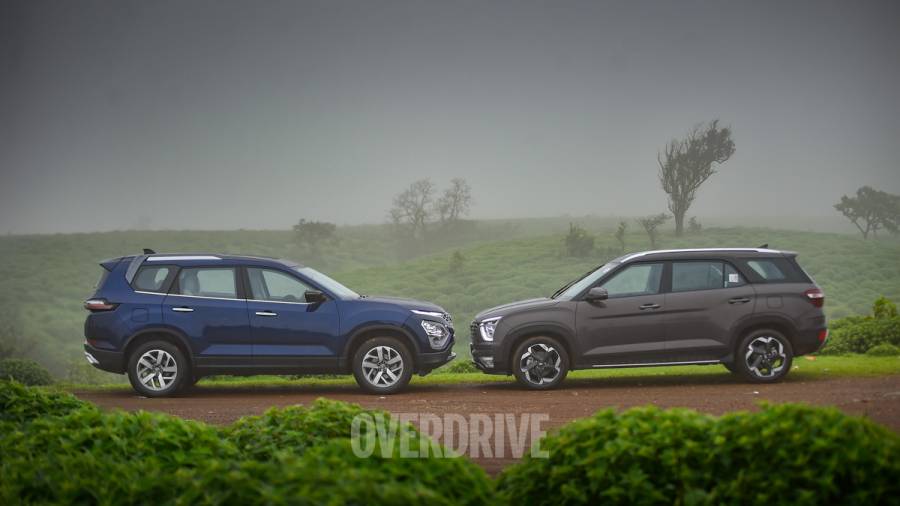 The two only truly differentiate themselves when seen in profile, with their extended rear sections. Hyundai has gone further and lengthened the Creta's wheelbase by 150mm for the Alcazar to accommodate the extra row of seats but it must be said that the Safari looks no less proportionate with just the extended rear overhang(63mm) it carries. The cladding around the rear quarter-glass and the stepped roof effect(ornamental in this sunroof-equipped version) seems to help. We like the Alcazar's flatter roof and the darkened C-pillar but the Safari's softer lines seem to gel better as a design. Both sit on 18-inch wheels which works just fine on the Alcazar but with its sheer size, we think 19s would have struck the right balance for the Safari. 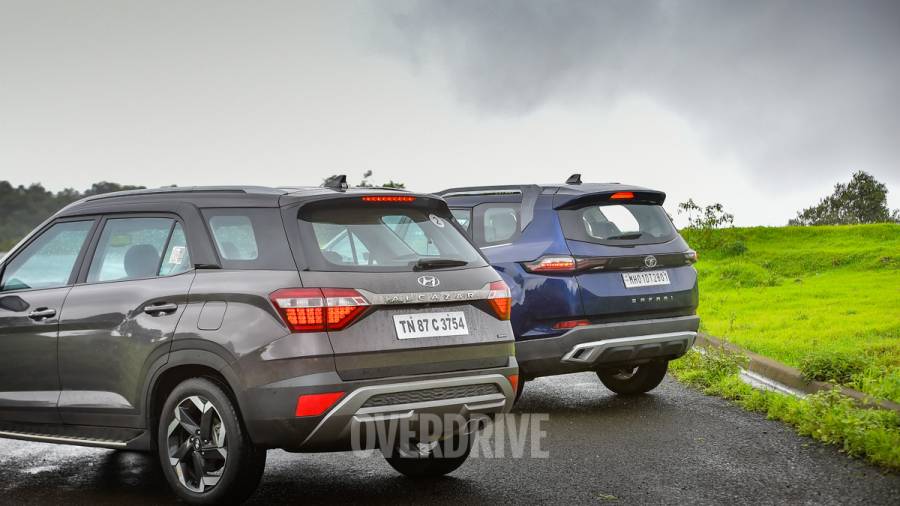 There are new rear sections to both SUVs to accommodate the extensions. The Alcazar's is the more noticeable departure with the large two-part LED lighting and the wide chrome band between them. These clusters seem a touch larger with the narrower Hyundai which again seems to make the Safari look the better executed with its similarly upright but better-contoured rear section. 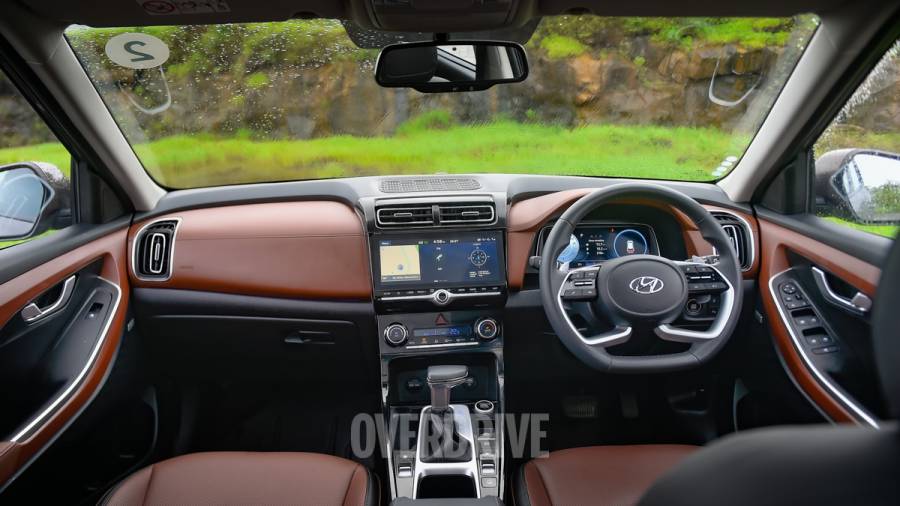 On the inside, the general layout and themes have been carried over for both, but the focus is firmly on the rear seats as well as on offering a richer experience on the move. In the Hyundai Alcazar, this comes across in the tan and dark grey theme to the cabin. The layout of the dashboard is otherwise the same as in the Creta, with the distinct flowing centre console angled to the driver and the in-dash 10.25-inch touchscreen. This makes a great first impression but we would have liked to have seen a few more soft surfaces, especially around the dash-top and other frequent touchpoints. 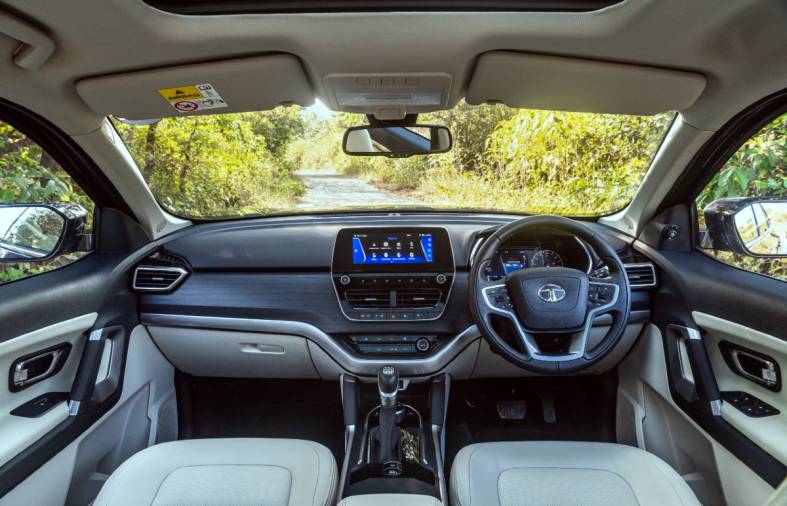 The Tata Safari makes a similarly appealing first impression, by offering a good mix of materials and textures in the cabin and by having more of the touchpoints, including the dash top, finished in softer materials. The Hyundai still holds a slight edge in the way everything seems to be put together but the Safari seems to offer a more thoughtful mix of materials, even if the white and grey theme might take some maintenance. 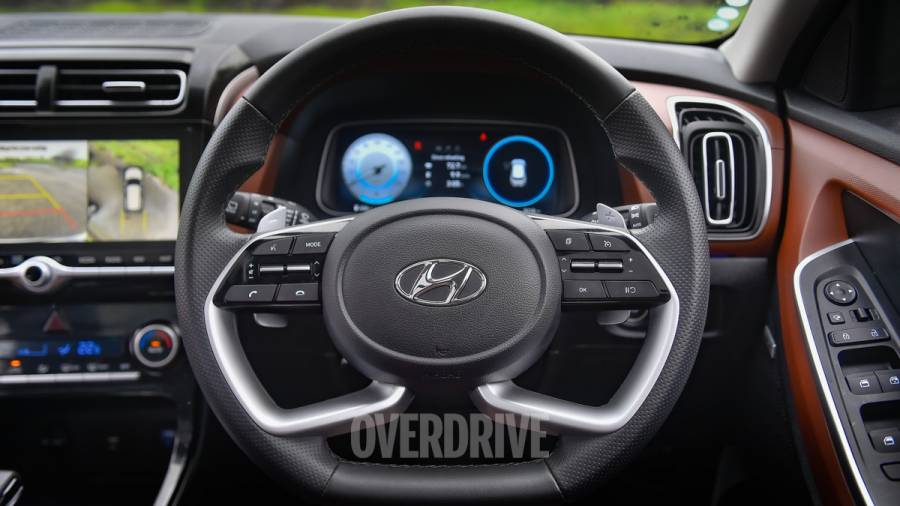 But as with most new Hyundais, the Alcazar's trump card is the massive list of features and conveniences it offers. The new 10.25-inch instrument cluster is one of the highlights with its crisp layouts and the very useful lane change function that comes with the also new 360-degree camera. There's multi-colour ambient lighting, wireless charging and ventilated seats, all of which the Safari misses out on. In fact, the Hyundai's connectivity package is significantly more advanced than the Tata's with a touchscreen that is much more fluid in its operation, far more seamless Android Auto/Apple Carplay integration and a much wider suite of connected tech and voice controls. 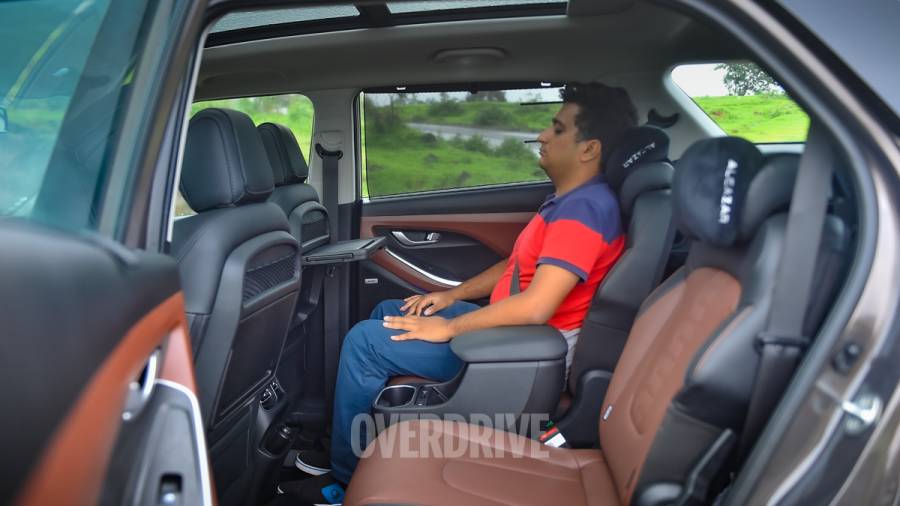 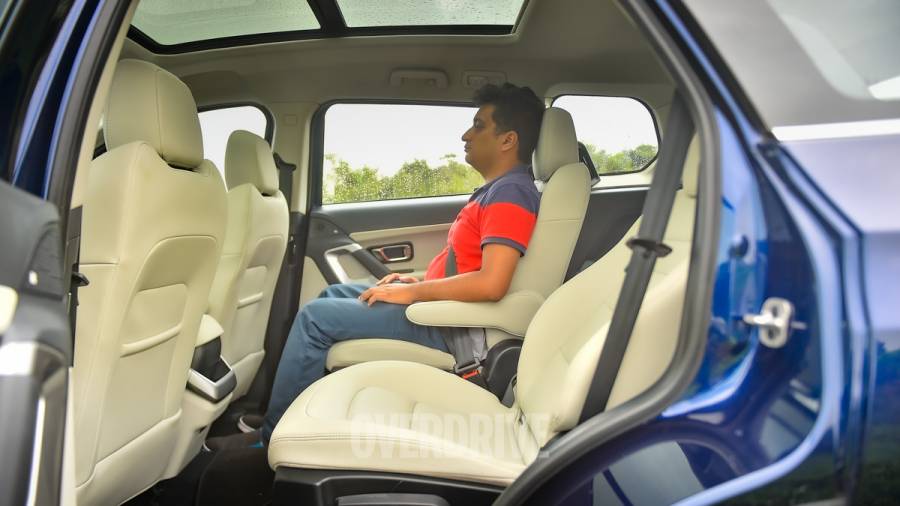 This continues to the second row where there are sunshades in the windows, another wireless charger and the foldable tray tables. But even with this, the Safari is the clear choice if comfort in this row is your absolute priority. In the captain's chairs here, the Tata offers larger, more supportive seats with just the right amount of cushioning and underthing support. There is a much greater sense of space here, with the raised seating and the wider range of legroom adjustment that the second row offers in the Safari. Both come with a reclining function and a panoramic sunroof, but the lighter colours exaggerate the Safari's larger dimensions to create a sense of space that the Alcazar lacks. The second-row seats in the Alcazar are reasonably supportive in isolation and legroom is much improved from the Creta, the soft headrest cushions adding a special touch too. 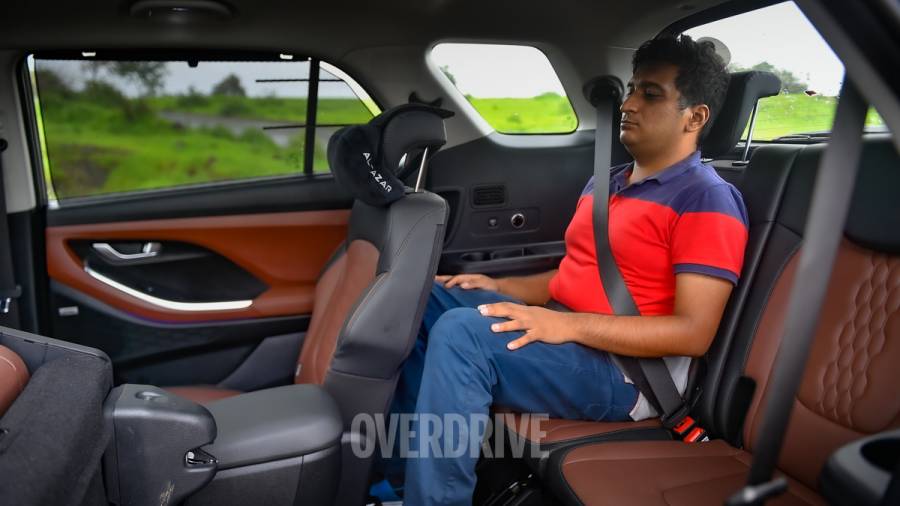 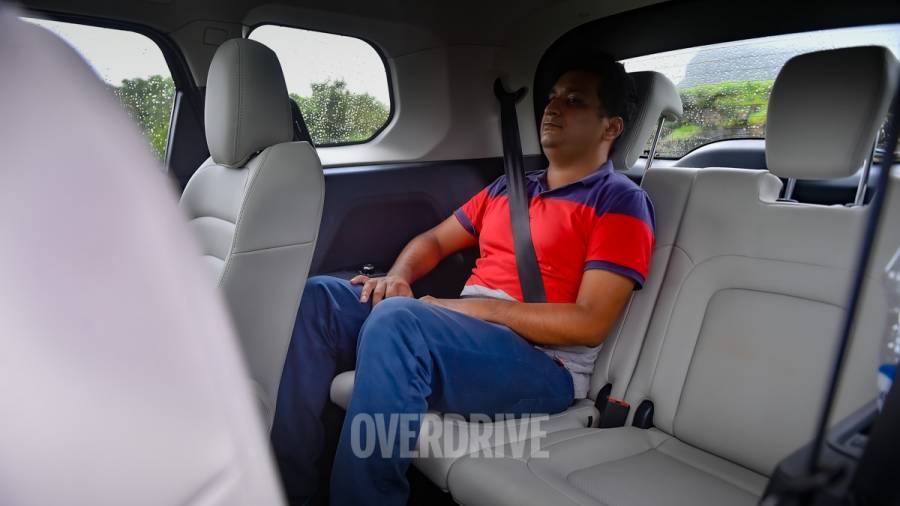 A significant benefit of the Alcazar's second-row seats are that they tumble and fold to offer easier access to the third-row, there's even a thoughtful indent along the door sill to serve as a handle. This is quite unlike the Safari where, in these captain seat versions, the only way in is through the wide but still awkward gap between the two seats. But once inside, the Safari is the best bet for longer journeys. There's more legroom even with the second row pushed back fully, enough for adults to spend some amount of time in. As is expected there's not much thigh support or a very supportive seat back in either, the Alcazar's third row is best used by children. Both offer a separate AC unit as well as USB ports and cupholders in this space. The Alcazar claws back ground with its more practical storage spaces, there is more boot space with all rows up and with the folding second row, there's a flatter, easier to access load bay. The second-row armrest could have had a folding mechanism to fully utilize this space, but still, there is much more luggage space with the Safari's second-row not offering any flexibility in this regard. 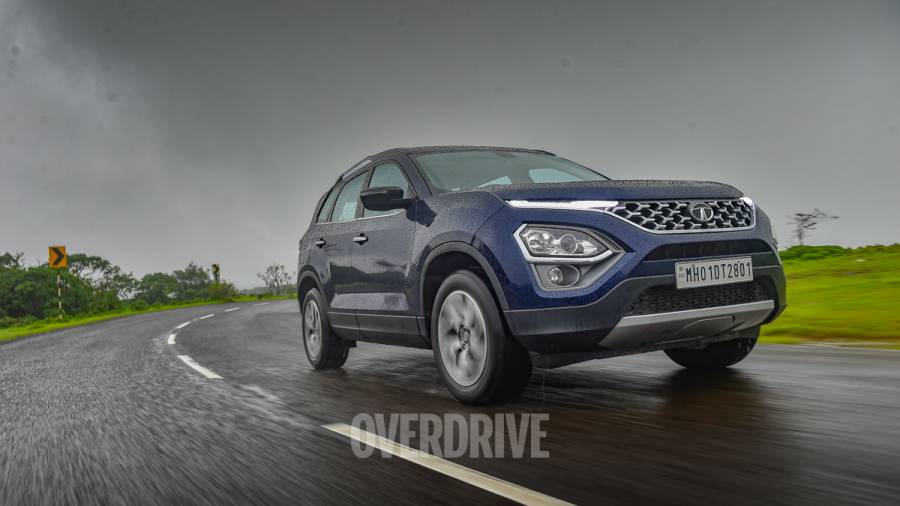 In the diesel versions we have here, the Alcazar can also be had with a new petrol engine, the Tata Safari holds a distinct advantage on paper. And there are few surprises with how that translates to the real world. The 170PS and 350 Nm from the Stellantis-sourced 2.0-litre Multijet diesel in the Safari is enough to offset the significant weight advantage that the Alcazar has, largely due to the 115PS and 250 Nm it makes from the 1.5-litre diesel it's fitted with. 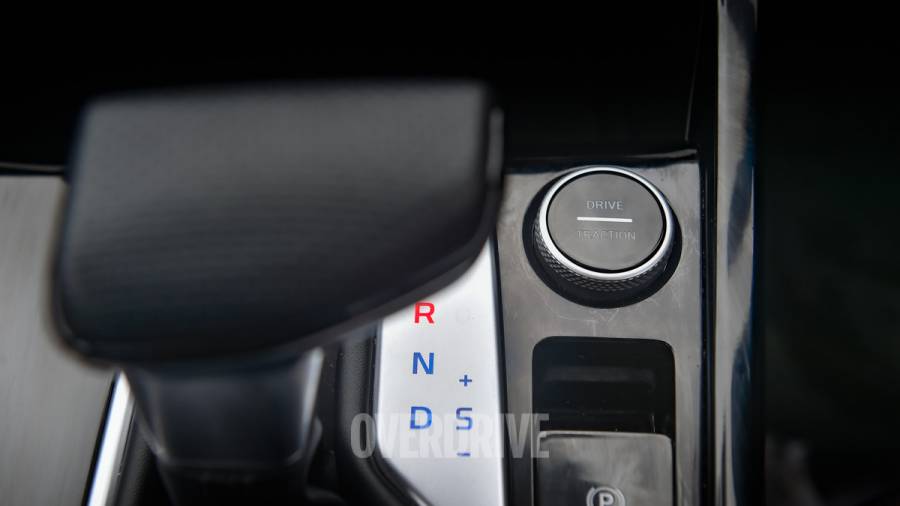 But having said that, the Hyundai-developed six-speed torque converter shared between both SUVs here is expectedly better attuned to the Alcazar's motor. This makes the Alcazar a smoother companion on the daily grind, where the gearbox does very well to extract the best out of the engine's relatively modest outputs. There is a linearity to the power delivery that makes tackling start-stop traffic just that bit easier.

The Safari is better at keeping up with traffic as our numbers suggest thanks to its higher outputs, although the gearbox can't eradicate the larger engine's lag quite as well which makes the experience feel a touch more hesitant, an effect compounded by the drivetrain's tendency to coast off-throttle. But the Safari offers a much better view out, you're sitting higher than most others and the edges of the bonnet are easily visible. The lighter steering also works well to hide the Tata's girth. 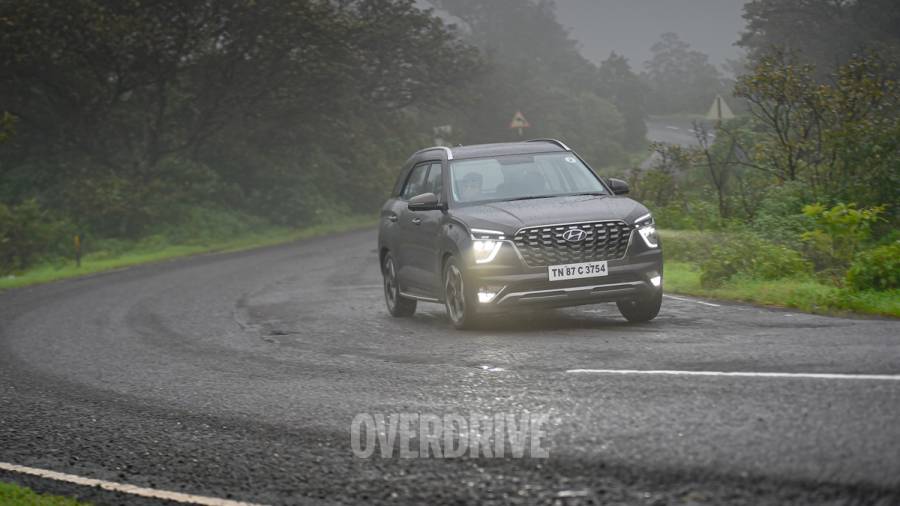 Besides, the Land Rover derived underpinnings lend the Tata a sense of indestructibility over heavily battered roads that's quite reassuring after having spent some time in the Alcazar. Unlike in the Hyundai, very few jolts are passed into the cabin and even though you can hear the suspension hard at work, things remain fairly serene inside. Both SUVs here have been given different suspension tuning over their two-row counterparts, with Hyundai having gone further and strengthened the chassis in the Alcazar with more high-strength steel. This has worked, the Alcazar is one of the more comfortable Hyundais we've driven, especially at steady urban speeds, where the SUV dials out minor road imperfections commendably. 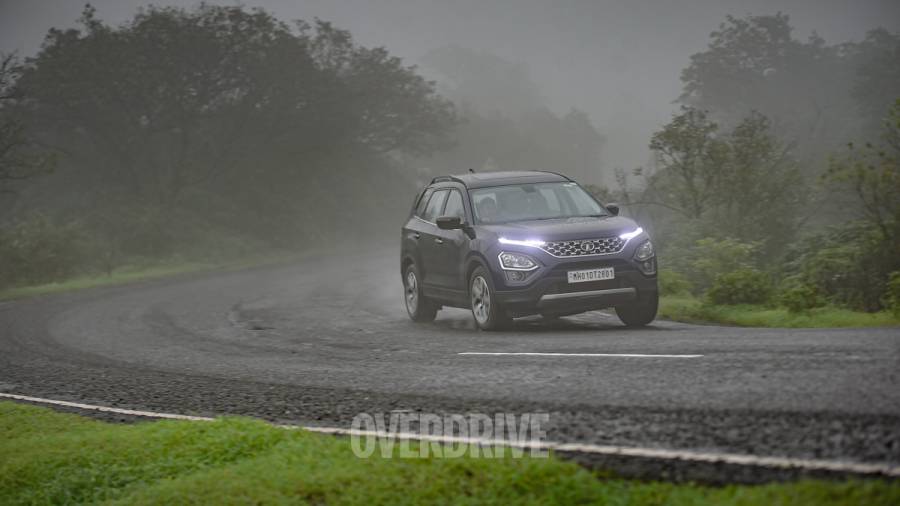 The Safari is somewhat caught out in these very specific situations where the suspension seems to be unable to fully dampen small, repeated vibrations. But once at highway speeds, the Safari is our clear favourite. It feels much more comfortable at building speeds and holding momentum with a solidity that's quite reassuring. Surprisingly, it also feels more confident around bends. There's more body roll than in the Alcazar but this is more progressive and the squarer dimensions make it feel more cohesive around turns. 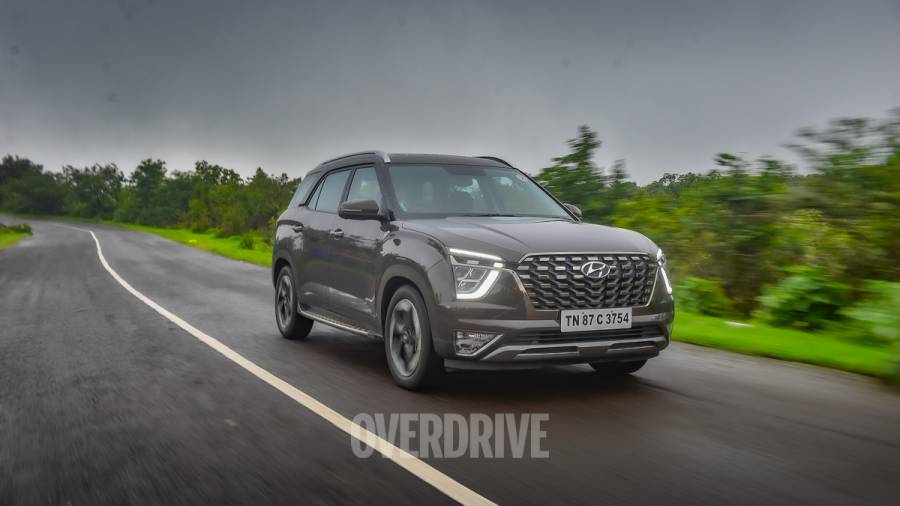 The Alcazar is hampered by its lower outputs, which makes maintaining speeds and passing slower traffic a tad bit less straightforward, a trait that will likely be exacerbated by a full load of passengers. The Hyundai's steering offers more precise control here, the counterintuitive setup in the Safari is laborious at parking speeds but doesn't quite weigh up in traffic. But this doesn't fully cancel out the Alcazar's slightly twitchy demeanour at triple digits speeds where the suspension can't quite iron out undulations or broken patches completely. As for slowing down from speed, both cars could do with a bit more initial feel and bite from the brake pedal, but pushing through this reveals a useful amount of braking performance. The lighter Alcazar fairing a bit better.

Both offer drive and traction modes and we found choosing between comfort and sport is all you really need to worry about. The Safari offers its full outputs in this mode and is a more alert drive in this situation, although this should widen its efficiency disadvantage to the Alcazar further.

Neither of these SUVs have been tested for Global NCAP ratings. But both offer six airbags in these top trims with the Safari also adding a hill-descent control function. The Alcazar gets TPMS and the very useful 360-degree cameras that incorporate the lane change camera right in the instrument cluster. Conversely, the lone rearview camera in the Safari is not very crisp. 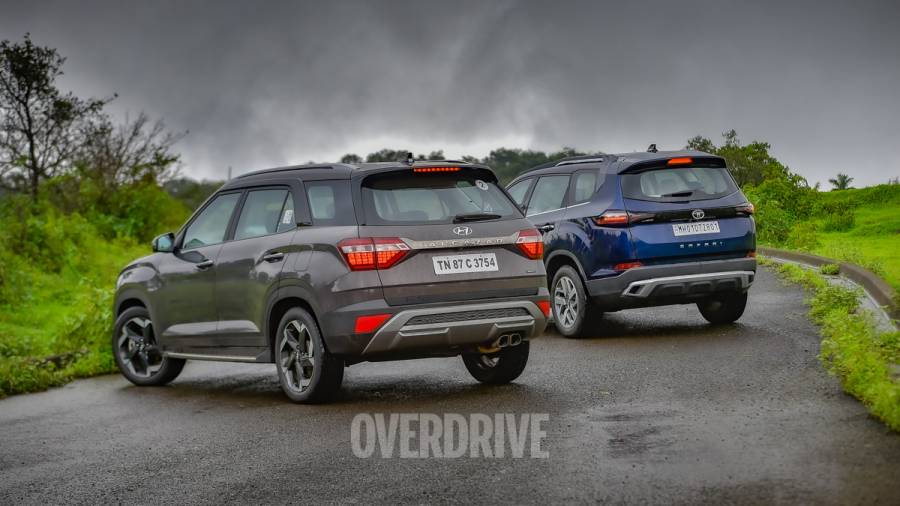 Priced at Rs 24.35 lakh for the top-spec diesel here, the Hyundai Alcazar is a significant Rs 2 lakh less than the equivalent Safari at Rs 26.35 lakh. That's quite a deal given the immense features the Hyundai packs, the better luggage space and more manageable dimensions. In fact, if you planning on using your three-row SUV primarily as a daily driver with the occasional family outing, this might be the better choice. But our pick would be the Tata Safari. It seems to fully maximize comfort for all passengers, especially in the second and third rows, and its dynamic ability seems to cover all situations that you might put it through. The Tata is more comfortable more of the time and there's no denying the massive presence that comes with the package.