The Hyundai Alcazar is by any measure an extension of the Creta. It stems from the same platform, employs largely the same engines, but there are differences. With a wheelbase that's been lengthened to accommodate a third row of seats in 6- or 7-seater configurations, its appeal extends to large families, ones with more than four members living together. That broadens the Alcazar's requirements, makes it more versatile, but with pricing stretching upwards of Rs 16 lakh, Hyundai have also positioned it in a premium space. Sacrificing base variants and leading consumers towards the top end variants is a gamble. Can it pay off? Initial reports suggest it just might pull it off, with Hyundai having captured over 4,000 bookings within a week at the time of this report being filed. Can it win the bet? We tested it to find out. 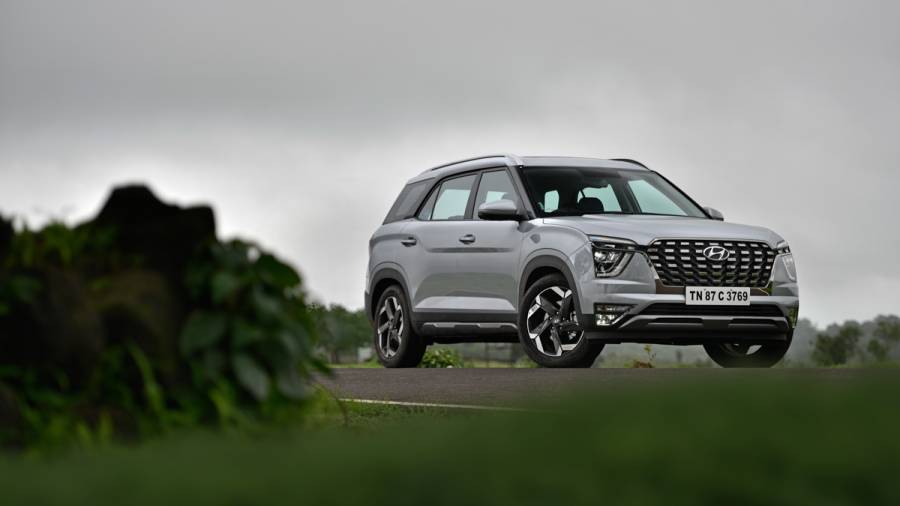 Hyundai has done a fairly good job of covering up the visual cues that could have identified the Alcazar as an extension of the Creta. The new cascading grille and the length of the Alcazar give it a fairly unique stance and visual impact. The only giveaways are the shape of the headlamps and its internal elements. Is it a good looking visual overall? 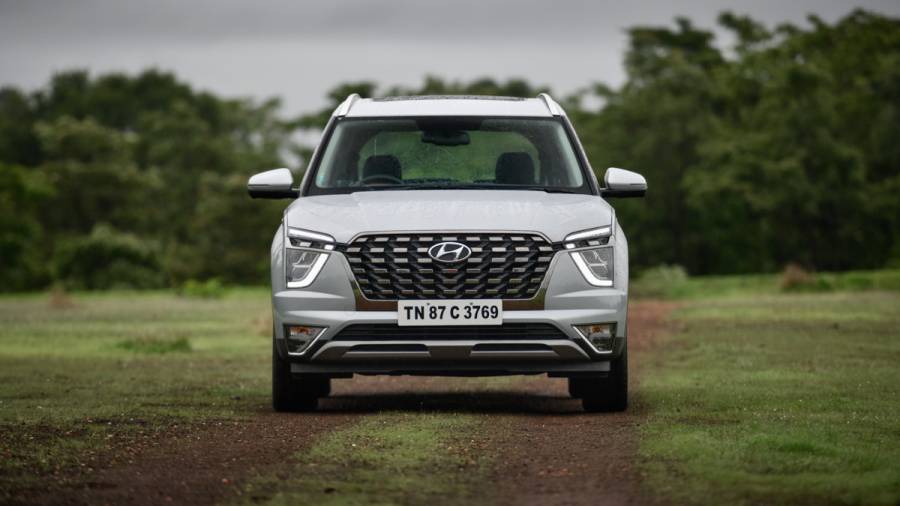 No. But there is something attractive about it that drew umpteen curious stares and over the shoulder glances from almost everyone who drove past it. Perhaps it's the length or the slightly taller height or those sensational alloys all of which combine to make this SUV look fuller and more valuable. 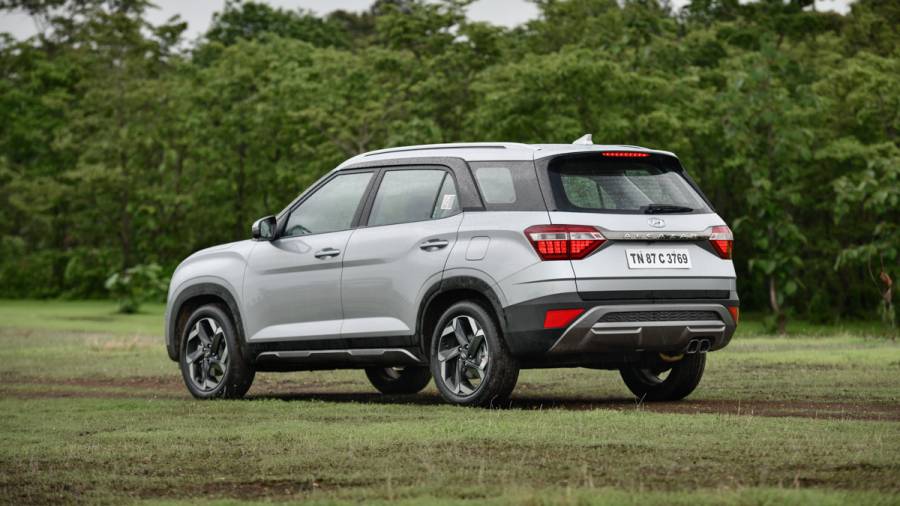 Inside the cabin the Alcazar is quite identical to the Creta and except for the three rows of seats and the brown and black colour combination on the upholstery, there is very little to distinguish between the two. 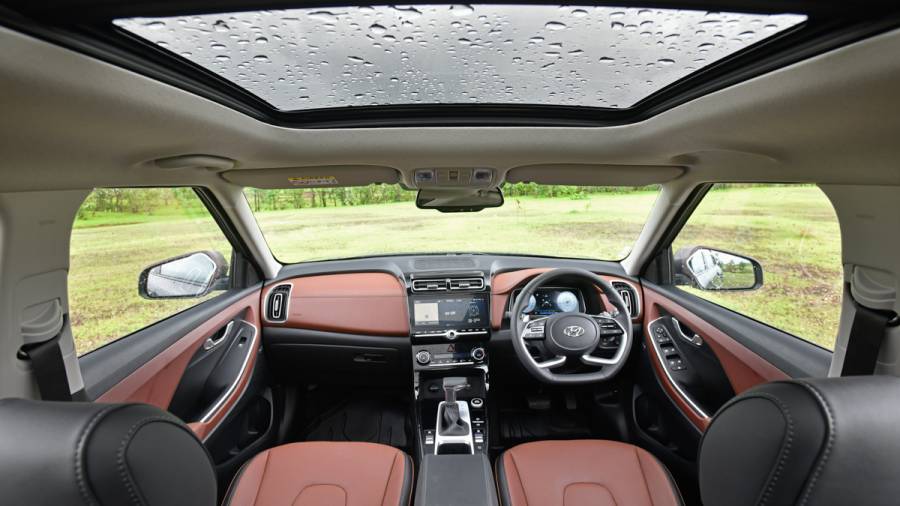 Having said that, the two-tone colour combination in the Alcazar works quite nicely. The shade of brown coupled with the smartly designed panels and the many devices make the cabin feel rich. The darker tones work better to disguise any dust or stains, and the surface textures and patterns imbued in the seats and on the dashboard look premium. 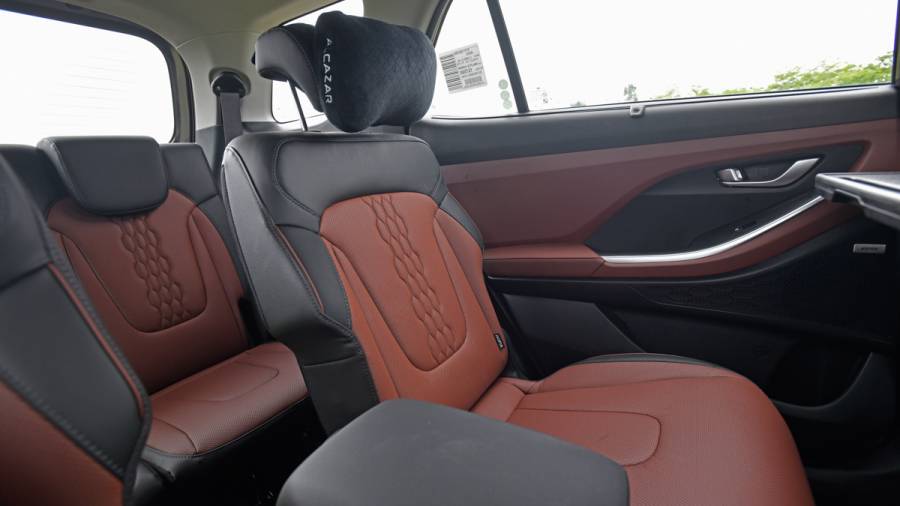 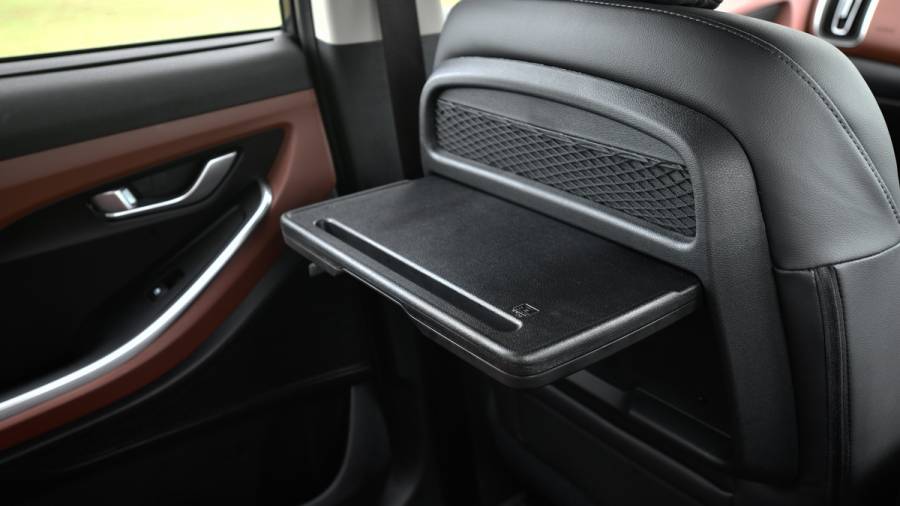 The thought process apparent from seeing the interiors is a bit mixed. On the one hand, Hyundai seems to be targeting the upwardly mobile executive through their 6-seater variant which has captain seats in the middle row. Their communication campaigns speak about the generous legroom for busy executives to stretch out in the adjustable lengthwise middle row or the presence of foldable tables to work on while being chauffeured around. Nothing wrong with that, though I'd warrant that imagery better suits the Creta. On the other hand Hyundai is also talking to the large families where three-rows of seats becomes imperative, since Indian families like to do everything together! So the first and second row can move forward or back, depending on the space requirement. Either ideology works, though I'd weigh in more towards the larger families part, since there is a demand coming in from that sort of consumer in this space. The passengers in that last row get their own cupholders, air-con vents with blower speed adjustments and high-speed USB charging points. It seats two young adults comfortably with just about enough under thigh support to make even long drives reasonably comfortable. The advantage here is that you don't necessarily sit with your knees perched high, so comfort is ensured over any journey. 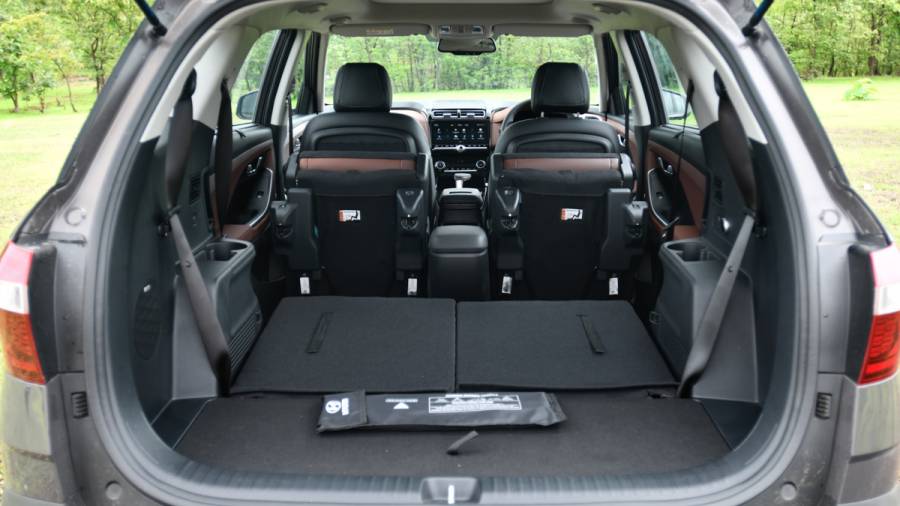 Folding both the second and third row is a fairly simple job, irrespective of whether you have the 6- or the 7-seater Alcazar. If you needed boot space, folding all those seats liberate way more room than you'd ever use more than once or twice in the vehicle's lifetime. 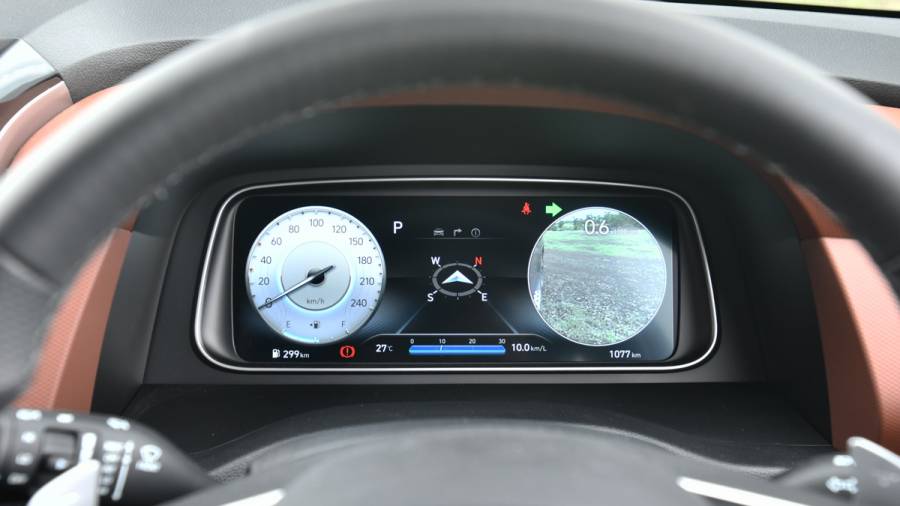 On the usefulness of this cabin, Hyundai scores pretty high marks, though the grading is not like their post service customer feedback where everything below a 9 on a scale of 10 is piss poor! I'd rate it a good 7 on 10, for both the way the space is managed and the features provided for all three rows of passengers. Where it loses out is in some basic areas that haven't been reengineered, such as the track. With the height and length increasing a more stable footprint could have been achieved by widening the track. This would have increased shoulder room for middle row occupants, and also given it a more stable footprint.

The Alcazar sits on a stretched chassis, which has a wheelbase 150mm longer than the Creta. This also increases the length of the Alcazar by nearly 200mm. The Alcazar also sits on 215/60 R17 tyres which is the standard size, though top end trims sit on 215/55 R18 tyres/wheels. This lends the top end trim with slightly higher ground clearance though Hyundai haven't disclosed these figures. 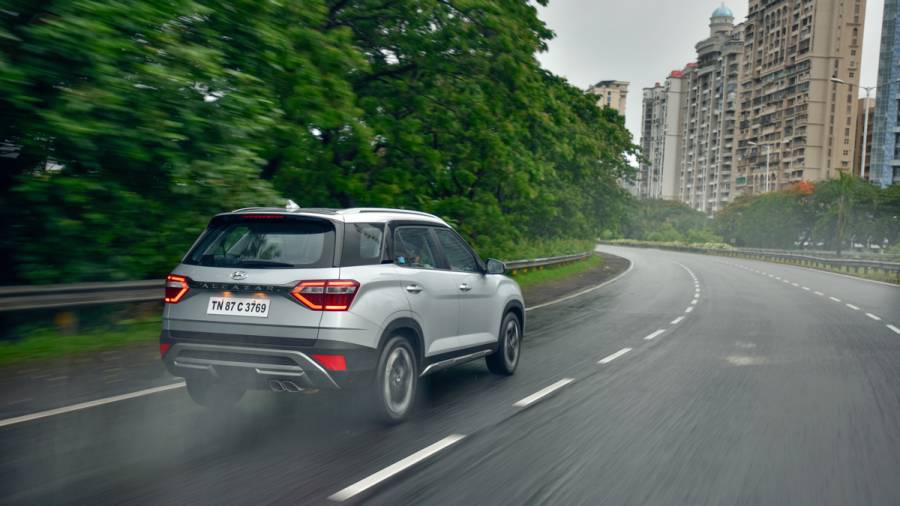 The suspension, both front and rear have also been reworked to manage the additional loads. It still uses the McPherson struts at the front coupled with a torsion beam at the rear though these have been tweaked with slightly longer travel and stiffer damping to compensate for the loads. A hydraulic rebound stopper has been used in the front strut for better rebound control  while at the rear the dampers sit more upright to give it a more planted feel. Ride quality is comfortable, though across some expansion joints or potholes you do end up hitting the bump stops as there is limited travel on the shock absorbers. What I do like however is that even with the length of the vehicle extended and sitting alone in the car, the rear end never felt tail happy or bouncy. In that way, it feels stable and  composed though there is a little body roll because of the increase in height. Even the steering has been retuned to provide a more linear torque feel to enable better manoeuvrability in urban areas. It does feel light though the weight  balance between driving it in urban areas and on highways does not change much. I would have liked it to feel a bit more heavier as speeds increased on the highway. There is an electronic feel to it, and a bit of vagueness common to all electronically powered steering systems. The automatic variants also get the drive mode selector which shifts been maps to alter the steering effort, something the manual I drove does not get.

In an effort to place the Alcazar apart from the Creta, Hyundai have also given its powertrains a slight twist. You get a petrol and diesel option, but the petrol is not the same powering the Creta. Instead what you get is the third-generation Nu engine borrowed from the Tuscon but heavily upgraded to deliver more power and better performance. The petrol displaces 1,999cc and outputs 159PS of max power at 6,500rpm with 191Nm of max torque at 4,500rpm. Having optimised the heat management module, the continuously variable valve timing and the power consumed by the variable oil pump has helped Hyundai bump up power in the Tuscon unit by 7PS for use in the Alcazar. The diesel variant I drove is the 1.5-litre direct injection turbocharged oil burner that belongs to the U2 family of Hyundai diesels, and is also shared with the Creta. A lean NOx trap and a diesel particulate filter take care of the emissions and a VGT takes care of low rpm turbo lag in this engine. This engine makes a 115Ps of max power at 4,000rpm, but an enormous 250Nm of torque between 1,500-2,750rpm. 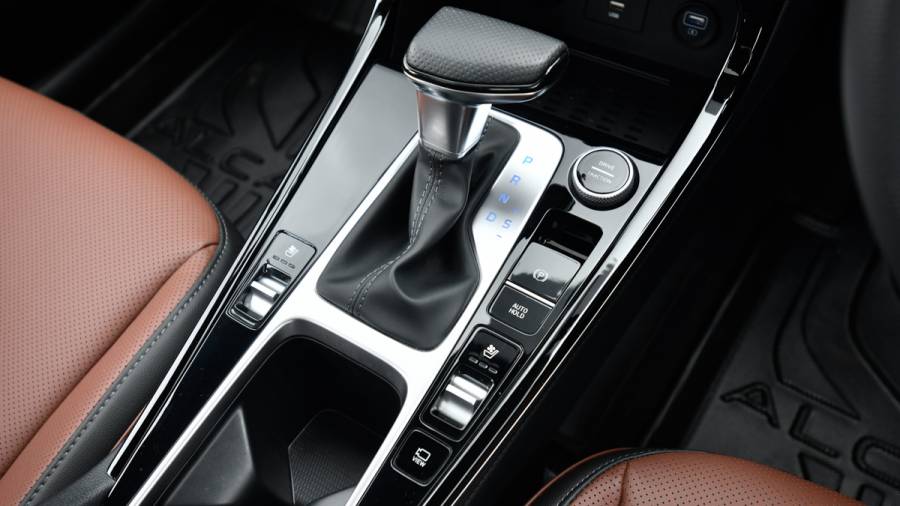 You can opt for either a 6-speed manual or a 6-speed automatic. Both transmissions have been optimised to reduce frictional losses and thereby improve fuel efficiency. In the manual, the final drive ratio has been increased to achieve a balance between fuel efficiency and performance. The diesel manual is surprisingly quiet and refined, and with the torque coming in as early as 1,500rpm you get some sweet bursts of acceleration in the mid-range. Even if you have to call on the power while overtaking, simply drop a gear to put the Alcazar in the powerband's sweet spot and hit the throttle. At the lower end though, it does have a little bit of lag. I presume low end torque has been sacrificed in the effort to balance fuel efficiency and drivability. So while you get fantastic drivability in urban areas, our acceleration tests showed the Alcazar hitting the tonne from standstill in around 13.3 seconds. Our tests were in slightly damp conditions, and perhaps in absolutely dry conditions the acceleration numbers may improve. On our fuel efficiency runs we achieved a best highway figure of 18.8kmpl with the Alcazar returning a city figure of 14.6kmpl. On the other hand, the Alcazar petrol AT which we also tested managed the 0-100kmph dash in 10.6s, was much quicker in our roll-on (kickdown) acceleration tests, and returned an overall 12kmpl efficiency figure.

The Hyundai Alcazar is just that little bit more competent than the Creta. If you were asked to choose between the two, I'd recommend the Alcazar in a heartbeat. It is more practical, has better features, more space, diverse seating options, has a good range of powertrains and is comfortable and safe. Though I do think Hyundai should have extended its safety net of front and side airbags across all variants instead of just the top trims. 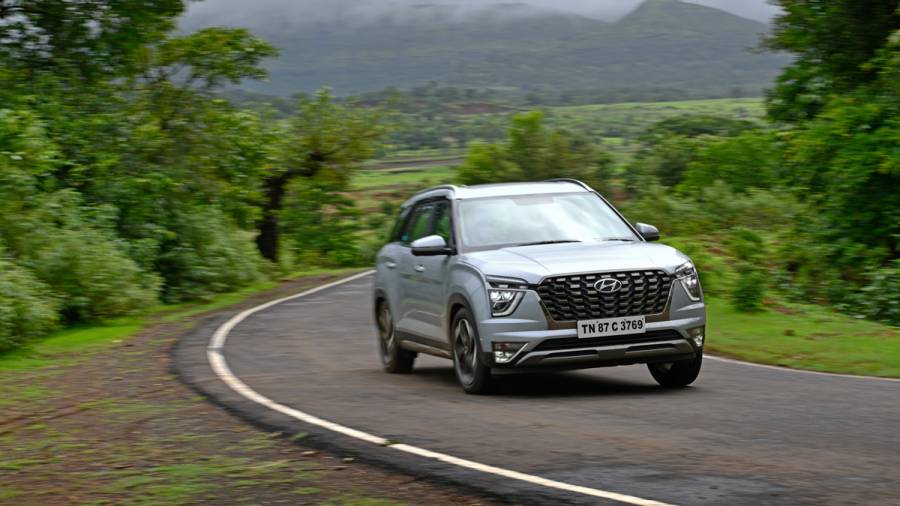 In light of pricing too the strategy is sound and you get good value with any variant, though I do feel Hyundai could have added more consumers to its flock had it added an even more affordable base variant to the mix. Perhaps that also means there is something else brewing for consumers in those segments. That aside, those looking at the Hyundai Alcazar keenly won't be disappointed with the package. My recommendation would be the petrol automatic.

Watch our road test review of the Hyundai Alcazar below: 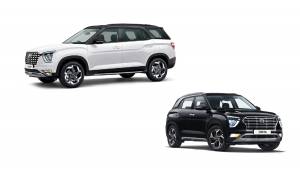