We always knew there was going to be a three-row Harrier, Tata Motors made sure of that with the showings at Geneva and then at the Auto Expo. But what we didn't know was that this was in fact the new Safari. An inspired move no doubt, but one that brings with it the sentimentality and expectations associated with a well-remembered name. So now this needs to be not just a good SUV but a good Safari. A cakewalk or do the trappings of lineage hold it back? 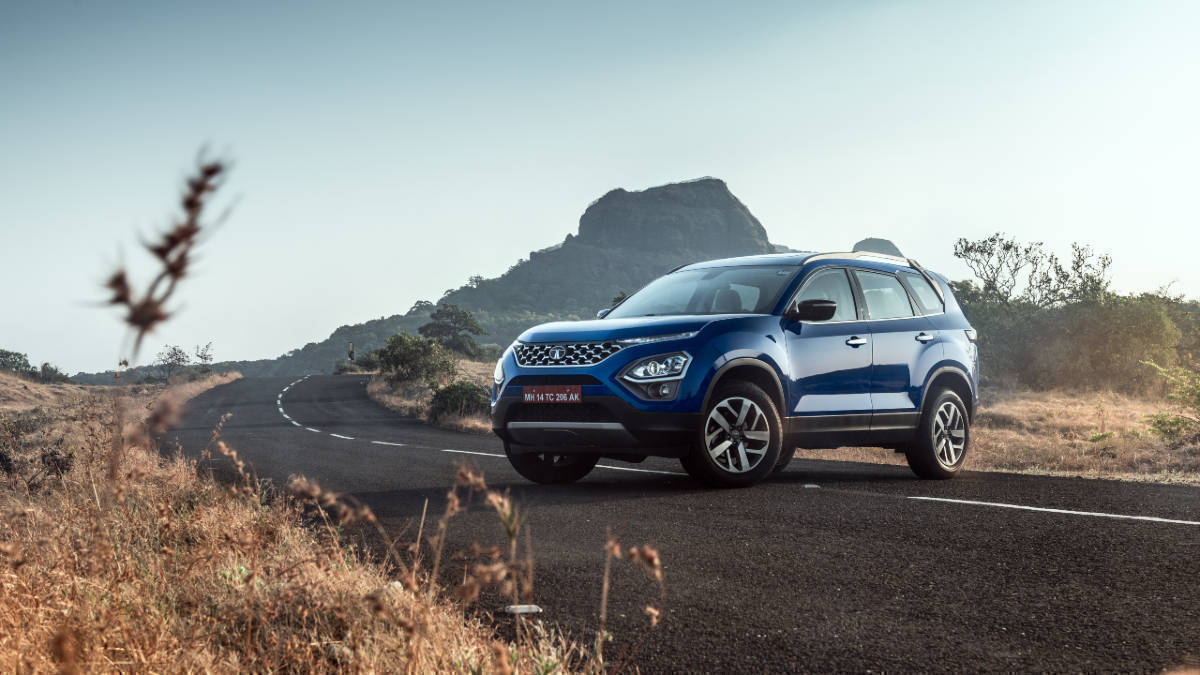 Look at the new Safari straight on and you'll need a discerning automotive eye to separate it from the Harrier. The grille is now finished in brushed silver with Tata Motors' new tri-arrow motifs highlighted in chrome. There's some more chrome around the carried-over split headlamps. These changes are well-integrated and don't necessarily feel overdone. Although we prefer the more subdued arrangement in the Harrier, a section of the new Safari's buyers will appreciate the added presence these changes bring.

Things remain largely untouched till the C-pillar. So you have the same bold shapes and hefty haunches of the donor car. Larger 18-inch wheels have been added here for more effect, which carry over the same two-tone design as seen on the BSVI Harrier's 17-inchers. 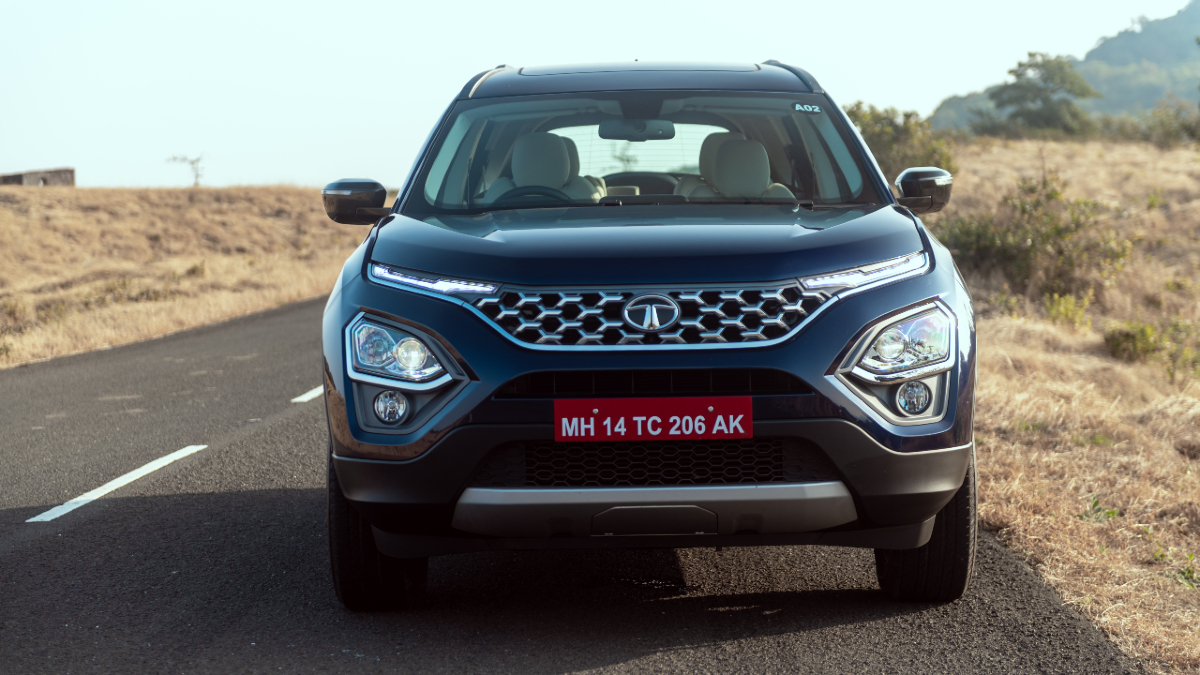 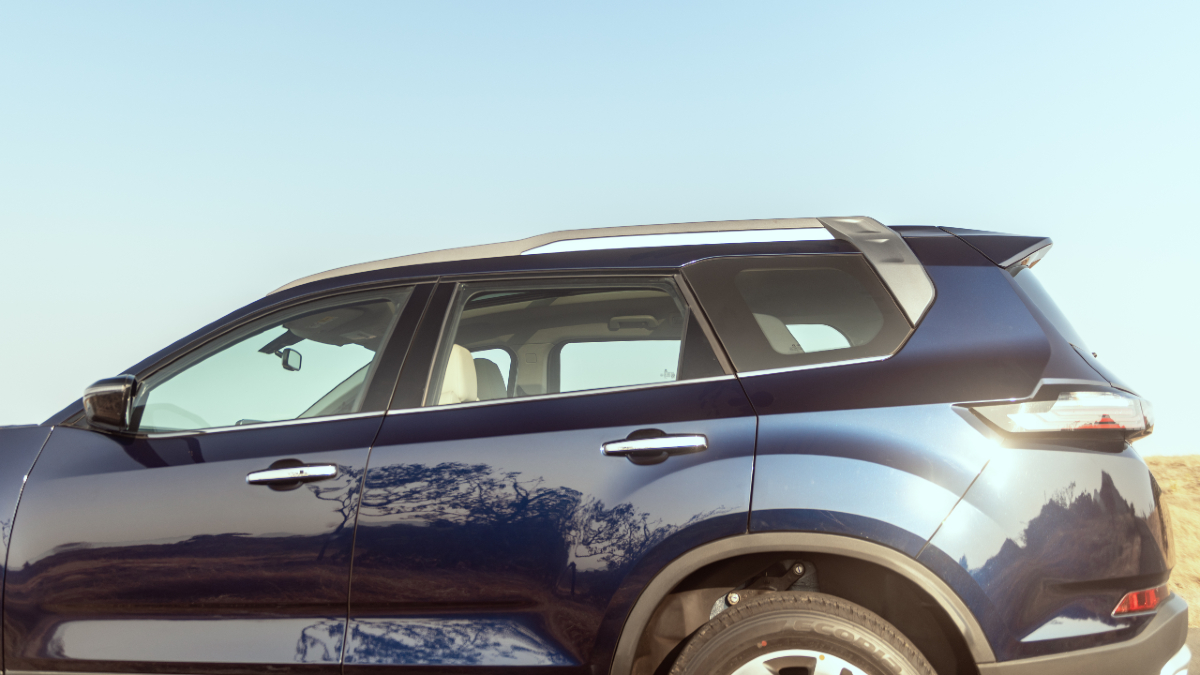 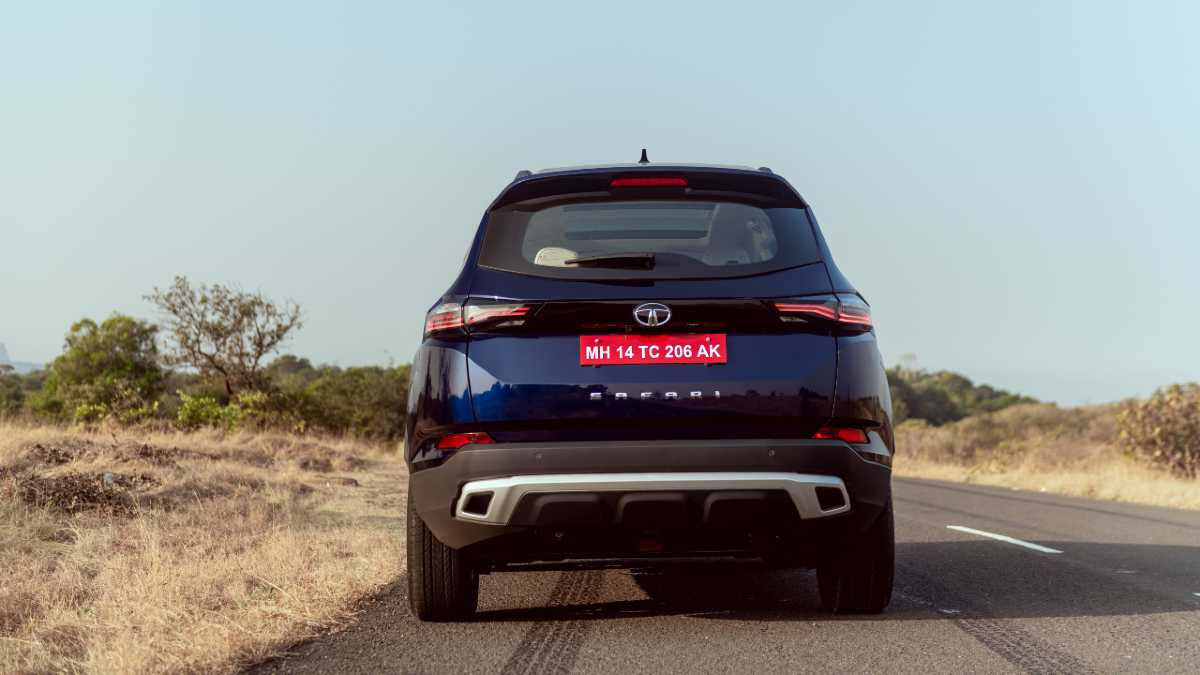 Tata Motors makes some attractive cars these days and this design prowess is quite apparent in how the 60mm longer rear overhang for the third-row has been incorporated into the Safari, obviously helped by the modularity of the Land Rover-derived OMEGArc monocoque structure. So the sloping roofline of the Harrier has been replaced by a flat stepped roof in a nod to the original Safari, although the panoramic sunroof-equipped version uses a rising roof panel to incorporate the glass. These versions also get only an ornamental roofrail for the stepped effect while other Safaris can be fitted with carriers and have a weight rating of 130kg.

This more functional theme is carried on by the rest of the rear section. We liked the silver design element that drops from the roof, it reduces the heft around the thick D-pillar and the quite large quarter glass. The part-LED tailamps are now of a flatter design, joined by a widened gloss-black panel on the more upright boot. The auxiliary fog lamps are new as well while the rear bumper carries some neat boxed arrangements to further break what would have been a monotonous look. Quite a departure from the squat look of the Harrier's rear but one that still makes the Safari one of the better looking SUVs in its price range, even if it isn't immediately recognizable as a Safari. 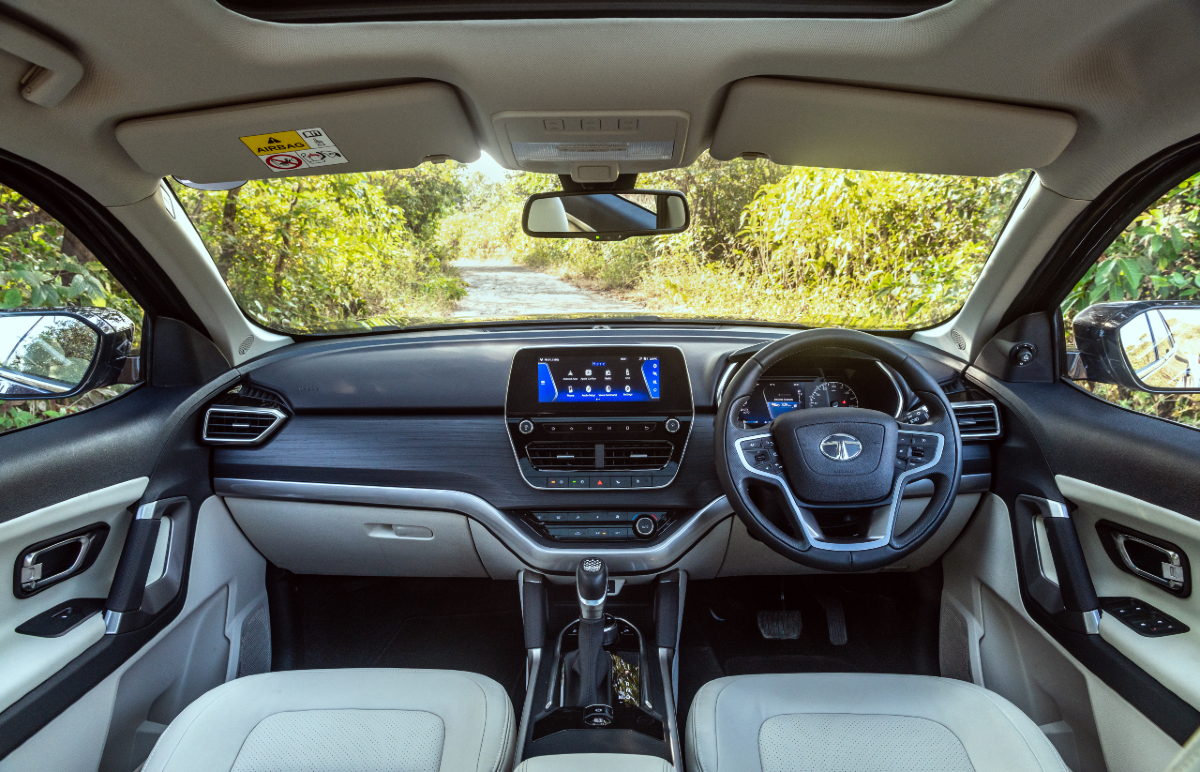 One of the main pillars on which the original Safari built its reputation was the sense of space and comfort in its cabin. Tata Motors has addressed that quite well we think, with the Harrier being the starting point. The brown wood and tan upholstery of the Harrier has been replaced by an off-white upholstery and dark ash wood dash trim. The white upholstery is going to take some maintenance but it has added to the sense of space in the already large cabin, the new wood trim also looks more genuine than the one in the Harrier. The dash design has been lifted from the Harrier and uses the same materials, but the level of fit and finish has improved by some margin. The switches feel a bit more tactile than before and we couldn't find many ill-fitted panels. The newly added ambient lighting adds to this improved sense of quality further. 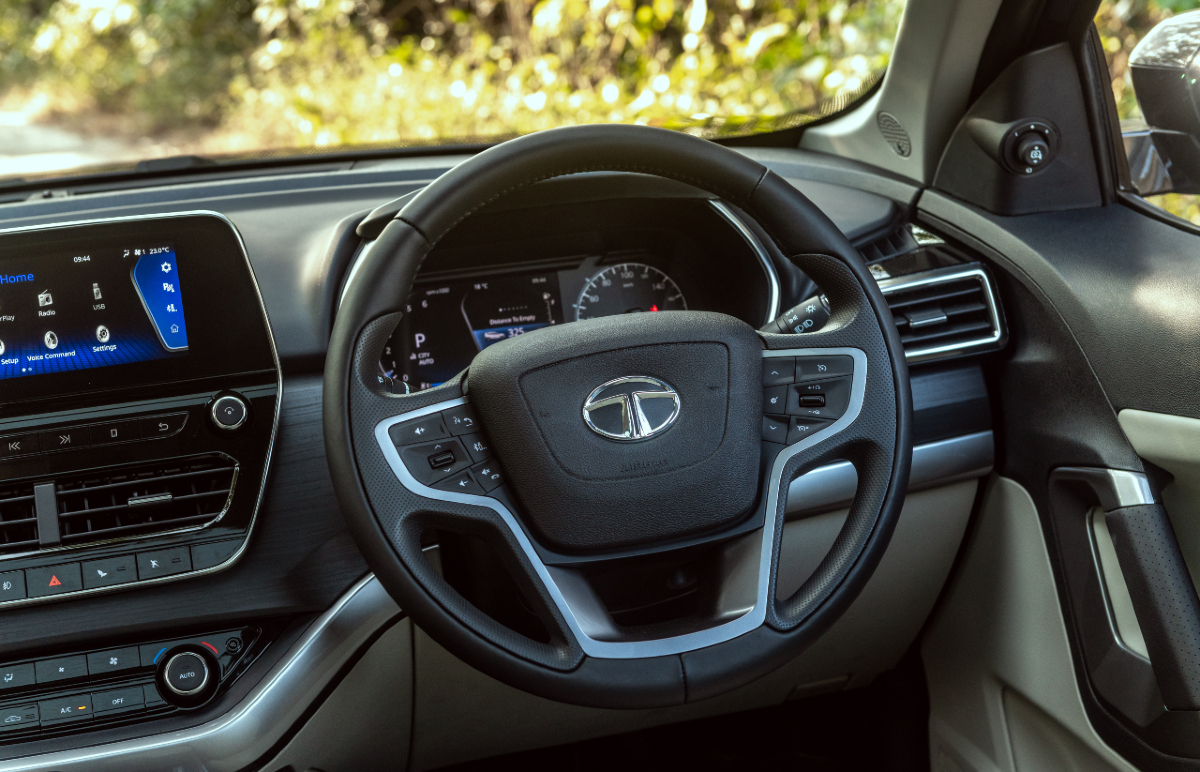 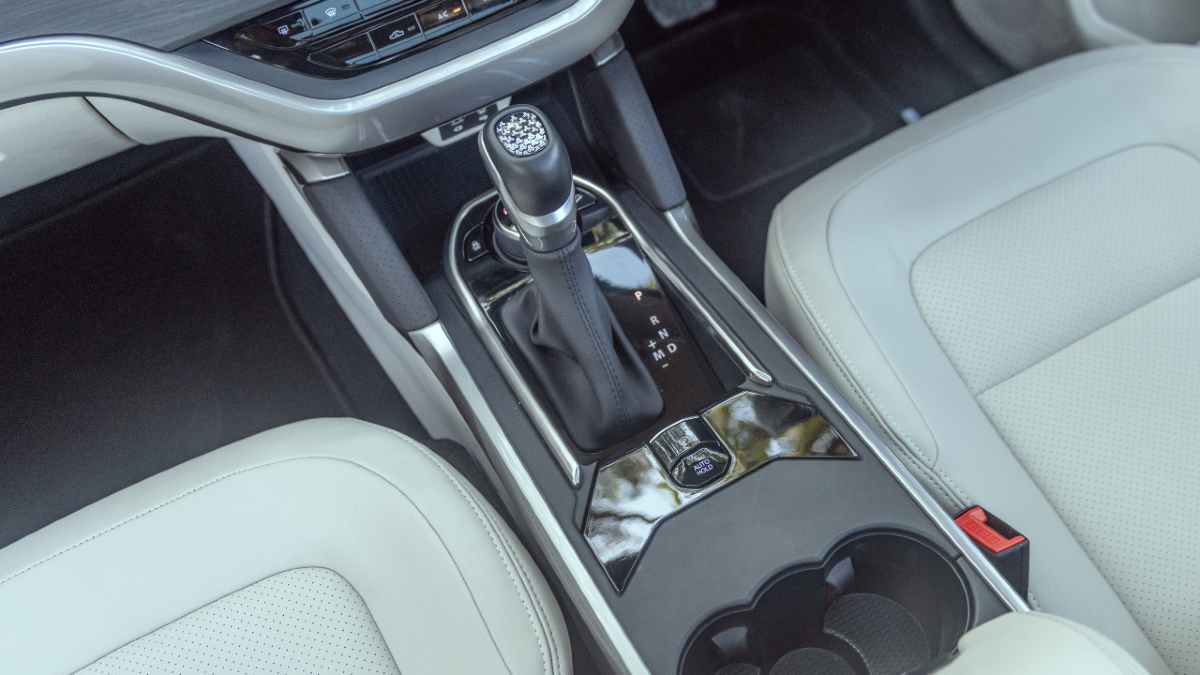 Other than this, the good and the not so good remain as they were for front passengers. So we like the tucked in driving position and the low window sill which seems to give you both - a better sense of control and good visibility. Thankfully, the uncomfortable aircraft-style handbrake has been replaced by an electronic one that also incorporates an auto-hold function. The 8.8-inch touchscreen and the 7-inch digital instrumentation continue unchanged, and so our reservations with the layout and interface of these units remain as they were. Other than what came to the Harrier with its BSVI update, the Safari adds iRA connected car tech and TPMS. Now you wouldn't call the Safari under-equipped but the segment that it wants to compete in offers some of the best-equipped cars at any price range in India. We feel the lack of wireless charging, a better resolved 360-degree camera and wireless phone mirroring is something Tata Motors should have addressed. 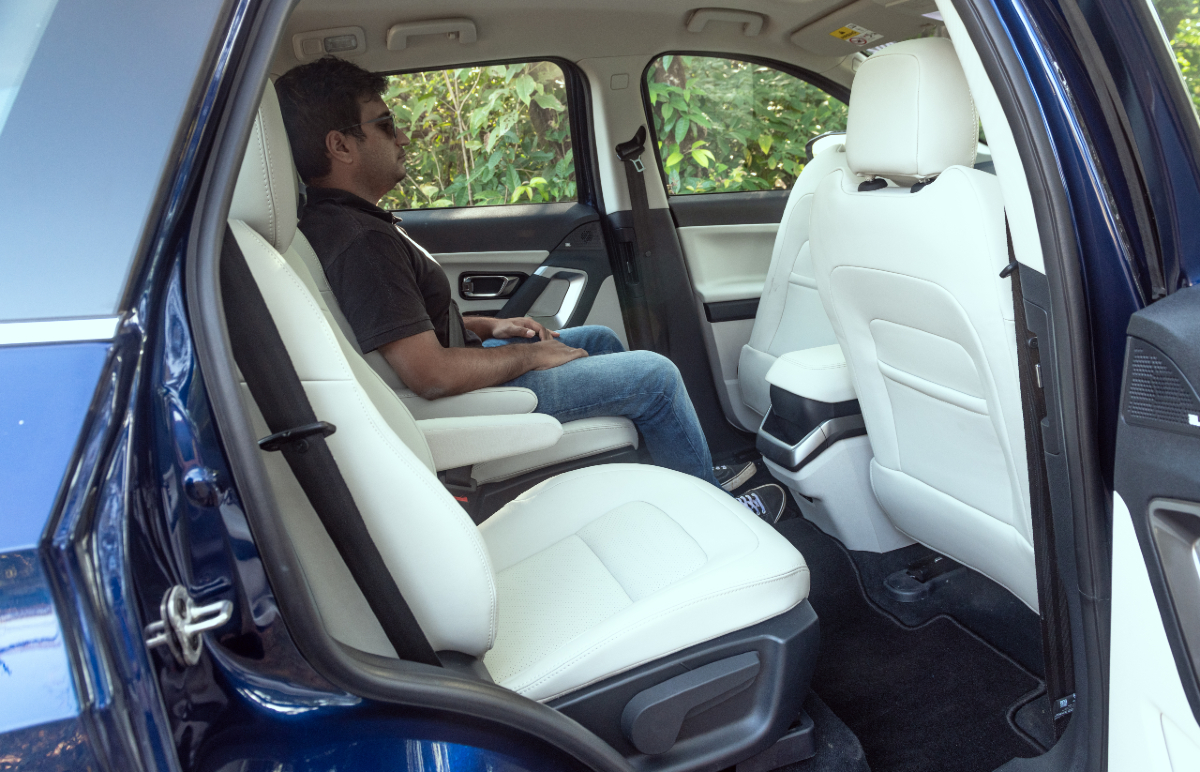 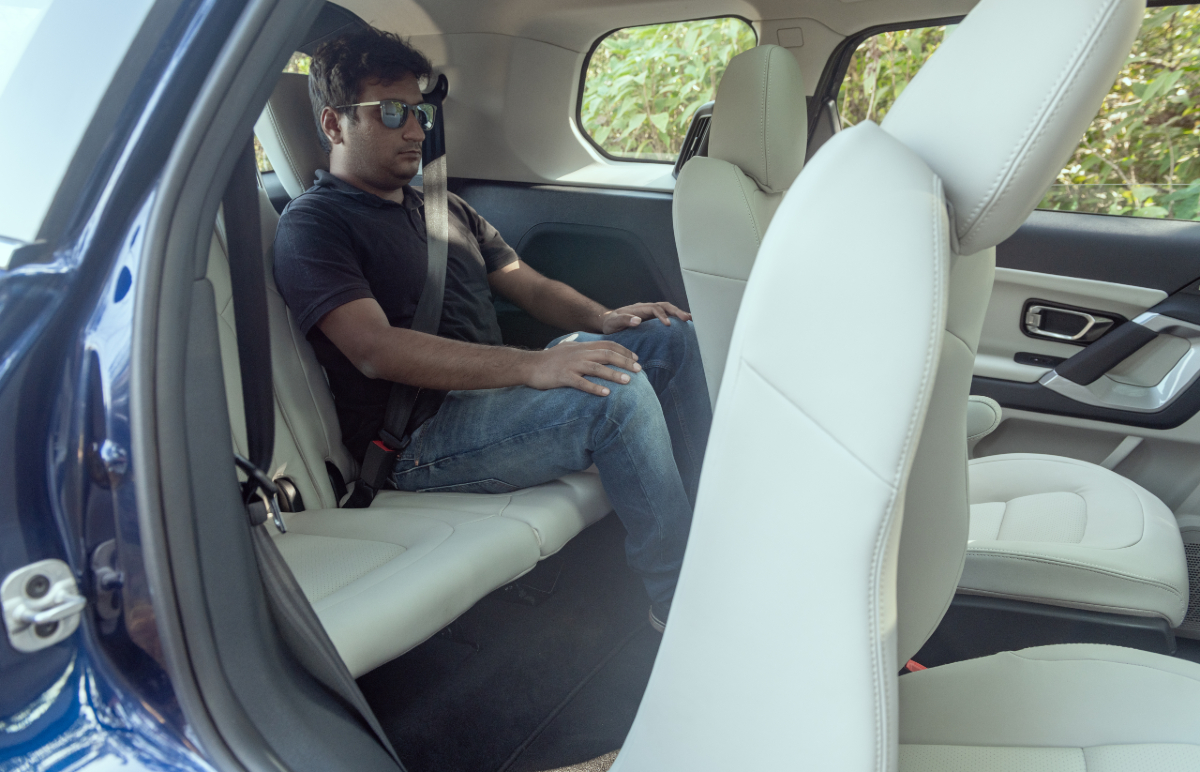 But these misses are largely forgotten once you step into the second row, available as a bench or in this new captain seat configuration. The seats are very similar to those in the front with the same impressive contouring, under-thigh support and cushioning. The chairs can be slid or reclined, and there's even a mechanism to slide forward the front passenger seat, so legroom is unlikely to be a problem at all. This row is set a tad higher than the first just like in the original Safari, which combined with the large windows and full-sized panoramic sunroof, makes for possibly the most inviting second row of any car below Rs 25 lakh.

In the third row, you realize that the longer rear overhang and 80mm height increase with the Safari have been put to good use. There's enough here for two average-sized adults to be comfortable over at least shorter trips, helped by the sense of space the carved-out roof and the large windows offer. The seats aren't set too low so you aren't crouched in but under-thigh support is always rare in these arrangements and that's no different here. There's even a reasonable amount of legroom although foot space is compromised by the wheel arches. The individual blower controls and USB ports are some more thoughtful touches here. 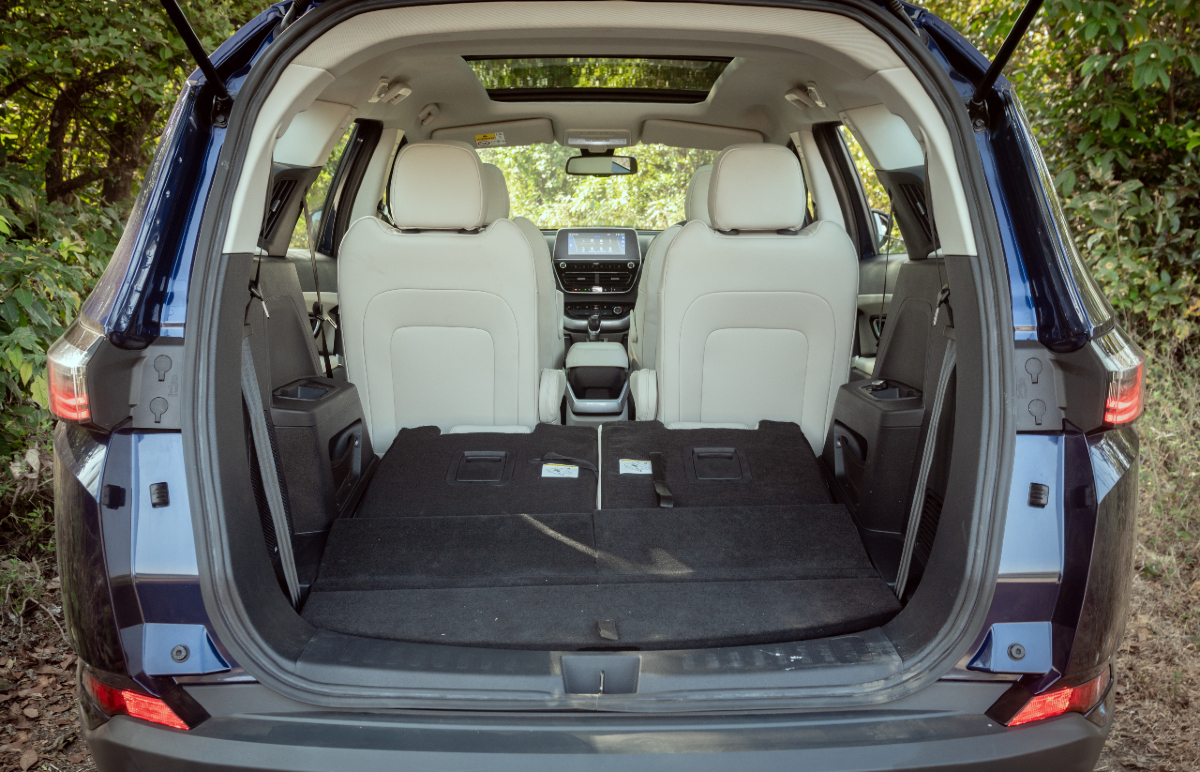 There's not much luggage space with the third row up(73l), but these fold away without much effort to free up 447 litres. But the bench seat version is the one to get if you want to maximise practicality. These fold flat too, unlike the captain seats, bringing luggage space to 997 litres. Ingress and egress to the third row is much easier with this version as well, the captain seats don't tumble forward to allow access to the last row. Seating aside, the cabin is peppered with large storage spaces and USB ports for all passengers. The Safari is mechanically identical to the Harrier, and feels as such on the move. There has been some retuning of the steering and suspension setup to account for the 70 kg weight increase over the 5-seater, but this hasn't fundamentally altered the driving experience.

So the 170PS and 350 Nm FCA-sourced 2.0-litre diesel is as competent a motor as in any of its other applications, even though it is quite vocal at city speeds. The motor is largely vibration-free and offers up a flat wave of torque from just below 2,000 rpm, so this 1,800+ kg SUV feels alert in most situations. The Hyundai-sourced six-speed auto has a hand at making the Safari feel this way, it's tuned to the same gear ratios as the Harrier, and is largely unintrusive as long as you don't ask for heavy-footed kickdowns, where there are some hesitant downshifts. But the sport mode dials this anomaly away quite easily. It's best to just leave the Safari in the sport drive mode we think. You get the full 350 Nm torque output only in this setting, otherwise limited to 280 Nm in Eco and 320 Nm in the default City mode which dulls the drivetrain's responsiveness to an extent, especially with power petering off after 4,000rpm. A concern is the gearbox's tendency to start freewheeling off-throttle. This may improve efficiency but it also makes progress on a downhill section trickier than it needs to be. 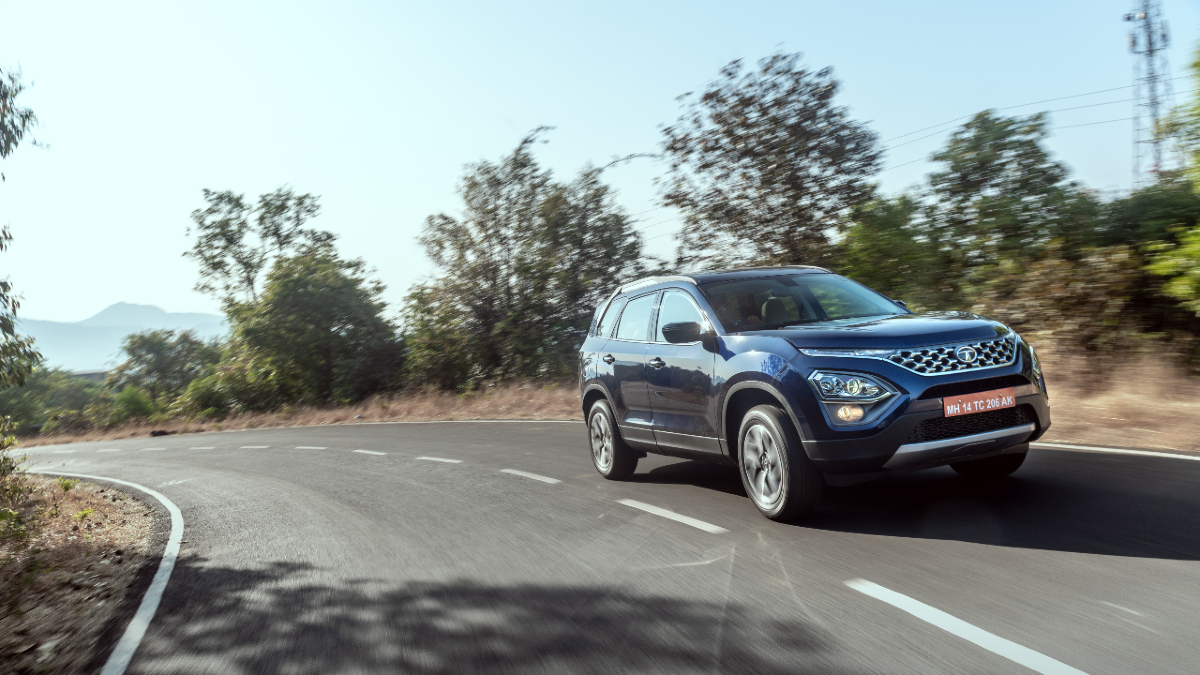 The hydraulic steering setup feels somewhat counterintuitive. It's hefty enough at low speeds to make parking a chore, settling into lightness that makes progress in city traffic effortless but not quite weighing up enough for highway cruising. There's also some kickback over sharp bumps and occasional torque steer under hard acceleration, taking away from the SUV's otherwise impressive high-speed stability. It stays well poised at speed and brings with it a sense of solidity that's becoming a recurring theme on Tata's newer offerings. Aside from some pitch while accelerating hard, the suspension setup soaks up bumps and imperfections very well at speed. The larger wheels haven't affected this trait much, but the Safari could do better at tackling patched road surfaces and ruts in the city. There's an element of firmness here that only fades away as speeds build.

For its dimensions, the Safari is quite adept at negotiating a series of bends. You're always aware of its girth but body movements are progressive and the nose tucks in quite easily, so you and your passengers won't be moved around in their seats too uncomfortably. But again the steering is the limiting factor here, its lightness and quickness never let you confidently exploit these positives. The switch to rear disc brakes is a great move, and while there's not much feel from the pedal, the actual braking performance is linear and much improved from the Harrier. Further, a set of ESC-based terrain modes are on offer, but with no AWD the Safari is at best a good softroader. 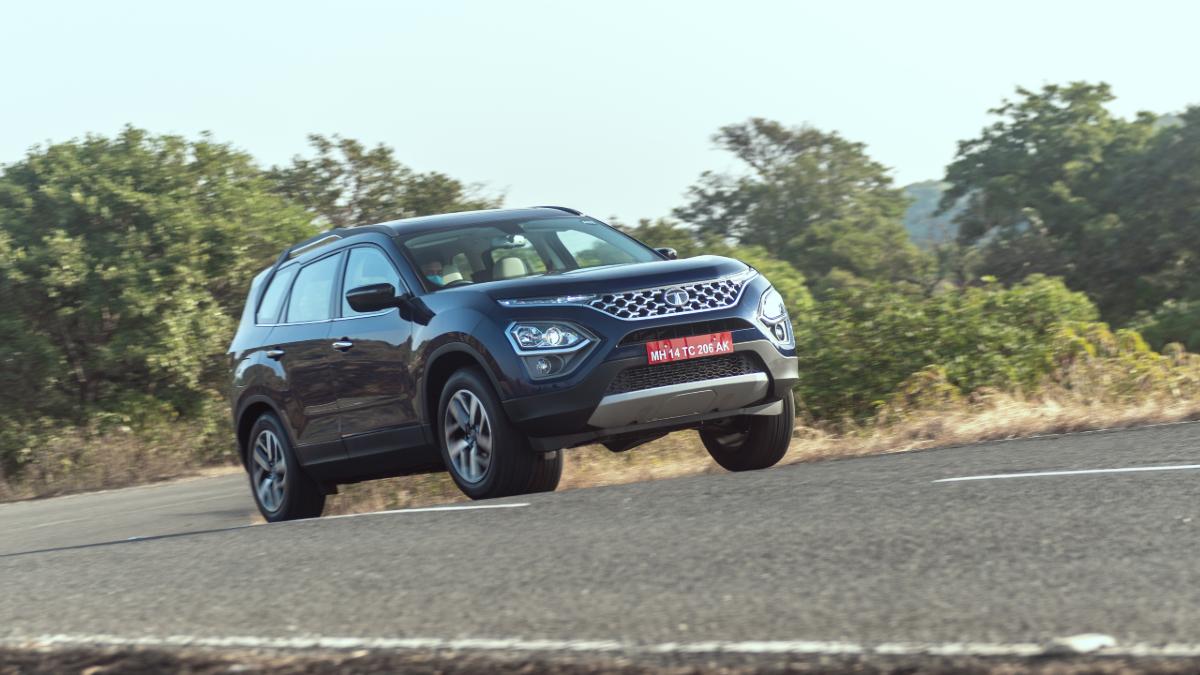 We also managed a short spin in the manual Safari. The ride and handling character is very similar to the auto but we found the engine to be a bit more eager, unshackled from the torque converter. As for the manual gearbox, its an FCA-derived unit that offers crisp throws although the long-travel clutch can get tiring in heavy traffic. The automatic is a better-rounded drivetrain given how the Safari will be used.

So is this a great Safari? We aren't entirely convinced. Some of the original's traits like the stepped roof and comforting cabin have been realized in this reboot. But the lack of a 4x4 system in the interests of managing costs, a crucial addition that made the original so versatile to begin with, is unfortunate. Especially when this Land Rover architecture is perfectly capable of accommodating one. With this being the new flagship, a unique front-end inspired by the original would have helped make a more direct connection too. We've seen Tata Motors do this with the Sierra concept and a similar take here would have gone a long way.

And what of it as a seven-seater SUV? In the larger scheme of things, the new Safari is a compelling buy in the price point it is expected to come in at(approx Rs 1-1.5 lakh over the Harrier). It's got the presence, space and comfort of very few cars in this segment, and aside from some shortcomings in features and dynamic tuning, will be a fulfilling car to live with whether you use it as a roadtrip machine or a city car. 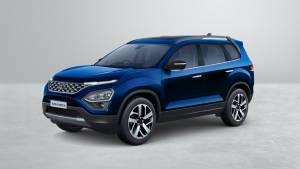 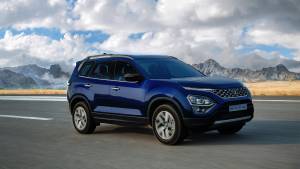 2021 Tata Safari unveiled in India ahead of...
Advertisement