This is such a simple comparison. Buy a scooter and your pants will not get muddied as easily as on a motorcycle in the rains. If you like your pants enough, the three monsoon months are enough motivation to look at scooters alone. That's all, shows over, bye bye.

But it isn't that simple. Motorcycles and scooter are wildly different in role and engineering. Scooters â" especially the way we know them in India â" are urban creatures. Meant for short trips about town, convenience of operation and to offer utility - storage space under seat and on the floorboard.

Motorcycles have a narrower focus â" they get people and only a little bit of their luggage from point A to point B, and most of the time, the larger the displacement of the engine, the farther apart A and B can be without causing undue hardship. If you need to carry luggage, even a shopping bag with a kilo of potatoes, you either hack up a solution â" like hang it off the handlebar and corrupt directional accuracy â" or invest in a solution â" like a backpack, or tank bag.

Scooters have small wheels. So ride quality cannot match motorcycles â" big wheels deflect less over bumps and offer greater stability. In this sense, no matter what your father says, motorcycles are safer than scooters. It's a big deal. But not abroad. The advantage motorcycles have in ride quality becomes less and less relevant as roads get better and better. And that will probably happen in India. Our roads are far from perfect but they slowly, steadily get better every year. There will come a tipping point where the ride quality will not figure in your purchase decision because in your town the roads will be good enough for it to not matter.

Then again, motorcycles are preferred load carriers in extra-urban situations. We don't condone this, but it holds an insight. A scooter would make sense. 200kg of onions on the floorboard, 200 on the rear seat with just enough space for 30kg more under the seat. But farmers prefer to load 200kg on the motorcycle instead. Why? Because the smaller wheels and the naturally top-heavy stance of the scooter would make it unrideable with this load, but a motorcycle can and (unfortunately does) survive this role prostitution.

Now look at the ergonomics. The motorcycle has higher handlebars, while the scooter has a lower one. It's about the role. The scooter needs to handle shorter trips so this ergonomics package works. On a significantly longer commute, the lower handlebar wouldn't work quite as nicely. Trust me, I know. I have traversed the Mumbai-Pune highway â" about 180km each way â" repeatedly on both bike and scooter. It can be done but the bike always feels more at home, safer and has the performance to make me feel safe in fast traffic. Scooters come into their own when I reach Pune, for example, and I have to negotiate heavy traffic â" you really appreciate the twist 'n' go ability when you're crawling along without a painful clutch hand, or sullied gearshift-side boot.

Now look to the European market scooters with 500cc engines like say the Yamaha T-Max. You'd be surprised how much like a motorcycle it is under the skin. The frame is nearly a full-on twin-spar while the wheels are as big as possible while keeping a low seat height. But the ergonomics look like a power cruiser (think Road Star Warrior) which makes it highway worthy. What it retains from (maxi) scooters is a large under seat cavity that can nearly host proper touring luggage in waterproof, lockable accommodations. And the powertrain layout.

In layout terms, scooters are always at a disadvantage because the floorboard and apron force the engine further back in the design. So the front-ends are always lighter and this means handling cannot be as sharp as a motorcycle. Mass centralisation is far harder to deal with on a scooter.

Shumi would say you should prefer motorcycles for the most simple of reasons. Motorcycles are more fun, they have a wider ability in terms of handling the city as well as going down the highway and most crucially, big wheels mean cornering is great fun. I've commuted on scooters to college so I know that I've never had to struggle with rain pants in the parking lot during the rains. A light jacket on my back and my college bag on the floorboard and I'm a cool commuter. I'd also think that most Indian womenswear tends to favour scooters rather than motorcycles. So whether riding is a pleasure or not, women will always tend to prefer scooters, unless we get motorcycles with lower seat heights or they all move on to wearing pants.

In the old days, this was simpler. The distinction between motorcycles, like the Jawa or Enfield and scooters like the Lambretta or Chetak was crystal clear. Like the white and black colours of our test bikes. They were dramatically different in price and in nature.

I rode the Swish and Slingshot in Pune to figure this out and as soon as the rain started, I completely ruined my denims about halfway up my shins on the motorcycle. I then noted that everyone seemed to have zip tied a giant cardboard splatter guard on their crash guards to prevent exactly this. This being an air-cooled engine it's probably better for the pants than for the engine. In stock form, I immediately appreciated the sweeter ride quality of the motorcycle and the alertness of the chassis that the bigger wheels and more sorted handling bring to motorcycles.

But when I hopped on to the Swish I realised that shifting gears in crawling urban traffic is a waste of effort and progress is almost exactly as quick, not slower as the test data would suggest. My feet stayed out of the muck and the scooter itself emerged from the showers and mud looking vastly less splattered than the motorcycle. Which is time saved cleaning it before heading to work or college in the morning. I also noted that my backpack felt much lighter when it rested on the floorboard of the Swish than when I wore it on my back on the Slingshot. So, how to reach a decision? I would start with the distance of the commute. If you're commuting from, say Thane to downtown Mumbai, well over 40km one way, over some fast roads and some congested stuff, motorcycles make more sense. They feel more secure and are more comfortable over these longer in-saddle minutes. Anything up to 20km can be handled on scooters but the advantage for the smaller wheelers grows if the roads are more congested over this distance â" in terms of no gearshifts needed as well as in terms of not having to bear the weight of your luggage. Over longer distances, the superior economy of the motorcycle will also have a bit of a role to play in this matter.

If the odd highway trip is on your menu, then of course, you have to get a motorcycle. Until such time that we get a 250cc scooter that will cruise at nearly 100kmph and be able to pass traffic smoothly and easily. Higher speeds will naturally bring better dynamics but on scooters this usually also means stiffer suspension and hence worse ride quality. Not a bad thing on great roads but a potential deal breaker on our roads. And till these scooters arrive, motorcycles will always be more fun to ride, a big one in our books.

And finally, the rains. They appear to be the obvious reason to buy scooters in places like Mumbai where the rains last a full, unabated three months and the roads get mucky like heck. Scooters do make sense from the cleanliness point of view here though bikes are more stable in slippery conditions. But it is a matter of one quarter of the year at the end of the day. And a matter of your concern for your trousers. I believe the day this comparison leans automatically towards scooters will come â" and not because of global warming and changing weather patterns either. But today is not that day. 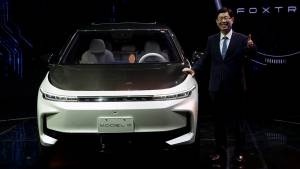 Foxconn announce the introduction of 2 cars...

Grab the Bull by the Horns: Lamborghini Urus...
Advertisement