Taking a very commanding lights-to-flag win at Melbourne was something that clearly was just an indicator of what Lewis Hamilton intended to do the rest of the 2015 season. Following similar success at the Chinese GP, Hamilton had another inch perfect race, winning under the floodlights at Bahrain. Following him home in second place was Kimi Raikkonen, taking his first podium for Ferrari in the 2015 season, while Mercedes driver Nico Rosberg had to settle for third. 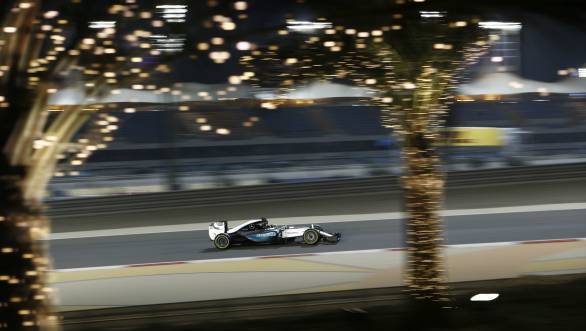 F1 2015: Hamilton's win under the floodlights at Bahrain see him increase his lead in the championship to 27 points

Even with Hamilton on pole though, there was some amount of readiness for a Ferrari resurgence given that the team had updates for Bahrain. And while Sebastian Vettel looked rather capable of challenging the Mercedes duo, he sustained front-wing damage, had to make an extra pitstop, and then wasn't able to recover to a podium position.

Over in the other Ferrari, the Iceman was able to slowly and steadily bridge the gap Rosberg. With the Ferrari on the medium compound and the Mercedes on the soft compound tyre, Raikkonen was able to eat away at the 16 second advantage that Rosberg had over him. Things weren't all too easy for Mercedes, though, with Rosberg's car suffering a brake failure on the penultimate lap, causing him to run wide and letting Kimi through to second place. With the brakes on Hamilton's car giving way on the last lap, it was a narrow win for Mercedes.

Valtteri Bottas took a fine fourth place for the Williams team, with Vettel finishing fifth. This means that Rosberg now moves up ahead of Vettel in the driver's championship. While Lewis Hamilton increases his lead at the head of the standings to 27 points.