For the second time in as many years Nico Rosberg stood on the top step of the podium at the Monaco Grand Prix. This time around, though, the significance of his victory was what mattered. Rosberg, in taking the win and the 25 points that go along with it, had managed to retake the lead in the battle for the 2014 Formula 1 championship title. One that he had lost at the Spanish Grand Prix to his team-mate Lewis Hamilton. 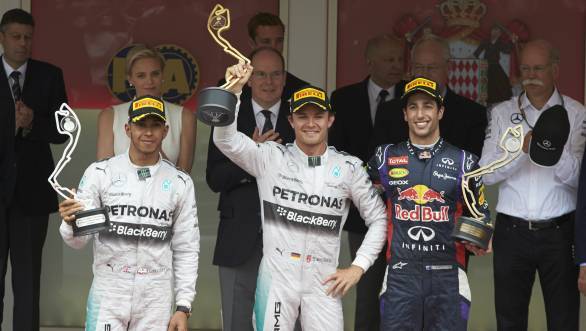 It was a rather disgruntled Hamilton who finished second to Rosberg, annoyed for more than just one reason. To begin with the paddock at Monaco was still abuzz with rumours of whether or not there had been foul play on Rosberg's part during qualifying - Nico had run wide, pulled into an escape route, then backed up onto the track once again, causing a yellow flag just when Hamilton was on his flying lap. Then there was the fact that the team decided to call both Mercedes drivers into the pits at the same time during the race, negating Hamilton's chances of jumping Nico for track position. Add to that the fact that Lewis managed to get some dirt stuck in his eye during the closing stages of the race and the 2008 world champion really wasn't having too good a weekend. He'd hinted at dealing with matters related to his team-mate the 'Senna' way after qualifying, later saying that he'd only been joking. End result though, it was Rosberg on the top step of the podium, with Hamilton second, just about holding off a hard charging Daniel Ricciardo in his Red Bull.

Fernando Alonso was the lone Ferrari who made it to the points, finishing fourth after a rather quiet race. Alonso's team-mate Kimi Raikkonen finished down in 12th place. While the Iceman was running in third place, an incident with Max Chilton resulted in a tyre puncture on the Ferrari, and the subsequent pitstop dropped him down the order. Then there was an incident with Kevin Magnussen that wedged the Ferrari and McLaren between the railings at the hairpin that saw Raikkonen drop further down the order.

Fifth place went to Sahara Force India's Nico Hulkenberg, who continued his impressive showing this season, taking his third fifth spot of the year. Something that is helping the team rack up points along the way, allowing them to maintain fourth spot in the championship standings ahead of McLaren. Although, there was something of a bright spot for the McLaren team when Jenson Button managed a sixth place finish at Monte Carlo, while Magnussen, in spite of the tussle with Raikkonen finished down in tenth spot. Felipe Massa took seventh for Williams, while Romain Grosjean finished eighth.

Perhaps the most impressive performance in this race of attrition came from the Marussia team's Jules Bianchi. The Frenchman finished eighth on track, however a five-second penalty meant he ended up one spot further down the order. Marcus Ericsson in the first of the Caterham's finished eleventh, with the second Caterham of Kamui Kobayashi thirteenth and Max Chilton fourteenth, the last of the finishers in a race with two Safety Car periods.