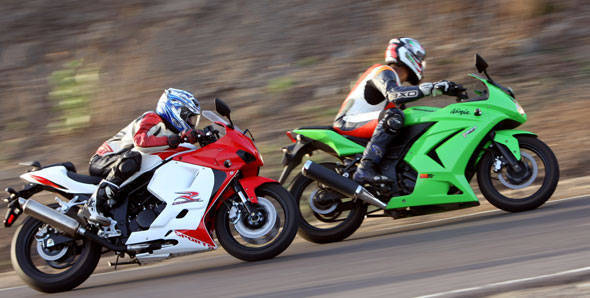 The Kawasaki Ninja 250R set a new benchmark in performance motorcycling in the country when it was launched in late 2009. It was the first twin-cylinder motorcycle in the country after the iconic Yamaha RD350 and was quick to top the wish list of most enthusiasts in the country. Pricing was the chink in its armour but it was the ultimate performance machine you could buy. Last year, Honda launched the CBR250R but it was a far cry from the Ninja's impressive spec list  its parallel twin cylinder engine and liquid-cooling are still the highlights of this highly capable motorcycle. Now with DSk Motowheels launching the Hyosung GT250R, the Ninja finally seems to have some competition. But does the mean green machine have reason to get worried?

The Ninja 250R follows an old school design philosophy that harks back to its original GPz250 days. As a result it looks slightly dated when compared to the more modern looking, imposingly styled GT250R. The Hyosung's edgy design and projector headlights give it an edge over the Ninja, but the Ninja is quick to score in terms of fit-finish and quality. Its overall build quality feels top notch and its well-finished panels give the Ninja a premium feel, which the Hyosung lacks. But without spending too much time on aesthetics, I would like to get to the core of the issue. The Kawasaki sports a liquid-cooled, 249cc, parallel-twin motor that churns out an impressive 33PS at 11,000rpm and 22Nm at 8200rpm. The Hyosung uses an air/oil cooled 249cc, 75-degree V-twin engine that produces 27.88PS at 10,000rpm and 22.07Nm at 8000rpm.

The Ninja has a typical sportsbike feel and is peaky in nature. The Hyosung makes its peak power a full 1000 revs lower than the Ninja, but does not feel as punchy. The Ninja's redline sits at a rather high 13,000rpm, as compared to the Hyosung's 10,500rpm and both bikes pull beyond their respective redlines but the Ninja has an edge since it revs higher. The Ninja here is the sweeter sounding of the two especially at higher revs whereas the Comet sounds muted despite its V-twin mill. The Ninja's engine feels a lot smoother as well and even at high revs feels calm unlike the Hyosung. Performance numbers are proof of the Ninja having the upper hand here. The Ninja achieves the 0-100kmph feat in 8.3 seconds, while the GT250R takes 10.21 seconds. The Ninja crosses the quarter mile mark in 16.26 seconds at 128.83kmph, whereas the GT250R is more than a second slower at 17.53 seconds, and is at 119.67kmph at the point. The Ninja outperforms the Hyosung in braking as well, despite the GT250R sporting twin 300mm discs upfront. The Ninja's 290mm single petal disc brake offers a lot more bite, feedback and feel than the GT250R, be it at low speeds or high.

In the handling department the Ninja again scores over the Hyosung and has a light, crisp feel when thrown into a series of corners. The Hyosung around the same corners feels heavy and slow. Tipped in, the Hyosung is not as quick to respond to your inputs as the Ninja. The Hyosung's heavy front end further adds to its woes, while the Ninja slices through traffic with utmost ease in comparison. The Ninja wears IRC tyres at both ends and offers good grip but the Hyosung with its Shinko rubber isn't far behind and is equally confidence inspiring if not more. Ergonomics on the Ninja are far better than its Korean competitor and the Ninja feels almost upright and is comfortable on a race track, highway or in the city. The Hyosung's forward bias riding position feels cumbersome in the city but should feel perfect around a race track.

Finally coming to the big question. The Ninja at Rs 2.85 lakh, ex-showroom Delhi feels a bit expensive, but offers a package that keeps you smiling. The Hyosung's pricing of Rs 2.75 lakh feels too much for what the motorcycle offers. The clear winner here then is the Kawasaki Ninja 250R, a motorcycle that's acclaimed globally as one of the best 250cc motorcycles. The GT250R? Well, it just needs to up its game to a new level to stand a chance at the given price point.