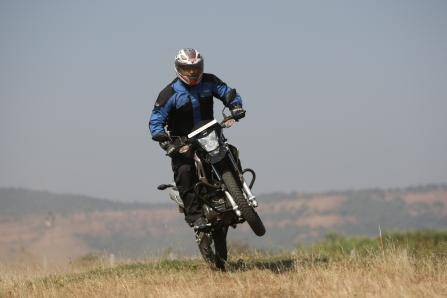 The sweeping corner I love so much on this road is coming up and the Hero Impulse is busy confusing the pants off me. Should I lean out, supermotard style, let the bike gain a huge lean angle with the leg out smartly to catch the front if it goes? Or should I slide my butt off the inside as usual, stick my knee out, load the inside peg up and slice through like I was on a road bike? Ah, the pleasures of having a choice. And that is what the Impulse really is about. It answers a question that has often popped into your head (and mine) but has, so far, neither been fully articulated nor ever answered. And the question is this. Do Indian streetbikes, the vanilla commuters, need to be erm, normal. Can't one be unashamedly sporty? The sales figures of the Impulse, I think, will partially answer that question shortly.

While you might get away by saying the Impulse is just a dirt-ified CBZ X-Treme, you would actually be wrong. Parked in a lot full of other Indian bikes, it sticks out even in black. It is taller than the rest though most of us managed to get our feet on the ground without undue stress and it is skinnier in appearance, the exhaust peeks out near the right end of the single-piece seat, dirt bike style and the whole appearance is an unfamiliar dirtbike styled thing. But it is well-made apart from some very ugly welding seams on the fairing and it looks distinctive enough. The chunky on-off-road style tread pattern, the tall 19-inch front tyre, the taller forks, spoked wheels and all make it poles apart from the current crop of 150cc machines.

The Impulse's engine is substantially the same as the CBZ X-Treme but it wears a new cam, a new balancer shaft and a different carb spec which all make it very different from the Hunk/CBZX/Unicorn/Dazzler, the quartet sharing a much closer spec and a slightly more powerful state of tune than the Impulse.  The Impulse makes 13.4Nm at 5000rpm, and power peaks at 13.2PS at 7500rpm. The balancer shaft brings a wonderful smoothness to the engine at street and highway speeds and I like the fact that the Impulse engine sounds calmer and feels like it is breathing better than all four of the Hero/Honda siblings.

The gears were a bit notchy on our bike but I think they will smooth out. What won't improve is the fact that the stubby gear lever is a bit short on the space for your toe to hook in for an upshift, especially when wearing race boots that most of Team OVERDRIVE does daily. In regular sneaker- or sandal-wearing use I think it might work just fine. Overall, it's an eerily smooth motorcycle, something I didn't expect it to be. I've ridden the likes of the Yamaha WR450F and I know for a fact that dirtbikes aren't ever smooth. But then I was reminded of the other motorcycle I did ride that the Impulse closely resembles. The Honda FMX650, a trailie style motorcycle that turns out to be a softly-sprung, gently-powered machine that would do touring and commuting with great ease and an utter lack of strain. And I think the Impulse follows in those footsteps.

Given the engine refinement, it's easy to think that this 'detuned' 150 would turn out slow. But what you are overlooking is that the Impulse weighs only 134kg, which makes it 10-odd kilos lighter on average. The Impulse will hit 60kmph in 5.38 seconds, which is actually  quicker than all of its cousins by a few tenths of a second. The hundred comes up in 19.58s and the bike tops out at 107kmph, though past the hundred progress isn't all fire and brimstone. The kicker? When you look at the performance figures, the Impulse is the quickest 150cc motorcycle save for the R15 (and I'm not counting the Apache which has a displacement advantage). What I really do like about the bike is how smooth it feels at all speeds from crawling in traffic to flat out during performance testing.

The engine doesn't ever seem to lose its cool. But what the numbers don't tell you, also, is the torquey feel of the motor. It appears to be willing to pull with genuine effort at any and all revs that happen to be on the tacho when you whack the throttle open.

The Impulse wears an unfamiliar looking thin-tubed semi double cradle frame with gangly suspension and there's a lot of air between the rear wheel and the rear fender. There's a creamy softness to the suspension and the tyres feel like they're slightly squishy. This makes feedback a bit distant and the tall posture and that exaggerated sense of leaning into a corner means that despite being as neutral and encouraging as any Honda I have ever ridden, turning into a corner is a bit of an adjustment. You learn to trust the suspension, which proves adept at dismissing potholes, dirt, rocks and overbanding without feeling overtly soft or wallowly and I absolutely loved the feel of the frame, which feels narrow between your legs, effortless in direction changes and as taut as the storyline of The Departed. I'd also be using a bit more than just the tarmac. The Impulse's tyres are good on the road and adequate off it.

There is grip even on dry grass and while I'm sure full knobbies would add still more traction, the Impulse isn't fazed by a rider straightlining a corner by running across the dirt in its middle or indeed, running wide on the exit, hitting the dirt briefly before returning to tarmac. Ride quality as you should have gathered is the star of the show. The Impulse makes the worst performances of our notorious civil contractors fade into the background as it carries you gently across the worst. I did think initially that the brakes felt a bit soft but then I realised that on dirt roads, the lack of sharpness helps. It allows more modulation and control and for those of us who (over)use the front brake thanks to the amount of time we spend on tarmac or at the track, it's a crash-saver.

Verdict As you can tell, I really liked the Impulse. In traffic, the taller stance means you can see over cars which means a greater selection of gaps, better line choices and consequently, faster commutes with the same or less effort. The narrow frame and the flickability make the Impulse a massively accomplished traffic beater. It's an urban demon and will handle all-day 80kmph when pushed out on to the highway. But given the sort of highway speeds we deal with, overtaking at 90-100kmph will be a bit slow and in that singular sense, the CBR250R is probably India's sweetest highway tourer at the moment. At Rs 66,800 ex-Delhi, the Impulse sits at the premium 150 price point like the Yamaha FZ16. It's between Rs 4 and 6,000 more expensive than the others generally. It's a reasonable price for an awesome motorcycle in my books. Indian 150s have become too cookie-cutter and the Impulse is fresh.