In the world of UFC (Ultimate Fighting Championship), fighters weighing in at around 60kg - not too heavy, but not too light - are classified as bantamweights. When you bring that perspective into the automobile industry, I'd say that the Mercedes-Benz GLC, the BMW X3 and the Audi Q5 are the bantamweights of the luxury SUV segment - not as large or as capable as the full-size 7-seaters, but not as small as the entry-level luxury SUVs either. Admittedly, it took a while for Mercedes to bring a bantamweight fighter in India which gave the X3 and Q5 some breathing space in the segment. But did all that extra time they took finally pay off? That's what we're here to find out. We didn't include the Q5 in this test because the all-new version will make its way to India later this year, and it wouldn't be fair to compare the new GLC with the current-gen car. Not that the X3 is spanking new, but its update is still comparatively far away. 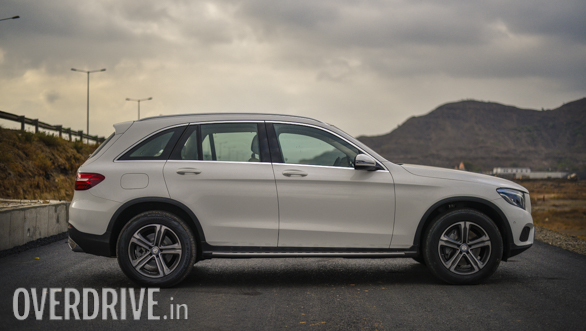 The Mercedes GLC certainly looks a lot fresher, but it reminds me of the GLA 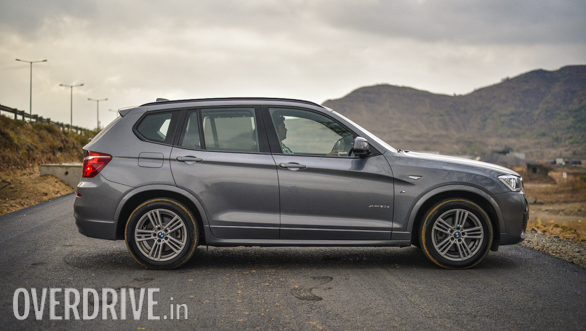 When it comes to exterior design, I'll have to admit that I'm pretty confused about which one I prefer. The Mercedes certainly looks a lot fresher, but at the same time, it reminds me of the GLA which, in my opinion, feels like a hopped-up hatchback. So that's one plus point for looking modern, but one negative point in terms for seeming less SUV-like. The X3, on the other hand, reminds me of the larger X5, and looks more SUV-ish than the GLC. However, the ageing design doesn't work in its favour. What confuses me further is that I like the X3 better from certain angles, and the GLC better from the others. 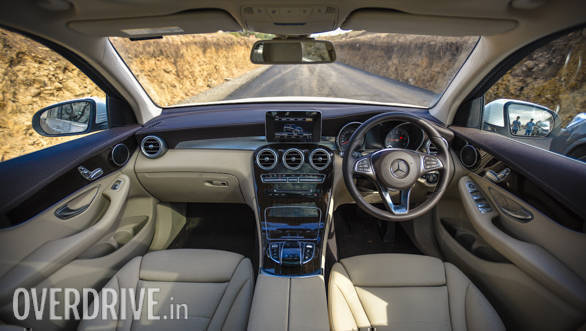 The GLC definitely has the cleaner, more elegant-looking cabin 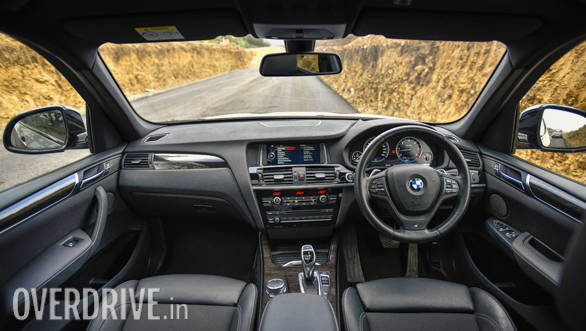 For instance, the X3's face looks more handsome with its sharper and aggressive design that features a lot more elements. The GLC, on the other hand, has a simpler theme which gives it a more conservative look. However, it's this theme that makes the rear of the GLC a little more appealing than the X3's slightly overdone design. Confused? Yeah, me too! 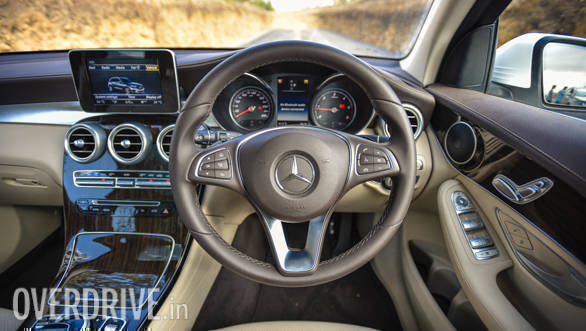 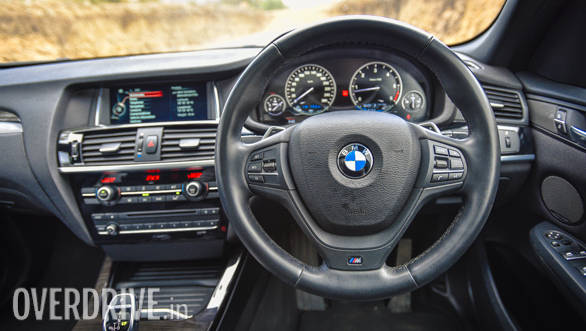 It's a similarly confusing situation when it comes to the interior too! The GLC definitely has the cleaner, more elegant-looking cabin here thanks to the simple designs and extensive use of brushed aluminium. But the X3's cabin will appeal more to the younger audience with its driver-centric dashboard. It looks a little sportier, and its iDrive system is much better than the GLC's infotainment interface. 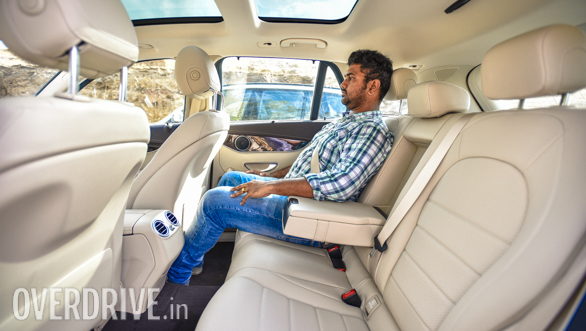 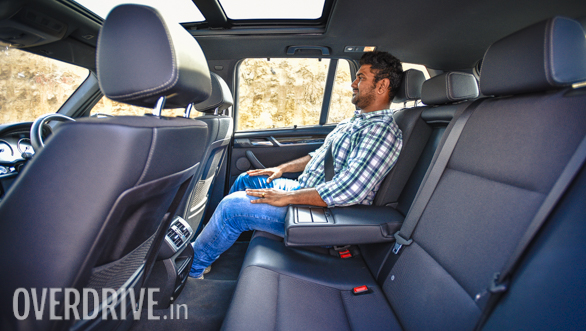 The BMW X3, which features BMW's xDrive all-wheel-drive system, uses a 2.0-litre all-aluminium 4-cylinder turbo-diesel. This engine, which is also seen in the X1, churns out 190PS of power at 4,000rpm and 400Nm of torque between 1,750-2,500rpm. The highlight of the engine has to be its responsiveness and refinement. Coupled with the 8-speed ZF automatic transmission, the X3 offers a very effortless drive thanks to smooth and linear power delivery. The engine feels very creamy and the quick, buttery nature of the gearbox only makes the drive that much better. The X3 gets four drive modes - Eco Pro, Comfort, Sport and Sport+. In Eco Pro, it returned a pretty good average of 13.1kmpl in the city and 18.9kmpl on the highway. In terms of performance we managed to get a respectable 0-100kmph time of 9.1seconds. 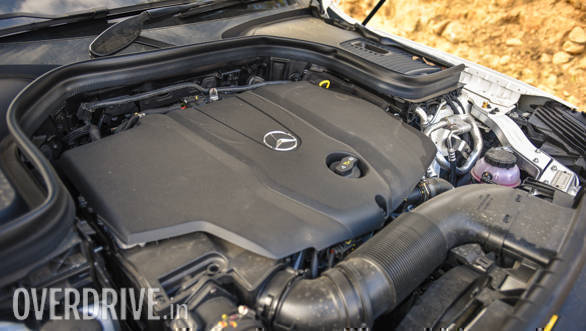 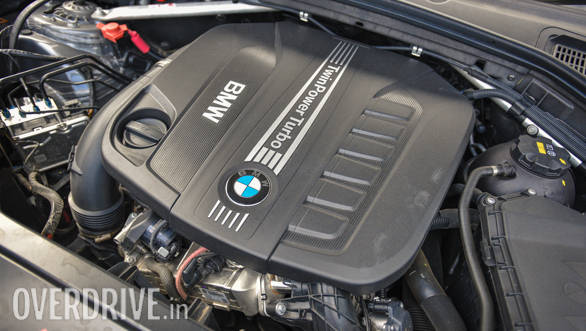 However, the GLC beats the X3 on both grounds. It gets four driving modes too, and in Eco it returned 13.8kmpl in the city and 21.3kmpl on the highway. In Sport+ meanwhile, we recorded a 0-100kmph time of 8.2 seconds. This, despite the fact that the GLC makes 20PS less and the same amount of torque. It is all-wheel driven too and uses a 4-cylinder 2.1-litre turbo-diesel engine mated to a 9-speed automatic transmission. Peak power and torque have a wider spread than in the BMW with the 170PS coming from 3,000-4,200rpm and the 400Nm coming from as low as 1,400rpm and going up to 2,800rpm. While engine refinement and transmission response in both cars are the same, the GLC's power delivery feels more linear, which makes it just a little easier and more comfortable to drive. Both cars will sit at high triple-digit speed comfortably, but the GLC, with its 9-speed transmission, seems to be just a little more at ease than the X3.

In terms of driver involvement and corner carving, the X3 comes out on top. The nice, chunky steering wheel offers very good feedback and the weighting is well-judged at all speeds. Additionally, the sharp and precise turn-in makes the SUV feel very nimble and light on its feet. The best part is that with the adjustable dampers set to Sport+, there's barely any body roll when you push the car hard around bends. 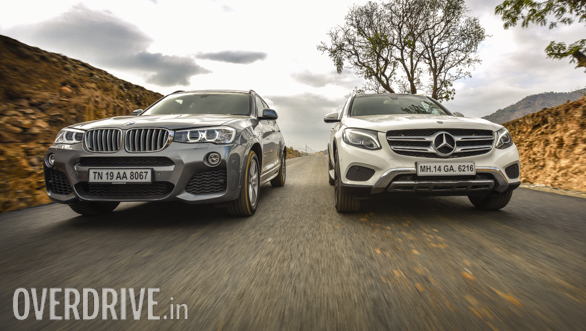 In comparison, the GLC doesn't feel as sharp or as exciting around corners. I say 'in comparison' because the way the GLC handles isn't really bad when you look at it by itself. The level of steering feedback and its responsiveness aren't as good as in the Beemer, but it still feels well-weighted and precise. There is more roll than you'd expect, thanks to the softer suspension (it doesn't get adjustable suspension), but it's well controlled and not in the least bit unnerving.

The softer suspension also translates to better ride quality than the Beemer. Both absorb the ruts and broken tarmac quite well but despite the adjustable dampers, the X3 feels just a little bit firmer than the GLC. This results in more movement in the cabin, whereas in the GLC, the passengers are almost undisturbed over bad roads. Essentially, unless handling is only concern, the GLC makes for a better package in the ride and handling department.

As you'd expect from German luxury cars, the X3 and GLC are specced similarly in terms of safety. They get seven airbags, ABS, traction control, tyre pressure monitoring system and stability control as standard. Only the Beemer gets run-flat tyres, whereas the Merc gets the Attention Assist function which sends a warning to the driver in case it detects that he is drowsy. Additionally, the GLC gets LED headlights, whereas the X3 still uses bi-xenon lights. It's the same case in terms of features -- both are neck and neck. You get features like dual-zone climate control, a panoramic sunroof and electrically adjustable seats. However, while in the BMW you get just parking sensors and a camera, the GLC features Parking Assist which basically means it can be parked without steering inputs from the driver. 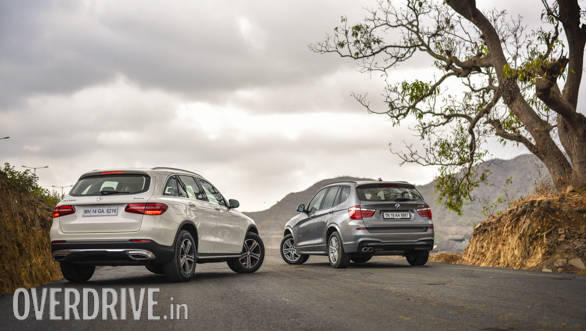 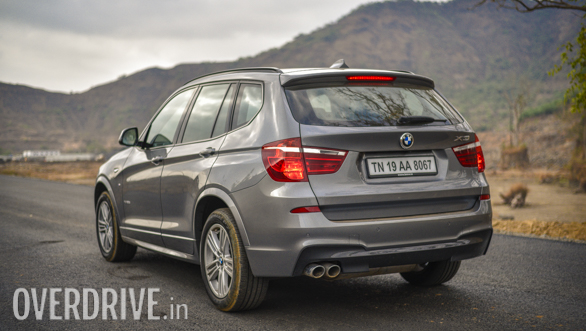 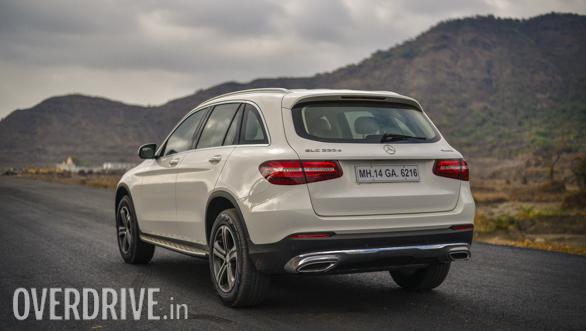 At the end, the biggest factor in a comparison is price. The X3 will set you back Rs 68.14 lakh (on-road, Mumbai), whereas the GLC is considerably cheaper at Rs 64.50 lakh. What you get with the Merc is a more up-to-date package that's just as feature loaded, more comfortable, a little more spacious, and better performance and efficiency too. It might not be as exciting or as fun to drive as the X3 around a twisty road, but it's certainly the better all-round package and the more sensible choice. But like I said earlier, if your only priority is a luxury SUV that's involving to drive, the X3 is for you. Despite being the significantly older one here, it certainly put up quite a fight and you have to give it that!

?
Note: The BMW X3 in these images is the xDrive30d M Sport variant and is used only for representational purposes. We couldn't get our hands on the xDrive20d variant, but we have driven the ca??r earlier. 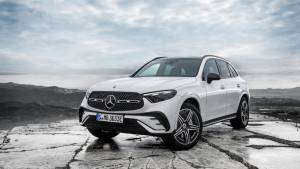