Think Aprilia and two things come to mind. First, beautiful motorcycles with monstrous engines, and the aura of a brand with no less than 45 world championships under the belt (which leads them to claim the title of the most successful European manufacturer in racing). Second, how they have super-impressive top-flight motorcycles (like the RSV4 or the Tuono V4R) and the super-impressive entry-level motorcycles (like the RS125, now RS250), but literally no famous motorcycles in the middle. At first glance, it's like an Italian pasta with the sauce missing! Or is it? To get a taste for the filling, we got a taste of the practical Aprilia street bike, the Mana 850. Saucy? Or bland? Let's find out. 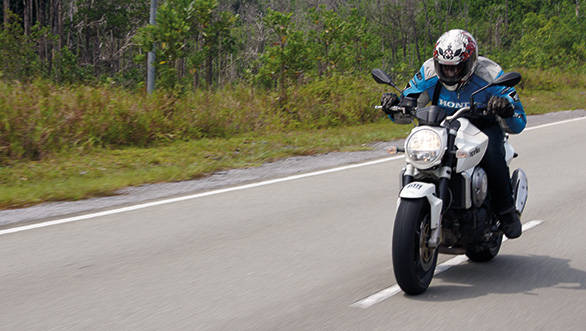 Aprilia entered the Indian market earlier this year, and is offering its entire line-up including the top of the line RSV4 superbike, the Dorsoduro 1200 giant supermoto, the mad-naked Tuono and this, the practical street bike  Mana 850.

The Mana is an entry-level Aprilia - which means it is supposed to be cheap, versatile and aims to hook new customers and bring them into the brand. It's also supposed to be a street bike which means a riding position, handling and ride quality balance which should make sense in our typically messy Indian traffic conditions. And then it has an automatic transmission, which is an additional distinction. While the manufacturer is yet to provide us with a test bike - indeed, their roll-out has been slow, they still only have one dealer and the delivery process is still sluggish - I was lucky to sample the Mana on my recent trip to Borneo in Malaysia. Exclusive automatic for you people, then. 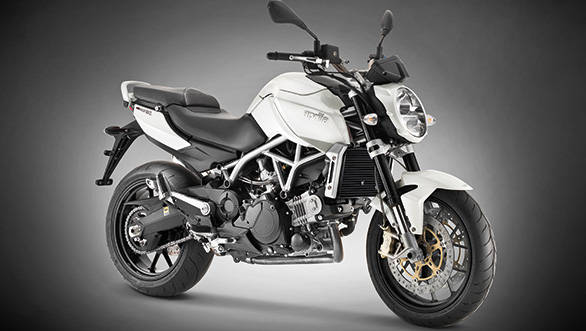 The Mana debuted at the Milan show in 2006, and was released in Europe as a 2007 model. The positive response and accolades did not come immediately, however, and it took a model update before the minor glitches in the electronics were ironed out and the full benefit of the ride by wire and the automatic transmission was delivered, to be honest.

At first glance, the sculpted Mana 850 looks like any other European street naked. But sort of John McLane, it thinks differently - it thinks it's partly a naked bike and partly a big, automatic scooter. The Mana debuted Aprilia's automatic transmission (now also available on the more attractive, but oddly named Shiver). It's substantially a scaled down CVT (continuously variable transmission), with seven pre-set ratios, and not a complex dual clutch system like Honda's VFR1200F's gearbox.

Utility is a major theme for this bike and the Italian design is quite clever. The obvious charm lies in the oval twin-section head lamp and the short rear fairing. Thick 43mm upside down front forks and steel trellis frame add to the naked bike look. The 16-litre fuel tank is placed under the rear seat for a more even weight distribution and that also lowers the bike's centre of gravity.

What's in the tank, then? Space. The tank is actually a storage compartment - one of the reasons why it looks larger than usual. It has as special nonslip, non scratch coating and can host a full-size helmet inside, which means you can commute without having to lug a helmet with you once you've parked. There's a light inside so you won't fumble about in the dark, as well as 12V charger socket to charge phones with. You can also store the vehicle's papers in here. To open, just hit the switch on the handlebar which only works when you are stationary. A manually operated lever is under the passenger seat should the battery be dead. 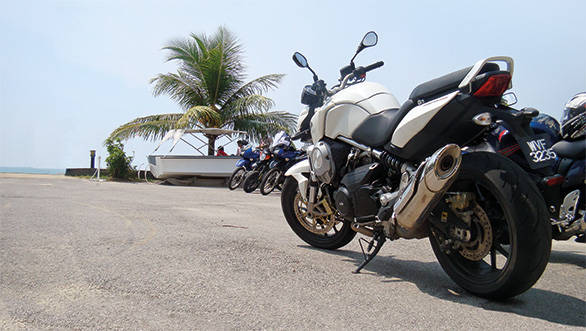 As with most big Aprilia engines, lubrication is dry sump with a separate oil reservoir built into the engine to reduce overall weight. Which doesn't mean the Mana is light, mind you, at 185kg, it's pretty heavy. That's 18 kilos more than the Ducati Monster 796. But at the same time it is almost 60kg lesser than the Bandit which weighs 244kg.

Swing a leg over and you will find that the low footpegs and high-set handlebars make for an upright, comfortable riding position. Turn the ignition on, release the parking brake located where you normally see the fuel on/off knob on carbureted Indian bikes. Not as convenient as the VFR's parking brake lever located on the left clip-on, but not too cumbersome to use either. 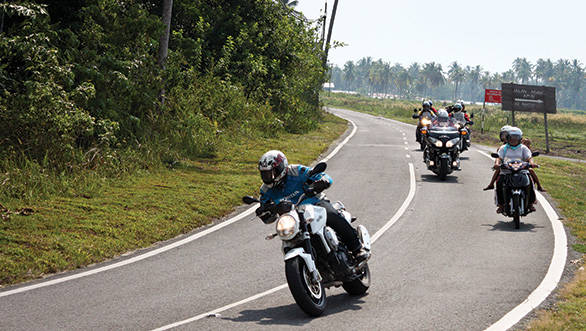 Hold one of the brakes and crank the engine to life. Being a V-twin you might expect it to roar like the Monster, but disappointingly, the Mana isn't even half as loud as the Ducati. Now, just roll the throttle on and ride away! Riding the Mana couldn't be easier. It's CVT has pre-set seven ratios which are selected by the control system automatically in automatic mode, or in manual mode, you have buttons that can allow you to select which gear you prefer. Left in fully automatic, the shifts are seamless and it worked brilliantly in traffic and while out on the highway. In manual mode, you can shift with buttons or with the foot as you normally would. There is a slight delay in shift while the system upshifts, though the rev matching on the way down the gearbox sounds great, with lesser delay. Shifting with buttons seems a little complex at first, but it didn't take me long to get used to, and reminded me of my PlayStation. I must add here that I enjoyed using the shift buttons on the handlebars more than the conventional toe shifter. But the Mana's system certainly feels a generation older than far more indulging experience provided by the VFR1200F's unit. This can be credited to the Mana lacking the kind of feedback from the engine that the Honda enjoys. 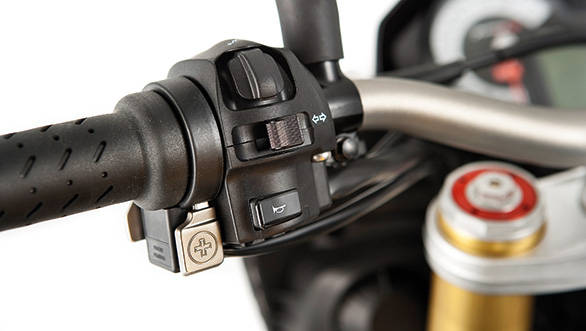 The CVT disengages at speeds below 30kmph ­ this certainly feels scary, as the bike is freewheeling. But the transmission immediately starts powering the rear wheel when the throttle is re-opened - which feels exactly like when you slip the clutch on a normal motorcycle. 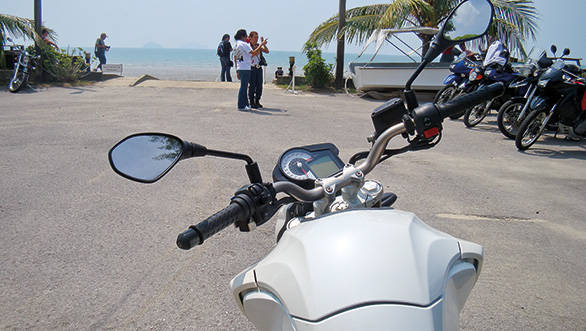 The Mana's clocks show you all the information you need, except revs

For my ride, which was mostly on Borneo's highways, I left the motorcycle in touring mode for the lion's share of the time. I liked the way it felt in this mode - eager but not frantic and cruising at three-digit speeds was effortless. I managed to see 172kmph on one long stretch  the bike I rode was sans a flyscreen, but Aprilia will also be selling the Mana GT in India, which sports a half fairing and should help avoid straining your neck, should you decide to blast on an open road. Claimed top speed for the Mana though is a creditable 200kmph.

The engine feels refined even at high revs while the exhaust note remains muted  more like a big automatic scooter, which again is a let-down. How did I know I hit exactly 172kmph? Well, the instrument cluster features an analog speedometer, but the accompanying LCD screen shows the maximum speed achieved, along with the power mode, the trip computer, miles to empty, temperatures, average economy and settings.

The highways in Borneo are similar to our country, bumpy and at times offering lot of twisties, the Mana rode comfortably in these conditions making it ideal to ride on Indian roads. In comparison to the Monster, the Mana's ride quality feels plusher, hence better suited.

The Mana takes corners with aplomb, and feels nimble. The sticky 120 section rubber at the front and 190 section at the rear offer good grip and contribute to the Mana's able handling. The wide handlebar makes for comfortable mile munching, and feels perfect in town as well, especially while taking tight u-turns. 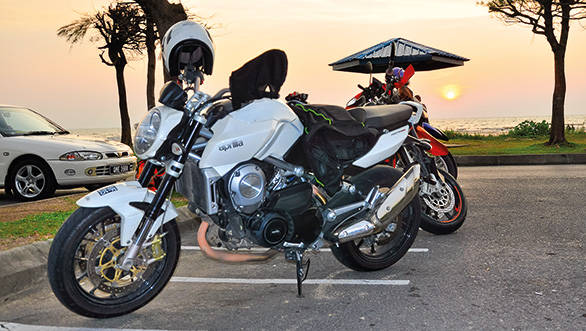 The front seat is plush and comfy, after riding the bike for an entire day I had no complaints. The ride too is great and isn't very stiff or soft but well matched to the chassis. The upside down 43mm front forks are not adjustable. A full 120mm front suspension travel lets one tackle bad surfaces and potholes, but the same set-up causes the forks to dive under hard braking. At the rear the monoshock is directly mounted onto the swingarm and offers adjustments for spring preload and rebound damping. The monoshock is offset to the left of the bike to make space for the exhaust making the bike more compact. In fact the Mana has a wheelbase of 1463mm, 13mm more than the Monster 796. Braking feels novice-friendly with a gentle bite and progressive power build-up feeling unintimidating but effective. Our motorcycle didn't have the optional ABS setup, though. The front discs are 320mm in diameter (the standard size for Aprilia's big bikes) while at the rear a single 260mm disc does duty. 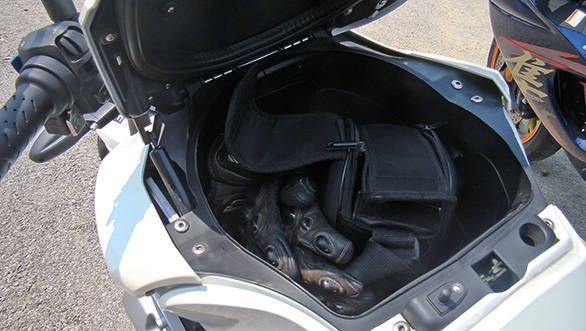 Perhaps the only thing missing with the Mana is a sense of enthusiasm. It makes a lot of sense for Indian riders who want to either use it for daily commuting or touring India's awesome countryside, however. The CVT makes city riding stress free without significantly affecting fuel consumption - we saw an overall figure over 20kmpl through towns, twisties, highways and city traffic - despite leaving the bike in sport mode for most of the non-highway stretches. The seating position, the seat itself and the storage space only add to the practical appeal of this motorcycle. The Aprilia Mana 850 is priced at Rs 10.50 lakh (ex-Pune) while the ABS version costs an additional Rs 25,000. The Mana then doesn't come cheap, European motorcycles have traditionally been expensive and the Aprilia is no exception.

The Mana produces more or less the same power as a Ninja650R but commands a premium of about five and half lakh over the Kwacker for its automatic transmission. Aprilia is here but the big bike segment in the country is yet to see the signs that suggest that a market as large as ours and with as much expected growth as ours is being taken as serious as it should. In order to attract larger audiences, Aprilia need to take the CKD route, appoint more dealers and price their products reasonably. If they don't, the rapidly expanding CBU segment could easily overwhelm this premium Italian brand. This would be a pity since Aprilia does make brilliant motorcycles!