The Mercedes-Benz S-Class has been around for seven generations. First named the S-Class in the early '70s, its DNA can be traced to almost two decades before its introduction. Ever since its debut in 1972, the S-Class has been a pioneer in the automotive industry. It led the way by enveloping 'first in industry' features; be it safety, comfort, convenience, technology, engineering and design. The interesting bit is that the Mercedes-Benz S-Class has been so ahead of its time, it used to take almost a decade before it got dated and a whole new S-Class was reborn. Consumer demands and fast-changing technology, however, changed all that and in the last couple of decades, we have seen refreshes and updates flowing in, in shorter intervals. 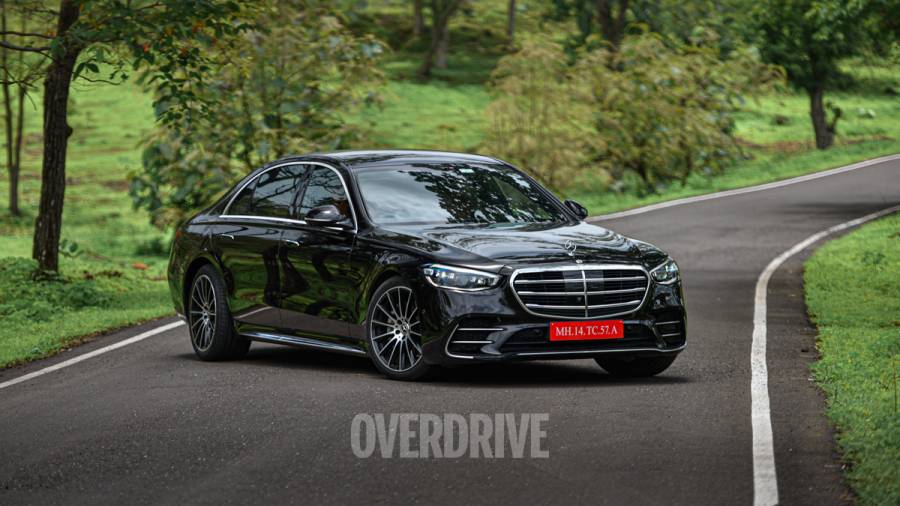 Now there is a new S-Class, a new generation of Mercedes's flagship, and one that significantly broadens the goalposts. And it does this through significant revisions to the mechanical parts but more importantly with a host of features that brings in a whole new dimension to comfort, luxury and entertainment through biometrics, digitisation and level 3 autonomy.

That said, there is a thing like too much technology. The S-Class can be overwhelming in that way, there is useful technology that makes itself felt every day and certainly enhances your driving experience. Then there is the less useful stuff that either takes much too long to figure out, or is simply not needed often enough. Then there is tech that works in ways so mysterious you just can't figure it out, and some of it you simply don't know exists. 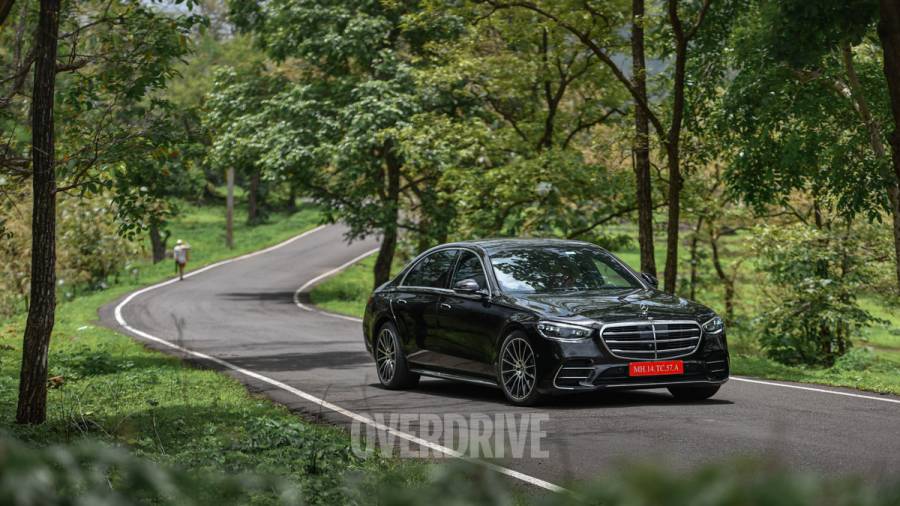 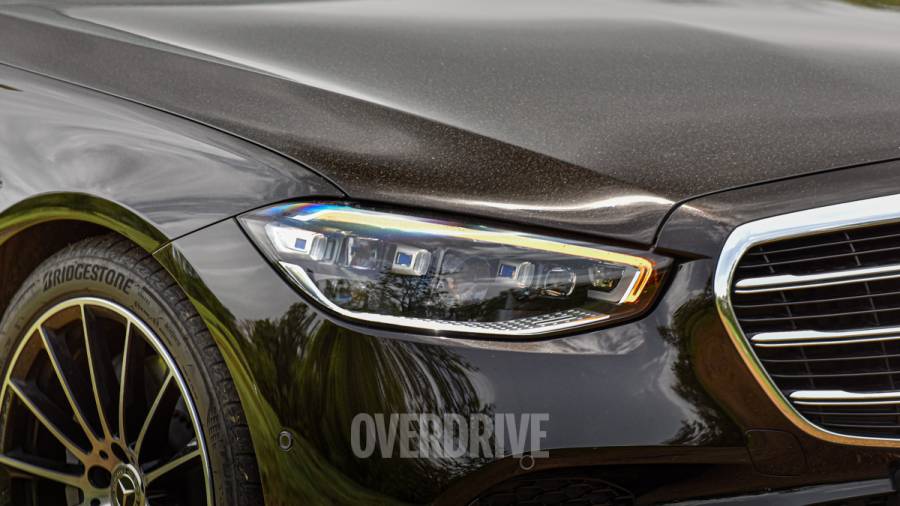 But let's first take a look at the exterior changes, and the biggest revision is to the exterior illumination, specifically the digital headlamps that were developed in association with Marelli Automotive Lighting. The new S-Class gets a revolutionary set of headlamps that are still evolving where technology is concerned. This is one of the earliest iterations of the digital headlamps technology and what it can do is quite simply astounding. To elaborate the digital headlamps display over one million pixels per headlamps through an array of one million micro mirrors. That essentially means you can get the clarity of 2 million pixels combining both headlamps, which is similar to the clarity you get from a full HD television panel or 1080p. In addition these headlamps can do a lot more, a lot more cleverly. Cameras and sensors detect various objects on the road or off it and send signals to the headlamps and what to do next, brighten illumination or reduce it, control what bits are to be illuminated and where not to disturb oncoming drivers. It can also project symbols on the road ahead that provide instructions on things to watch out for or things to do. It can project road warning signs, navigation indicators, distance to vehicles ahead of you, blind spot indicators, pedestrian crossings, construction zones, road surface conditions and much more. Development is still on to further amplify the scope of what these headlamps can do, and its all very high-tech exciting stuff. 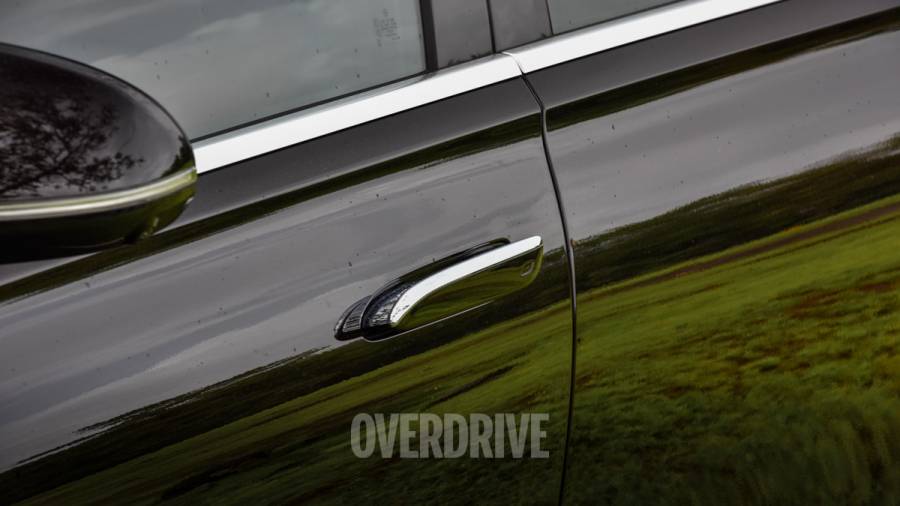 The next big addition to the exteriors are the flush door handles. They are a neat party trick, very impressive if you've got friends coming along for a drive and they see the door handles popping out calmly on the S-Class when you hit the unlock button. There are however a few concerns I had with this. First, and I'm not sure why Mercedes couldn't make these fit flush in the door panels. When locked the door handles don't exactly sink into the door entirely, there is a tiny amount that still sticks out and it looks a bit lumpish. These door handles also feature keyless entry, but it's a bit tricky to get the system working seamlessly since we couldn't figure out where exactly to place a finger on the door handle to unlock it. Third, and this was a big concern. We had left the keys inside the car, it's not exactly a small key and is quite inconvenient and heavy to carry around in your pocket. The door handles sank into the door panels, and it wouldn't respond to any touch signals and pop out. The car hadn't locked itself, it was still unlocked, but there was just no way to get the door handles out to open the door since the leading edge of the handle sits inside the door panel and there is nothing to grab, push or pull! Panic ensued for several seconds since we were out photographing the car, very far away from civilization, with help nowhere close. Fortunately, something did happen, and several seconds later the door handles did pop out again, but what area did our fingers touch on the door handles to get that action going was unknown. Phew! 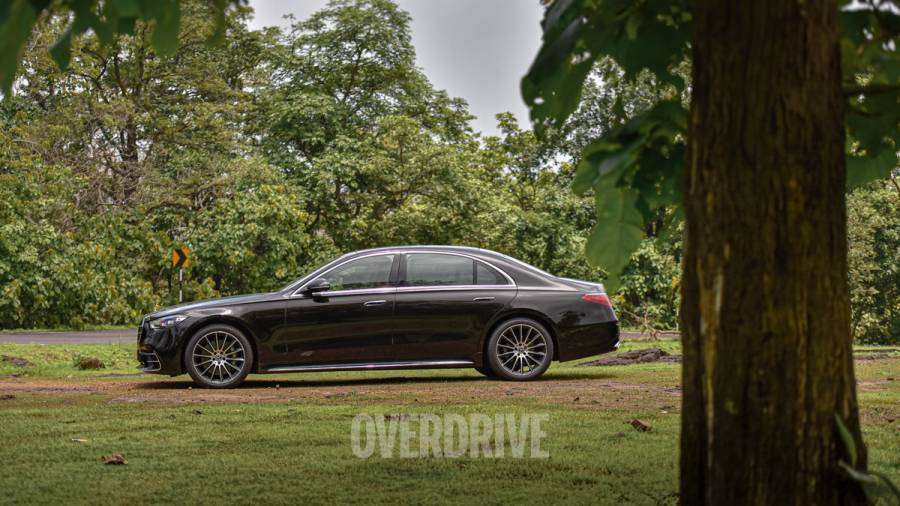 On the mechanical side of things, the S-Class we get in India is the long-wheelbase version (V223) which has increased by 51mm compared to the outgoing version (V222). Length, width and height have also increased marginally though it would take a very keen eye to identify the design changes. One of the more significant areas to go under the knife is the front bumper and the accents on the headlamps, as well as the revisions to the rear end. But all of this stretching and elongating gets you big gains where it matters the most, inside the cabin. 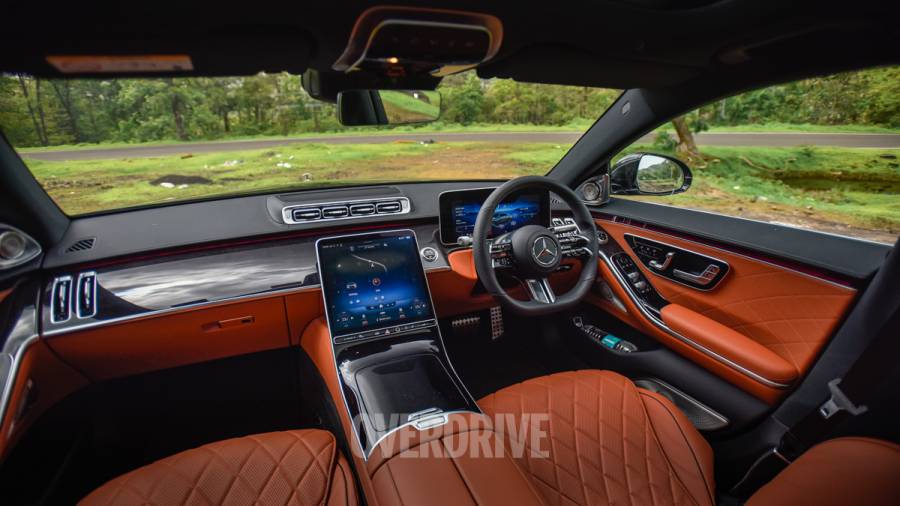 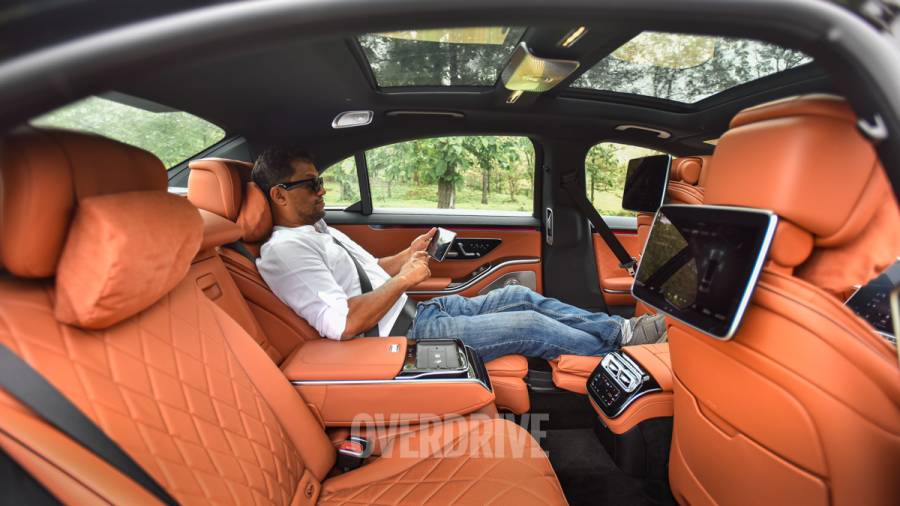 The Mercedes-Benz S-Class' cabin has one big challenge, where do you find yourself seated. Undoubtedly everyone votes in favour of the back seat, especially the one at the rear left corner. It's the seat that gets the most attention since it does the whole recline into a business-class lounge seat thing. And it stretches out with just one touch of a button. It's a comfortable seat to be in, if you're 5'4", any taller and you simply don't have enough room to stretch out completely. Then you require a series of permutations and combinations to find your sweet spot, which once found can be memorised. That apart it's a comfortable seat, and one that you can amply use to snooze in on your way back home from BKC. To add to the comfort, switch on the Burmester 4D sound experience and let the seats massage you to the beats of the tune you are listening to. Yup it actually does that, all that's left is for the S-Class to blow refreshing mist into your face! 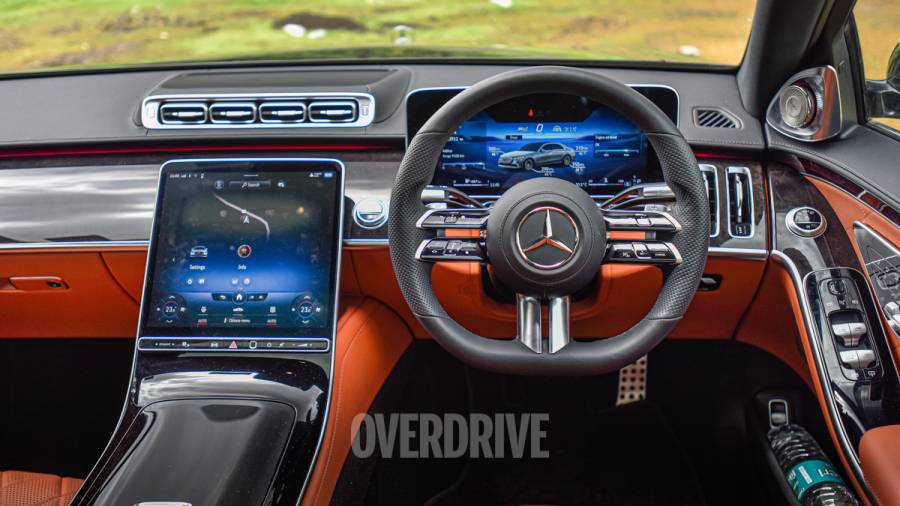 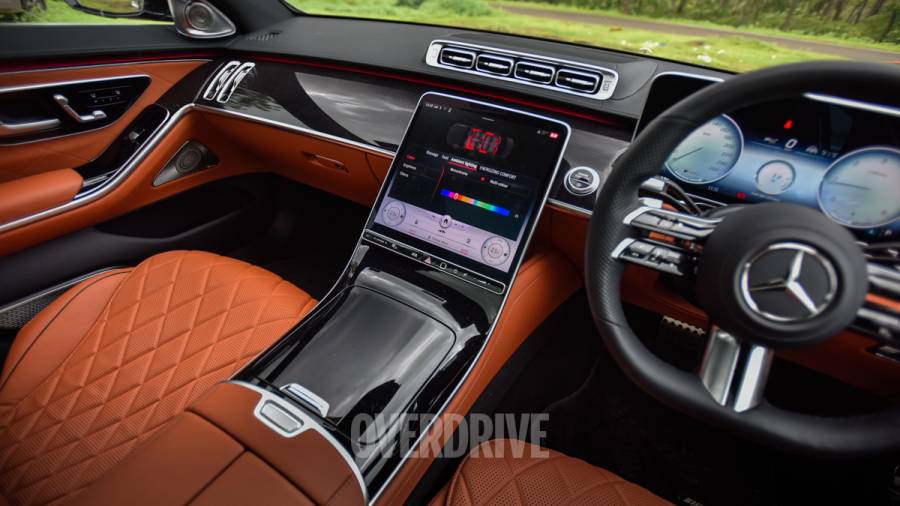 I however for obvious reasons, found myself in the driver's seat for the longest time. I was driving solo. And it's a damn good place to be in. It embraces you like an old friend who knows you intimately. The view ahead is clear through a wide screen and I love the way the dashboard wraps itself around the firewall with wide spaces at the edges of the pillar flowing into the armrest. The placement of the air-con vents on the edges is interesting as these point upwards instead of straight at the passengers though they direct air in every direction. There is however an array of vents just below the windscreen right above the piece-de-resistance of this cabin, the massive portrait style head unit display. It's a very minimalist but elegant dash area with the engine start/ stop button on it and just one row of soft touch buttons below the touch screen to activate the dynamic drive modes, car settings, volume and the 360 camera. The instrumentation screen is also pretty cool with a 3-dimensional display that at first is a bit disconcerting but your eyes soon adjust to the effect. 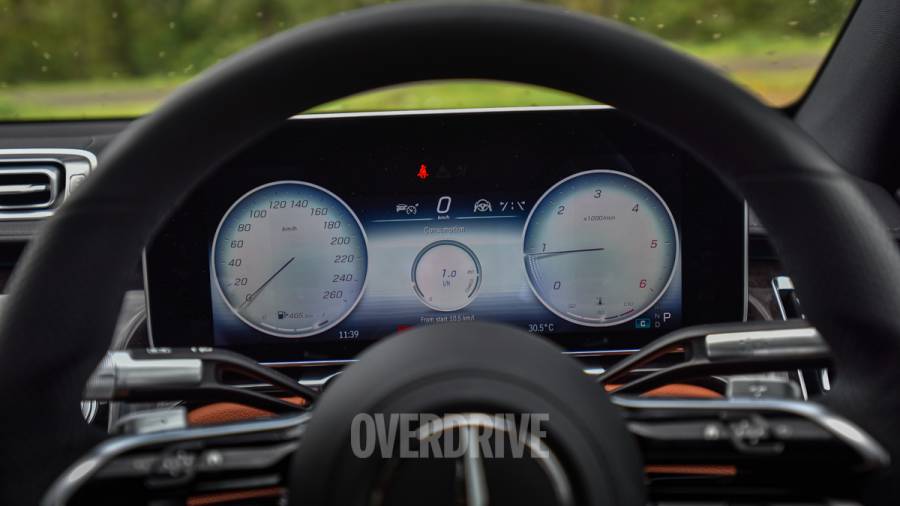 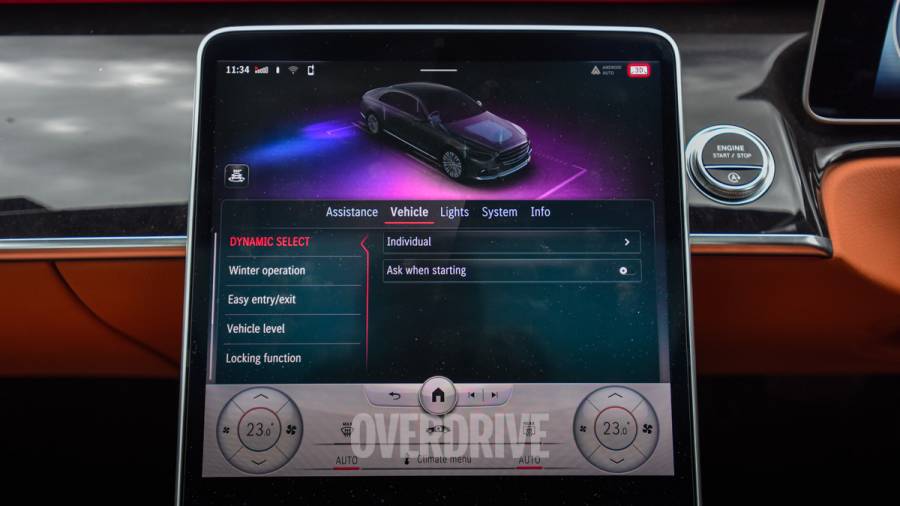 This new S-Class also features the latest NTG (New Telematic Generation) 7 MBUX which provides updated levels of connectivity and security, courtesy fingerprint recognition!  And then there is the mood lighting, the most interesting bit being the dual tones you can set in the light beams running across the length of the dashboard. There is also a smorgasbord of mood environments you can select that alters the illumination in the cabin, the ambient music, the aroma and even the instrument cluster and touch screen graphics. Another interesting feature is the blind spot warning that makes the LED light beam around the A-pillar flash red to warn you of a vehicle in your blind spot as you try to execute a lane change manoeuvre.

What I did find troublesome is the multitude of functions you can control in the  Mercedes-Benz S-Class from that head unit touch screen. Given the vast array of features, the functions don't follow a similar pattern of instructions to other Mercedes-Benz cars and it would take a few weeks to identify where every control resides and how it needs to be operated. In the quest to add more and more functions to a car, I assumed Mercedes-Benz missed a plot, which is the driving experience. That fortunately is not the case. The 2021 Mercedes-Benz S-Class is a fantastic car to lounge in without a doubt, but it is equally an enthralling car to drive. The variant I drove was the 400d, that's the oil burner carried forward from the older S-Class.   It displaces 3 litres and delivers 330PS of max power with 700Nm of torque available right from 1,200rpm all the way up to 3,200rpm with the engine redlining at a fairly high 5,000rpm. Mercedes claims this is a 5.4-second sedan to the ton, and it's not surprising. In sport mode, this is a nearly two and half-ton ballistic missile. The diesel motor is no slouch, its picks up pace rapidly, and does this with the utmost ease. The 9-speed automatic transmission is also a quick shifter, and sport mode allows the tranny to place the S-Class in the meatiest part of the torque spread to get its juices cooking. 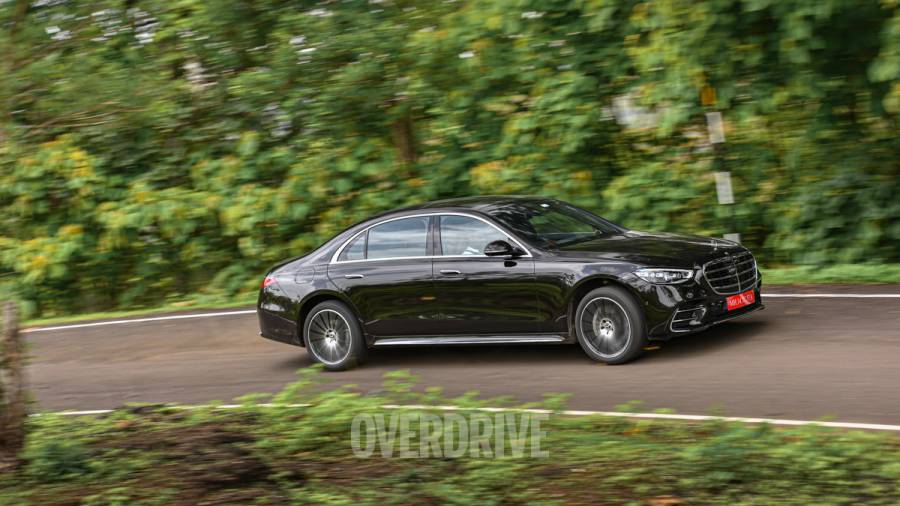 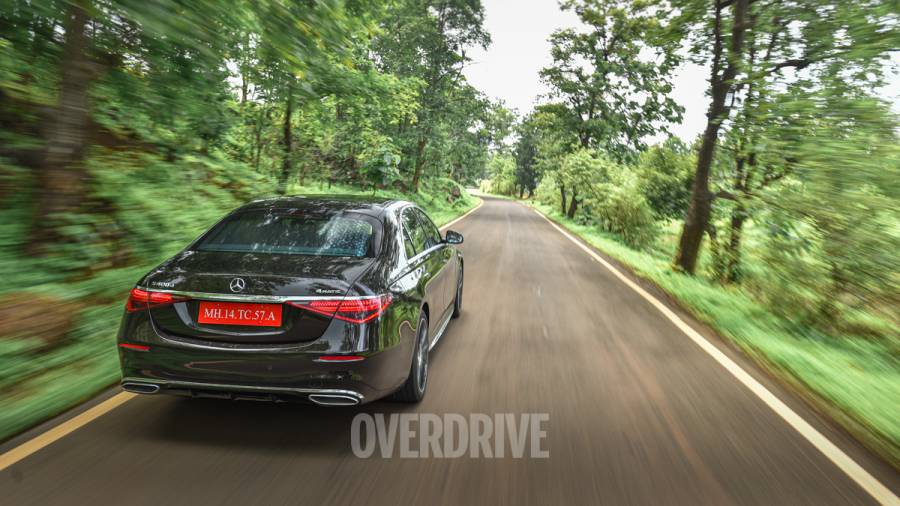 But it's not just the engine, even the chassis has been reworked heavily to drop weight by 60 kilos yet gaining more rigidity all thanks to extensive use of aluminium and other high strength and press-hardened steel alloys. And it makes this 5.2-metre long sedan dance with the skill of a professional, absent body roll or pitch and yaw. There is a linearity to this sedan that is hard to fathom, especially when it's being pushed hard. You get a sense of the weight it carries especially when you go hard on the brakes, but at the same time, the directness of the steering and the precision with which it turns into a corner is just sublime. This handling character is greatly enhanced by the rear-axle steering system that allows the rear wheels to turn in the opposing direction to the front wheels at low speeds or parallel to the front wheels as speeds climb above 60kph. The variant I was driving had a maximum steering angle of 10 degrees, and this is only available with the 255/40 R20 tyre sets that allow the larger angle. Adding a lot more substance to the handling character is the 4-wheel drive system which makes the S-Class feel a lot more agile yet stable at any speed. 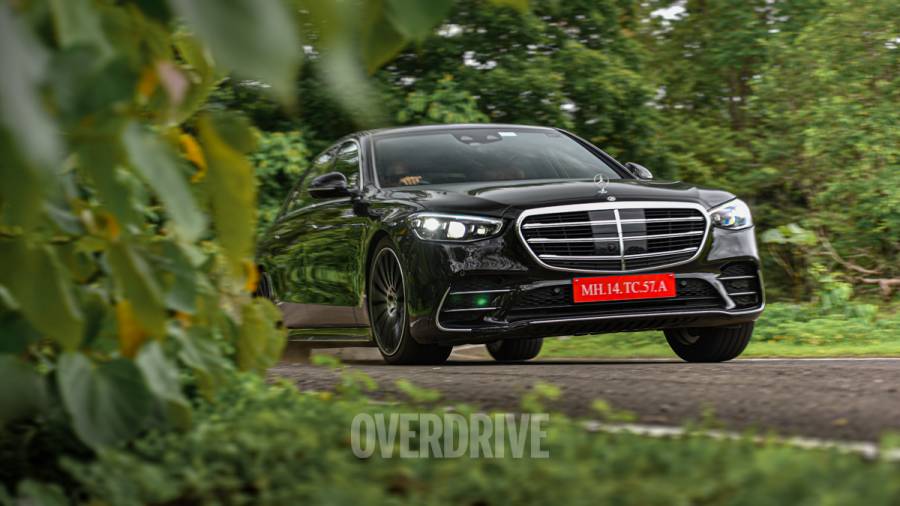 The 2021 Mercedes-Benz S-Class continues to retain its position as a flagship for the automotive industry, its many pioneering innovations like the rear seat airbag, the connectivity levels with OTA updates, the safety systems, the digital lights and the comfort and convenience features make it a compelling package. I actually felt quite privileged to have gotten my hands on this new S-Class, because all 150 units from the first lot were sold out before the car was launched and you're now going to have to wait for a second lot to arrive here.

Update: We have road tested the locally-assembled S350d, the model that replaces the S400d, priced at Rs 1.57 crore, ex-showroom. With the exception of rear-wheel steer, the driving experience remains largely similar to the CBU models. Figures below.

2021 Mercedes-Maybach S-Class: All you need to know 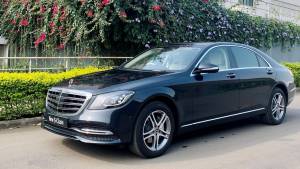