I have a thing for yellow AMGs. Like the first AMG GT in the country that I drove back in 2015, or the new GT R we unlocked last year with the road trip to Balasinor. Those coupés look stunning in yellow and I would choose a yellow GT R over a green one in a heartbeat. But would I buy the A 35 in yellow? Maybe I would - because I don't mind turning up to work wearing a pair of socks or a necktie that has the Tweety Bird and the rest of the Looney Tunes on it. But you still need to report an office space and going work in greyscale is your thing, maybe the yellow A 35 isn't for you. Maybe the A 35 isn't for you at all. 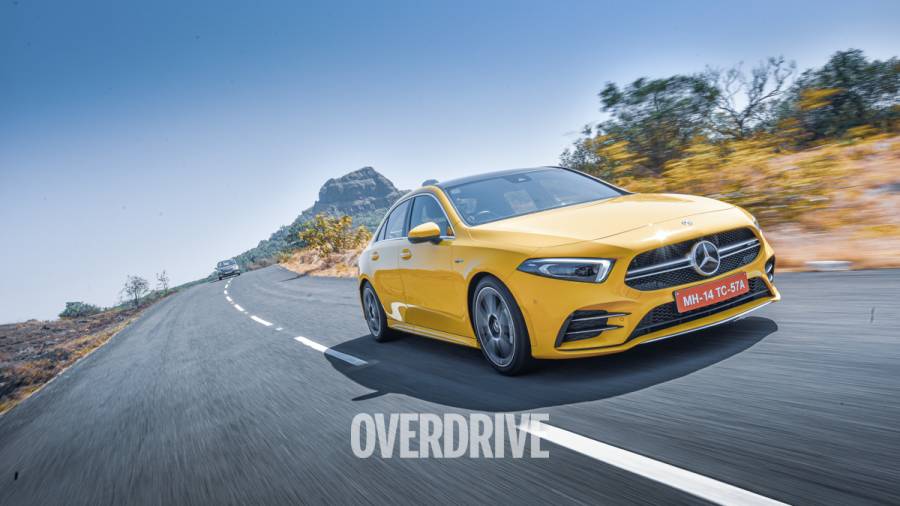 Design
It is a flamboyant little package aimed at those who are still very young and colourful at heart and while I did love the previous-generation CLA 45 AMG for what it was, I think the A 35 looks much sharper and has an even more athletic stance. The simple lines of the A-Class make the AMG bits stand out on the A 35 - like the more aggressive bumpers with larger air dams and splitters at the front and rear, and the cute little spoiler on the boot lid. 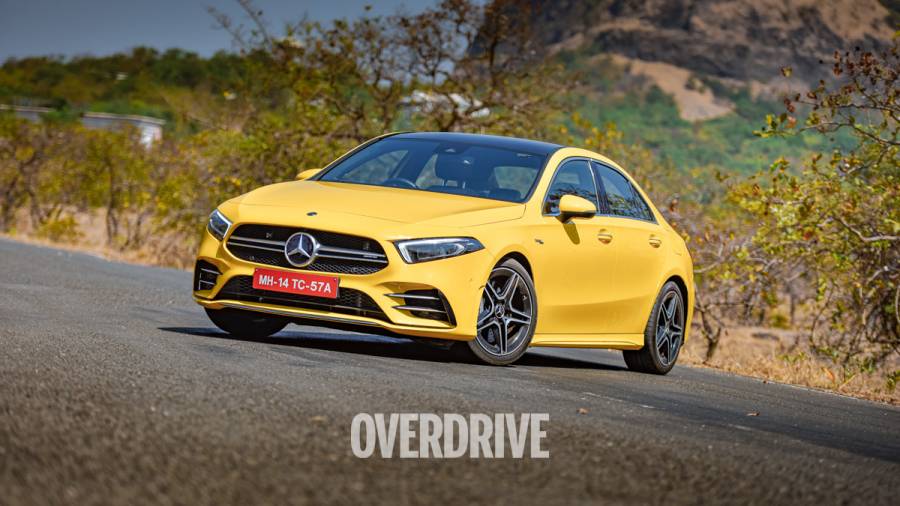 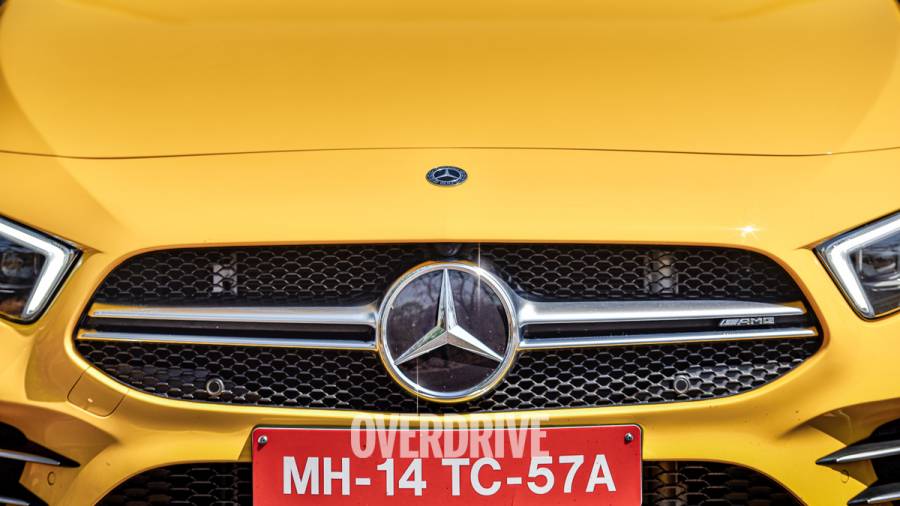 Of course, one can buy some of these things as accessories on a regular A-Class too, and then there are those jokes that people might make about these aerodynamic bits if you never really take your car to the track, but the sound coming out of A 35's twin, fully-functional tailpipes should put such concerns to rest. 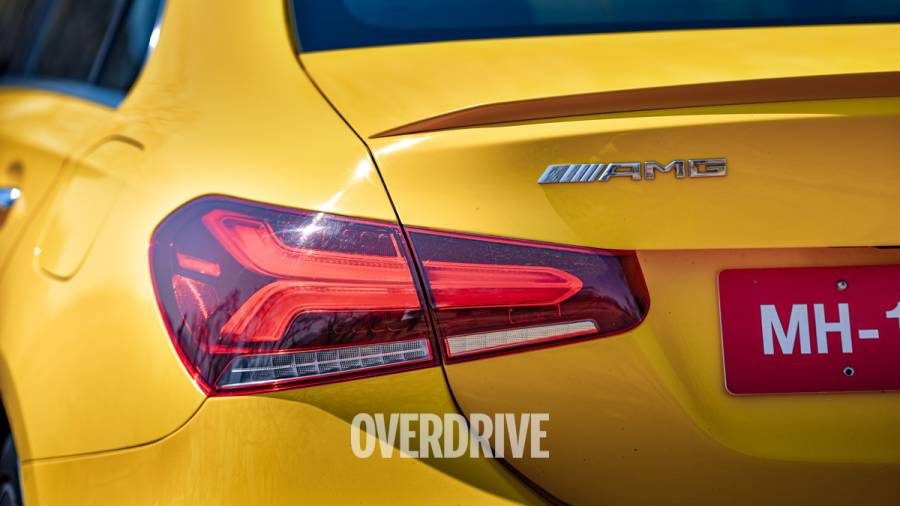 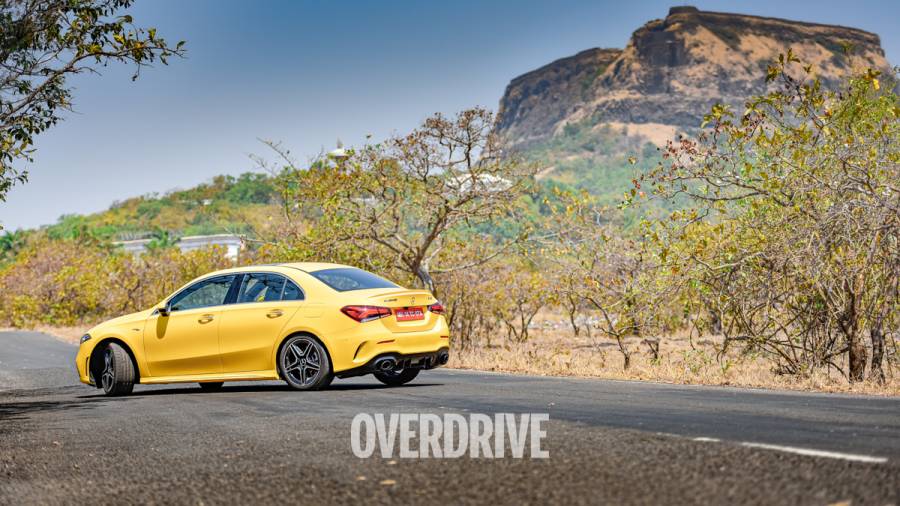 The powertrain
You may or may not want a flashy colour on an AMG sedan, but you most certainly want the aural drama from a car that wears that badge - and on the A 35 the notes are all there - transmission whines, intake acoustics, and the occasional crackles and pops - but they aren't as amplified and are usually overshadowed by the tyre noise and the irritating beeper past 120kmph (yes, even on an AMG!). So the A 35 may not wake up the entire neighbourhood the way an AMG GT's wheezing V8 would, but it will still get all the dogs barking. Engage Sport+ mode when the conditions allow it and it will get the enthusiast in you braking happily too. 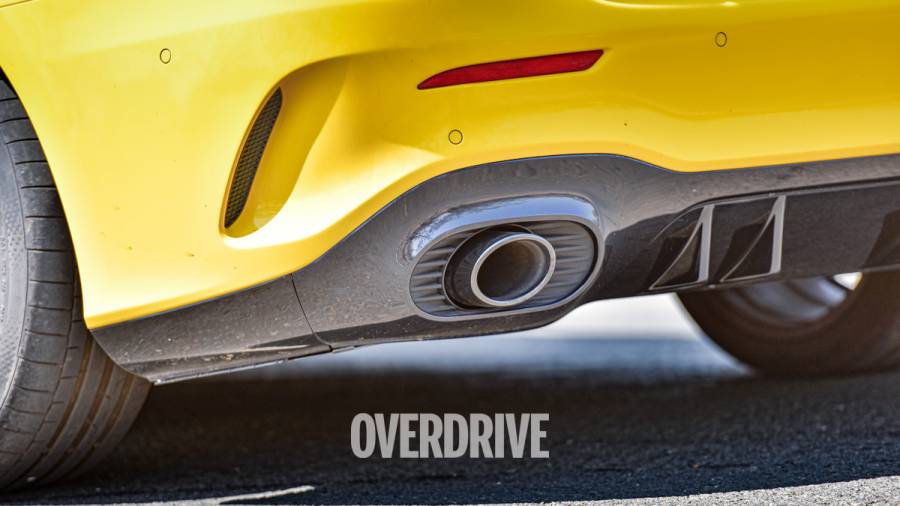 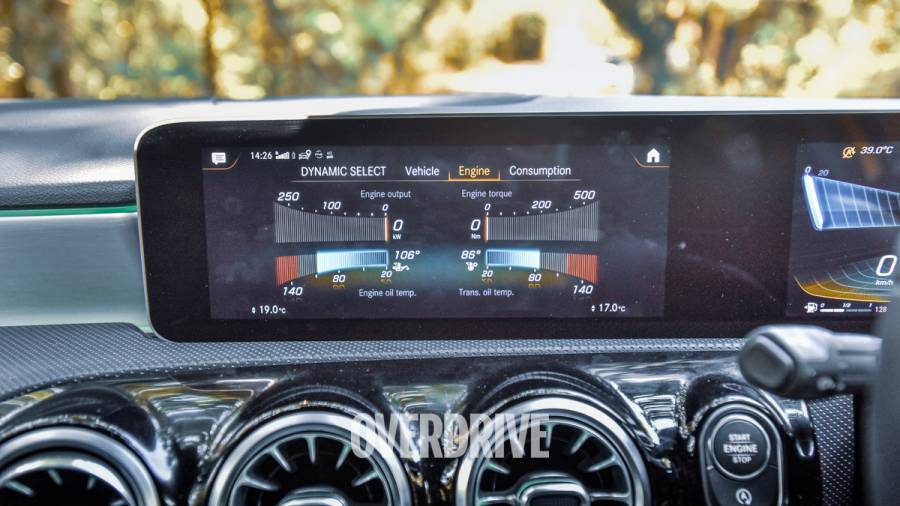 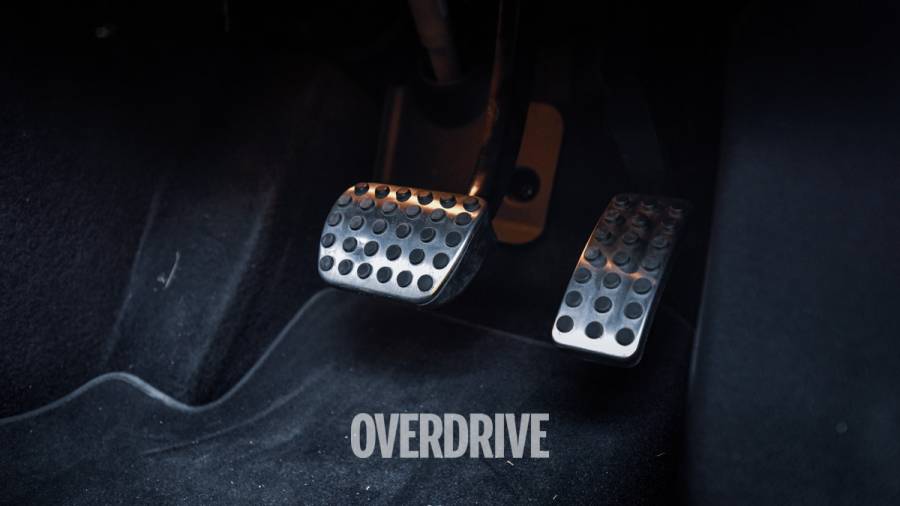 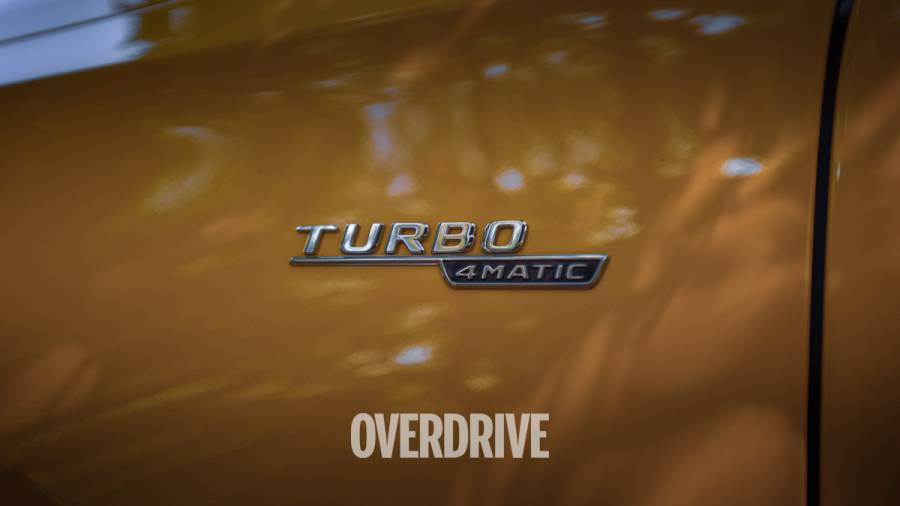 The motivation for that comes from a 2.0l four-cylinder turbo-petrol. And since you are wondering, this engine belongs to the M260 family which doesn't reside in the same pin code as the 1.3l M282 which was co-developed with Renault for cars like the A 200. It isn't hand-built and signed by an AMG engineer either, but it is certainly tuned by the team at Affalterbach for a heady mix of sound and performance that will tickle all your senses. That said, it feels less like a sports car engine for the road, and more like a road engine tuned to perfection for sporty performance. 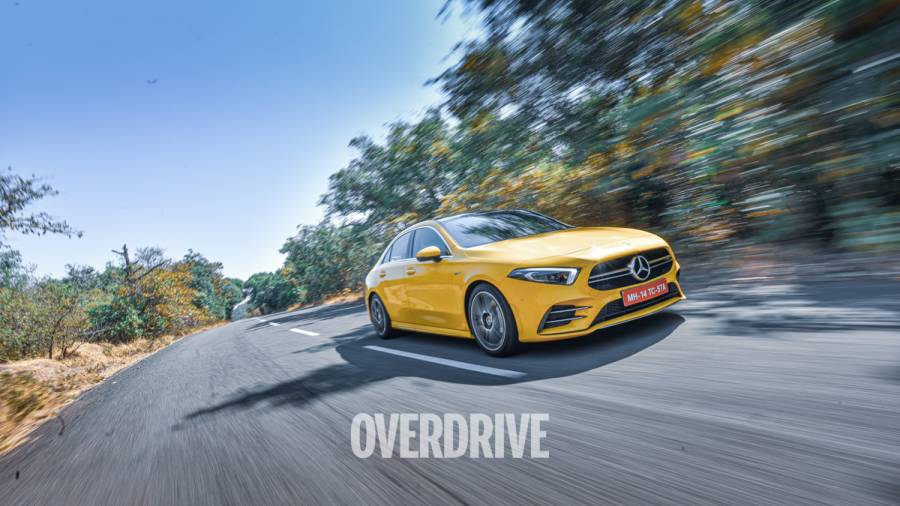 The engine is mated to a seven-speed dual-clutch transmission and redlines around the 6,500 mark - which is very similar to its A 200 counterpart but will make rapid progress if you rev that high through the gears. The gearbox runs AMG software, the ratios are all optimised for outright performance, and while it is generally quick to swap cogs, you could sense a bit of delay in it responding to sudden throttle input for pulling away out of a corner or getting that quick overtake on a crowded highway - nothing a manual override with the paddle shifters can't solve. Step on the gas and a 0-100kmph sprint is possible in 4.8s (4.9s tested) - which makes it one of the quickest cars under Rs 75 lakh to do the sprint in under 5s! 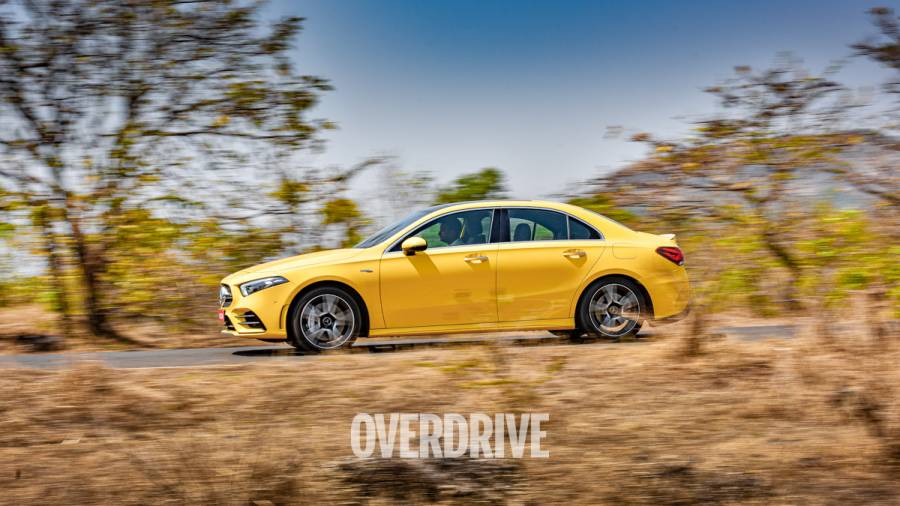 You could also get yourself something like an Akrapovic titanium slip-on system that will bring down that time further, add a marginal boost in mid-range performance around the 4-5,000rpm mark, drop the weight by a few and make the powertrain sound a whole lot better (and metallic) and because it is a slip-on system, it may not affect warranty either. Speaking of which, Mercedes-Benz India is offering the same eight-year warranty on the engine and gearbox as the standard A-Class limousine. The CLA 45 commands a good resale value in India and the A 35 should continue in that tradition with a warranty package like this. 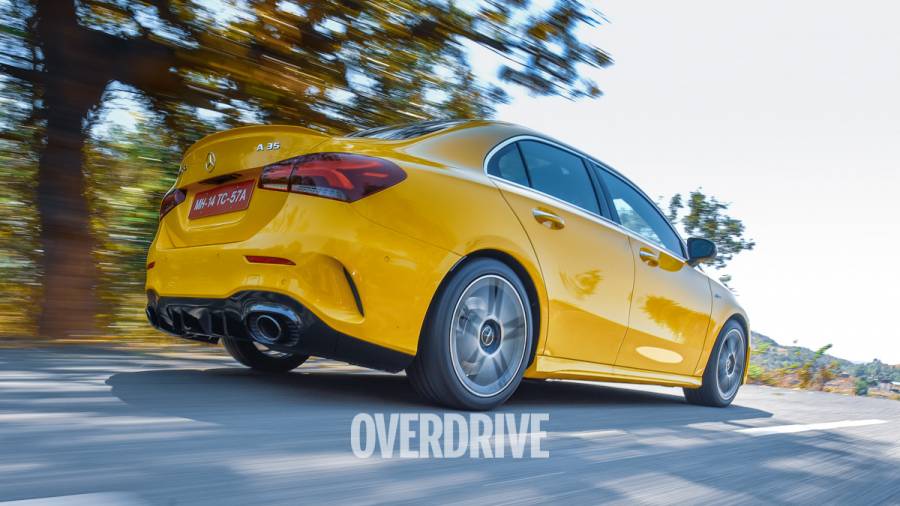 Don't think of the A 35 to be a standard A-Class sedan with a quicker engine and software though. The blokes at AMG have made tons of changes to the chassis elements - the subframe and steering are solid-mounted; the engine mounting is altered and made stiffer; the suspension components like the springs and anti-roll bars are AMG-spec for tauter body control and to that effect, they come with adaptive dampers too; the tyres are wider for better grip, and the brakes are larger with 4-piston callipers for better stopping power. The steering has a different ratio too to give you a better sense of control and feedback. The sum of all these enhancements is far lesser than the price difference between the standard A-Class and the A 35 - people spend a lot more money doing up Octavias and old Beemers and still don't get this level of performance and reliability. 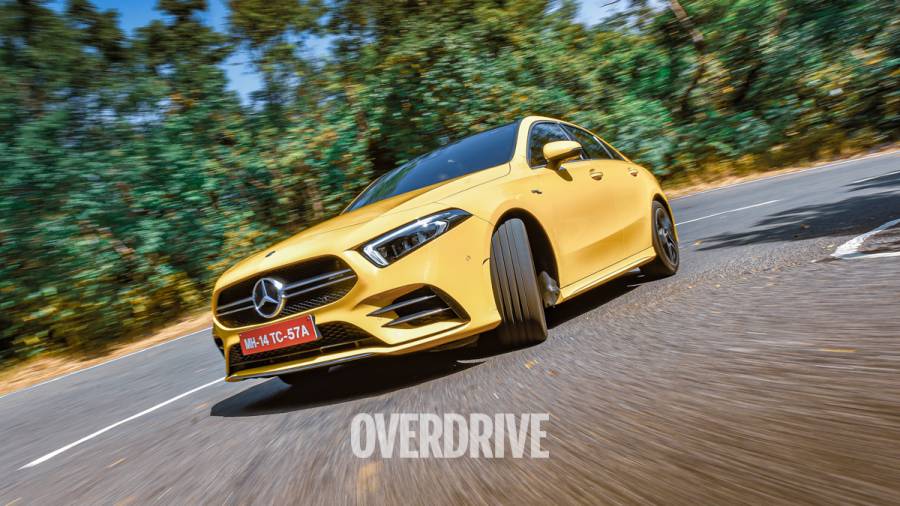 The other difference is the 4MATIC. Unlike the front-wheel-driven A-Class, the A 35 has a front-engine-all-wheel-drive configuration, which means that even if you are a bit overenthusiastic on tighter switchbacks, there is no over or understeer and you will usually make a dignified and quick corner exit. And around the faster, sweeping turns or the wide corners of a racetrack, you will be able to put the power down cleanly and get excellent pace around the track despite what the specs might suggest. What I'm trying to say is, the A 35 is like an obedient teenager and not a hooligan that you typically expect from the class of AMG. But all those bad boys reside in a much, much higher price bracket and the A 35 is a good starting point in that sense. 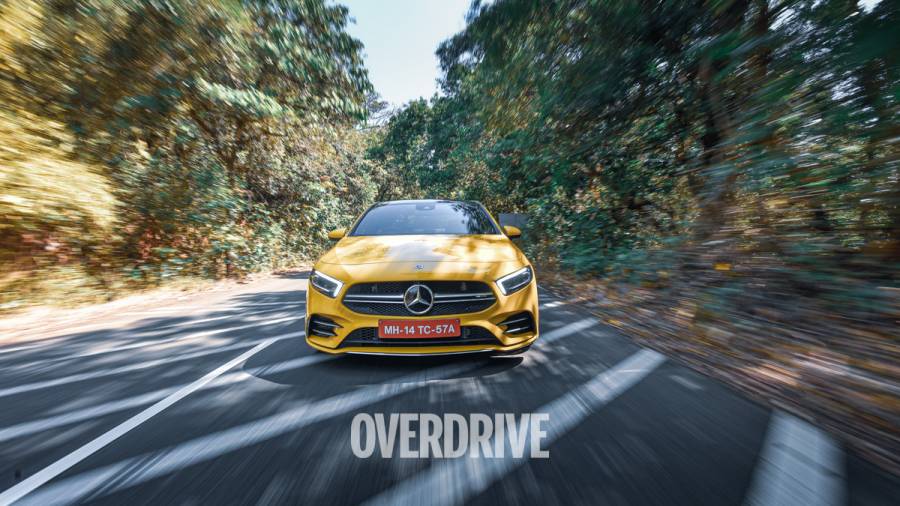 The cabin
And even though it is a starting point, it doesn't feel like you are purely paying for a badge and a few fancy crackles and pops. The cabin welcomes you to the new-age design and tech we have seen in the A-Class limo - replete with connected tech featuring on two 10.25-inch screens, the Hey Mercedes digital assistant, and remote capabilities for and Alexa and Google Home assistants, to list a few of the niceties. 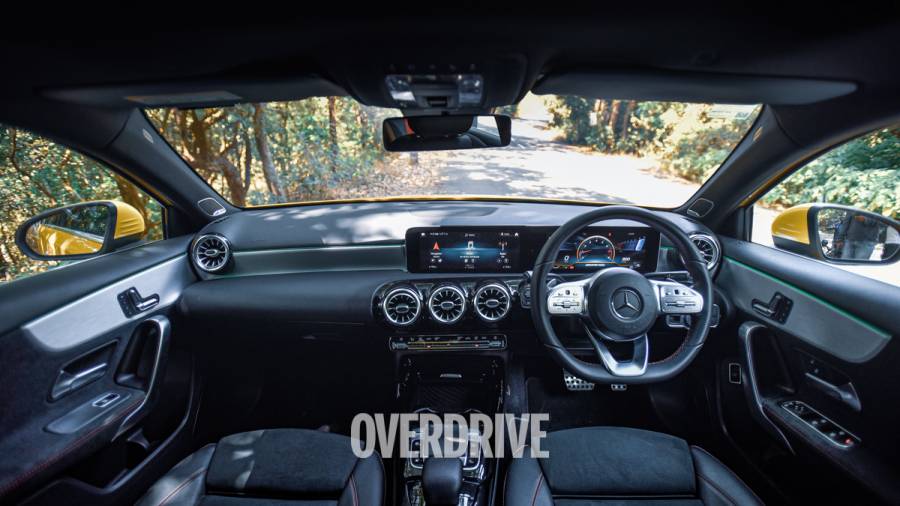 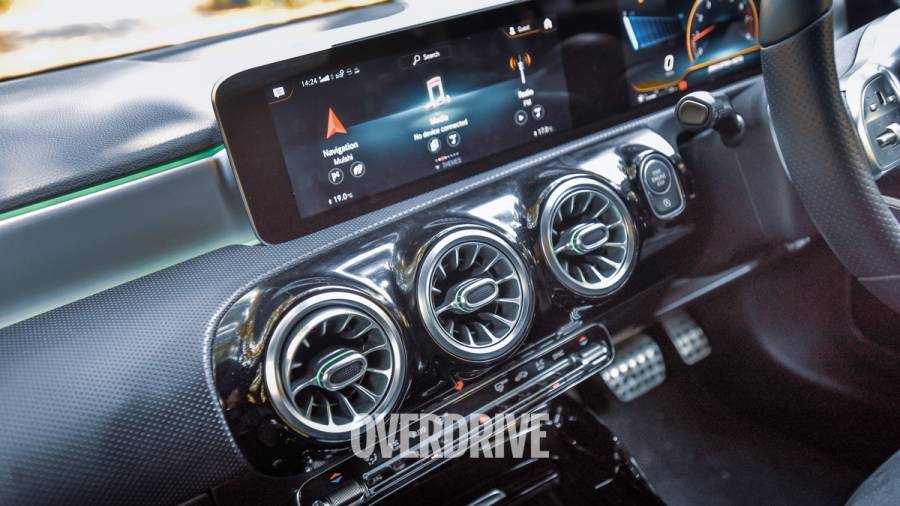 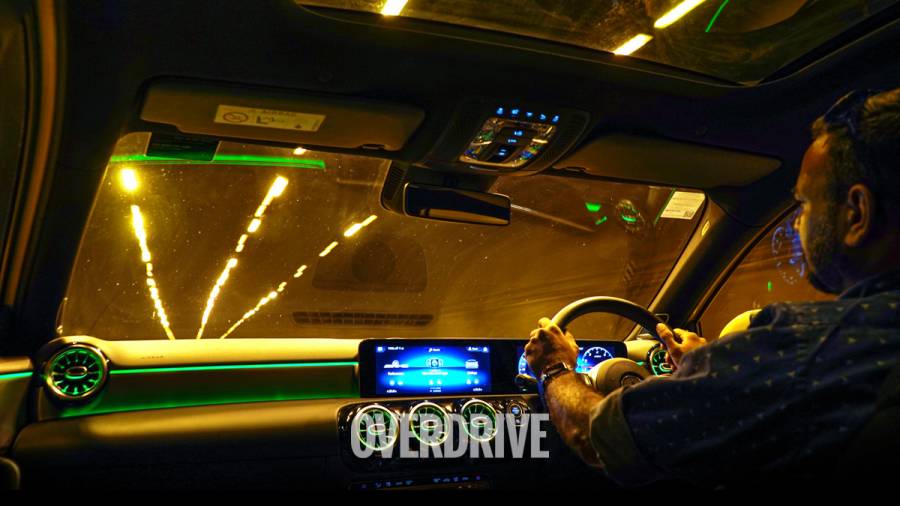 The cabin has an all-black layout with stain inserts and it looks best at night when the ambient lighting comes alive. There is the Burmester surround sound system to complement the lounge-like vibe, but the speakers are enclosed in a plastic housing and not metal as seen on the more premium Mercedes-Benz cars. The AMG-specific goodies include the red stitching and matching seatbelts that hold you safely in the snug sports seats. But if I was buying I would specify the car with the AMG performance seats that will hug you and hold you in place with their active bolsters, as you up the pace through the corners. 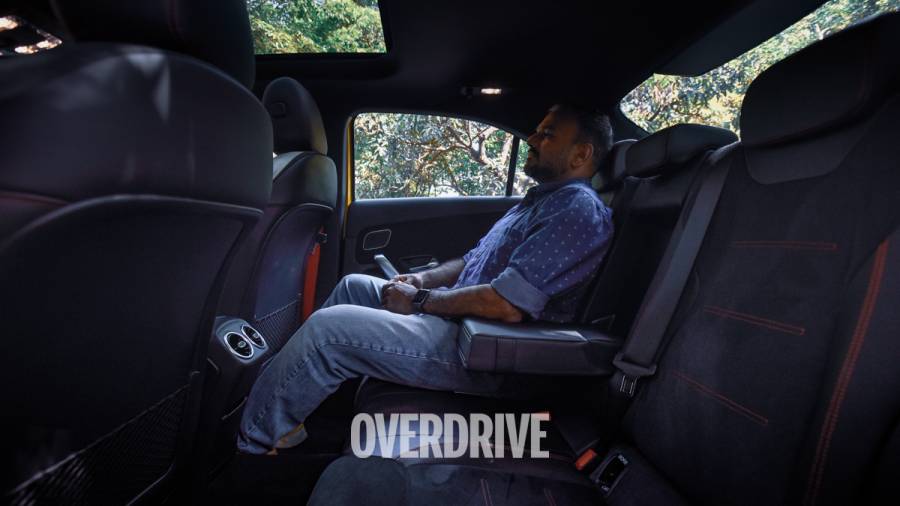 Verdict
If you thought the standard A-Class sedan we reviewed recently was spec-ed to the gills, then wait will you drive the A 35. Simply put, there is nothing quite like in the price band it resides in and despite this being a unique option in that sense, there is nothing about it that will feel like a compromise. 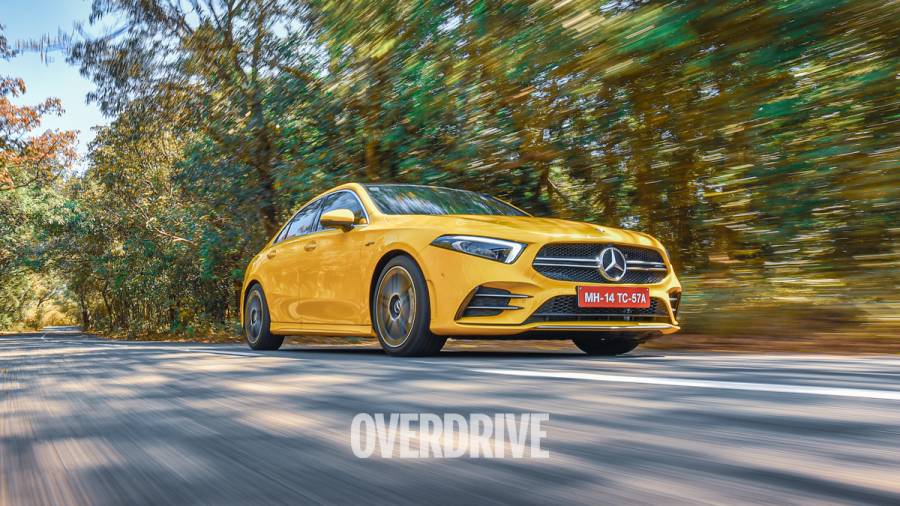 If anything the A 35 is a car that can belong on a racetrack just as nicely as it can sit in a business car park. That 'Sun' yellow though, is available only against order, so be sure of the environment you want to use it in before you sign the dotted line for one of these. Because not everyone can pull off going to work with a necktie that has the Tweety bird on it.