Honda's CR-V has had a mixed kind of innings in India and has never quite lived up to its potential. But all that maybe set to change. The new CR-V that Honda should launch in India by October is now powered by a powerful diesel engine and can seat 7. Based on an all-new platform it is much longer and the cabin is also more spacious. The 1.6-liter DOHC i-DTEC turbo diesel engine should widen its appeal too. With Honda assembling it in India, and maybe pricing it attractively, the likes of the Toyota Fortuner and Ford Endeavour, may have a serious competitor.

Though this is an all new generation Honda CR-V, the design looks familiar as it retains most of the styling elements of its predecessors. But now they are even more prominent making the new Honda CR-V instantly recognizable. While the new Honda CR-V has grown in size, so have its distinctive design features like the tall and wide flashy grille and the eye-catching front wheel arch that flows into the front bumper with the resultant downward sloping curve giving the front end an arresting look. The strong character line running from the front bumper across to the rear is also more accentuated and evident. 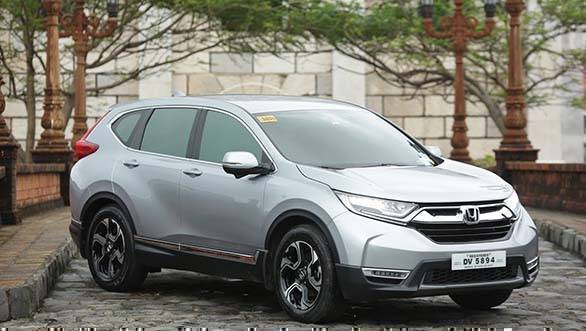 Styling enthusiasts and the aesthetically inclined may not appreciate the in your face kind of design, but even they cannot deny that the new Honda CR-V has loads of street presence and is difficult to disregard.

As mentioned, the trademark sharply cut lines and bulging curves are more explicit and the new Honda CR-V proudly carries even more chrome adornments. It's almost as if Honda has been inspired to dress up their new CR-V like an Indian bride, who most never fail to observe. The easily noticeable body cladding adds more muscle to the CR-V's looks and the sizeable headlights and taillights impart a further sense of strength to the design. 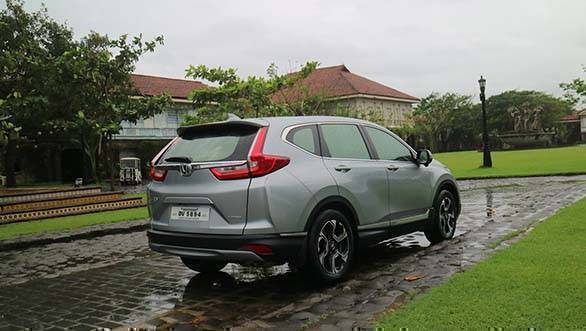 Handsome it may not be, but the new Honda CR-V is certainly an SUV that makes its presence felt.

The biggest change in the new generation Honda CRV's passenger compartment is that it is much larger and can now seat 7. While the room for the 3rd and last row occupants is really quite limited and useful only for little children or for very brief journeys for adults, the space in the front and second row has increased substantially. In fact the second row rear seat of the new CR-V has to be amongst the most spacious and the fact that the seats also have sliders to take them forward or back, makes it that much more comfortable. With the 3rd row raised, luggage space at the rear is a paltry 150 liters. But fold it and the cargo area increases to 472 liters. Of course the 2nd row can also be folded to further enhance the boot space. 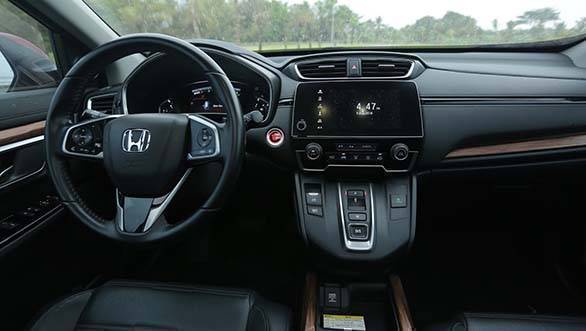 What will surely be appreciated in our hot summers are the A/C vents for all three rows. The new Honda CR-V actually has a total of 10 A/C vents, 4 in the front, 2 in the back of the console for the rear seat and four more mounted in an overhead panel that direct air on the both the 2nd and 3rd row occupants. But cooled air being blown directly onto the top of their heads, is something that may not be to everybody's liking. This overhead panel housing the A/C vents and controls can also restrict headroom for those sitting in the centre of the second row seat.

The driver's seat on the top trim models is fitted with an electric 8-way power adjustment with 4-way lumbar support that provides notable levels of comfort. What is even nicer is the commanding view. The high seating position, narrow roof pillars and low set dashboard combine to give a vast all-around view. 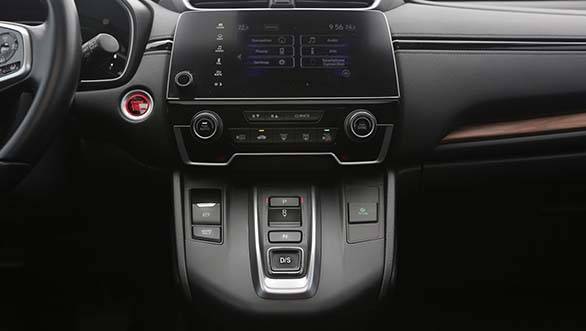 The interiors are not only comfortable but also well finished with nice looking and good to feel materials. At the center of the comprehensive infotainment system is a 7-inch touch screen that offers all sorts of multimedia and hands-free functionality along with a multi-view reverse camera with dynamic guidelines. The instrument cluster of the new Honda CR-V is very sensibly designed with both the engine rpm and vehicle speed being easy to read. In fact the meter displaying all this information is so compact; that it almost appears to have inspired by a motorcycles instruments.

The biggest change and one that has the capacity to transform the Honda CR-V's journey in India, is the new 1.6-liter i-DTEC turbo diesel engine. Interestingly, this single turbo diesel engine is made at Honda's plant in India, and apart from being fitted in the version we drove in the Philippines, will now also be provided in the made for India CR-V. It has an aluminum block and we are told the pistons, crankshaft and connecting rods are smaller and lighter too, resulting in reduced frictional resistance between components. The fairly light engine produces 120 PS at 4000 rpm and 300 NM of torque at 2000 rpm. 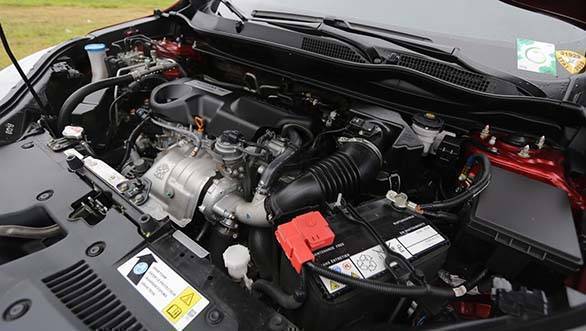 Aluminum block diesel engines are generally noisier than ones with iron blocks, but still this Honda diesel is decently silent and fairly quick to respond and revs quite happily. It's only audible at idle or low speeds, and as the speeds rise, the diesel clatter is far less noticeable.

This diesel engine is mated to a new 9-speed automatic transmission with a push-button electronic gear selector. You have separate buttons to select drive, neutral and park, and reverse is also engaged by pushing down another button. The electric parking brake (handbrake) button is placed nearby as is the Econ drive mode button, which shifts gears earlier and enhances fuel efficiency. All these buttons are placed sensibly and fall to hand easily. In fact the overall ergonomics of the new Honda CR-V are so good that you rarely press a wrong button, making it a very user friendly vehicle. 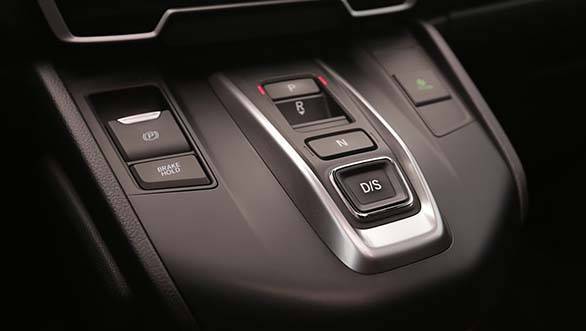 The 9 speed automatic also comes with paddle shifters and having 9 different gear ratios means more flexibility and one can cruise all day long with the engine rolling over at low revs. This not only aids refinement and NVH levels, but should also produce better fuel efficiency, especially on the highway. This is of course something we will test when we get to drive it back home in India.

On driving the new Honda CR-V, what is apparent almost immediately, is the very accomplished ride quality. The earlier CR-V also provided good ride comfort. But the new one which is longer and wider and has a bigger wheelbase too, appears to tame most undulations and imperfections in the road, in an even more pleasing manner. 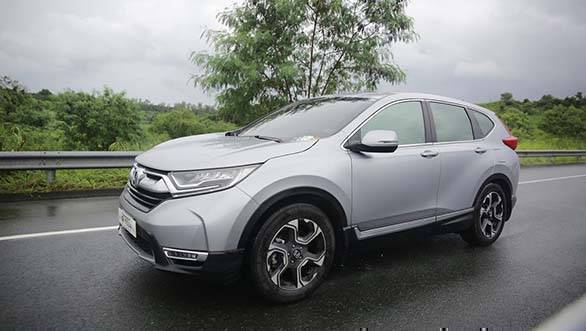 Some variants of the new CR-V also have all-wheel and like earlier, power is delivered to all the four wheels when the driving conditions demand or require it. But those who often venture off-road, will be disappointed that there is still no all-wheel drive lock that gives them the option of engaging it as and when they find it necessary.

The new Honda CR-V feels light and agile on its feet and positively responds to driver inputs. The stiffer body structure and wider front and rear track along with the well sorted overall driving dynamics make this a fairly fun to drive SUV. Braking is good too and even though we encountered wet conditions on our drive, in some of the hilly sectors we were able to comfortably do much higher speeds than expected. The all-wheel drive also helped improve traction and give better stability on the slippery roads.

Along with the new platform and changes in the chassis, the new Honda CR-V also has increased ground clearance, especially the AWD version. The ground clearance of the AWD is an impressive 208 mm while the 2WD models stand at 198 mm. But the final tyre and wheel combinations Honda offers with the CR-V in India and what the actual ground clearance is for our versions, remains to be seen. 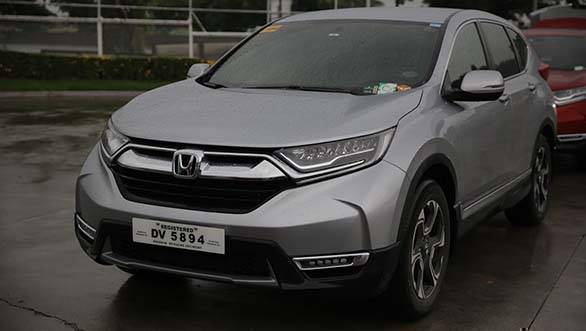 Honda will continue to sell a petrol powered version of the new CR-V in India, and from what we understand, this will the two-wheel drive or front-wheel drive version and available only with the 5-seater interior configuration. 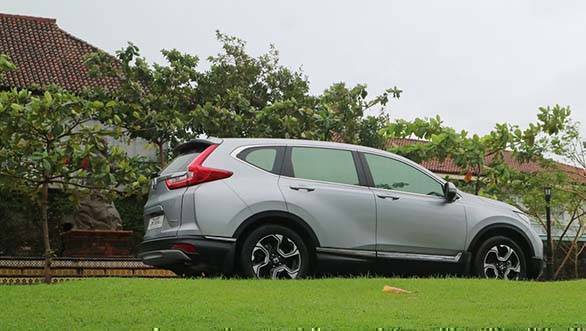 But one feature we hope is offered in our country is the 'Lane Watch Camera'. If you turn on either the left or right indicator, and if other vehicles or objects are too close, then the video feed from the cameras mounted below the outside rear view mirrors, beams the image of the entire side of the new Honda CR-V on the central display. This should be really useful in our country where you have people often sticking extremely close. There is also a button on the indicator stalk that you can push to activate the 'Lane Watch Camera'. 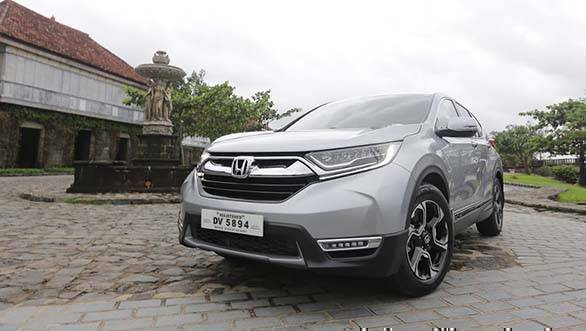 The new Honda CR-V has a lot of promise and if priced right and offered with the correct equipment, it could make a strong case for itself and be a serious contender in the premium SUV segment. 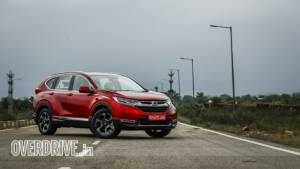 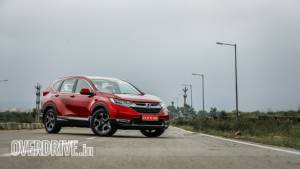 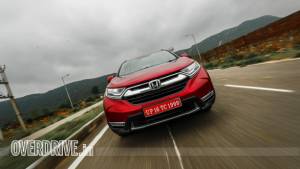