Hero MotoCorp had showcased this scooter as the Duet 125 alongside the Maestro 125 during the 2018 Auto Expo. They renamed it the Hero Destini 125 to separate it from the lower capacity Duet 110 and position the 125cc scooter as a more premium vehicle, and not just a Duet with a bigger engine. It is now the two-wheeler maker's first offering in the 125cc space. Hero calls it a family premium scooter, the kind that will go up against the established competition of the segment including the Honda Activa 125 and the Suzuki Access 125. So here we are, with a very quick ride through the streets of New Delhi, does the Hero Destini 125 have what it takes to jostle for space with its popular rivals? Let's find out. 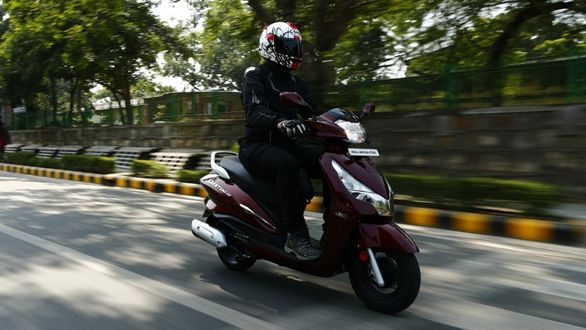 Hero had shown the scooter in production-ready guise during the Expo. And that is the design we see on the Destini 125. Hero MotoCorp has tried to play it safe with a design that should find appeal within its target 'family premium' space. This entails smooth, flowy lines and swathes of chrome on an all metal body. Hero calls the large-ish panel on the front apron a 'chrome chest'. And then there are the chrome accents on the side panels, as well as a large 3D Destini 125 logo. 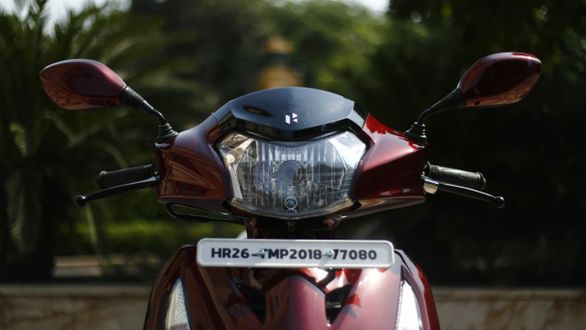 Hero's head for global product planning Malo Le Masson says that the intent with these subtle patterns is to signify strength and solidity of a honeycomb. The Destini 125 is available in four paint options, Chestnut Bronze, Panther Black, Pearl Silver White, and Noble Red. Our review vehicle had the latter and it looks rather sophisticated matched with blacked out cast alloy wheels on the higher VX trim. 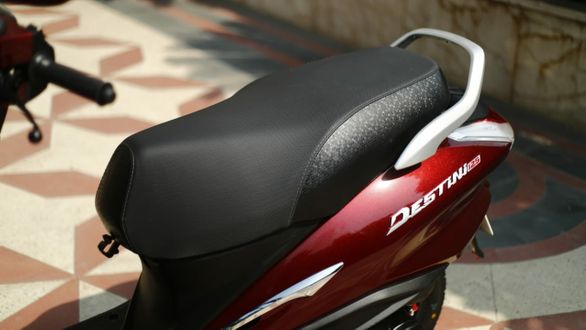 On the whole we see a well put together scooter with respectable panel gaps and plastic quality, without any creaks. The Destini 125 is solidly built in most parts and looks like it could weather long term usage well.

What are the features?

Hero MotoCorp has taken its time to enter the 125cc space, but it has used this time to form its own strategy for the segment. As part of this, they have launched the Destini 125 in two trims - the base LX priced at Rs 54,650 and the higher VX for Rs 57,500 (both ex-Delhi). The two trims allow the Destini 125 to compete in two price ranges, with the premium 110cc scooters as well as the 125cc ones. For the higher price, the VX receives a host of additional features. 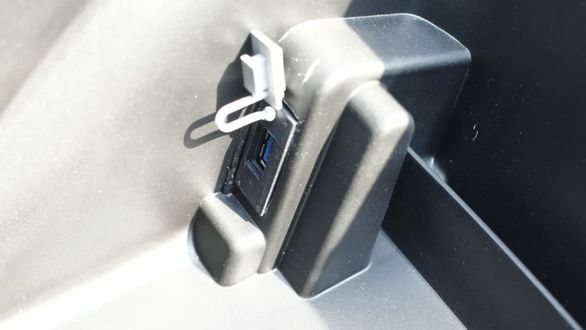 These include the aforementioned chrome garnishes at the front and sides, remote key opening, USB mobile charging point and LED light for underseat storage, body coloured mirrors, cast alloy wheels and the dual-textured seat. These are also available as options on the LX trim.

The Destini 125 is also the first scooter to receive Hero's idle start stop system (i3s) technology, for better fuel economy. Masson says internal testing pegs the i3s as giving up to a 10 per cent advantage in fuel consumption, which is an ARAI-tested 51.5kmpl.

i3s is also perfectly suited to the urban environment of stop-go traffic, where plenty of times the scooter may be waiting at traffic signals in idle. It switches off ignition after 5 seconds of idling. To switch it back on, you pull on the brake and give a slight twist to the accelerator. The system worked fine during our quick ride and did not need much time to get used to. 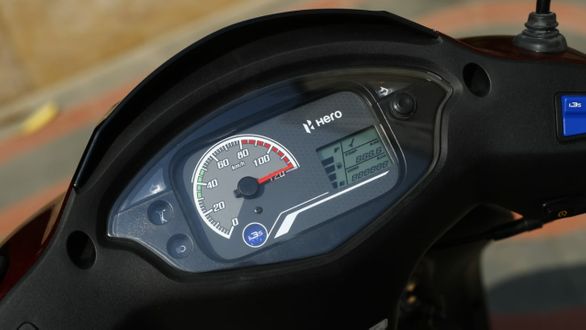 The Destini features a digital analog instrument cluster which also features a side stand down alert as well as a service due reminder. One good addition to features list is the external fuel filler cap behind the pillion seat. Like the seat, it too can be unlocked from the ignition keyhole and you even hear a loud beep if you decide to switch on the ignition with the cap unlocked. This system is both convenient and safe. 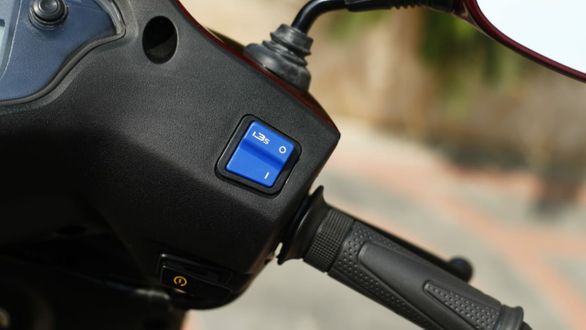 Another first for a Hero scooter is the high-low pass switch for the headlamp, which is convenient to reach with your left thumb and can be of use if your commute includes carriageways. The 19-litre boot can take in an ISI-approved full-face helmet.

Overall, it has a good list of features and we would pick the VX for the useful add-ons. 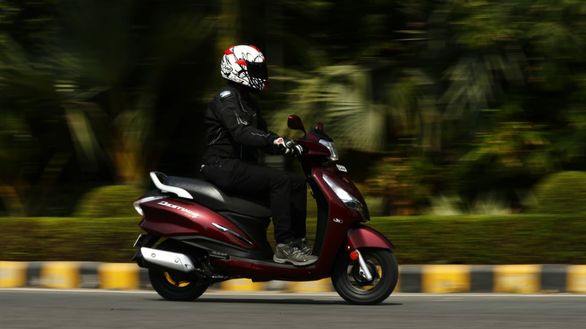 The Destini comes powered by a 124.6cc air-cooled single derived from the Duet 110, as do its underpinnings. This engine produces 8.7PS and 10.2Nm, which 9 per cent and 17 per cent higher, respectively than the 110cc engine. These figures are at par with its direct rivals.

Start it up and the note from the barrel-shaped exhaust has a subtle but deep character. The Destini 125 weighs 111.5kg, in line with the Access 125, but the power is enough to make the weight a non-issue. Peak torque comes in at 5,000rpm and carried the scooter in a linear manner up to the 85kmph speeds we managed. It felt like it could easily go higher even at those speeds, but we chose to not venture beyond in heavy Delhi traffic. 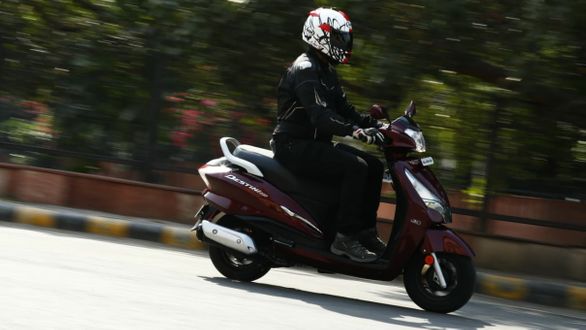 On the move, the body weight does not seem to be an issue at all. The Destini 125 may not feel to be quickest off the line, but acceleration never feels lacking when I give the throttle a twist. More importantly, the linear delivery of power keeps things smooth at varying traffic speeds. The refinement from the engine is good too.

As is tractability. The telescopic front forks and rear monoshock are ever so slightly on the firmer side and respond quickly to road undulations. I am happy with how well the Destini does going through bad patches in a composed manner, with no creaks or thuds. The handlebars, seat, and footboard positions are comfortable, leading the knees of this 5'10" reviewer to form a right angle when seated. Even at full lock, the knee is not scraped by the handle.

Yes, you can make tight U-turns with both feet off the ground at slow speeds. The weight balance is good, resulting in confidence during manoeuvres even at higher speeds. The 10-inch wheels make it easy to zip through traffic. We will know how well it handles sustained high speeds when we road test the scooter. 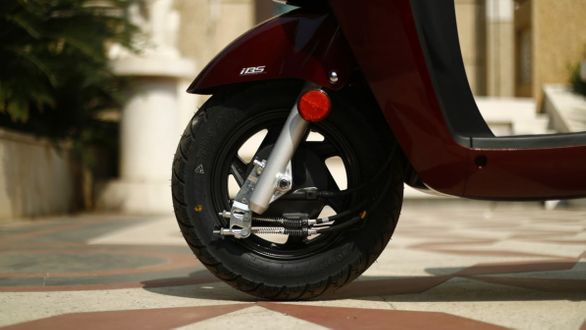 The brakes are drums at both ends with no option for a front disc brake. Hero has added integrated braking for simultaneous engagement of front and rear brakes. The system's front-rear bias is managed well and brings the scooter to a halt quickly from speeds around 50kmph. The levers give good feel and feedback is subdued. Sudden braking from 40-50kmph too did not hamper its composure.

The mechanicals have been packaged well and this adds to the feeling of riding a more premium scooter. It is not the most refined nor feels the quickest, but neither does it fall too far behind its peers. 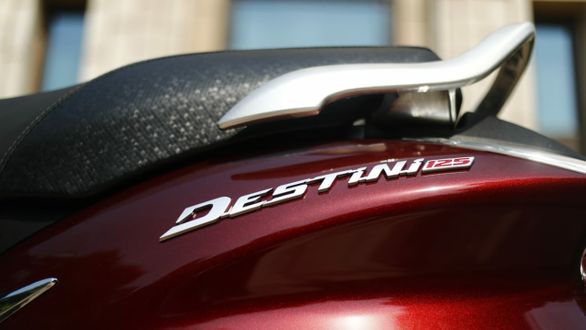 We had a very short time aboard the new Hero Destini 125 so it's unfair to judge its abilities and place in the segment. However, what we can say is that Hero's late entry into the segment is justified in the scooter it has launched. The combination of subtle design, solid-feeling build, competent refined engine, and smooth performance with good ride and handling makes the Destini 125 a good package. We would have liked to see a front disc brake option at least. Hero aims to target 110cc buyers with this 125cc scooter as well. Whether that strategy works or not will remain to be seen. But add its features and the lowest price amongst its 125cc rivals, and the Destini has all the makings of a value champion in the premium segment.