I got into the 1977 BMW 528, the top-flight car in the very first BMW 5 Series range. The 12km I spent in the car gave me an appreciation of how hard the BMW 5 Series is as a car that a team of engineers needs to make. You see making the BMW 7 Series needs a lot of careful work but the goal is simpler - luxury.

The 3 Series is simpler too, sportiness at an intended price. The 5 has to straddle a balance between these two and that makes it a challenging car to make. Presenting now is the new BMW 5 Series, set to come to India shortly. Say hello to the seventh generation of the venerable line from Munich. 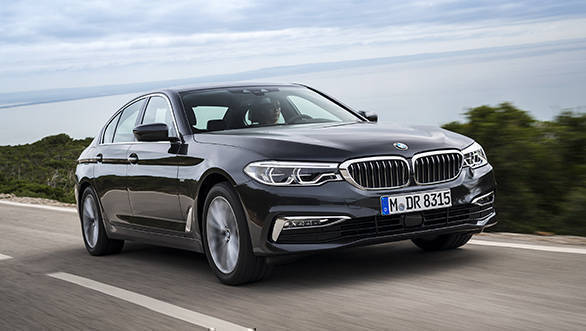 The new 5 Series sedan doesn't look startlingly new. It certainly looks fresher parked next to the outgoing model. To do this, BMW designers gave the 5er's skin a gentle cleanse, as it were. The big notable change - and I like it - are the full-width headlamps that now connect up to the kidney grille. The grille, in itself, is now the wide and squat one like on the 7 Series. Inside the kidney grille are slats that now close to offer a further 10 per cent reduction in drag. It gives the car more body despite the fact that the new 5 isn't significantly larger than the old in any dimension. 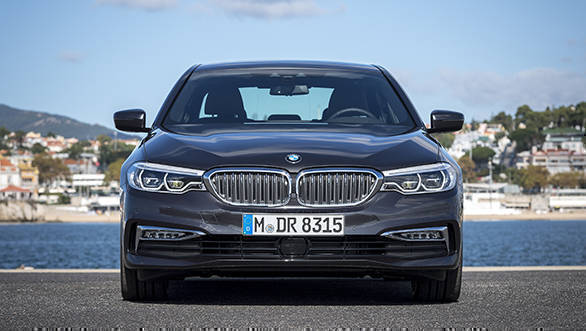 The big design change is a minor one. I revel is the slightness of the new crease on the side body that rises from the front wheel to the Hofmeister kink. It's a fairly subtle touch that carries more than its weight in terms of differentiating the car from its family of siblings with numeric monikers. The design also works towards saving weight here and there, and the total adds up to 100kg saved over the previous car. The highlights include the use of aluminium, high-strength steel and magnesium. I guess the carbon-fibre goodies will come in the next mid-cycle update. The kinds of changes? My favourite is the parking brake which is 2kg lighter. It used to have its own calliper and now it doesn't. It's part of the main brake calliper now.

As usual, there are a whole host of engines that you can choose from including powerful or efficient petrols and diesels. There are also the EfficientDynamics cars as well as the 'e' suffixed plug-in hybrids. Plus the M550i and M535i sporty variants and eventually the new M5.

For India, two engines are slotted as sure-shot arrivals, and the M5 will of course go on sale in time. 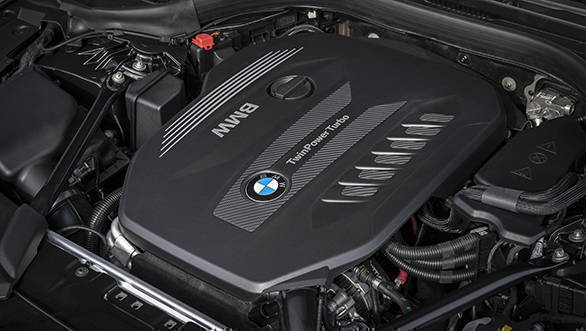 The diesel, which will probably carry the bulk of the volume, is the 530d for the initial phase in India. We drove the xDrive (all-wheel drive) variant. The TwinPower turbo-engine equipped 530d produces 620Nm from 2,000rpm to 2,500rpm and peak power is 265PS. The straight-six is substantially more powerful than the outgoing engine and it'll fling the car to 100kmph in 5.7s.

The 520d is the 4-cylinder diesel that will likely to come to India later. It's no pushover making 400Nm between 1,750-2,500rpm while peak power is 190PS. Fuel economy is claimed to be just under 25kmpl under European test conditions! Like all the other cars here, top speed is limited to 250kmph while 100kmph comes up in 7.7s.

In essence, the BMW 5 Series has expanded the range of its abilities in the new generation. And by that I mean that it feels more comfortable in comfort mode while being a reasonably sporty-luxurious fast car when the occasion demands.

But make no mistake, this is a hard target. BMW attacked with double wishbones in the front and a five-link rear suspension. These are lightweight components just like in the new 7 Series. As you know shaving unsprung weight (parts not supported by the suspension) produces an outsize dynamic and comfort benefit. The car grows slightly in dimension on the chassis front - the wheelbase is 7mm longer, the track is wider both front and rear too.

BMW claims the switch to double wishbones allows a much finer set-up. But while BMW also claims clearer steering feedback, the days of ultra-clear steering feel are behind us, I think in the context of the entire four-wheeler industry, outside the rarified world of supercars.

Just like the front suspension, the rear is lighter and stiffer too. BMW has also spent time reducing the transmission of suspension noise into the cabin.

BMW has fine-tuned the brakes and retuned the Dynamic Damper Control to make the comfort mode more supple while making the sport mode more responsive. This generation also allows BMW's xDrive all-wheel drive system to work with both the active steering system and the lowered M Sport suspension option.

The cars we drive also had the optional Adaptive Drive system which controls the dampers as well as employs active roll stabilisation - now electric motors rather than heavier and slower hydraulics - to enhance comfort or dynamics as per the mode selection. It also has an automatic mode where the car uses, among other things, the GPS to see what is coming and select appropriate settings.

The point is that all these systems do make their presence felt to be sure. Leaving the car in fully adaptive mode does produce a change from a comfortably supple car down the straight to a tauter, low body-roll cornering stance. It feels natural and makes the 5er feel alert as well as comfortable.

Down the motorways, the Comfort mode produced, as expected, a competent highways car that keeps the undulations and bumps at bay well. There's a noticeable improvement over the previous car in how much the new 5 absorbs. Sport mode isn't all-hardcore but the car certainly stiffens up, and the responses as well as your sense of grip amp up nicely.

The big talking point of the new car is the fiesta of semi-autonomous systems, or "automated driving" as BMW calls it. The one I tried most often is the automated overtaking/lane change. You essentially hold down the indicator gently and the car checks the lane on your left or right as per your preference and makes the change of lane. It reads traffic as well as lane markings to achieve this.

While adaptive cruise control and lane keeping assistance both work well enough, the lane change system still trips up now and then. On two occasions, I had to intervene and correct the car as did, on other occasions, the other journalist who was sharing the car with me. To that extent, the BMW's system has potential and needs accurately marked roads etc. to function well. Not quite there yet.

We didn't get to try them out but the 5er has the ability to carry on a fair bit of communication with other cars and street infrastructure. This is crucial to the prospect and efficacy of automated cars in the future. 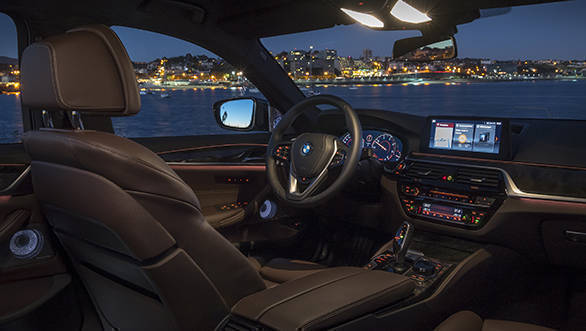 The 5er has a familiar cabin that takes quite a few cues from the 7 Series. It's a comfortable and spacious cabin with neat touches. But the talking point is the bright and responsive 10.25-inch touchscreen that is mounted like a tablet atop the centre console. Between that and the much bigger head-up display, reading navigation and vehicle and speed limit information is remarkably easy and unintrusive. On the flip side, my polarised sunglasses instantly cancelled out the head-up display - something to think about, BMW. 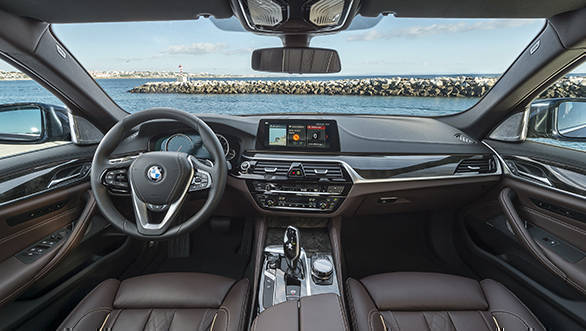 The seats are big, comfy chairs with a lot of adjustability, and they feel right for long drives. As befits a car of this stature, massages and ventilation and more are either standard or optional. 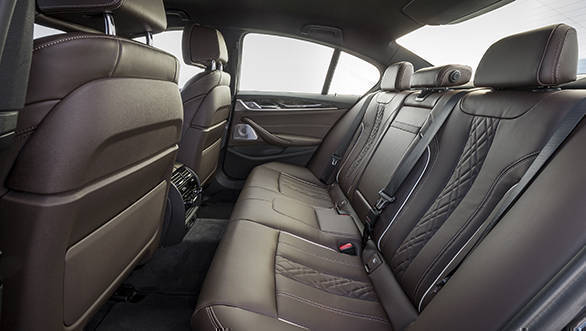 BMW has also added a noise-cancelling treatment to both the headliner and the front windshield to quieten down the cabin. I didn't try out the music system, but a 1,400W optional Bowers & Wilkins system, I'm reliably told, is a beauty.

BMW will launch the new 5 Series in India in the middle of 2017 after its global launch in February 2017. The initial engines are set to be the 530d and the 530i, and other engines and variants, including the 520d and the M5, are expected to arrive later.

On the whole, the BMW 5 Series has become a little more businesslike rather than lively. But it isn't a bad thing. The suspension set-up and adjustability, for example, makes the car more comfortable when you want it while allowing you to experience a significantly sportier turn of pace when you want it. The handling is secure and the grip is enormous which means your ability to get work done or let your hair down is both well within the grasp of this car.

There was a time when I found BMW in-car systems a little too abstruse to fully use, but I can say with confidence that the new systems work well. I'm still not a fan of gesture control - it works but I don't see the big benefit. But the head-up display, the new touchscreen and  the iDrive controller seem more at ease with one another, and controlling the systems is easy and intuitive. The cabin is quiet, spacious and comfortable, and that's exactly what you're looking for in a car in this class.

The 530d with its 8-speed transmission is a good engine to have. It quietly wafts down the motorway when you want it to but is able to shove a whopping 620Nm of torque to the wheels if needed which produces excellent progress should you want it. BMW points out that the new 5 manages this while offering more economy as well as better emissions performance, especially in EcoPro driving mode where it optimised a plethora of systems to maximise economy.

The BMW 5 Series is an iconic car in BMW's line-up because it sits bang in between the smaller 3 and the full-house 7. It's a hard car to make in the sense that the balance between luxury, comfort and sportiness is particularly delicate. But it appears that BMW, for the seventh generation in a row, manages the tightrope act rather well! 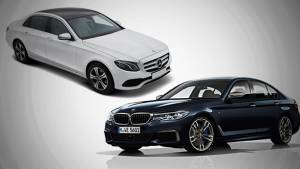 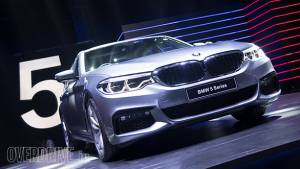 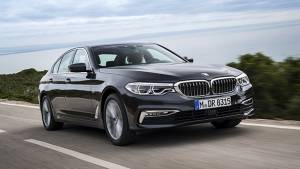