The word 'Avventura' is Italian for 'Adventure'. Couple the English word with 'Fiat' and it could remind you of its namesake from a decade ago. In recent times though, the Avventura name became popular with the jazzy orange crossover concept that Fiat showed at the 2014 Auto Expo in New Delhi. Guess what, the Avventura has made it to production and surprisingly, it looks almost as radical as its conceptual avatar! 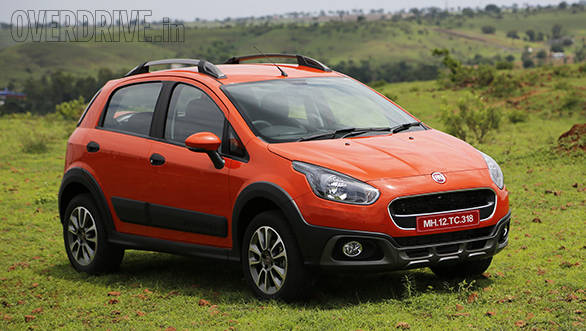 The Avventura gets the Punto Evo's base design, so you have the new swept-back headlights with the extended brow

The vehicle still follows the same path as the previous Adventure - a rugged bodywork and updated suspension setup that enables it to be better at tackling off-road and broken road surfaces than the hatchback it is based on. It isn't a hardcore off-roader though and while the previous Adventure had station wagon proportions, the Avventura is essentially a heftier Punto. It employs the Punto Evo's base design, so you have the new swept-back headlights with the extended brow. These don't have projector lights like the concept though. The tail lights and the rear bumper-mounted fog and stop lamps are the same as the hatchback too.

But what gives the Avventura its distinction is the spare wheel on the tailgate. It isn't an eyesore, but you might take some time to digest the look of a Punto with a backpack. It's hinged over the rear bumper and operates independently of the boot lid. It opens outwards and reminds me of the first generation Mercedes-Benz M-class. It adds an extra step when you want to access the boot and is going to confuse the personnel at the hotel security check posts for sure. The spare wheel cover has the Avventura monogram and the details look good, but the red reflector tape? It looks as shoddy as the reflective tapes on the back of commercial vehicles! 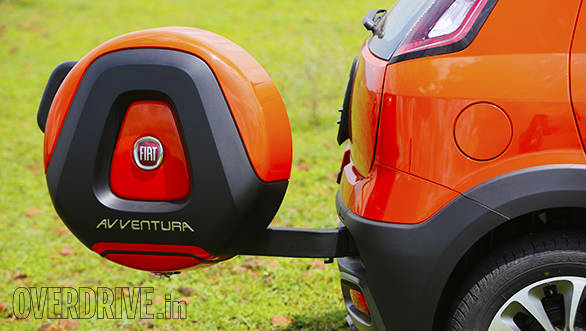 There is a black plastic cladding that underscores the entire car and it also incorporates the front and back skid plates. The chunky design for the front bumper makes the otherwise docile front look aggressive and contemporary. Complementing the adventure-vehicle styling are roof rails, cladding on the doors and the complimentary matte black treatment even for the grille and door handles. The Avventura's design has an air of sophistication to it and unlike the other crossover-themed hatchbacks, this one looks like a purpose-built design rather than a mere plastic surgery on its donor. 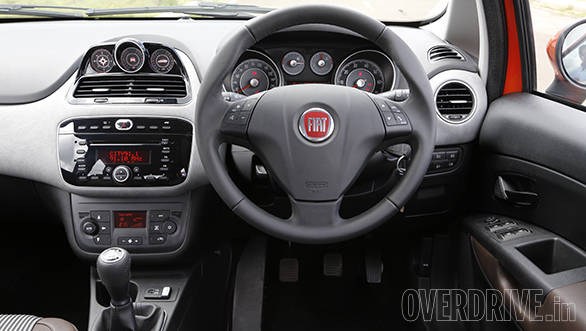 On the inside are the familiar Punto interiors but there is enough in here too to give the Avventura its own stand. The most prominent are the compass and clinometers on the centre console. The cluster sits above the audio system and replaces what otherwise is a small storage compartment in the Punto Evo. The clinometers display the roll and pitch and they work. Interestingly, they do shows the angle of the body roll and there is a fair bit of it. The dashboard and the door trim have leather textured inlays, which add to the feel good factor of the already well-appointed cabin. 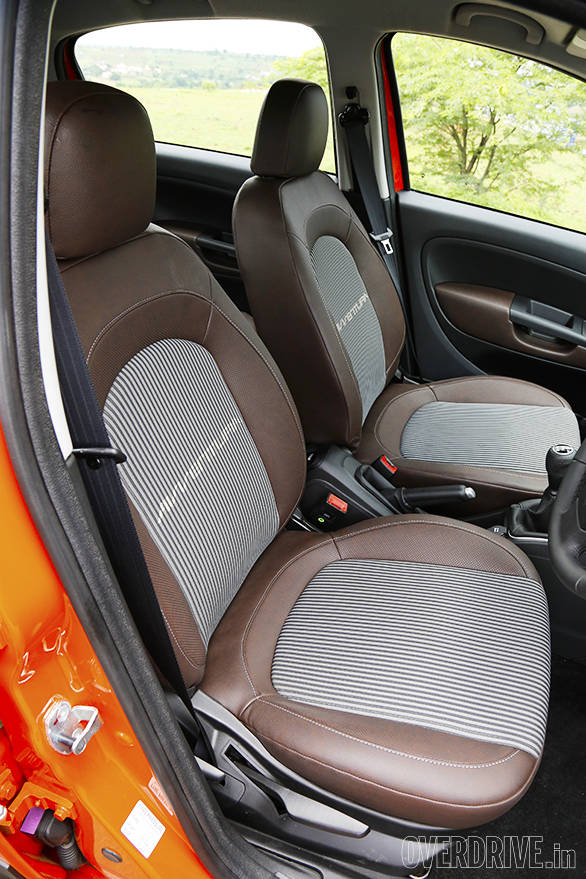 Use of tan instead of the usual all-black or beige and black combinations, is a welcome change

What I also appreciate is the inclusion of new seat upholstery, which is essentially made up of leatherette material, but since the contact areas of the base and the backrest are prone to making you sweat, they are made from fabric. The choice of tan upholstery along with the grey and black plastics is a welcome change from the usual beige and black tones. 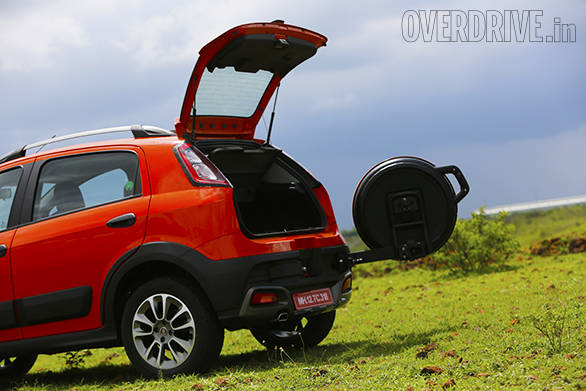 All variants of the Avventura will ship with 16-inch alloys, which means all of them will get the grippier 205-section rubber

Unlike the Cross Polo, the Avventura isn't just a hatchback with a cosmetic makeover. There are changes to the mechanicals too. The most important is the stiffer suspension setup when compared to the Punto Evo. It has not only helped Fiat achieve a class-leading ground clearance of 205mm, but has also made sure that the Avventura maintains its composure through corners despite the higher ride height. The car doesn't have a bouncy ride either. Ride quality and confidence inspiring dynamics have always been the Punto's forte and it doesn't change with the Avventura. All variants of the Avventura will ship with 16-inch alloys, which means all of them will get the grippier 205-section rubber. Fiat also assures us that the entire cosmetic, convenience and mechanical features that are unique to the Avventura, will be standard across the range, which is a very good move. 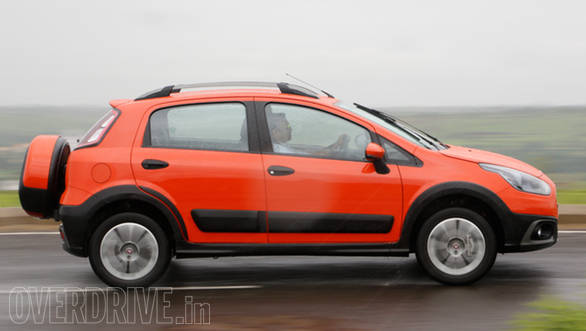 Based on the Punto, it has a regular car-like driving height and not a commanding position like you would have in the EcoSport or the likes

At city speeds the steering feels a tad heavy, but the feedback is great and this is one of the most precise systems in its class. A matter of concern in the urban environments is the spare wheel. Since there are no parking sensors on this car, one would need to get a good judgment of the Avventura's dimensions before attempting to park in tight spots. Based on the Punto, it has a regular car-like driving height and not a commanding position like you would have in the EcoSport or the likes. Nevertheless, the large windshield does impart better visibility. 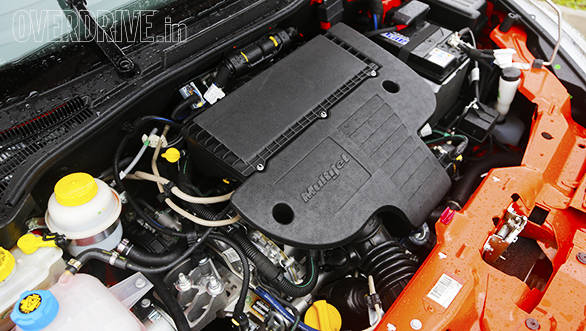 Only 90PS engines for the Avventura

As far as engines are concerned, Fiat is dropping the 1.2-litre petrol FIRE and the 75PS variant of the 1.3-litre Multijet Diesel engine from the Avventura lineup. This being a more premium offering, it will go with the range topping 1.4-litre petrol FIRE and the 90PS Multijet diesel. We drove the latter. As you would expect from a Fiat, the pedals need getting used to, as the travel is awkwardly long. Since the long clutch pedal travel also led to Fiat customers stalling their cars every now and then in traffic or on inclines, the carmaker has improved the low-end torque to prevent this from happening in the Avventura. Though not a very noticeable change, it is welcome. That said, the Avventura, like the Punto Evo, doesn't feel as sprightly as other Multijet-engined cars like the Swift or the Vista. The Avventura feels like a solidly built car and makes its weight evident when you are driving it. 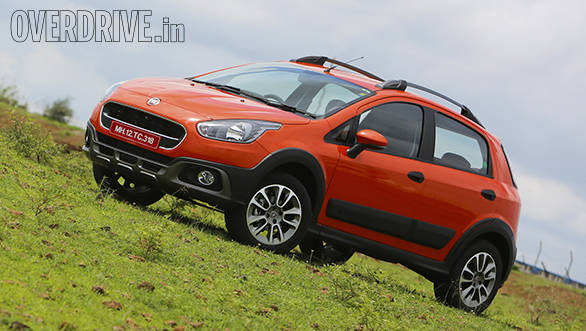 The Avventura will be positioned to compete with the likes of the EcoSport, but as far as the form factor goes, it is in the same league as the Cross Polo and the Etios Cross. However, in terms of the fit and finish, equipment and space it will sit much higher than the crossover hatchbacks. Fiat wants to position it as a lifestyle vehicle and to me they have done a fabulous job, considering how fresh the Avventura is despite being based on a decade old car. 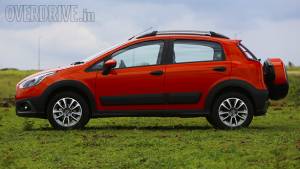 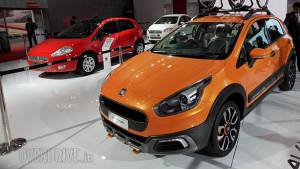 Fiat Avventura to get 90PS engines in India
Advertisement