These are the first pictures of Hyundai 's new small car for India and we have driven it. Called the Grand i10 (referred to as the BA until now), the car will be positioned between the i10 and i20 hatchbacks and will come with both petrol and diesel engines. There will be an automatic version too, mated to the petrol engine. 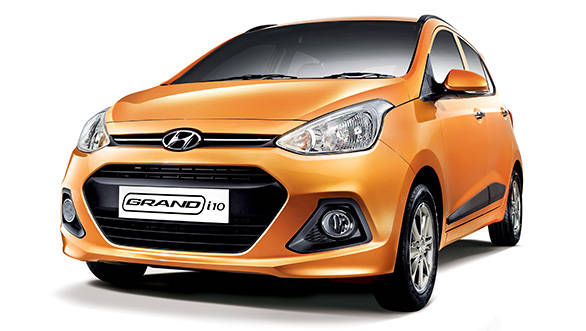 The Grand i10 is nearly the size of the i20, which makes it extremely promising as far as passenger and luggage space go

The Grand i10 isn't an updated or tweaked version of an existing Hyundai model in India, but is an all-new car from the ground up where the Indian market is concerned. As the pictures reveal, it continues to follow Hyundai 's fluidic design language but has stronger design lines and an edgier character compared to both the i10 and i20. The Grand is larger than the i10 and it sits on a longer wheelbase as well, so expect a roomier cabin and a bigger boot which should be among the best in class.

Hyundai has improved the look and feel of plastic inside the cabin giving the Grand i10 a plusher, more upmarket ambience. There's a good level of equipment too. The Grand i10 gets height adjustable driver's seat, electric ORVMs, a stereo with Bluetooth telephony, a multifunctional steering wheel, reversing camera, and for the first time in this segment  rear aircon vents. In addition, the Grand will also sport ABS and airbags on the safety end. 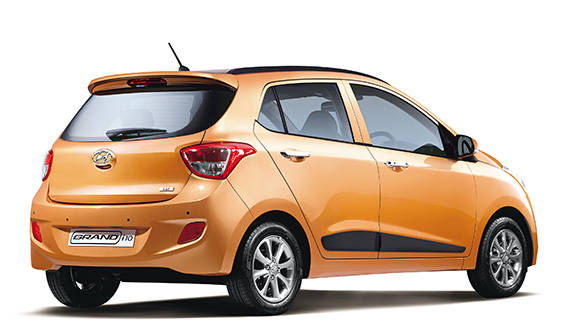 The front and rear of the Grand i10 do have fluidic elements, but when you're making an economic car, getting swoopy with the body panels becomes cost-inefficient

The Grand i10 will be available with two engine options. The petrol will be the tried and tested 1.2-litre Kappa 2 engine which currently powers the i20. The Kappa 2 boasts of class-leading output figures and is one of the better engines in its class when it comes to refinement, performance or fuel economy. Expect it to perform as well if not better on the Grand i10 as well.

The petrol version of the Grand will be available with both a five-speed manual transmission and a four-speed auto. The manual will come in four versions  Magna, Sportz, Asta and Asta (O), while the automatic will only be sold in the Sportz trim. The latter will compete against the recently launched Nissan Micra CVT and the Honda Brio AT, but we expect it to be priced significantly lower.

The second engine will be a diesel. This will also pit the Grand i10 head-on against Maruti's offerings  the Swift and Ritz. The three-cylinder U2 common rail direct injection diesel engine is new for India but has been on sale internationally for a while now. The engine makes 75PS of max power and 152Nm of peak torque. It uses a variable geometry turbocharger which will a first in class in India and is mated to a five-speed gearbox. There will be no automatic version for the diesel-engined Grand i10, however. Our editor, Bertrand D'souza drove the much-awaited diesel version of the Grand i10 in the real world in India. Here are his driving impressions 

"The Hyundai Grand i10 aims at delivering a better driving experience than what we have come to expect from other Hyundai models sold in India. That means the soft, often squidgy driving feel has been replaced with a more confident and assuring character. One area we criticised severely was the over-sensitivity and lack of steering feel experienced in the Eon, i20 and the Verna. The Grand i10 however, is quite surprisingly much better in that area. The steering is light but not too much so, and its quite precise even though there isn't much feedback. It will nevertheless, be appreciated by those looking to drive it in urban areas but is also comfortable and confident at higher speeds on highways.

Another stand-out aspect is its handling. The suspension is soft and you do feel the body roll, but its not intimidating. The Grand i10 suspension response to tight hard corners is well-measured. There wasn't much we could assess in terms of ride quality, but I wouldn't be surprised to find out that it handles potholes and bumps comfortably. Now, I don't expect Elantra levels of plushness, but for a small hatchback it should be reasonably cushy.

The most important aspect however, is its diesel engine. It's the first time Hyundai have offered a diesel this low in the pecking order. Despite this, it does not feel low-cost; this second-generation CRDi is smooth, refined and best of all there is very little engine noise heard inside the cabin. Hyundai haven't released any official specifications for the diesel engine, but I can tell you that power delivery is beautifully linear. You barely sense any turbo lag and the engine picks up cleanly from as low as 1200rpm even in higher gears.

This diesel has a strong low- and mid-range torque delivery but diminishes quickly at the top end. I expect the Grand i10 to show some quick acceleration numbers but not a very high top speed. This is also because of the way its geared, tuned as it is for better fuel efficiency rather than performance. Hyundai claims that fuel efficiency will be best-in-class but haven't revealed ARAI figures yet, which will be announced - along with the specs  -  at the official unveil event in September. The gearing feels tall; in third gear for instance, it goes over an indicated 110kmph on the speedometer. In-gear acceleration is strong and overtaking should not be an issue with the diesel.

The Grand i10 is quite impressive, but wait for a full test for us to reveal more on what we believe is a very strong award contender."

As far as pricing goes, expect significant pricing overlap with both the i10 and i20. Expect the base petrol to start around the Rs 4.5 lakh mark, with the diesel Grand i10 priced at Rs 5.5 lakh. 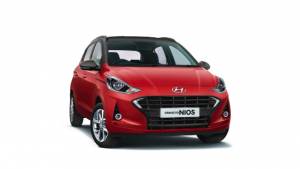 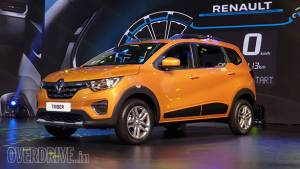 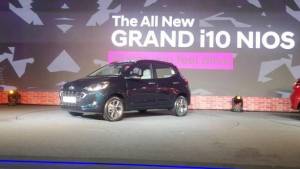