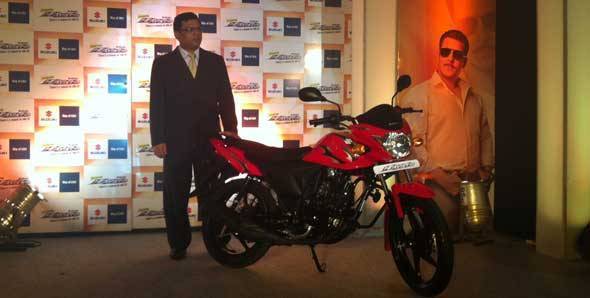 After the Heat couldn't do the business, Suzuki are now aiming to play the 100cc entry level game with a motorcycle that actually displaces what it's peers also do. Say hello to the Suzuki Hayate.

The Hayate name already exists in the Suzuki lineup - it is a step-through in some markets abroad, one that displaces 125cc. Meaning swift wind in Japanese, the Hayate uses a 112.8cc in a styling package that follows the format but is bolder and more different looking than its peers. Some of the styling reminds you of the Slingshot and the fairing has a touch of the GS150R in it as well. The eight litre tank is the identifying feature, showing off the lines that clearly mark it out as a Suzuki. The panels are neatly integrated and the build and finish levels are of a very high order, like on all Indian Suzukis.

The equipment levels are adequate for this segment. The switches are of high quality and miss only a pass-flasher. The instruments are also segment standard  - speedo and fuel gauge but are set into a plastic surround that mimics carbon fibre in finish which is a nice touch.

The engine is all new and makes 8.2PS and 8.8Nm. This is matched to a four-speed gearbox which uses an all-down pattern. This is a clear nod to the Indian entry-level rider but we would have a preferred a normal one-down-three-up gearbox instead. The shifts are a bit notch though they are positive. The clutch lever is light to operate which makes life in crawling traffic easy. When the traffic clears, the Hayate will breeze to 60kmph in 8.87s.  We liked the smooth, refined feel of the engine, though it becomes louder as the revs near the top of its operational range. At this point, you can feel some vibes in the handlebar and the foot pegs.

Suzuki have chosen to use a 130mm drum at the front and a 110mm drum at the rear. The rear specification seems odd given many bikes in the segment offer 130mm drums, but brake testing showed that the specification works well. The Hayate offers sure stops, taking 2.95s to stop from 60kmph, segment par. As usual, we recommend that you do not spend money on motorcycles that do not have front disc brakes - their performance cannot be matched by drum brakes in any form or shape.

The Hayate feels soft. It begins with its seat and the suspension is also tuned for a comfortable ride. It is a small, nimble motorcycle so city handling is effortless. On faster corners though, we found it to be a stable motorcycle, and you can have a spot of fun on the Hayate though that wasn't it's core purpose.

All this and the Hayate will return 64.5kmpl in the city and 73kmpl on the highway. So it is a package that has definite high points. At Rs 40,162 (kick start) and Rs 42,162 (electric start) ex-Pune, the Hayate is also priced well. It is about Rs 2,000 cheaper than the Hero Splendor+ and the Honda Dream Yuga is Rs 8,000-odd more expensive. Which sounds very persuasive. Should you buy one though? That question has been answered in the August 2012 issue of OVERDRIVE.