Yamaha M-SLAZ, based on the Yamaha YZF-R15 debuts, headed for Thailand

Yamaha Japan has sent out the first images of the new M-SLAZ that it intends to sell in the Thai market. The Yamaha M-SLAZ, think of it as the MT-15 if you like, is a naked street bike based on the YZF-R15 platform.

The concept it is based on is. . . wait for it. . . "Just Size Ultimate Fashion Extreme." Which is why when we first saw it, we thought, "Just Yamaha Bring India Bike This Amazing Tomorrow." 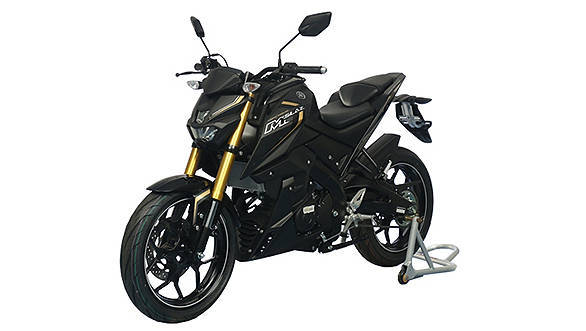 Visually, two things stand out. First is the gold upside down front fork that is perhaps the big chassis change for the platform. In fact, we would go so far as to assume that the YZF-R15 Version 3, rumoured to be in the works, will probably gain these as well.

Second is that sharp and pointy design including the bold tank extensions that strongly remind one of the current KTM Duke tanks. Behind that is a sharp, simple tail section featuring a stepped seat, a hugger and a rear fender that looks ready to be removed.

New wheels and a sharp front fairing wearing an MT-style small LED headlamp round out an aggressive looking package that we cannot wait to sample.

Yamaha plan to introduce the M-SLAZ in Thailand this month and intend to sell 48,000 units in the first year in that market. India plans are currently unknown.

As are the engine specs. But watch out for news on the M-SLAZ/MT-15 closely. It should, our guess, portend the changes that will come to the YZF-R15 version 3 when it debuts, probably next year.

As you know, Yamaha recently brought back the lovely first generation R15 as the R15 S and received an immediate uptick in R15 sales. The R15 v2 was not as well-balanced a motorcycle as the first one in our opinion and the first generation was also a vastly more versatile motorcycle.