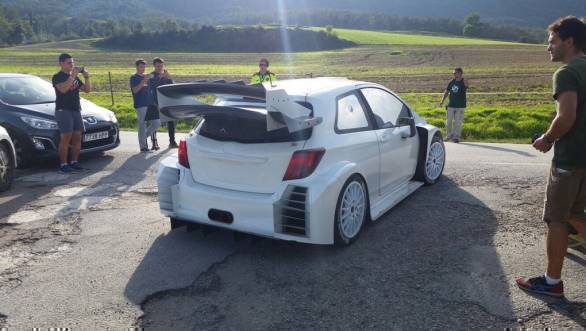 Pictures have appeared on the Internet showing the Yaris WRC prototype in asphalt mode, with aero changes not seen before. Main changes since the car was publicly launched at the Paris Motor Show are at the rear of the bodywork. It is not known whether the enormous rear wing on the car represents the design which the FIA will approve, but it is now only days before the homologation application papers must be filed.

The test was reported to be at La Trona stage, a stage in the Costa Brava region well known to team chief Tommi Makinen from his own world championship driving days, 15 or more years ago.

Toyota's participation in the 2017 season of the World Rally Championship indicates their return to the sport for the first time since the 1999 season. Toyota will thus be the fourth of the manufacturer teams to make it to the championship in 2017, in addition to Volkswagen, Hyundai and Citroen.