Thierry Neuville, the fastest driver on the 2018 Rally Italia Sardegna, extended his WRC championship lead over Sebastien Ogier, beating him by the slender margin of 0.7 second on a rally where fortunes swung wildly in ever-changing weather conditions. The rock strewn stage roads damaged many cars with Ott Tanak and Jari-Matti Latvala both penalised for not completing the route yet they achieved top ten results. Three different marques finished on the podium, Hyundai scoring their tenth WRC victory won over half the stages but Citroen disappointingly won none. It was a happy occasion for the 29 year old Belgian driver, winning his ninth WRC victory (his third this year) just six days before he celebrates his 30th birthday. Skoda driver Jan Kopecky won WRC2 for the third time this year heading seven Fabias who finished in the top nine R5 cars. It was a costly defeat for Ogier, a bizarre tactical mistake at a time control leading to a fine of 10,000 euros, but this time no loss of championship points. 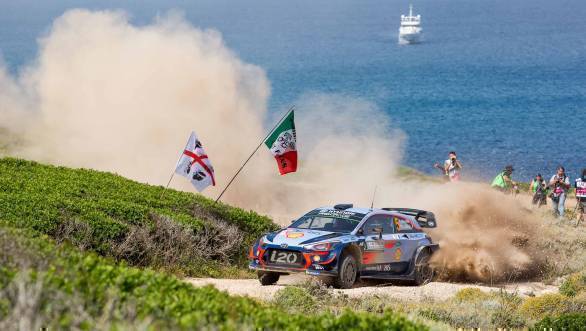 With the disappointments in recent months after his win in Corsica, the lost points in Mexico, the endless frustrations in Argentina and then going off the road in Portugal, the world champion Sebastien Ogier went to Sardinia hoping for a change in fortune. The opportunities presented by the remarkably unexpected wet conditions on the Friday suggested he was heading in the right direction. He had a plan to use the first loop on the Friday as a high speed recce, confident that with his race-tested notes he could attack in the afternoon. It was a sensational idea. The treacherous weather conditions, helped by misfortunes for those beating him, meant he jumped on the first afternoon stage from fifth place into the lead. He went into the Saturday stages with a quarter minute lead, planning to control the rally from there on but it didn't happen like that. It all went wrong. Neuville was really motivated and started progressively taking little bits of time from then on till he snatched the victory on the last stage. At the time Ogier simply suggested a poor time which halved his lead on stage 12 was "wrong rhythm, probably". Later he confessed, "I don't know what I was doing on that stage". His slow run through the Monte Lerno stage eventually lost him the rally. With disasters befalling the rest of the M-Sport team (Elfyn Evans had a very unhappy run and went off the road, damaging his steering, then after a promising start Teemu Suninen slid off the road), Ogier was M-Sport's only hope of a good result. One bad stage made all the difference to the result. 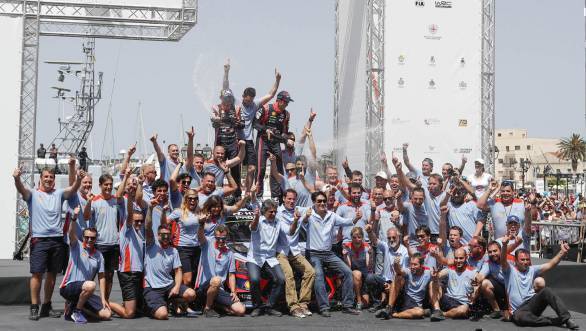 For this event Hyundai's third driver was Hayden Paddon instead of Dani Sordo but the early star of the team was Andreas Mikkelsen who led the rally all through Friday morning. When conditions worsened he overshot a corner and had to reverse to get going again, gifting the lead to Ogier. Then on the next stage Mikkelsen spun and damaged the gearbox which jammed in reverse. Paddon was now in a serious supporting role and moved up from eighth on Friday morning to fourth on Saturday evening. Mikkelsen finished the rally but out of the points for himself and for the team.

At Toyota the star was Ott Tanak who had been third on Friday afternoon but then on the final stage of the day he jumped badly, damaging the car on landing and stopped in the stage. Jari-Matti Latvala then took over behind Ogier and Neuville, with close company of fourth placed Esapekka Lappi. Then the alternator failed on Latvala's car the road section from the final stage on Saturday back to the service park. In the end Lappi was the only Toyota to finish in the top six. All three Toyota drivers however scored a stage fastest time. Citroen had an unconvincing event with no stage wins though Mads Osberg scored a couple of second best times on occasions when he felt comfortable with the car. 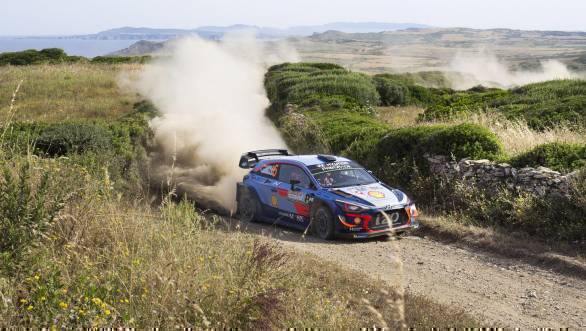 Unsettled by the sudden exit from the team of Kris Meeke and urgently having to reassess their strategies for the rest of the season (remembering Sebastien Loeb is only available one more time this year), the team only entered Ostberg and Craig Breen. They finished fifth and sixth overall  and came home with undamaged cars. Their's were the only team whose drivers did not avail themselves on Rally2!

Now comes a six week break in the WRC calendar, a welcome change after the pressures of three WRC events held closely to each other. Traditionally this is the end of the season of rough WRC events and, assuming the new event in Turkey produces no surprises, the conditions will be smoother from here on to the end of the season. Hyundai's lead in the Makes' series had increased to 28 points in front of M-Sport while Neuville in the Drivers' series was ahead of Ogier by 27.

In WRC2 the game of musical chairs at Skoda continues. The choices of which championship contending drivers to enter being decided as late as possible every time, is aimed at providing the highest possible chances of the WRC2 Drivers' title under the rules. These rules count the best seven results with one score to discount. Kopecky has now scored his third victory out of three starts, his teammate Pontus Tidemand has started four events, winning three and coming second on the other. 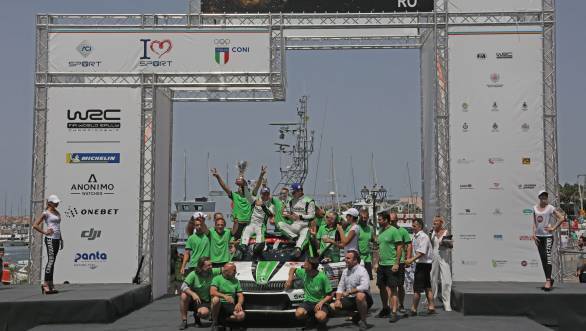 Jan Kopecky and the Skoda team celebrate their win in WRC2

On this event the early leader was the Citroen of Stephane Lefebvre before he damaged the suspension on Saturday morning while the initial leader had been Ole Christian Veiby who had suspension troubles. Once repaired Veiby then set about catching up, making an impressive run of ten fastest times and on the Sunday morning passed the 20 year old Frenchman Nicolas Ciamin into second place. The Japanese drivers Hiroki Arai and Takamoto Katsuta had a bad rally, their Fiestas retiring respectively with accident damage and with transmission failure while Simone Tempestini retired his Citroen and Loubet his Hyundai. These gaps left Skoda with an impressive space in the results to fill! Tidemand maintained his lead in the category, now by 18 points. A welcome newcomer to WRC2 was the triple European champion Kajetan Kajetanowicz, who missed stages on Day 1 with a broken steering arm, as was the double Asia-Pacific champion Gaurav Gill, who missed stages after a heavy landing.

Jean-Baptiste Franceschi won WRC3 ahead of the Peugeots of Taisko Lario and the English lady Louise Cook, and took the lead in the championship with two rounds still in hand over Radstrom.