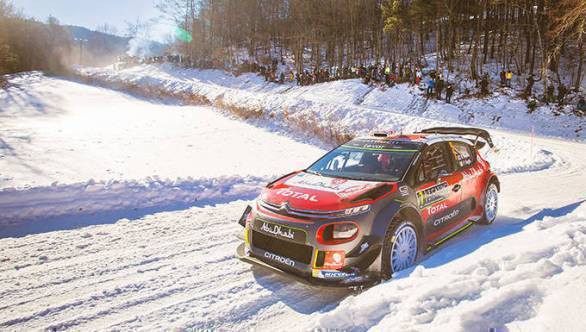 Citroen
Citroen again have two 2017 cars, this time with Craig Breen alongside Kris Meeke and a non championship 2016 specification car for Stephane Lefebvre. Monte Carlo had been a difficult event because the conditions were different of what were experienced during the test (full snow or no snow, but not a mix like during the rally). Meeke's stage 10 engine trouble is confirmed as ignition problem but details are secret. There were good winter conditions with ice and snow for their first Sweden test session, at the beginning of January, and hopefully their second test just before the rally will see conditions close to those of the actual event. Two new 2017 World Rally Cars for the event, chassis 4 and 6.

Hyundai
Hyundai have again entered the same crews (Hayden Paddon, Thierry Neuville and Dani Sordo) in chassis 3, 2 and 1, the same as at Monte Carlo. The team were happy with Neuville's performance until Saturday afternoon when a very small mistake cost him the lead. The changing conditions made it difficult to assess the performance level of the car for other events but it proved the cars were easy to drive, and overall in terms of reliability there was only a small issue with power steering which was easy to fix. All the 2017 cars seem to be quite close in terms of performance, the most pressing development must be work on the differential, the power distribution from the engine to the wheels. The team did no Monte Carlo test in December because the conditions were not ideal so that was postponed to this year before the event. For Sweden testing the team had two perfect days with Neuville around Ostersund but then the conditions suddenly changed and the team had to stop the test as the snow turned to the rain and warmer weather. The Sweden test resumed the week before the Swedish for Sordo and Paddon.

M-Sport
Monte Carlo ended with the first team WRC win since 2012, and almost a 1-2 result, a happy replay of 2011 when Fiesta WRCs dominated the first WRC event run under the 1.6 litre rules. The final day delay for Ott Tanak was confirmed as coil failure while the team have been reticent to explain his problems with self-changing gearshift on stage 11 beyond confirming that there was an issue which was easily resolved and running as normal for the next stage. It was unrelated to the issue on Sunday. For Sweden the team had two test sessions at Kall near Ostersund in December and the week before the Swedish Rally. M-Sport brought the same three 2017 cars for Sebastien Ogier, Ott Tanak and Elfyn Evans as in Monte Carlo while the One Bet Jipocar team have a new chassis (number 5) for Mads Ostberg. M-Sport also have three R5 first evolution R5 entries for Teemu Suninen and Eric Camilli (the same cars as at Monte Carlo) and also a DriveDMack Fiesta trophy prizedrive entry for Gus Greensmith being the chassis 200 shown at the Autosport Show.

Toyota
The team gained no unexpected lessons from Monte Carlo apart from surprise at the interest from spectators especially in the service park. Two new cars for this event, chassis 3 for Jari-Matti Latvala and chassis 4 for Juho Hanninen. Special problem for Toyota Gazoo Racing concerned accommodation around Torsby because the team became considerably bigger than when the bookings were originally made six months earlier. All the WRC teams had accommodation problems, with most teams only placing key members at Torsby and many stayed at Sunne. Only pre event problem has been that the weather for the tests had been quite warm between Christmas and in late January. The week before the rally the top team personnel had to be in Japan for the Toyota Gazoo Racing press conference. This year represented ninth anniversary of Latvala's first world rally championship win, the youngest ever WRC winner.