Three days after Kris Meeke openly criticised his Citroen Racing team on radio, he won the mixed surfaced Catalunya Rally in spectacular style! Following an unconvincing start on gravel stages, the Ulsterman immediately held the lead for the two remaining days on asphalt stages. On a most disappointing event for both Hyundai and Toyota, Meeke's C3 WRC won easily from the battling M-Sport team cars of Sebastien Ogier and Ott Tanak, seriously strengthening M-Sport's Manufacturers' championship prospects with their drivers lying 1-2 in the Drivers' series. Spanish driver Nil Solans clinched both the WRC3 and the Junior World Championship titles on the final JWRC round. All three Hyundai i20 Coupe cars suffered front suspension failures after similar impacts, Toyota's Jari-Matti Latvala suffered technical problems for the fourth successive time and there was an impressive drive by his teammate Juho Hanninen while the privateer 2017 Fiesta WRC of Mads Ostberg led the rally outright on Day 1. The withdrawal of China Rally from the WRC this year created a significant six week gap in the season, increasing even further anticipation for Catalunya Rally. The top excitement had to be the return of Andreas Mikkelsen, a journeyman exile after the sudden end of the Volkswagen WRC programme. His employment served as a serious statement of intent by Hyundai, who already had a strong team of drivers, who were forced into an event rotation system. For this event Paddon was rested. Andreas did not disappoint on the gravel stages, winning stage 3 and momentarily taking the lead, but like both his new teammates he found the asphalt stages were more challenging. Dani Sordo had been lying second on Day 2 when both he and Mikkelsen hit the same hidden roadside curb. From then on Hyundai's hopes rested on Thierry Neuville who earlier had been delayed by hydraulic troubles but was fighting back when three stages before the finish he impacted a similar obstacle and had to retire. 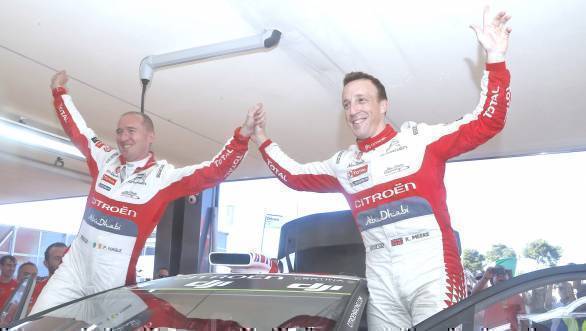 Meeke and Nagle celebrate their win at Catalunya

Citroen this time again fielded their patron Khalid Al Qassimi, also running Kris Meeke and Stephane Lefebvre, resting Breen. Meeke had explained before the event that Citroen's strength was on asphalt not gravel, so he did well by ending the gravel day in third place, ready for a clear run on the two asphalt days to come. Lefebvre however had an unsettled and technically problematic time on an event he hardly knew yet finished an excellent sixth. About Toyota, Jari-Matti Latvala made a spasmodic effort but had to retire after making one scratch time on Day 1. An impact under the car damaged the lubrication system. This gave Juho Hanninen, an event he also little knew, to impress. He scored two scratch times on Day 2, improving till he was in fourth place behind Meeke and the two top Fiestas. Esapekka Lappi, another Spanish relative newcomer, had also impressively worked his way up to sixth at the end of Day 2 before sliding into the barriers and ending his rally. 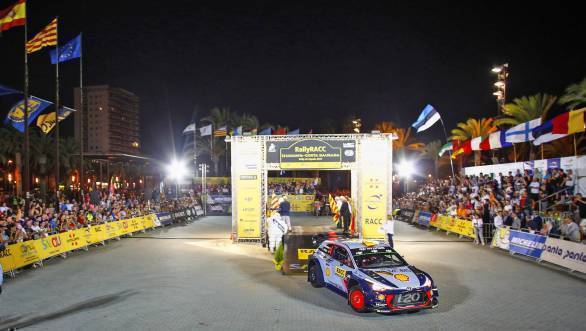 With Meeke being alone and unchallenged in the lead, the rally had focussed on those behind. By midway we witnessed a championship positioning struggle between Hyundai and M-Sport. Until their suspensions started to fail Hyundai was pushing hard, but suddenly the whole pattern changed. M-Sport's third driver Elfyn Evans found the conditions too warm to get the best of his DMack tyres, falling well back. He finished in an unhappy but steady seventh place, never scoring a stage time better than eighth. Team principal Malcolm Wilson found himself anxiously balancing the value of freedom for his drivers with the need to ensure both Ogier and Tanak preserved their second and third positions, knowing that Hanninen's Toyota was now safely far behind. He boldy declared there would be no team orders. His only worry was not to upset Ogier whose continued team membership he wanted next year. Ogier meanwhile was driving a very measured event, just fast enough to keep in front of Tanak, who was hampered by the specification of his gearbox, but slowly enough to keep his tyres in best possible condition for the final Power Stage. Ogier went home with everything he wanted, except for victory, still undecided about his future. 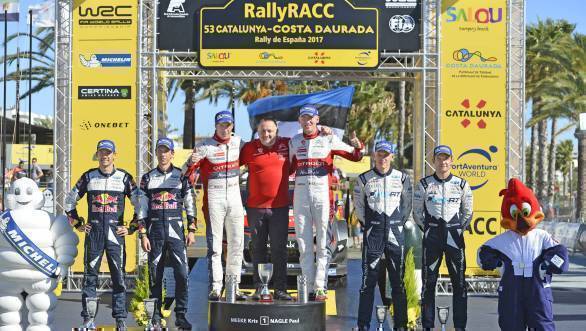 The podium at the 2017 WRC Catalunya Rally

After a season in which he suffered from a lot of muddled planning, Mads Ostberg finally produced the sort of performance which the purchase of a 2017 World Rally Car should have delivered. In the confusion of the stages of Friday he snatched the overall lead but come the later asphalt stages he slipped back. He had never rallied this car on asphalt before, and after the first asphalt stage was delayed he started on cold tyres and immediately went off the road! Despite various difficulties he persisted and finished fifth.

The WRC2 title had been won in Germany and it was notable in Spain that top R5 drivers including Eric Camilli, Ola Christian Veiby and Pierre Louis Loubet entered in a non- championship capacity. The works run car of Eric Camilli was the leading R5 car until falling back with differential trouble on the final day. The fellow works run Fiesta R5 car of Teemu Sunuinen however led WRC2 from start to finish, finishing a half minute ahead of Skoda team driver Jan Kopecky. Kopecky suffered unfairly when baulked by dust behind the slow moving World Rally Car of WRC Trophy driver Jourdan Serderidis, a handicap the Stewards did not respect The Japanese trainee drivers Hiroki Arai (crashed) and Takamoto Katsuta had trouble and the new French champion Yoann Bonato had gearbox trouble. It was however a good chance for Juuso Nordgren to learn about asphalt rallying and he drove well to finish fourth behind Benito Guerra.

Six cars were entered in WRC3, five of which were also eligible for the Junior WRC, for which this was the final round in the series. In both series Spanish driver Nil Solans clinched the titles early in the second day, his nearest WRCJ rival having failed to win sufficient category stage wins to earn the supplemental championship points to beat him. The three top placed drivers in the WRC Trophy series entered. For the Mini JCW driver Valeriy Gorban this event was his final chance to increase his score, while both his challengers Jean-Michel Raoux and his fellow Citroen DS3 WRC driver Jourdan Serderidis could gainfully enter all the remaining events. Gorban went home with four straight wins but his two rivals still stayed eligible to take the title later in the season.