Starting first car on the road, Sebastien Ogier cruised through to win the all-asphalt Rallye Deutschland but his Volkswagen team did not repeat their 1-2-3 walkover of last year. Teammate Jari-Matti Latvala's VW was out of contention on stage one when the car's gearbox failed, though Andreas Mikkelsen led for seven stages before falling back with errors before losing his brakes in the final stage, finishing fourth. Hyundai drivers Dani Sordo and Thierry Neuville meanwhile were furiously battling Mikkelsen for second place up to the final stage, the place finally going the way of Sordo by 0.1 seconds. M-Sport had a miserable event with Mads Ostberg struggling to sixth place with technical problems and Eric Camilli off the road also on the opening stage, but happy to hear that their absent R5 team driver Elfyn Evans clinched the British championship elsewhere during the rally. Citroen released one of their cars for protege driver Stephane Lefebvre to use but he crashed heavily on Day 2 when sixth, hospitalising both crew members. DMack M-Sport driver Ott Tanak was sidelined with alternator failure when holding fifth place at half way, his latest version asphalt tyres not so impressive here as the DMack gravel tyres had been on previous events. Support championship categories saw runaway wins for Esapekka Lappi (WRC2), Simone Tempestini (WRC3/Junior) and Osian Pryce (Drive DMack Fiesta Trophy). 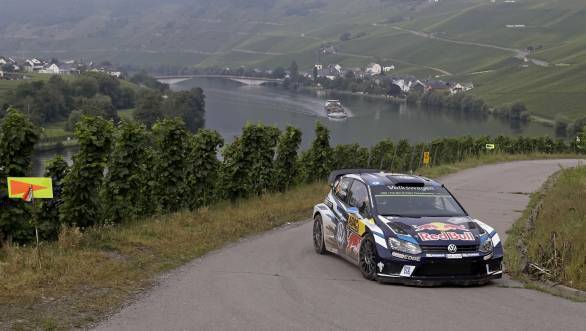 When the teams arrived in Germany, the big news was that this was VW's Sporting Director, Jost Capito's final rally before moving over to McLaren F1. VW were supporting the event, celebrating 50 years in rally sport, not the least by presently a selection of famous old rally cars, mostly Golfs of one sort or another. Latvala's early gearbox problem evidenced again that Germany does not automatically do any favours for VW, and Ogier had an early struggle with his fellow VW driver Mikkelsen who held the lead for over a full day before he fell back. From then on tyre choices played a major part as the traditionally mercurial weather patterns kicked in on Day 2, which meant mud thrown on the road by Ogier's car running ahead hindered Mikkelsen's progress. Behind them phalanx of Hyundais mounted a charge led by Thierry Neuville and Dani Sordo and started to harry Mikkelsen, until at the end of Day 2 just four seconds separated Mikkelsen, Sordo and Neuville. The greatest excitement was still to come. With two stages left, Ogier was 20 seconds ahead, but 3.1 seconds separated the battling trio. Then the penultimate stage was cancelled on account of spectator control problems, so it was all down to the Power Stage. Mikkelsen had brake problems arriving at the finish with flames coming from under the car. Neuville scored the best time but Sordo did just enough to finish second overall by a margin of 0.1 second! Third Hyundai driver Hayden Paddon finished fifth, finding the going difficult. "On nearly every stage I had a moment", the New Zealander confessed "I have a lot to learn about tarmac rallying!" And not only about rallying but tyre selections as well.

Sadly M-Sport were not at the party at all. Even after he rejoined the rally Eric Camilli was not on the pace so there were hopes that Tanak would present a challenge. Tanak's new version DMack tyres however were not as competitive as their new version gravel tyres had been in Poland and Finland, and then he stopped on Day 2 with alternator trouble. Once again, M-Sport's hopes rested on Ostberg. He had an horrendous time, suffering differential troubles which led to eternal wheel spinning on corners due to front axle trouble and there were constant brake cooling issues. Through all this he battled on to finish sixth, the last of the World Rally Cars which completed the full route.

Volkswagen's championship 59 point lead over Hyundai in the Manufacturers' series was shaved to 55 while M-Sport's third place over Volkswagen's secondary team was down to one point. In the Drivers' series Ogier extended his lead still over Andreas Mikkelsen to 59 with Hyundai drivers Hayden Paddon and Thierry Neuville equal third. 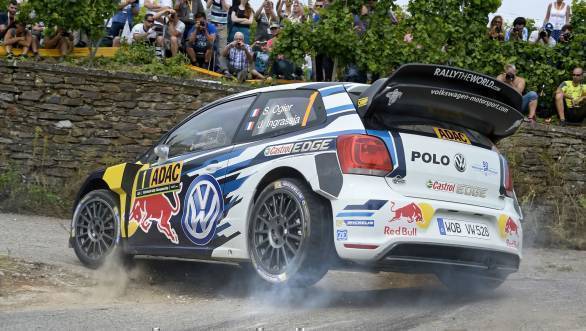 There was a spate of early retirements in the WRC2 category, mostly the results of going off the road. Day 2 original leader Armin Kremer's private Skoda headed off the works cars of Jan Kopecky and Esapekka Lappi, with the Peugeot 208 T16 of Jose Suarez challenging in the early stages before a spin and a puncture. Kremer lost a half minute and with it went his lead which he was never able to retrieve. Kopecky also punctured and spent the rest of the rally trying to pull back. At the end of Day 2 he passed Kremer and got up to second, so works Skodas were now first and second in WRC2. Hidden from view were the efforts of a third works driver, Pontus Tidemand, who was this time competing on a non-points-scoring basis and therefore seeded far behind the others. Secretly he was bidding for a top ten position, eventually finishing the rally in eighth place overall, between his regular teammates Lappi and Kopecky. Lappi scored his second WRC2 win of the season. In the WRC2 championship standings, the absent Elfyn Evans and non points scoring Teemu Suninen (delayed on this event by suspension damage) continued to hold 1-2 in the WRC2 series while Lappi and Kremer improved to take third and fifth places respectively.

Simone Tempestini led the WRC3 and the Junior categories almost from the start ahead of early leader Martin Koci, who finished second. A remarkable performance was put in by the two Italian team Peugeot R2 drivers, eligible for the WRC3 series, who had been for a long time lying third and fourth against much more powerful cars, before Terry Folb's Citroen R3T pipped Fabio Andolfi's R2 car to third place right at the end, and before Damiano De Tommaso had steering failure on his, which threw him off the road, happily without damage, allowing him to continue. In the WRC3 championship standings season leader but absent Michel Fabre was finally overtaken by Tempestini who now led this alongside the Junior series. In the Junior series the title was now down to between four drivers: Tempestini, Veiby, Folb and Dubert.

In the DriveDMack Fiesta Trophy Osian Pryce led all the way, finishing ahead of Max Vatanen and held 1-2 in the series' standings as well.