VW driver Sebastien Ogier scored a hat-trick World Championship win at Rallye Monte-Carlo, the opening round of the 2016 world championship, and his fourth win at this prestigious event. After fighting off a determined challenge from the privately run Citroen DS3 WRC of Kris Meeke, Ogier was comfortably at ease, but then scored the PowerStage win on the final stage, giving the Frenchman a maximum points score, and VW a 1-2 result. 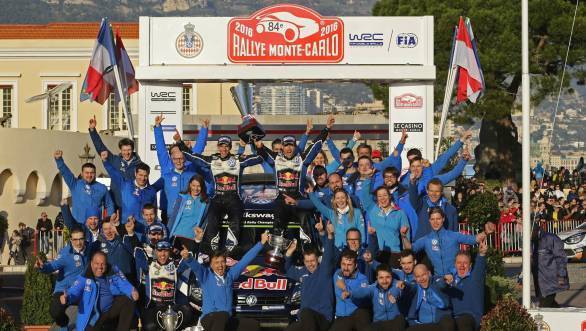 Meeke was in splendid form until he retired with four stages to go, when his car lost the sump-guard and the gearbox was damaged. After a slow start Hyundai's new cars finished an encouraging third and sixth, headed by Thierry Neuville who regained the confidence he lost last year. Very impressive was the pace of M-Sports upgraded Fiesta R5. The WRC2 category was led almost all the way by Elfyn Evans, finishing two minutes ahead of the top R5 Skoda, that of the unregistered Esapekka Lappi. The small Peugeot 208 R2 cars were remarkable in the WRC3 category, winning half of the stages with Peugeot Academy driver Jordan Berfa finishing second behind Citroen R3 driver Ole Christian Veiby. An unusual number of World Rally Cars failed to finish. In addition to Meeke, Latvala's VW had the suspension break after an off-road excursion, while also off the road were Lorenzo Bertelli, Eric Camilli, Robert Kubica and Bryan Bouffier! 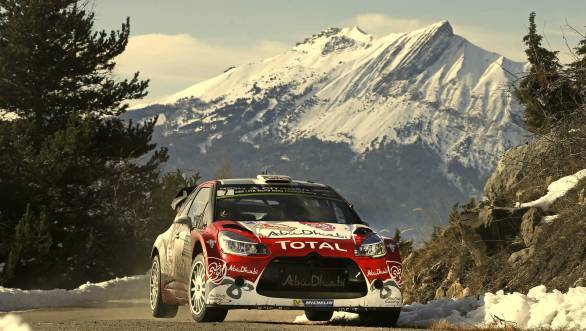 Kris Meeke proved to be something of a surprise in his privately entered Citroen, matching Ogier's pace in the initial stages of the rally

Few seasons have begun with such a spirit of excitement and curiosity, after the long period of uncertainty, with driver and co-driver changes and perhaps most vitally the exciting new colour schemes selected by the top four manufacturers in the business. And a brand new design of car! It seemed a foregone conclusion that Volkswagen, with important upgrades in the specification of their Polo R WRC, would continue to be the fastest cars, but the big surprise was when Kris Meeke matched the pace of Sebastien Ogier in the early stages, in the Citroen. Without the ever present pressure that Meeke has suffered for the past two years or so, he was a happy free spirit and his driving showed this. The 2016 Monte had the makings of a great success. The reasons for Meeke's problems were difficult to define but the consequence was one more disappointment in the 38 year old's career. Supporting Meeke was Stephane Lefebvre who progressively impressed on only his fifth WRC appearance in a WRC car, finishing fifth. Andreas Mikkelsen meanwhile blocked the opposition, which Latvala should also have been doing, but he slid off the road and damaged his suspension.

When Latvala disappeared on Saturday the challenge now came from Hyundai. Paddon at the wheel of a 2015 car went off the road on the third stage, incurring considerable Rally2 penalties, leaving the new 2016 cars of Thierry Neuville and Dani Sordo to defend Hyundai honour. The team had a lot of trouble mainly with the car not handling to the drivers satisfaction, but gradually there was happiness and better stage times with Neuville eventually gaining a podium result, but it was a near thing. On the final stage of the rally, both Neuville and Paddon had transmission failures but they slowly reached the finish, not least after scoring an impressive 1-2-3 stage result on the Saturday afternoon. 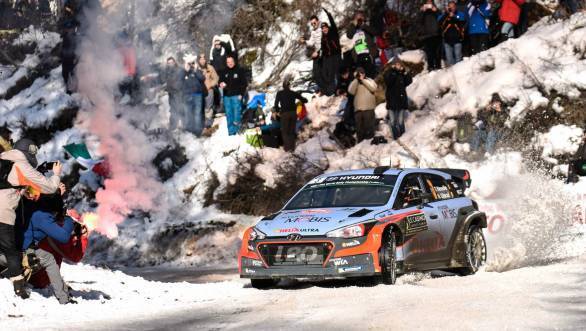 Thierry Neuville did well to score his first podium of the season, an indicator of the Hyundai driver's new found confidence

The fourth team was M-Sport where all four crew members were new. The highly rated new driver Eric Camilli slid off the road very early on, the car being too badly damaged to carry on. This left Mads Ostberg cautiously bring his car to the finish in fourth place, conscious of the challenge of not only a new codriver but also listening to pacenotes in Norwegian instead of Swedish for the first time. M-Sport had another encouraging result when Ott Tanak brought his DMack team car into seventh place. Other privateer Fiestas however had an unlucky time. Of the 15 world rally cars at the start, only nine were eventually classified as finishers. By the Sunday evening, while Ogier was a clear leader in the Drivers' championship, Volkswagen and Hyundai were joint leaders in the Manufacturers. Ogier was gracious, conceding that the challenge from Kris Meeke was something he had not really anticipated but when that challenge had gone, it was time to thank everyone that gave him this 33rd victory in the world championship, run on many roads which were close to his old childhood home in the Haute Alpes province. "This rally is the most important (rally) of the season for me. It is so emotional to win in Monte Carlo. I repeat the story all the time but I mean its so great, fourth time victory on such a difficult rally. I am very happy. I want to thank all my team because it is more than ever a team effort this weekend. And my gravel crew have done fantastic job, that was really great job from them. The car was perfect once again so I am also very happy for another victory for Volkswagen too". 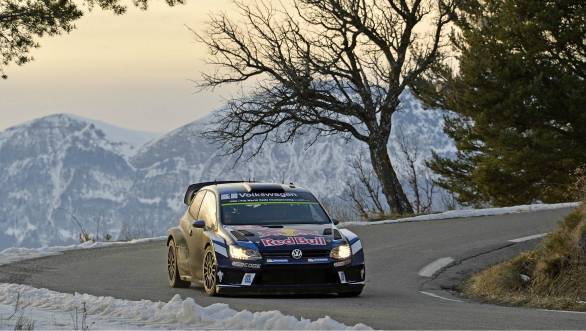 Perhaps the happiest faces in the rally came from the MSport engineers when Elfyn Evans trounced the R5 opposition, leading all the way after catching up after a first stage puncture. Victory in the WRC2 category for Evans in the Fiesta was very significant, coming at a worrying time commercially when many long time Fiesta customers had decided to turn their allegiance particular to Skoda and also to Citroen and Peugeot cars. Many R5 cars were entered outside the WRC2 championship, either waiting for the chance to score points on events where the entry was likely to be less competitive or simply for the pleasure of competing at Monte Carlo. Second best R5 was the non championship Skoda of Esapekka Lappi, who finished 2.9 seconds ahead of the registered Skoda R5 of Armin Kremer. Sixth championship competitor was Yoann Bonato's Citroen, he lost ten minutes off the road on the Saturday evening, dropping back from third WRC2 competitor. Ricardo Trivino went off the road on Friday morning, incurring penalties, while only two championship registered drivers failed to finish. Julien Maurin's Skoda with engine failure and Jean-Michel Raoux who went off the road and damaged his Citroen engine. Peugeot Rally Academy driver Jose Suarez struggled in seventh championship position while another non championship competitor Teemu Suninen finished fifth, splitting the two Citroen drivers Quentins Gilbert and Giordano. The non championship drivers were headed for sometime by popular veteran and World R-GT Champion Francois Delecour this time in a Peugeot 207 S2000, but he fell back with power steering trouble.

Norwegian driver Ole Christian Veiby led WRC3 for 14 of the 16 stages and pulled comfortably ahead with a lead that exceeded three minutes. Although there had been indications that the WRC3 series was no longer a sinecure for the turbocharged Citroen DS3 R3 cars last year, the biggest surprise was that there were more entries in WRC3 from R2 cars than R3 cars. These were, headed by the ACI Team Italia Peugeots of Fabio Andolfi (who finished third) and Damiano de Tommaso (fourth), and also the Peugeot Rally Academy 208 R2 car of Jordan Berfa (second). Remarkably all nine registered entries completed all the stages and never needed the help of Rally2 rules.