Heartbreak came to Poland when the stifling hot summer weather conditions changed dramatically on the final day of Rajd Polski and a puncture on the penultimate stage deprived Ott Tanak and the DMack tyre suppliers of a maiden WRC victory. It was the Fiesta driver Tanak's second successive disappointment on this event. Andreas Mikkelsen gained a last minute victory for Volkswagen, which made him the sixth successive different WRC winner in six events, on the weekend which marked his tenth anniversary in the sport. WRC's running order rules cost world champion, and fellow VW driver, Sebastien Ogier dearly, the championship leader gaining his worst result for nine months. Competitors were faced with atrocious stage conditions on the final day and Tanak, with countless other drivers, had their rally hearts broken. In the WRC2 category there was a similar story when the leader, Skoda driver Esapekka Lappi, dropped to third on the penultimate stage, while in the Drive DMack Fiesta series the leader Osian Pryce dropped behind Jon Armstrong three stages from the end  always because of punctures. 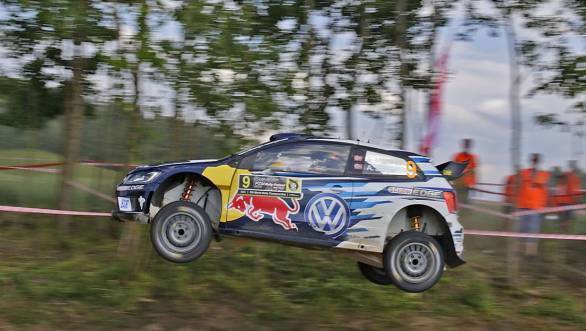 No fewer than seven drivers scored stage scratch times on the first two days over the fast, sandy gravel tracks in northern Poland and competition was close. Battle was immediately drawn between Mikkelsen, Hyundai driver Hayden Paddon and Tanak. After pushing hard during the morning Mikkelsen's his lead on Friday midday was 2.6 seconds, but as the stage conditions deteriorated on the second pass both Mikkelsen and Paddon had handling difficulties. Disadvantaged first runner Ogier meanwhile kept in touch impressively well and by Friday evening was only 16.3 seconds behind the leader Tanak. Ogier's hopes dwindled on the Saturday, however, when his disadvantage became very significant and after only three stages was lying sixth overall. While Tanak was predictably enjoying the fruits of his eighth running position, third runner Mikkelsen was gradually slipping back but Ogier was now almost a minute behind the leader. Fourth running Mads Ostberg (Fiesta) was just in the top ten, and second running Dani Sordo (Hyundai) was not even in the top ten. By the Saturday evening Thierry Neuville's Hyundai was fourth and Jari-Matti Latvala's VW fifth. Then the rains arrived! 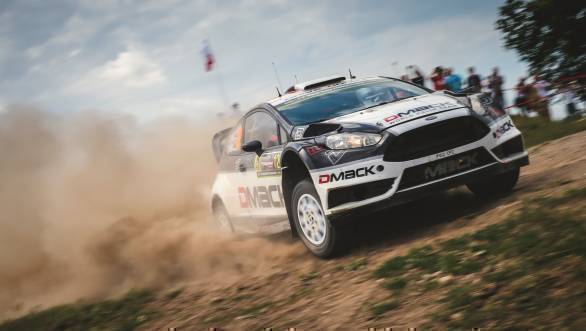 There were only four stages on the Sunday but everything was now very different. Tanak started the last morning 21.3 seconds ahead of Mikkelsen. A cool head should bring victory but deep mud and dislodged rocks on the penultimate stage brought punctures galore. Survival was the name of the game, it was here cruelly Tanak had the puncture which cost him the win. Mikkelsen won the rally by 26 seconds. It had been a long time since the M-Sport cars had been considered challengers for an overall victory, but on DMack's latest generation gravel tyres Tanak was suddenly in the frame. The official M-Sport team cars were not so impressive, though Eric Camilli was impressively leading teammate Ostberg before he had an extraordinary incident on the final morning. He spun off the road at the end of a stage, through inadvertently selecting engine road mode. This dropped him behind Mads who finished eighth. 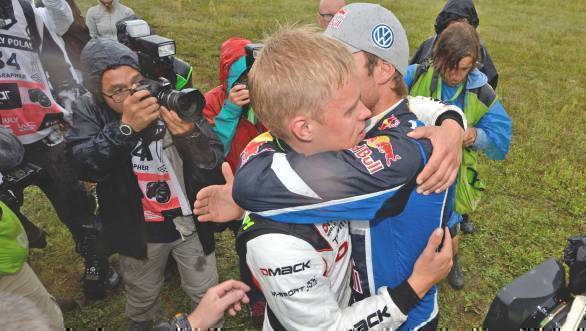 Hyundai had a mixed story. Neuville led the rally overall on the opening superspecial but was troubled by poor pacenotes on Day 1, and both he and Paddon had set-up problems. As the rally progressed with none of the top runners suffering delays, Sordo was unable to challenge at all and at the finish their top driver was Paddon who finished third, exactly 0.8 second in front of Neuville, but almost half minute behind Mikkelsen! Sordo retired on the final day with suspension damage. Volkswagen could only stand by and watch Ogier struggling but Latvala was running inconsistently so everything rested on Mikkelsen, who did not disappoint. What never really became evident was the superb efforts once again by Ogier, who hoped for a show of splendour on the final day but his only happy moment was a traditional win in the Power Stage. One of the delights of the rally was the battle between the two Citroen cadet drivers Sebastien Lefebvre and Craig Breen, each sensing their prospects with the team could be judged by their performance here. They both put up an incredible fight for a long time, leading both M-Sport official team cars, but Lefebvre touched a tree two stages from the end and suspension damage dropped him to ninth. Breen finished a happy seventh.

Volkswagen lead in the Manufacturers series' slipped to 61 points ahead of Hyundai while Volkswagen 2 (the one car team) had closed to within a point of (the two car) M-Sport WRT. Mikkelsen had retaken second place in the Drivers' series, behind Ogier with Paddon third and Sordo and Latvala equal fourth. This was truly a rally of two parts, but the first two days has whetted the appetite for the next world championship event, the Neste Rally Finland, where the speeds are the highest in the championship and where DMack declared the stages also suited them their new generation gravel tyres. Mikkelsen rounded off his ten years in the sport in fine style and was effusive in his respect and sympathy for Tanak. "We needed a fast pace to keep the pressure on Ott. What happened to Ott had happened (last year) to me in Sweden" Ott was ebullient, "It was hard to take, but there will be a pay-back time!" 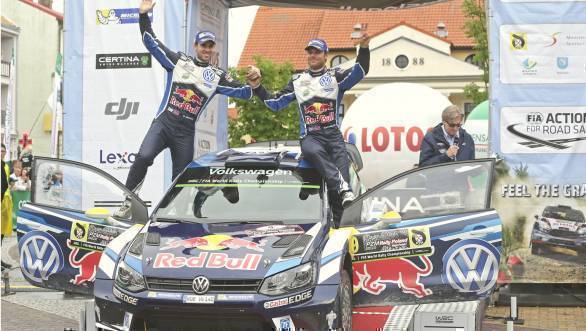 There was a remarkable 25 car entry for WRC2 where four different drivers held the lead, Karl Kruuda (Ford) and the Skodas of Teemu Suninen and the two official team drivers Pontus Tidemand and Esapekka Lappi. The private Oreca team driver Suninen won but chasing hard through the event was the Fiesta Evo of series leader Elfyn Evans who finished second. In fourth place was Polish driver Kajetan Kajetanowicz, the European rally champion competing on a WRC event for the first time. Tidemand was leading when a suspension ball joint failed on Day 1. Nicolas Fuchs dropped back from fourth when he rolled on the final day. Evans retained his lead in the series ahead of Suninen, Fuchs and Tidemand.

In WRC3 and Junior championship drivers were unchallenged with Simone Tempestini finishing over three minutes ahead for Sebastien Loeb's protégé Terry Folb, after Ole Christian Veiby dropped back late on Saturday with a broken driveshaft. Early leader Andrea Crugnola was delayed with a broken radiator. Tempestini was now in third place in the series behind the non competing Fabre and Andolfi. In the Drive DMack Fiesta Trophy category, the little cars suffered from running at the rear of the field and most of the drivers suffered punctures. In the end the win went to the Ulster driver Jon Armstrong who beat Welsh driver Osian Pryce with the Portuguese driver Bernardo Sousa third. Remarkably all nine DDFT starters finished the event. Pryce leading the series from Armstrong and Max Vatanen.