Marching onwards in his dominating rally career, Sebastien Ogier achieved the first quarter century victory in his career on home ground when he won the Rally Automobile Monte Carlo for a third time, based at his native city Gap. When it was announced that Sebastien Loeb would return from retirement to compete in the event, as part of special Citroen anniversary celebrations (60 years since the launch of the DS model), the prospect of Ogier challenging Loeb was being billed as the rally highlight of the century. When Loeb snatched a 22 second lead on the opening stage, over Ott Tanak rather than Ogier, every sense of anticipation was heightened. That lasted for nearly twenty four hours, until the final stage of the Friday, when Loeb damaged his suspension and incurred a Rally2 penalty. 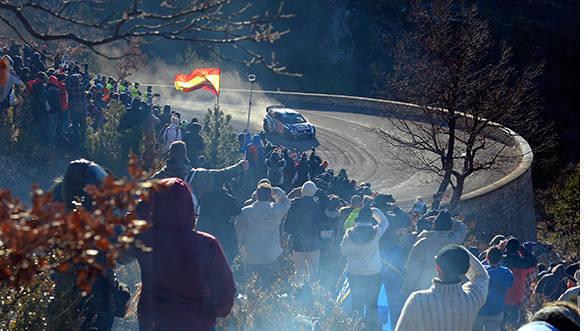 Loeb's mistake came at the height of the battle between the two "Sebs", shortly after Ogier had clawed his way into the lead. At that moment, most of the excitement in the overall result evaporated. It was a second disaster for the Citroen team as their favoured regular driver Kris Meeke, had performed a similar misdemeanour on the same stage as Loeb with the same consequence. Both drivers returned to the fray on the Saturday, both eventually achieving top ten finishing positions  but the earlier decision to let their driver Mads Ostberg run as a free championship agent had cost them clearly points-wise. VW went on to score a 1-2-3 result, Ostberg was next best driver, ahead of the Hyundai of Thierry Neuville who narrowly beat his team-mate Dani Sordo.

Once again Meeke set about seeking absolution for his error and proceeded to make a series of top times near the end of the event, ending up the third-fastest driver of the event, behind Loeb  and the privateer Robert Kubica. Monte Carlo proved to be yet another classic Kubica event, full of hope and spectacle and overladen with disappointment as one setback followed another, finally crashing heavily on the penultimate stage. He had a disastrous early event, getting stuck without lights after spinning his car on the second stage, and running near the front of the field in early morning frost and fog the next morning. Disadvantage turned to advantage when he found he was driving over cleaner roads than later drivers on Friday, helping him make his first fastest time on stage 4. Then came a spectacular exit on the final Friday stage. The following morning he enjoyed the chance of running Pirelli tyres, and hoped to maintain the Italian company's tradition of excellence on the specialist Sisteron stage but it all went wrong. He was denied a prestigious stage win when his Fiesta's handbrake failed. 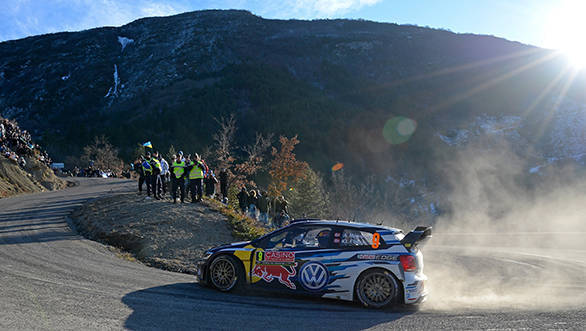 Citroens, with their eight stage wins, were the fastest cars on the event but their championship tactics let them down, Ostberg being denied the chance to run with a 2015 specification car or for manufacturer points. Both the Hyundais were 2014 models and this showed, their drivers only achieving three top-three stage times all event  and that at the end of the event but consolation was both cars did finish after their debut failure at the event last year. The M-Sport cars fared little better. Ott Tanak had one spectacular moment, second place on the opening stage, but never any better on only his second Monte Carlo event, while Elfyn Evans was again off the pace though he worked his way up to fifth by Saturday lunchtime before sliding off the road and damaging his suspension. All of which emphasised the dramatic efforts of Kubica! Of the two registered private teams using Pirelli tyres, Martin Prokop finished ninth overall and the highest placed on his tyres while Lorenzo Bertelli starting out on his WRC career finished a long way behind following problems on the Saturday. Close to the top of the event Latvala found himself in second place when Loeb damaged his suspension and held on at varying distances behind his team-mate all the event and all the time safely ahead of Andreas Mikkelsen, in a 2014 model VW.

The new VW and Citroens have now finally broken cover, and the effect of the permitted improvements have manifested themselves, and the plans to hatch the new M-Sport Fiesta and Hyundai are being laid. The Volkswagens are still dominant. The world championship in 2015 is promising many exciting things.

Stephane Lefebvre led the WRC2 category from start to finish in his Citroen DS3 R5, finally heading the Peugeot 208 T16 of Craig Breen, who spent a long time catching up after handling problems early in the event. In a complete turnaround from previous form, four of the top six WRC2 finishers were driving the French R5 models, with third place the Skoda Fabia S2000 of Armin Kremer finishing ahead of Eric Camilli's Ford Fiesta R5. Camilli fought back after a disaster on the opening stage of the rally, climbing back after a series of fastest times to third place, but then impacted a tree and considered himself lucky to finish fourth. Pushing Lefebvre hard for a long time was Slovakian driver Martin Koci who was lying second when he impacted a tree on the final stage on the Saturday, leaving Lefebvre with a lead of almost three minutes over Kremer. Julian Maurin was the only RRC driver on the event and retired off the road, when third while the South African driver Henk Lategan also went off the road but finished sixth.

This year the WRC3 category is again heavily biased but not exclusively aligned with the FIA's Junior championship. A surprise turn of speed was shown by the reigning British champion Daniel McKenna from Ireland, who led after the first stage, but who later retired with gearbox trouble. Following him into the lead was Quentin Gilbert who fought off a challenge from Terry Folb and then Ole Christian Veiby to win the category for the second year running. In the end Christian Riedemann had fought back into second place. Notable was the performance of Stephane Consani, the driver who lost his licence in a controversial incident at the Rallye de France in 2013 won two stages and finished fifth in WRC3 in a Renault Clio Turbo, a car excluded from the Junior championship.