The 35 year old Ulsterman, Kris Meeke, has finally won a world championship rally on his 57th attempt, 18 seconds ahead of his teammate Mads Ostberg, who had been delayed 40s with engine trouble on Day 1, with Elfyn Evans three minutes behind in third place, scoring his first WRC podium result. It was a very emotional occasion, Meeke immediately honoured the memory of his friend and mentor, the late Colin McRae, who 12 years ago had been the last British driver to win a WRC event. Meeke's Citroen DS3 WRC was the same favourite car of Sebastien Loeb, in which the Frenchman had earlier personally won eight of his own WRC victories.

Amid the carnage caused by some of the roughest WRC roads in memory, only five of the world Rally Cars completed the full route, the three team Citroens, and the Fiesta of Evans and the privateer Martin Prokop. Five Fiestas finished in the top ten, including WRC2 winner Abdulaziz Al Kuwari, Diego Dominguez who won the Codasur category and Federico Villagra who became the first driver in a Maxi Rally car to finish a WRC event. The rally was a hideous disappointment for Volkswagen with both Sebastien Ogier and Jari-Matti Latvala smitten by similar fuel injector troubles while Andreas Mikkelsen crashed on the final stage, a fate he shared with Hyundai's Thierry Neuville who had been lying fourth. 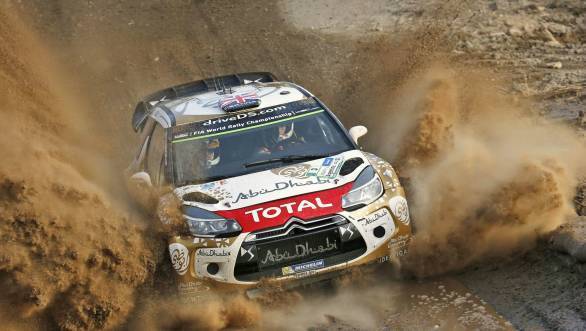 After a long detour on the Thursday afternoon for a superspecial stage in the neighbouring province of San Luis, the rally returned to Cordoba province for tradition on the Friday morning, and immediately the all conquering Volkswagen team was in big trouble on the 51km rough Ascochinga stage. Firstly Sebastien Ogier (and several other drivers) took a wrong route, which upset the Stewards, then shortly afterwards an injector failed and the car was only running on three cylinders, stopping before the end of the stage. Then on the next stage Andreas Mikkelsen punctured and a suspension strut came through the bonnet. Jari-Matti Latvala was cautious, "trying to be clever." The three Hyundais were in only a little better fortune, with Thierry Neuville losing four minutes after he punctured, wrecking his suspension and creating dust clouds obstructing Elfyn Evans behind. Neuville was later caught in the dust of the punctured VW of Mikkelsen and impatiently nudged him out of the way!

Dust was a big problem in the dry conditions and the organisers extended the gaps between the drivers during Day 2. Dani Sordo was delayed by power steering failure and not knowing the extent of the carnage Meeke had made a bolt for glory on the long stage, trusting in the strength of his Citroen. Suddenly he was more than a half minute in the lead. Meeke held the lead for two days, fighting his way through problems like surviving with a broken handbrake, having a puncture (like most of the other drivers), having a spin, stalling in a water crossing but always pushing forwards.

By the end of Day 1, Citroen found themselves lying 1-2. Mads Ostberg was frustrated that his earlier delay preventing him taking the chance to keep his teammate Meeke under pressure but pursued his own anti-stress strategy even though he had to and fight off a fever which drained him of energy. He left his codriver Jonas Andersson to drive the road sections. Jari-Matti Latvala upheld VW's honour holding second place for three stages but then he had a gearbox problem. This left him struggling through the first afternoon and eventually dropped behind Ostberg until the final morning. M-Sport had hoped to benefit from reliability and Elfyn did well, but Ott Tanak stopped on a repeat of the long stage when he broke his suspension in a water crossing. By the end of Day 2 the pattern was clear for VW. Ogier was still outside the Manufacturers' points regime, so Latvala knew he must take no risk and was lying 25.1 seconds behind Ostberg on Sunday morning. Should he try to catch him in the remaining 32km of stages but he didn't have to decide. He had a similar injection problem to Ogier but this time he was out of the rally altogether. 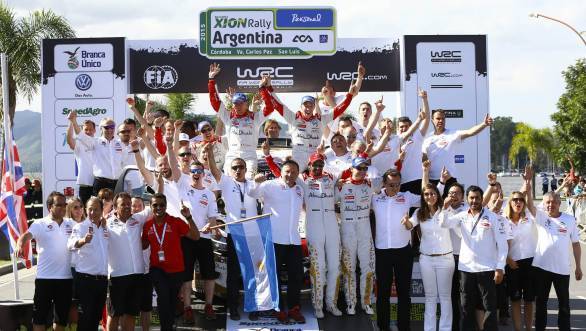 There was a frantic turnaround of fortunes on the final day. Dani Sordo passed Khalid Al Qassimi and finished fifth overall behind Martin Prokop, whose fourth place equalled his best WRC result. Sebastien Ogier successfully contained all his problems in one event when he had to overcome power steering failure on Day 2 but rounded off the weekend finishing 17th overall by scoring maximum points on the Power stage. Latvala's retirement meant it was only the second time VW had failed to gain a podium position in their WRC campaign. Citroen steamed on to their first WRC victory for 20 months with Meeke finally shaking off the nightmare last-day disaster memories of Germany last year.

At the start of the rally it seemed that Yuriy Protasov would walk away with victory in the WRC2 category in his Fiesta RRC but then on stage 3 he damaged the suspension and lost a wheel, leading to a heroic effort at a repair beside the road but then incurring a draconian penalty from the Stewards for not running on a road section on four rotating wheels. This left fellow Fiesta RRC driver Abdulaziz Al Kuwari in command and he held the lead for the rest of the rally ahead of the Paraguayan driver Diego Dominguez (Fiesta R5). Nicolas Fuchs had various troubles with a broken steering rack and then he retired on Day 2 with a broken oil cooler. Jari Ketomaa was another having a troubled event with punctures, then a dramatic moment arriving at the end of stage 5 without brakes. Non championship RC2 driver Stephane Lefebvre had climbed momentarily into tenth overall position, but then ingested water and that was the end of his rally. No drivers entered the WRC3 category.

In the Manufacturers standings Volkswagen continued in the lead with Citroen now equal on points with Hyundai Motorsport in second place. Mads Ostberg rises up into second place ahead of Mikkelsen with Elfyn Evans fourth. Jari Ketomaa has taken in the lead in the WRC2 Drivers' standings and his Drive DMack team extended their lead in the Team's Category while Gianluca Linari was now joint leader with Simone Tempestini in the Production Car Cup.