Overcoming the still-painful disappointments in Germany last month, Volkswagen made no mistakes this time, their cars gaining the team's first 1-2-3 result in the WRC, clinching their second successive World Manufacturers' title, giving World Champion Sebastien Ogier his 15th victory win for the VW team. An inspired tyre choice mid-rally helped Ogier pull ahead of his team-mate Jari-Matti Latvala. Citroen driver Kris Meeke took advantage of favourable running order and was again the only driver able to threaten the dominance of the Volkswagens, but the 1minute 1second penalty imposed for taking a shortcut on a stage denied him the chance of a podium result. Rallye Deutschland winners Hyundai were far behind, while, after a promising start, Ford driver Mikko Hirvonen only managed fifth place although Fiesta cars completely dominated the WRC2 category. 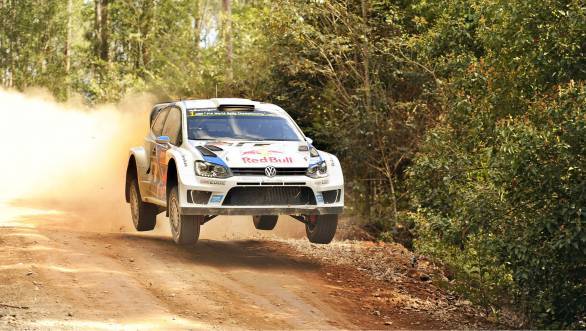 Ogier's dominant championship position meant he expected his unfavourable initial starting position on the rally would seriously damage his chances, and eighth running Kris Meeke was able to take an early lead the first time through the stages. Meeke continued in the lead as the early running Ogier and Latvala started to catch up, only finally relinquishing the lead after the superspecial stages at the end of the first day. From then on it was the Latvala and Ogier show, leaving Meeke to fight a close battle for third place with VW's cadet driver Andreas Mikkelsen. Halfway through Day 2, Ogier took a successful gamble on the long Nambucca stage remaining dry, despite the approach of threatening clouds, fitting harder tyres than his team-mate. From then onwards the result was a formality, with Latvala knowing his dwindling championship hopes needed more overall victories. The final stages were full of 'will he, won't he' moments for Jari-Matti as he tried to close the eight-second gap on Ogier but in the end Sebastien, running three minutes behind him paced himself precisely to enjoy yet another victory. 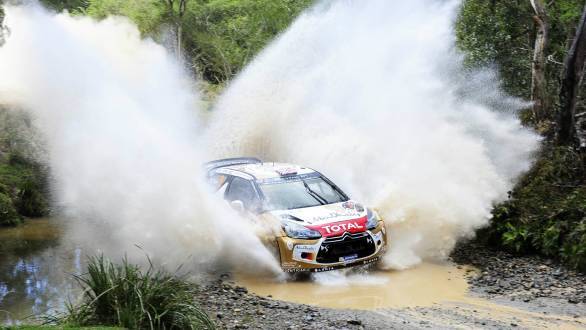 Strongest performance of the season so far for Kris Meeke, who led four laps of the rally before the Volkswagen drivers caught up

Over at Citroen Kris Meeke was unfazed by his German disappointment and took full advantage on the first morning of his lowly championship standing. For the second WRC event running he was leading overall, not for a half hour this time but for four stages! Team-mate Mads Ostberg was enjoying a close battle for sixth place with Hayden Paddon's Hyundai before losing over ten minutes on the penultimate stage when the rear suspension collapsed. "Absolutely unreal. I cannot believe my bad luck. I didn't hit anything!" he said in exasperation knowing that a good steady result was essential while team chiefs composed their line-up for next year, growing more confident and faster as the rally progressed.

Newcomers to Australia found the event challenging, not the least because of the FIA's ban on rally car testing on long haul event destinations. Hyundai went to Australia with the local rally driver Chris Atkinson making a second guest appearance six months after he drove for the team in Mexico. He again found the current pace in the WRC difficult and even worse he had to drive Days 2 and 3 first on the road in dry conditions. Neuville was lying sixth, ahead of Paddon, when he slid wide and damaged the suspension on the first afternoon, dropping to twelfth and eventually finishing seventh. Although Hyundai's original WRC plans were first hatched in this country the current team were new to the territory and Neuville reported loss of traction at the start of the event. Difficult to pinpoint Atkinson's problems beyond general WRC rustiness. He didn't actually know the stages, he had never done a rally in this region but New Zealander Paddon impressed in the N-team Hyundai team car.

Ford had long experience of Australian rallying, Mikko Hirvonen having won this event three times in the recent past in various different localities. On Day 1 he enjoyed good running conditions like Meeke and momentarily was lying equal second before losing time with bad tyre choices. Elfyn Evans was conscious of the treacherous proximity of the trees on the fast and narrow tracks on his first major rally in Australia, finding the stages a daunting experience but disappointed to be struggling just in the top ten. Robert Kubica was another Australian rally rookie, gradually becoming accustomed to the conditions but he went off the road on stage 12, falling from eighth to tenth when distracted by an in-car safety warning light.

Both Ogier and Latvala were happy to put the miseries of Germany behind them. Jari-Matti said "It's been a really, really great fight. I really enjoyed myself but annoyed I made my wrong tyre choice and that's where I lost my lead. Winning the title is now getting more and more difficult, I need to start preparing for 2015 so that's the target". 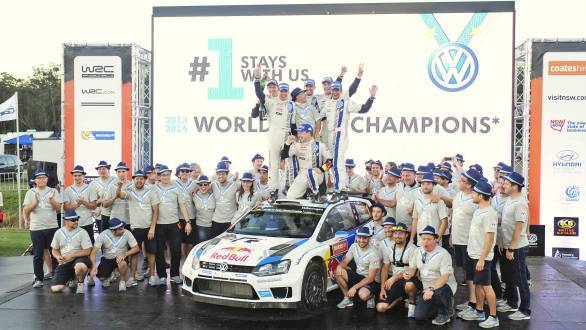 Seb Ogier said "No better way to come back for the team after Germany, its just amazing". And after days of gloom for VW chief Jost Capito, upset the FIA had rejected his beloved new WRC format plan, was all smiles again. "It had been very frustrating for us to get such a bad result at home (in Germany) so now I think we made something special with 1-2-3. I am very happy for the team and also for myself!" The Drivers' title had come down to being between just Ogier and Latvala.

Nasser Al-Attiyah won the WRC2 category, a necessary stop in his late-season challenge for the championship title after a close rally-long battle with Yazeed Al Rajhi, which only ended on the final morning when Yazeed went off the road. This left the Qatari over two minutes in front of Jari Ketomaa who survived a roll at the superspecial venue on the second evening. The stage was stopped and in the ensuing confusion he was allowed to rerun the stage and receive a penalty for the calculated time loss. He kept his position behind Al-Attiyah, in front of Yuri Protasov and Lorenzo Bertelli. Fastest driver in the category as usual was Ott Tanak, but he crashed on the final afternoon. Sixth finisher was Max Rendina, only Production Car Cup starter in the event, who gained his fifth maximum score in the series and must now wait to see how his only rival Juan Carlos Alonso fares in his remaining rounds this year. With three rounds to go in the WRC2 category nine contenders remain with a chance of the Drivers' title.