The excitement of Rally Finland never ends. Just when it seemed, for once, that the steam had gone out of the battle for the lead  suddenly it flared up again and the closest victory in the history of the event came to pass. Forget that Volkswagen has now won 12 rallies in succession, this year's Neste Oil Rally Finland provided a thrilling battle between two teammates, one heading for a second world title, the other, for what matters most for every Finnish driver, victory at Jyvaskyla. Kris Meeke finally cemented global respect when he scored his third podium result of the season, behind Jari-Matti Latvala and Sebastien Ogier, on the fastest rally in the WRC. In WRC2, victory went to the normally-aspirated Ford Fiesta S2000 of Karl Kruuda beating the newer formula R5 and RRC cars. A revelation was the winner of WRC3, making his debut prize drive appearance in the series was local driver Teemu Suninen who despite rolling his car, beat his rivals who were qualifiers in the Junior series, which was won by Martin Koci. In the DMack Fiesta category Sander Parn is cleaning the decks, gaining his third successive win from the three rounds held so far. "It's all about Rally Finland!" claimed Jari-Matti Latvala at a critical moment on the penultimate day of the rally, when suddenly his half minute lead was almost annihilated by a broken brake caliper. The final day's three stages were going to be the test of character and determination for the 29 year old Finn, as he strove to resist the assault of his world champion teammate who suddenly sensed the chance of an unexpected victory. Latvala achieved his second home WRC win, admitting that holding on to his now slender lead over Ogier was hard. After the first pass over the undulating Ruuhimaki stage he said "I never drove like that before. I didn't lift at all! I came to this rally to drive for victory". Two stages later he did just that, by 3.6 seconds. 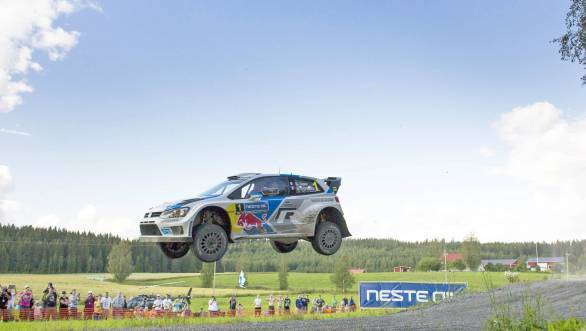 The season had suddenly burst into life after a short summer holiday. The start of the second half of the season, with two new tyre designs from both Michelin and Pirelli and a challenge to Finnish supremacy from the other side of the Gulf of Finland. Estonian drivers won two of the major categories: WRC2 by Karl Kruuda and the DMack Fiesta category by Sander Parn. The rally started with dramatic weather. Several weeks of dry hot weather had left the stages hard and slippery, to such an extent that VW feared their three drivers, running for two full days as first cars through stages, had little chance of overall success. Suddenly the weather turned during reconnaissance but then started to dry out, but another determined storm descended as the rally got under way. The rain settled the dust and made the stages faster than ever. In the end the only driver who denied VW another top three result was Kris Meeke. After so many heart breaking disappointments in the past, Meeke once again proved why Citroen had not given up hope in him, following up his third places in Monte Carlo and Argentina with another! 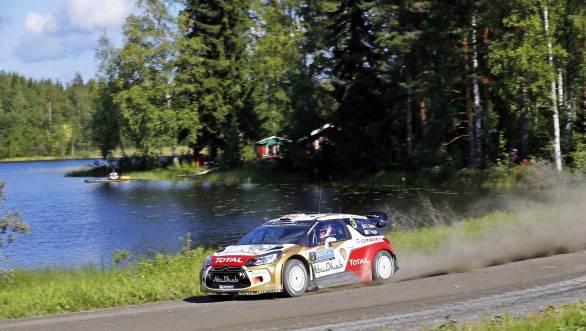 The Citroens were the only team to keep the Volkswagens within sight, Meeke gaining one scratch time when conditions favoured his running position at that time. His teammate Mads Ostberg struggled early on but had recovered to fourth place behind Meeke before Ostberg suffered set-up problems, and then was forced to retire in strange circumstances. He had impacted a rock embedded in the road and the shock had damaged the roll cage in the front of the car, forcing scrutineers to deny permission to carry on. The Fords had a bad event. Both Mikko Hirvonen and Elfyn Evans were off the pace, finishing fifth and seventh, Robert Kubica had a most eventful time (an impact in testing, a road accident in recce and then a crash during the event). DMack tyre privateer Henning Solberg came ninth, the highest placed non Michelin runner, which highlighted the impressive tenth place gained by Kruuda in his four year old Fiesta S2000.

This rally was not a very good event for Hyundai, either. Their top driver Thierry Neuville went off the road on the opening Friday stage and scrutineers also decided the car was too badly damaged to carry on, then on the next stage Juho Hanninen punctured and rolled. He dropped from fourth to ninth leaving Hayden Paddon the best place Hyundai in sixth place. Then on the final morning Paddon had power steering failure and dropped to eighth and Hanninen ended up sixth.

After a lack lustre run in Poland in a Peugeot 208 T16 R5 car, Karl Kruuda turned up in Jyvaskyla with an old, but faithful, Fiesta S2000 which he runs in the Finnish national championship. After a delay on Thursday evening for Ott Tanak spent two days holding second place behind the Fiesta R5 of his Drive DMack teammate Jari Ketomaa. Then on the Saturday morning Ketomaa punctured and had to stop to change the wheel, dropping over three minutes. This secured Kruuda in the lead. Tanak did not give up, winning 18 WRC2 stages before easing up in third place. Evyind Brynildsen was back in the WRC after a year away and had been lying third before the propshaft on his Fiesta RRC snapped. Eventually he recovered to finish fifth behind the similar RRC of Yazeed Al Rajhi. Sebastien Chardonnet retired his Citroen DS3 R5 after going off the road as did the Fiesta R5 drivers Lorenzo Bertelli (non championship on this occasion) and Oleksii Kikireshko, while the Mitsubishi shared between Max Rendina and Mario Pizzuti retired with engine trouble. Argentine Juan Carlos Alonso was the only Production Car points scorer.

Martin Koci led the WRC3 category from the start until two stages from the finish when he was overtaken by the remarkable Teemu Suninen. Suninen did not qualify for the FIA Junior series as he did not run with specially control supplied tyres, so Koci (delayed with flywheel problems) gained maximum Junior points in front of Quentin Giordano and Molly Taylor. Sebastien Lefebvre had been lying third in the WRC3 before going off the road on Friday morning, gaining a lot of time penalties in order to rejoin under Rally2 rules. He eventually finished eighth of the nine finishers. Alastair Fisher was fifth in WRC3 after missing stages with transmission trouble. In the DMack Fiesta category eventual winner was Sander Parn who gradually caught and was able to pass Tom Cave, who damaged the suspension. Retirements included Nicoals Amiouni and Jose Suarez off the road and Marius Aasen with fuel pump failure on the final stage.

In the Championship standings Volkswagen's lead over Citroen in the Manufacturers' series has increased to 175 points and could clinch the series on the next event in Germany if they finish 1-2 again. In the Drivers' series, the three VW drivers remain at the head of the field with Ogier now 44 points ahead of Latvala, Ostberg is now 29 points behind Mikkelsen in fourth place, while Meeke has risen to sixth. In WRC2, there was no change at the head of the field with both Bertelli and Protasov not scoring points on this occasion, but Kruuda has jumped up to third place ahead of Ketomaa. In the Production Cup Rendina still leads Alonso but now by only 11 points but with Alonso having two events in hand. In both WRC3 and Junior Lefebvre leads Koci. In the DMack Fiesta series Parn leads by 37 points.