The Volkswagen I.D. R continued its record-breaking ways, smashing the outright hill climb record at the 2019 Goodwood Festival of Speed. The 671 bhp I.D. R, piloted by driver Romain Dumas, clocked a time of 39.90 seconds in the timed shootout on Sunday. Earlier on, it had managed to set a time of 41.18 seconds in a practice session on the second day of the event, already faster than the 20-year old record of 41.60 seconds set by Nick Heidfeld in a McLaren MP4/13 Formula 1 car. After it's record-breaking run at Pikes Peak last year, Volkswagen took the car to Goodwood, where it smashed the electric car lap record. It then went to the Nurburgring this year, setting the fastest lap ever for an electric car with a time of 6min 05.336sec. Before heading to the 2019 edition of the Goodwood Festival of Speed, the car was adapted for the narrow hill climb section. The battery was reduced in size, in order to reduce the weight of the car to below 1000kg including the driver. 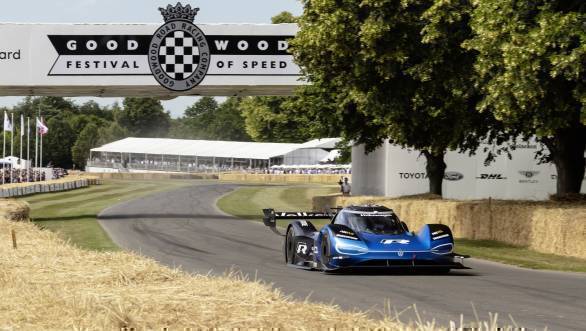 Romain Dumas clocked a time of 39.90 in the VW I.D. R., the new outright lap record at the Goodwood FOS

Dumas also managed to take victory on Sunday's outright shootout at the FOS.

"In setting the new all-time record at the 'Goodwood Festival of Speed', the ID.R has once again shown that Volkswagen's electric powertrain can outperform even the most powerful conventional powertrains," said Volkswagen Motorsport Director Sven Smeets. "Romain Dumas exploited the full potential of the ID.R on this short but tricky track. After the victory on Pikes Peak and the e-record on the Nürburgring-Nordschleife, he has now achieved another milestone for electromobility. It was a strong performance from our whole team, which only had a very short time, in which to get a lightweight variant of the ID.R up and running for the 'Festival of Speed'." 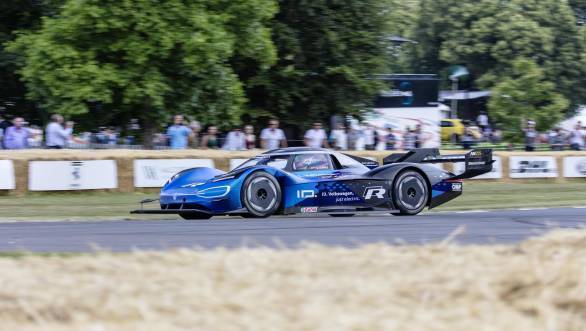 Romain Dumas in the Volkswagen ID.R at the 2019 Goodwood Festival of Speed

"I am very proud to have set the all-time record in Goodwood with the ID.R. The short hillclimb is a very special challenge. Because the track is so short, I could not afford to make even the slightest mistake, and every aspect of the fine-tuning of the ID.R had to be perfect. That was particularly challenging, as we were not able to test on the route beforehand," said Romain Dumas, who had previously taken overall victory with the electric record at the same venue in 2018. 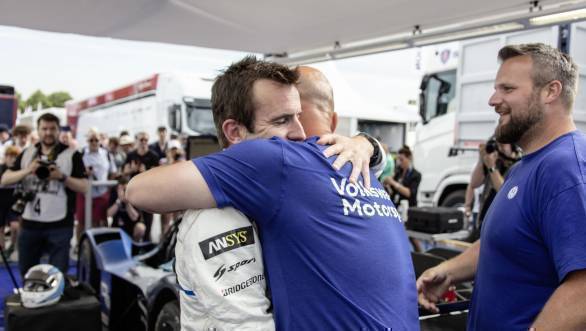