Video worth watching: Wind tunnel testing of the 2017 Ford GT

The Ford GT is easily one of the sexiest cars to come out of 2015. The intricate detailing along with all the scoops and grilles can keep us drooling for hours together. However, unlike a lot of the cars these days, each and every grille and scoop serves an aerodynamic purpose, according to Ford's engineer Nick Terzes. The Ford GT might have won the GTE class at the 24 Hours of Le Mans, but it still isn't ready of production. 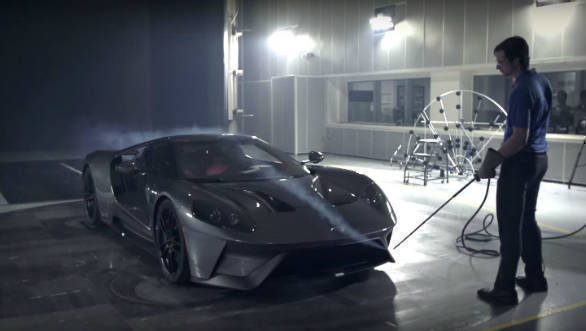 Ford recently released this video of a Ford GT undergoing wind tunnel tests in Michigan, USA to make final tweaks for Job 1 (which will be the first car off the assembly line). The test checks the aerodynamics and the interior wind noise acoustics of the Ford GT with wind speeds of around 200kmph. The car is parked over scales (which you'll notice under each tyre) which measure horizontal aerodynamic forces (drag) and vertical aerodynamic forces (downforce) at that speed.

Honestly, we could spend a lot of time watching the smoke flow oh so smoothly across the car, through the scoops and over the spoiler. There's something very pleasing about it. But hey, we'll let you decide for yourself. Check out the video below.