Christian von Koenigsegg is one of the brightest and most innovative minds in the automobile world. Those who know of his creations recognise them as some of the fastest and wildest cars. Unfortunately, Koenigsegg can't quite try for the outright world record for top speed as it's next to impossible to find a test track long enough to support the 420kmph plus speeds his latest car can achieve. The One:1 which produces 1,341PS and weighs the exact same 1,341kg (hence the name) could very easily be the fastest production road car ever. Current title holder Bugatti set their record of 431kmph on the Ehra-Lessien high speed test track which has a near 9km long straight. However, that track is owned by the Volkswagen Group so only VAG cars can ever hope to test on it. That means that the supercar race for top speed seems to be at a close now despite the fact that companies like Koenigsegg and Hennessey (with its Venom) claim higher theoretical top speeds. 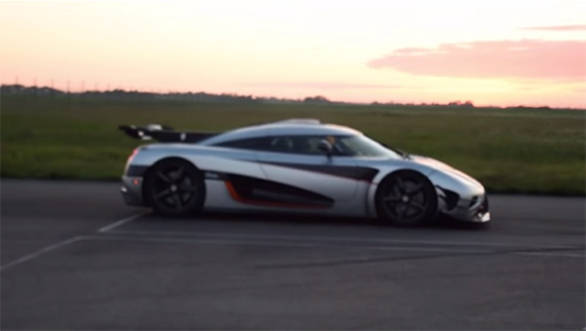 That leaves Christian looking for other records to break. Like this monumental 17.9 second  0-300-0kmph run in the One:1 which is nearly 4 seconds quicker than the already mental Koenigsegg Agera R. 0-300kmph comes up in a ridiculous 11.92s which is just as much as your average 100PS family sedan takes to hit 100kmph.

But what truly boggles the mind is not just how fast the car is but how stable it remains through the run. A fact demonstrated by test driver Robert Serwanski as he kept his hands off the wheel almost the entire time, occasionally making very minor precautionary steering inputs. This amazing stability comes through the unique Triplex suspension system Christian has designed. In very basic terms, the rear suspension on either side is connected via a third damper that runs along the top. This helps cancel out the innate disturbances that would be caused to the opposite wheel when one wheel encounters a bump thanks to the anti-roll bars. Koenigsegg says this technology helps deliver surprising low speed ride comfort while still retaining maximum agility and reactiveness in high speed driving conditions. 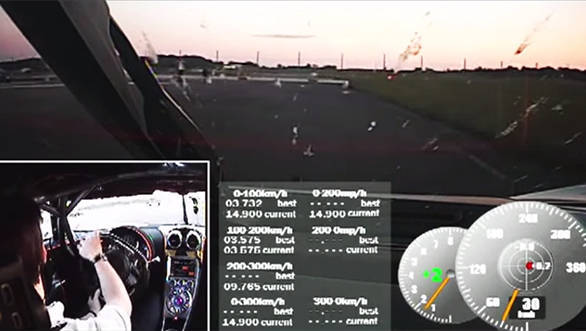 In the video, you will see that the driver exceeds 300kmph before getting hard on the brakes. This is done to ensure that the car crosses 300kmph and that the braking force is at maximum when the car is decelerating from 300kmph. The cumulative times are then calculated from the Vbox GPS data recorder, which by the way, is the same equipment we use in our testing procedure.

Another reason the times are calculated this way is so that if the driver were to slam the brakes at 300kmph flat, the result would be more of a test of the driver's reaction time and less of the car's capability. The car used for the run was Koenigsegg's own development car that weighs 50kg more than standard thanks to an added roll cage. Speaking of which, just six of these ultra exclusive cars will be made. But perhaps the most amazing thing is that Christian says he believes the One:1 has even more to give as the company wasn't actively attempting to set a record. No, these numbers were recorded in a routine test run. Phew!