Video: A vacuum emergency braking concept that could save your life 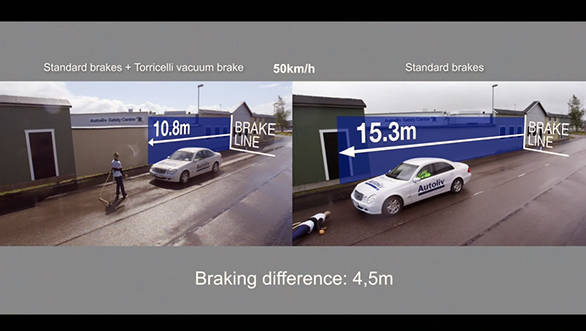 Sometimes the most effective solutions are also the most efficient. And when you watch this video you'll agree regarding the simplicity of the concept behind this emergency braking system. The system is called the Torricelli (named after a 17th century Italian scientist Evangelista Torricelli) Brake and it is built by Swedish component manufacturer Autoliv who specialises in safety features like seatbelts, airbags and much more.

The intention here is to supplement the autonomous braking system that many of today's high end cars come with. A lot of accidents happen because the driver doesn't brake hard enough or is distracted and doesn't get on the brakes soon enough. The system works by using a reasonably sized plate that drops from the car's underbody towards the road. A large hose is connected to it and this is probably connected to some sort of a vacuum pump that helps the plate generate a strong vacuum under the car and literally suck the car to a stop. The force of vacuum that can be generated is 15,000 Newton or roughly 1,530kgf. That's strong enough to completely dry out a stretch of the wet tarmac that the plate covered in the video!

The Torricelli system can only be used at speeds below 70kmph as the system is too strong for regular seat belt components to handle. Still, it helped reduce the braking distance from 50kmph to 0 by a hugely impressive 40 per cent! Autoliv are currently in the process of showing the technology off to OEMs and they say they have received considerable positive response. From the video, the technology would seem compact, light and not too complicated to incorporate into a vehicle's design. Time will tell whether this fascinating concept can become a reality 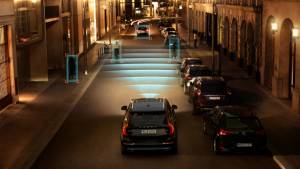