Toyota Racing Series: Double podium for Jehan Daruvala at Round 3

It was a good weekend for Jehan Daruvala at Round 3 of the Toyota Racing Series in Waikato, New Zealand. Jehan proved to be consistently quick all through the weekend, and managed to claim two podiums of the three races that were held. This meant that the Indian driver managed to rack up a decent amount of points, moving up the championship standings from sixth to third overall. 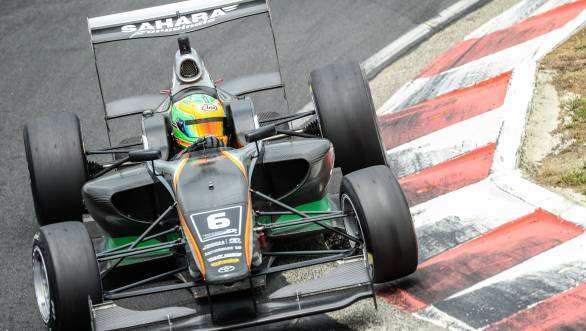 Jehan is currently ranked third in the championship, with two rounds to go

For the first race, Jehan qualified 0.17 seconds behind pole man Lando Norris. The pair of racers managed to get off to a good start when the race just began. Over the next few laps though, Norris pulled away from Daruvala, who in turn managed to open up a gap to the racers behind him. While during the closing stages of the race Jehan did manage to catch up with Norris, notching the fastest lap of the race along the way, Norris proved to be unbeatable. He won by 1.5 seconds, while Daruvala finished second, with Pedro Piquet third.

The second race featured a reverse grid, with the top eight finishers of Race 1 being reversed. Jehan started seventh, and managed a good start that saw him make it nearly to fourth position. Unfortunately, he was pushed wide by another racer and ended up in the grass, and finally down in tenth place. The race was restarted twice behind the Safety Car, and Jehan managed to overtake and move up to seventh. When a few cars ahead of him crashed out, he managed to move up to fourth position and earn points. 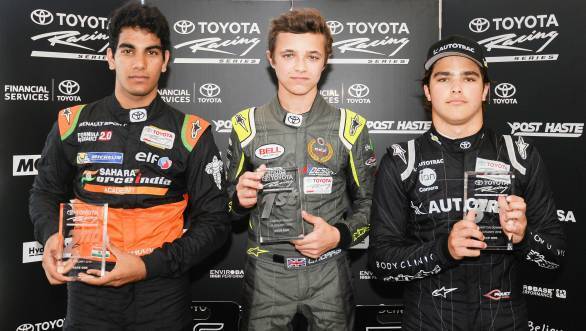 Lando Norris, Jehan Daruvala and Pedro Piquet with their trophies after Race 1 at Waikato

For the third race, qualifying proved to be very close, with the top three drivers all within 0.09 seconds of each other. Pedro Piquet was on pole ahead of Lando Norris and Jehan. When Lando was slapped with a penalty, it meant that Jehan was allowed to start second. Unfortunately, the Indian driver lost a place at the start. There were two Safety Car periods during the race, with Brazilian driver Piquet eventually winning. Second place went to New Zealand's James Munro. Jehan's third place meant that he managed two podiums of the weekend.

"I have been consistent the entire weekend. It was unfortunate that I fell from fifth to tenth in race 2. Climbing back to fourth ensured the points. The championship is much closer now but I am going to stay focused and treat each race individually. I must thank the team for a good and consistent car as well." said Jehan.

There are two rounds, with a total of six races, remaining in the championship. Jehan currently stands third, merely three points behind Piquet. We'll let you know how things go for Jehan this coming weekend in Taupo. Watch this space.