One year ago CS Santosh had headed to the Abu Dhabi Desert Challenge, the first round of the World Cross Country Rally Championship with great hopes. Things didn't go so well for him and the rider had a tough time when he crashed and the fuel tank on his motorcycle went up in flames. A year later Santosh's performance at that same event is something that firmly puts behind the mishap of the previous year. Riding a KTM 450, Santosh finished a strong tenth of 36 starters, in the event that was eventually won by Paolo Goncalves.

Santosh had no testing time ahead of the rally, and his first time on the motorcycle was during the event itself. Finishing in the top 15 during the Super Special Stage meant he could choose his starting position for the next day's rallying, and Santosh chose to start at the back. This because it becomes easier to navigate with riders ahead of you. At the end of the second day's rallying Santosh was within the top 10 overall, with his best stage finish through the event being ninth place. 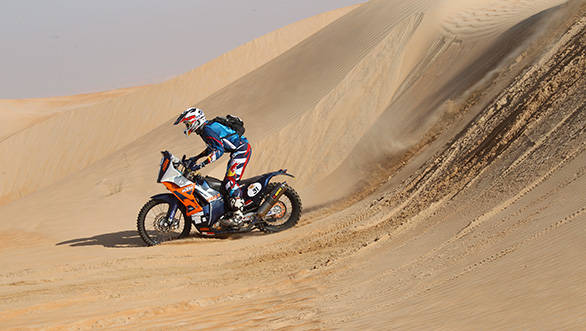 Day 3 was a little tricky for the Bangalore rider, though. He lost a lot of time during the first 150km due to the fact that his rear brake wasn't working and he needed to bring the bike in to service. In order to make up for lost time he pushed really hard during the next 100km, eventually crashing, falling down a steep gorge. After that, he resorted to a calmer approach and chose not to push too hard.

Speaking to OVERDRIVE, a rather exhausted Santosh declared that he was happy with his result, especially given that it was a first for the country. "I think this is the first time that anyone from our great nation has managed something like this at a series like the World Cross Country Championship." Of course the event wasn't easy, especially given that he had no testing and the rally bike, especially when loaded with navigation equipment, is really heavy.

Santosh also plans on doing two more rounds of the WCCRC this year, with Egypt and Morocco on the cards. Like he's told us before, his ultimate aim is the Dakar Rally. 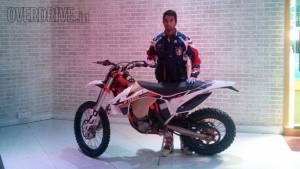