Yamaha has unveiled the Cross Hub Concept at the Tokyo Motor Show 2017. The Yamaha Cross Hub Concept is aimed at a young, active urban audience with a recreational lifestyle, which includes Yamaha enthusiasts, the company claims. It is hence built as a small urban pick-up truck. In markets including the US, the urban pick-up truck segment has been seeing an upswing, although there are barely any offerings in this segment in India. Yamaha has truly taken upon itself to provide some of the wackiest concepts at this year's Tokyo Motor Show, with the Yamaha Niken three-wheeled bike, and Yamaha Motoroid also showcased here. The Yamaha Cross Hub Concept appears to be a cross between two previous Yamaha concept platforms - the 2013 Motiv and 2015 Sports Ride - both of which were developed in collaboration with Mclaren F1 designer Gordon Murray. 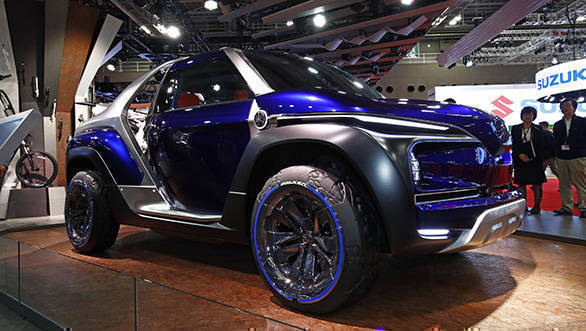 The Yamaha Cross Hub design features a unique three-seater diamond-shape layout, wherein the driver seat is in the centre and at front, flanked by a passenger seat diagonally behind on either side and one more behind the driver seat. This, according to Yamaha, maximises the use of available space in the cabin. The cabin and loading bay are separated by a massive exo-skeletal frame finished in satin silver. The loading bay itself has been built to carry two motorcycles, as Yamaha expects its active, urban customers to use it. Despite all this capability, the Cross Hub measures just under 4.5 metres in length. However, the company has not revealed details about the powertrain.