The limited-edition Hayabusa gets a two-tone candy daring red and glass sparkle black paintjob, with the paints sharing a blurred transition. The 3-spoke wheels are black with a stripe of red, and so are the brakes with red 'Brembo' printed on black. 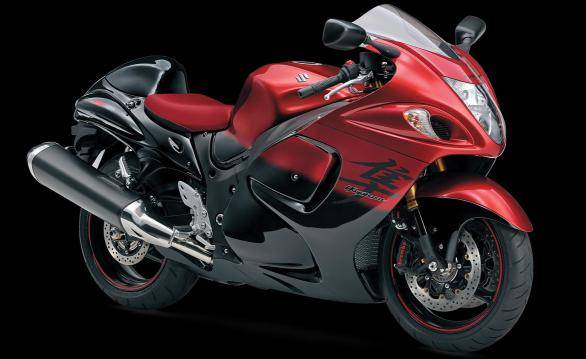 Rolled out to mark 50 years of Suzuki in the US market, the physical setup of the new Hayabusa remains unchanged and so do the mechanicals. It weighs 266kg and is powered by a liquid-cooled, DOHC, 1340cc, four-cylinder engine that delivers 173PS and  141Nm of max torque. This provides enough thrust to take the Busa from 0-100kmph in less than 3 seconds, while reaching limited speeds of 300kmph. Other mechanicals include ABS and  3-mode engine maps. The Busa has long being regarded as one of the fastest bike in the world and is widely acclaimed as a rider friendly superbike.

Prices have not been announced yet.