Suzuki takes their first step towards MotoGP return in 2014 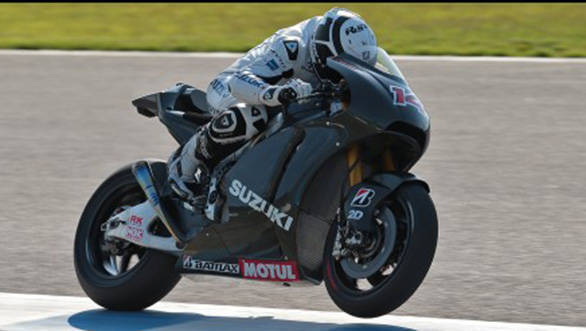 We've been waiting for this one. Suzuki had promised they will come back to MotoGP when they bid adieu at the end of 2011, and true to their word, the Japanese manufacturer is working towards a planned 2014 return. Suzuki is yet to confirm the 2014 return officially, but has begun testing. Current CRT rider Randy de Puniet who rides for the Power Electronics Aspar team tested Suzuki's new 1000cc prototype at the Twin Ring Motegi in Japan last week. De Puniet flew to Japan immediately after his home GP at Le Mans in France to test for Suzuki, but is not allowed to speak to the media currently, although his manager Eric Mahe mentioned that the test was positive. Mahe also mentioned that Suzuki were pleasantly surprised with the useful feedback De Puniet was able to provide them with over the two days of testing, during which he was able to put in about 100 laps on the test mule.

De Puniet had also tested Suzuki's 800cc machine at the end of the 2011 season before the manufacturer pulled out of the premier racing series sighting financial troubles. He will now test for Suzuki at the official post race test scheduled to be at Barcelona, a day after the Catalunyan GP that will be held on June 16. Suzuki will also participate in a private test the same week, which Honda and Yamaha are expected to attend as well. Given the legendary relationship Suzuki has had with MotoGP, all we can say is we can't wait to see them make a comeback. Manufacturer involvements always benefits the sport, and we are hopeful Suzuki this time will ensure they have a plan in place, given Honda's current form.