The Raid de Himalaya is one of the toughest rallies in the world and the heat of competition in the confines of the Himalayas has often claimed its pound of flesh. At the 2016 event, the 18th edition of the Raid de Himalaya, Kolkota lad, Subhamoy Paul, riding a KTM 500 EXC had a critical accident that led to him passing away early in the morning of October 11. The accident took place near Chatru on day 3 of the rally, on the Losar to Gramphoo stage. The stage is tough because of the region it passes through which is nestled between two mountain ranges.

However, its fast and flowing sections are made of dirt that most riders and drivers find favourable to gain time on. Hence they push hard through this stage. On one such section, near Chatru, Subhamoy lost control and flew off his motorcycle, headfirst into a boulder. The resultant impact was catastrophic, splitting his helmet and transferring the shock to his head. Despite the First Response Vehicle reaching him immediately, and his body being airlifted from the spot within 5 minutes of the incident, Subhamoy Paul was declared dead on arrival at the hospital. Our heartfelt condolences go out to his family and friends who will miss him. 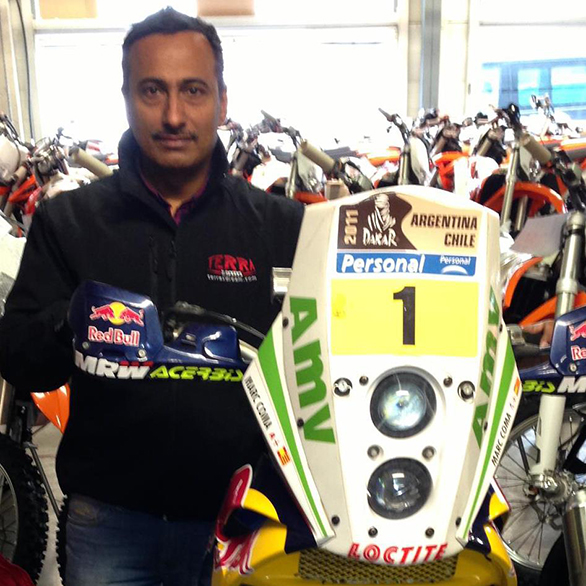 Subhamoy was known as an affable character, quiet, but game for the hardiest adventure. Aged 49, he has been riding for some 20-25 years competitively, both in the domestic and international circuits. His motorcycle for the Raid, a KTM 500 EXC, was prepared by close friend and fellow rider Balaram with whom he also rode in the Desert Storm earlier this year.

The Raid de Himalaya is no stranger to such catastrophe. Over 18 years it has seen several participants fall by the side as they fought hard to earn victory. The unforgiving terrain, hostile conditions and inclement weather bear their weight on the participants. Organised by the Himalayan Motorsport Association, the organisers, marshals and support staff have made every effort to maintain a level of safety and security comparable to any international class event. However, motorsport is dangerous, more so when it is as closely contested as it is at over 17,000 feet above sea level. In the last few years, choppers too have been put into service to airlift those who get injured critically. Unfortunately despite this, Subhamoy Paul could not be helped as it is suspected he died on impact.

The Xtreme category for cars, motorcycles and quads has been cancelled due to the tragedy. However, the Adventure category, which runs on the time speed and distance format (TSD), will go on though it too has been cut short and will return back to Manali, where the rally began from, soon.