It is season two and the hard charging behemoths from Tata's stables are back at the Buddh International Circuit at Greater Noida in India.

The Tata T1 Prima Truck Racing Championship, compared to the inaugural 2014 season, promises to be an even more exciting and action packed event this year and the qualifying session that was held today showcased that the leaps by which the Prima race truck's performance has increased.

Last year's winner Stuart Oliver, missed the pole by just a few tenths of a second. The Team Castrol Vecton driver's laptime of 1.51.058 was a few tenths off the time chart of topper Steve Thomas' 1:50:995. 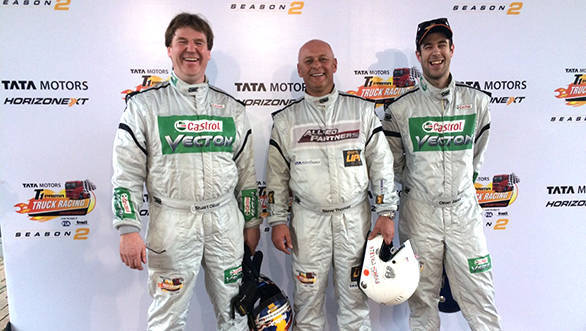 The third spot on the time charts was grabbed by Oliver Janes. His laptime of 1:51:268 brought much cheer to the Team Castrol Vecton camp.

The 16- lap main race of the T1 Prima Truck Racing Championship will be held on March 15, 2015 and will be preceded by an eight lap super qualifier race. Based on how close and hard fought, the fight for pole turned out, the main race is sure to deliver the adrenaline that motorsport junkies crave.