At the 2014 Auto Expo, Bajaj Auto unveiled the Pulsar CS400 concept which received a lot of attention. It is based on the same platform as the discontinued NS200. The production version will be called VS400. Recently, the company's managing director Rahul Bajaj revealed that the VS400 will compete in the space currently dominated by Royal Enfield.

The Bajaj VS400 has been caught testing previously, but the test mule was completely camouflaged. A fresh spy picture has surfaced online which shows a production-ready version being tested on off-road terrain. The side profile reveals that the styling of the production version is very similar to that of the concept version. The difference is that the test mule has a telescopic front suspension while the concept version had upside down front forks. The front brake rotor has been re-positioned on the right side of the wheel. On the CS400 concept it was located on the left side. Also, the exhaust sports a silver shroud. 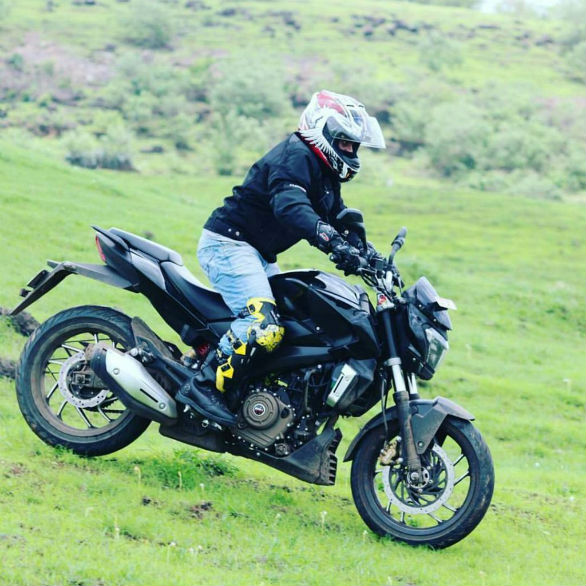 In an interview with CNBC-TV18 and moneycontrol.com, Rahul Bajaj revealed that that VS400 is ready to be launched. However, the company has decided to delay the launch to ensure that its festive season sales don't get hampered by the arrival of a new product. He commented that this delay will give them additional time to ensure that the new motorcycle is completely ready.

The VS400 has retained the LED headlamps, LED tail lamps, LED indicators, belly pan and muscular fuel tank of the concept version. It will come equipped with dual-channel ABS. The Bajaj VS400 will be powered by the same 375cc single-cylinder liquid-cooled engine which also does duty on the KTM Duke 390. However, the power delivery is likely to be more linear. The engine will be mated to a 6-speed transmission. It is expected to be priced around Rs 1.80-2.00 lakh.