That's quite the spread, no? We did compare some of these bikes with each other in our mega-adv test in Ladakh but now Triumph has the newest motorcycle in block in the Tiger 1200 XCx which it launched just days ago. And Ducati is shortly expected to reveal the final India price for the Multistrada 1260 - which we already rode in Spain and wrote this story about. 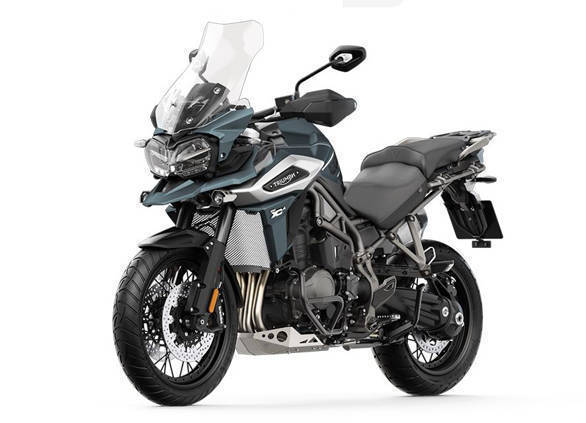 Without going into too much detail, Triumph says that the Tiger 1200, not the Explorer any more receives over a 100 changes, including updates to the engine for refinement and crispness apart from more equipment, more sophisticated electronics and more. And in a downward revision, the Tiger 1200 XCx is priced at Rs 17 lakh instead of the earlier price of Rs 18.75 lakh ex-showroom - that's a substantial price adjustment. So how does the Tiger 1200 XCx compare to its closest peers? 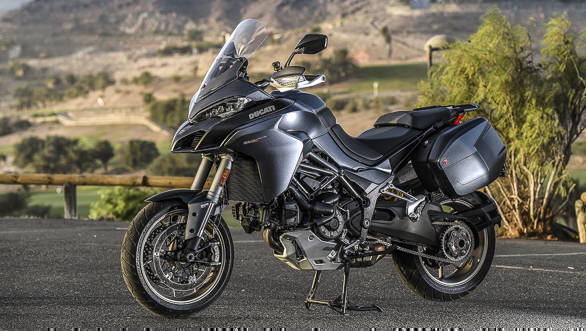 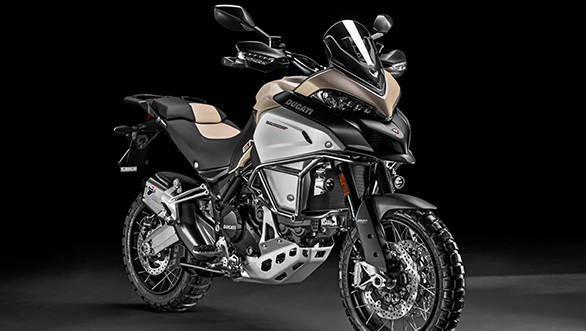 Why did we pick these bikes?
It's easy to dismiss all of the four bikes here by saying the Tiger is incomparable but they, at the very least, set a frame of reference for the performance, equipment and price of the new Tiger 1200 XCx. And it would be foolish to believe that the Tiger 1200 buyer will just not consider any other motorcycle at all before buying one. Especially, given that the 1200 is a CBU and our sources suggest that not all Triumph showrooms will have test ride bikes available.

Powertrains
The Tiger has the second largest engine here but look at the specific ouput. The Triumph is almost as unstressed an engine as the BMW boxer twin and it runs the lowest compression ratio of all too. That's a good thing. It means the Triumph will produce its 200kmph+ performance with the least mechanical strain, both actual as well as in feel. The other end is the Multistrada 1260 which boasts the most torque as well as the most power and it is the lightest bike in this story by a fair margin too. We know the Multi' 1260 is a firecracker. When we tested the old Explorer, we loved the nature of its performance. If the promise is of smoother, crisper power, this will be a fun motorcycle to be sure. 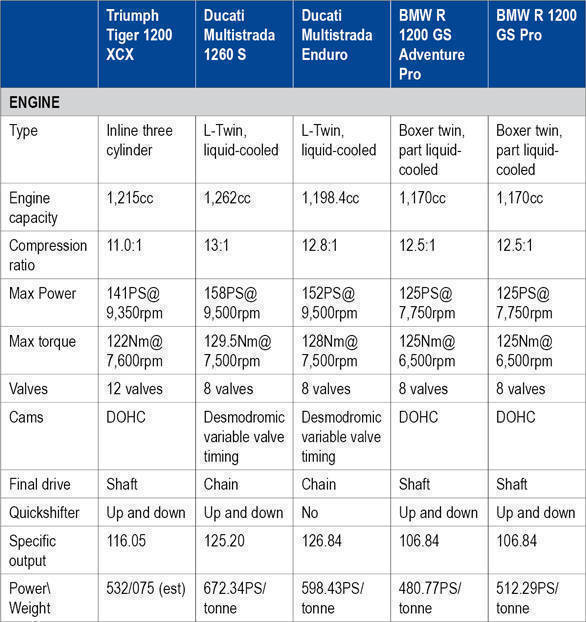 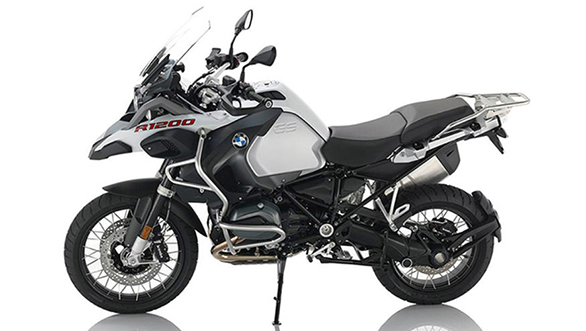 All the motorcycles here now boast IMU-equipped electronics that incude control over the suspension. That is a game-changer. It makes the motorcycles feel vastly better under almost all conditions whether you're blasting down highways, tackling city potholes or going off-road. In that sense the Multi' 1260 S is the least off-road happy of this quintet. The Tiger 1200 XCx? We know the old one was already a very good highway bike. 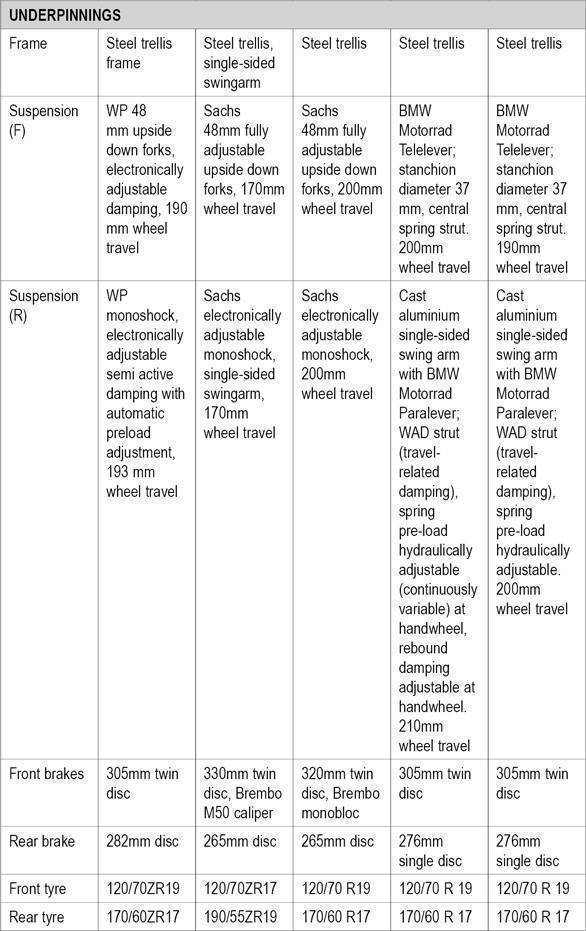 Off road
At 265kg - our estimate - the Tiger 1200 XCx is going to be hard work to off-road although it is a capable motorcycle that really can do it. To get a sense of just how heavy the motorcycle is, get this. The motorcycle with the same tank capacity, the 1260 S is 21kg lighter! And the Multistrada Enduro with its 30 litre tank is still 18kg lighter. That's not insubstantial.

The Tiger has very good wheel travel, though. The serious off-roaders here, the BMWs prefer 200m of travel and the Tiger nearly matches that. Give this bike knobblies and rider skill and it will surprise you - we can't wait to verify this when the test bike arrives.

Electronics
Apart from the missing - and not optional - quickshifter on the Multi' Enduro, these motorcycles are very well-matched on the electronics front. All have colour screens, rider modes - the Tiger has five fixed modes and a sixth adjustable one - while the others allow you to change the defaults within the preset modes.As befits flagship tourers/tour-enduros, these machines are all extremely well-equipped. 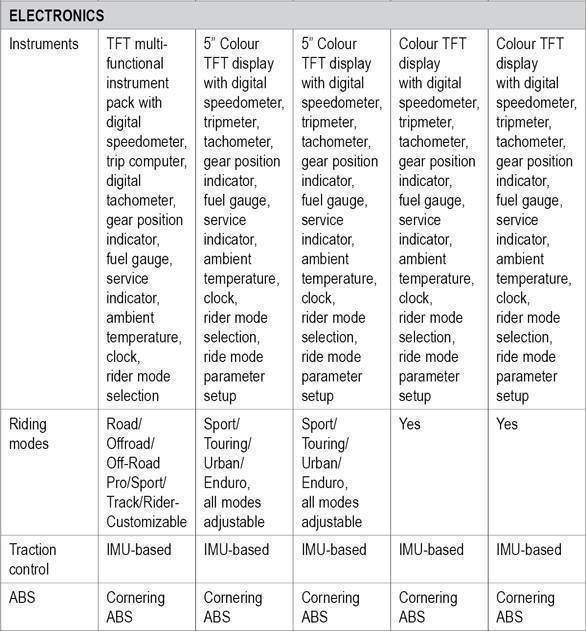 Seat height
Just check out the BMW seat heights. BMW does have accessory lower seats but these are very high motorcycles. On that count, the Tiger 1200 XCx, we wish, had a lower saddle. The width and girth of these motorcycles when added to a high seat height is a cause for worry on all of the motorcycles. Triumph's advantage here is the 20-litre tank which will feel less top heavy than the 30-litre tank-equipped bikes here. The combination is particularly gnarly when making slow u-turns in traffic. 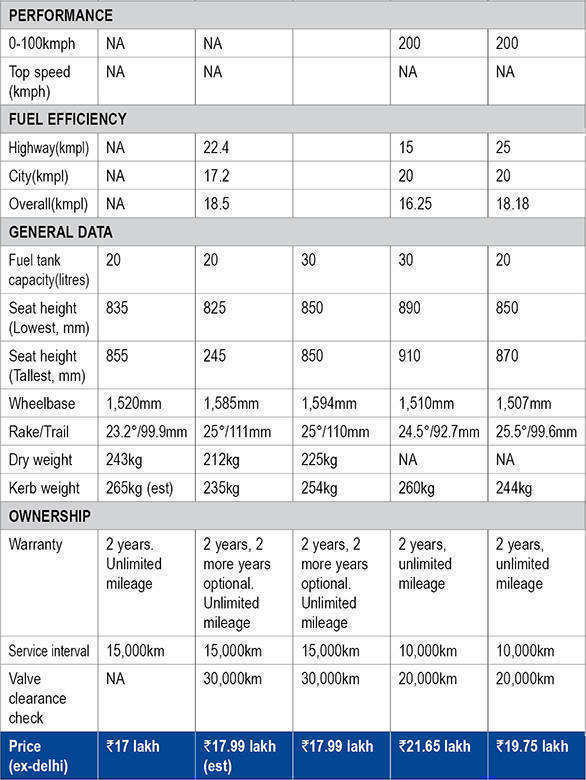 Overall
The Triumph does a good job of making a persuasive case as a Rs 17 lakh showroom in this company. The The BMW R 1200 GS and the R 1200 GS Adventure are both absolute legends and the premium pricing of the BMW is hard not to notice. The Ducatis are surprisngly well priced by the same ken, though. The Multistrada Enduro is a solid off-road capable tour enduro and at Rs 1 lakh more than the Triumph is has light weight and a lot more power on offer too. The Triumph is, as with the 800s, a good blend of spec, capability and appeal though. The new pricing should help Triumph India find more homes for the 1200 XCx than the Explorer managed to be sure. But you have to wonder that if you are already in the Rs 20 lakh bracket, wouldn't the premium brand appeal of Ducati and BMW confuse you? Tell us in the comments! 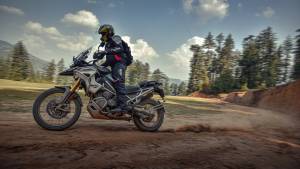