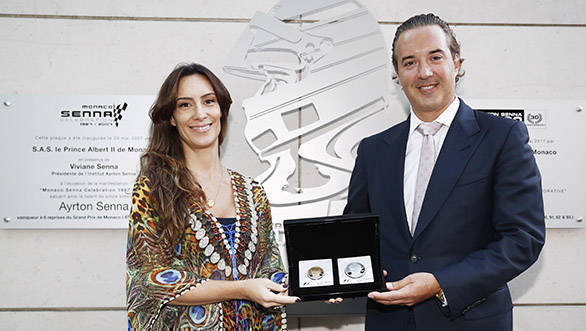 The collection includes six 30oz (850.486g) gold coins, and this number was specifically chosen to mark the anniversary. There are also 180 2.5oz (70gm) gold coins and 300 2.5oz (70gm) silver coins. All coins bear the image of the iconic racing driver. The coins are individually crafted and minted by the Swiss firm Pamp S.A.

Rosland Capital CEO Marin Aleksov presented the coins to Ayrton Senna Institute's director Bianca Senna, who is also the niece of the three-time F1 champ. The coins were unveiled following a ceremony where HRH Prince Albert II of Monaco unveiled a special commemorative plaque of Ayrton Senna at the Fairmont Hotel in Monte Carlo.

Speaking at the unveiling, Marin Aleksov said that the company was honoured to be part of the celebrations of the 30th anniversary of Ayrton Senna's win at Monaco. He also added that a part of proceeds from the sales will be given to the foundation.