Tso Kar is a pretty lake with brackish water, a marshy shore and an unpleasant smell. The camp next to it, one we have used often, is the same mix of visual appeal and tough conditions. But first, we had to get there.

We started from Jispa at 04:30am. It was very cold and as usual, we were to miss the glorious sight of the Darcha valley thanks to our penchant for long distances and early mornings. When dawn broke, we crossed the wee beauty that is the Deepak Tal and carried on towards the first of three passes for the day, Baralachala. 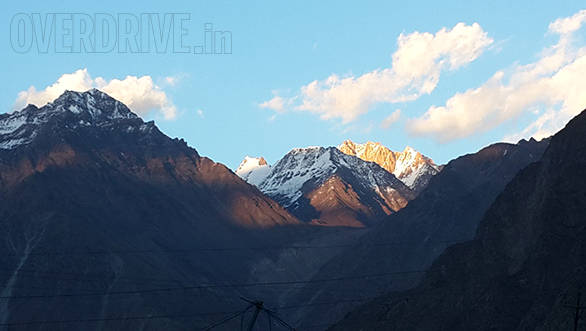 The first rays of the sun at Baralachala

The climb was tough on our Centuros but they fought off the steep roads gamely and soon we were in Bharatpur sipping tea and waiting for noodles and omelettes.

Then we started forward towards Sarchu. Sarchu is usually a spectacular plain with a deep river in the distance running through it. Camps dot the grassy plain normally but two were being packed up and one seemed to still be up and running. A clear sign of the coming winter. Soon the snow would come and the area would be closed for riders.

After Sarchu comes the spectacular Gata Loops. An insane set of hairpins that climb a mountain and set you up for the climb to Nakeela. So high do the loops take you that arriving at the top of Nakeela is almost a non-event.

Having passed another of the super polite army convoys, we descended down to the valley before ascending once again to crest Lachulungla. This pass, at over 16,000 feet, is a proper high altitude pass. It's a visually spectacular climb but even more spectacular is Pang on the other side.

Pang was a tough gig. It's all dirt roads and the Centuros took epic punishment. Endless stones and dust worked the chassis hard while a white layer of dust on our gear and on the bikes was almost a rite of passage.

When we stopped for lunch at Pang, all was not well. One of our participants was clearly suffering. At the Pang army camp, the kind doctor examined her and asked her to return to the plains if possible. That's how tough the place is. We installed her in our camera car with an oxygen cylinder and then carried on. Next up was the More Plain. Words cannot describe the magnificent, austere beauty of the plain. It's largely covered in scrub and extends away from you in every direction before meeting mountains of epic scale and colour.

Towards the end of the plain lies Debring where were to take the dirt road to Tso Kar, our stop for the night. The plain was fun. A terrific tarmac road runs through it and after a trying day, the Centuros finally got some space to stretch out and play. We were enjoying the surprising cornering abilities on the few sweeping corners while the suspension kept the few bumps from ruining the fun.

The sun had gone behind the mountains by this point and the plain was a cold place to be.

Having crossed the final stretch of dirt road, we rode into camp. It was cold, the wind was picking up and the promise of a trying night lay ahead.

But the drama was just unfolding. Our camp wasn't a high pass but at 14,500 feet it's a properly get-sick type high. Two participants were already showing signs of altitude sickness setting in. After all a fourteen hour ride may be a normal day at work for us but it doesn't make it any easier. We had covered 225-odd kilometres at an average height of about 13,500 feet or more. Not a tourist event, this, then. Our wee Centuros held up but our riders were flagging.

After a quick tete-a-tete, we decided that the lady participant would be safer in the hospital in Leh. Poor Alan and photographer Suresh were roped into driving the camera car over the 17,500 feet high Tanglangla pass and get her to Leh. The remoteness of the region meant that as soon as the trio left, we had no way of checking on them.

Meanwhile, the second participant was under five heavy quilts, on medication and on oxygen. Would he be able to recover enough to ride on the morrow? Would Sonali, the girl participant be okay? Would Alan and Suresh be able to cross that pass in the night safely?

It was with a lot of questions screaming through our heads that finally sleep came. Only the shocking cold of the night and endless flapping of the tent walls remained.