The short version is that the Suzuka 8 Hours is a motorcycle endurance race, run at the Suzuka International Circuit since 1978. But over the years it has grown tremendously in popularity and stature. All you need to do is look at the record of past winners. The list reads likes a who's who of the motorcycle racing world from the '80s, '90s and 2000s. Mick Doohan, Wayne Rainey, Wayne Gardner and Valentino Rossi have all won at some point of time. 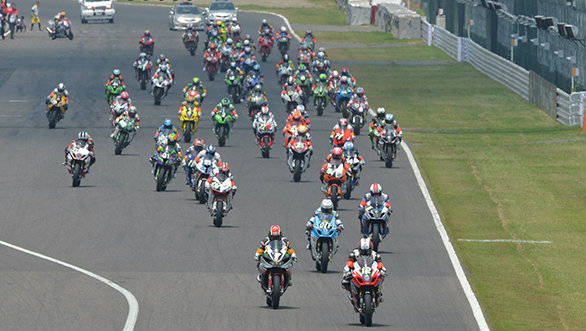 It's also considered important by the big four Japanese manufacturers (Honda, Kawasaki, Suzuki and Yamaha) who use it as a proving ground of sorts, to showcase how good their motorcycles are. Or rather how much better they are than the competition. It's so important to the big four manufactures that the teams in MotoGP and World Superbikes often have participation in the Suzuka 8 Hours written into the riders' contracts when they sign up with the factory teams. This ensures that the grid is always full of current and past international stars and champions. The race also attracts the best Japanese riders for whom the race is the most prestigious event of the annual racing calendar.

This year has seen a record 71 teams registering for the 37th edition that runs as part of the FIM Endurance World Championship. Amongst those 71 teams is another famous world champion from yester years  Kevin Schwantz. Schwantz won the 1993 GP500 championship and is considered to be one of the greats of motorcycle racing. He turned 50 this year and to celebrate the occasion he will be participating along with his old Suzuka 8 Hour team-mate Satoshi Tsujimoto who is 54. They will race for the Legends of Yoshimura Shell Advance racing team to mark the 60th anniversary of legendary Suzuki tuner Pop Yoshimura's racing business. Of course, Schwantz also raced here last year when he teamed up with Noriyuki Haga and Yukio Kagama, finishing third in the event.

Jonathan Rea was part of the winning team in 2012 and is back again this year. When asked how come he's back this year he said, "I've always enjoyed the race in the past, never really enjoyed the thought of it because it's so tough, but it's afterwards when you really appreciate it. During the actual race? There's nothing I enjoy about it at all, especially as my team is the only one that does it with two riders - the others tend to do it with three. That makes it even tougher." Riders say that the race is so gruelling that they'll still be feeling the negative effects of the exertion up to three weeks later.

Other familiar faces on the grid will include Noriyuki Haga, Randy de Puniet and Leon Haslam to name a few. Missing are big names from the MotoGP grid and though the race always occurs during the mid season break, the gruelling nature and the toll that it takes on the bodies of the racers means that the top class riders prefer to give it a miss. This year the race takes place on Sunday the 27th of July and you can catch live updates of all the action at www.ustream.tv/channel/suzuka-event.