After two days of racing in Goa, Yuva emerged as a clear winner, topping the timesheets on both days, in Group D.  In Group B, the championship ended in a tie, but three-time Desert Storm winner Yuva took the win by 900 milliseconds on aggregate stage timings.

Sathyaraj Arumgum was second on both days in Group D, bringing home a 1-2 finish for the team. With a fourth and third place over the weekend of riding, he was tied for third on points in Group B but finished fourth on aggregate stage times.

Team Hero MotoSports won Group B riding on the newly unveiled Hero MotoSports Xpulse Rally 200, which the team will be racing on in the upcoming 2022 racing season as well.

The Indian National Rally Sprint Championship (INSRC) 2021, organized by Motorsport Inc. is an official motorcycle championship under the FMSCI (Federation of MotorSports clubs of India). The INSRC  2021 comprises of eight zonal qualifier rounds, with the top 5 riders from each zone qualifying for the finals in Goa.

Prior to their victory at the finals, team Hero MotoSports riders Sathyaraj and Yuvakumar had participated in the South, East and North Zone qualifying races of the championship and had emerged victorious with the trophies for the 'Fastest Rider' and 'Best Team' in all three zones.

Team Hero MotoSports rider, Yuvakumar said "We had two exciting days in Goa riding against the best riders from across the country. Winning the Championship in Group B and Group D is an incredible result and the new Xpulse Rally 200 was running really well. Many thanks to the entire team for the constant support and for the hard work in preparing this championship-winning bike."

Team Hero MotoSports rider, Sathyaraj Arumgum said "I am really happy to finish as the runner up in the Sprint Championship. The Finals were tough with top competitors from all over the country. The track was hard and slushy with many undulations, but with the new Xpulse 200 Rally as well as the Stock Xpulse, we were able to clear the obstacles with ease. It is a great way to end the year, and I'm looking forward to more great results with the new Rally bike in the coming season."


DISCLAIMER: This information is published as per the press release sent to us. It has not been verified or ratified by OVERDRIVE.
Tags:    Hero MotoSports | 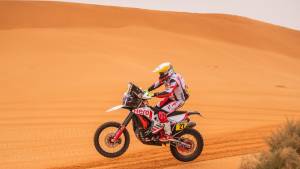 Hero MotoSports off to a flying start in...
Advertisement