The 2004 Yamaha YZF-R6 is old but its singing voice still has the very same urgency and sweetness that we so, so love. Shifting past 15,000rpm, I feed it the gears it likes so much, when suddenly the world goes hazy in the distance. In the scant slice of time between the last corner of the Kari Motor Speedway and the start-finish line, many things have happened. A 90kmph missile has gathered momentum and is now north of 160kmph and the shrieking lunge to the horizon is furious and urgent. And the world's gone hazy. Should we panic?

It's a racetrack though and I see no flags, so I resist my instinct to back off the gas. And then my visor is covered in big, fat drops of rain.

My natural reaction to the rain is a smile. Sometimes even a laugh. But today I'm busy. There's the matter of having to brake from 200kmph into Turn One, which in the wet is, maybe a 60kmph corner. 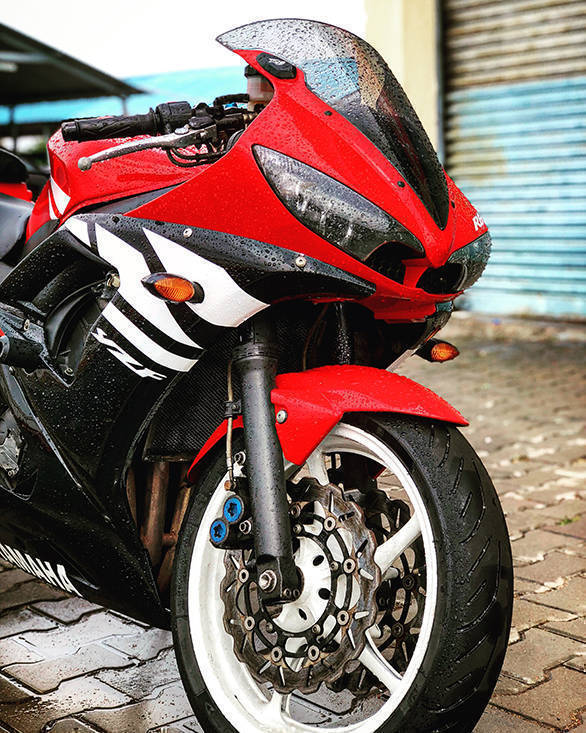 That's Feraci, fettled and restored by the Indimotard Greasehouse. On brand-new Michelin Pilot Power 3s, the R6 showed why the Yamaha is so highly rated as the most effective of the 600cc supersports. Notice the teeny-tiny chicken strip, despite the wet!

I imagine that the picture of a red-black-white R6 flying through the spray at breakneck speed with a rider on it looks superb. I imagine it as a black and white comic book superhero setting his jaw in a firm, can-do manner and attacking the problem with an unflappable resolution. I'm Marv from the outside, even.

The truth is that there is more than a little panic. It's been a while since I had tunnel vision on a 110PS motorcycle. The last few years of riding the racetrack enforces itself, and I peel the edges of this small world pack to its real shape, just to make space for my brain to tackle the task of not pasting red-white-black plastic all over Kari's newly installed air fence.

And then I remember that I don't have ABS today. So I pick a reasonably conservative distance from the turn-in point and squeeze the front brake on, tapping the rear brake lightly just as a hat tip to it being wet. As the new Michelin Pilot Power 3 digs in, I can ramp the brake force up. I know from previous experience that Kari is a pretty grippy place in the wet. Some faith. Lots of trust. Only in the middle of turn three do I realise that I've been holding my breath.

But despite the fear - and the glory of achievement - the next few laps were epic. 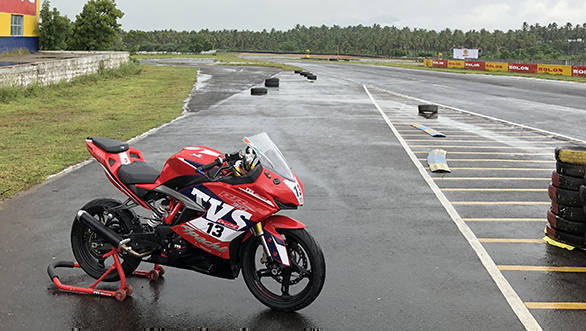 The TVS Race-spec Apache RR 310 was the other motorcycle I got to ride really hard in the wet. That story is up at OVERDRIVE too!

Vignessh Vaidyanathan, easily the smoothest, more philosophical of our instructors, was on his trusty Honda 2006 CBR600RR and I was on the R6. It was very wet, including standing water at two apexes but we were in the mood to, as Vignessh likes to say, "Belt it." He is faster than me and three laps in, he'd passed me, negotiated a gaggle of students in his smooth manner and disappeared into the distance. Wow.

But what laps! Such concentration! How much feeling and feedback can you extract from a motorcycle! Every corner needed the utmost focus to ensure that you braked as hard as you dared without overstepping. A front-wheel lockup would end the day rapidly. Then came the question of how much lean angle was safe. And the eternal battle to open the throttle earlier and earlier, fighting for traction, keeping the line and hoping that today was not the day I was to be high-sided into low Earth orbit. And have to answer to Daniel Anandaraj for destroying not only mine but also his half of the R6. And as Vignessh pointed out - the slides out of the fast last corner on to the straight as the rear wheel spins and struggles and then suddenly, it's nearly vertical and you're shooting forward. A human cannonball with the speed control in his right hand. 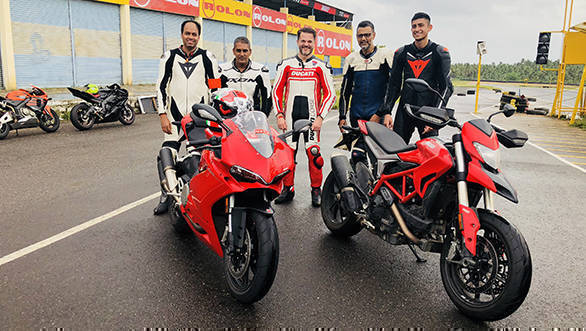 Indimotard-OVERDRIVE TWO Riding School's instructors - Vignessh Vaidyanathan, Shumi, Anand Dharmaraj and Rishi Agarwal pose with Sergi Canovas who heads Ducati in India, one of the students at our wettest riding school in the 14 years that TWO has been in operation

I suspect that both Vignessh and I were more than a little relieved that after 5-6 laps of this terrifying and compelling dance, the red flags signalled the end of the session. I'd survived the wiggles on the brakes as the lack of a slipper clutch wrote invisible wavy lines on the inky black tarmac. I'd survived the little two-wheel drift that I knew awaited the R6 in the middle of the so-critical last corner. On each lap. I'd managed, to brake from stupendous speed into turn one without making a mistake. Maybe I am Marv.

At any rate, I'd survived. And that, at a pace I'll call good enough for me on the day. With the utter and complete lack of electronic talent management.

Taught me two things, it did. First, if you put your mind to it, we all have it in us. To learn the skills and technique needed to figure out how to... whatever it may be.

We rarely - and this is a good thing - ride bikes without at least ABS today. With the electronics, the bike's dash would be lit like a Christmas tree! And that brings me to the un-electronic R6 and my second learning. Whether you trigger them into saving your arse or not, the biggest difference from having ABS and traction control available is, perhaps, not in the safety quotient. It's just such a relief to know it's there.

Anyone know of a relief package for a gorgeous 2004 R6 then? 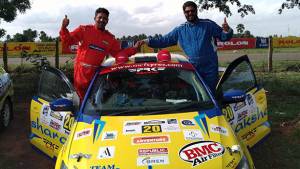 Jawa commences deliveries of the...
Advertisement