There are roads well worn with footsteps and tyre tracks of people who went before us. There are also dusty trails and paths that we stumble upon by chance, but decide to walk down. And then, there are those surfaces that appear to be so strewn with brambles that no one would consider looking for a path down which to walk. But a few determined souls do just that, hacking away at all obstacles and carving out paths that can be traversed not only by them, but by others who might wish to follow.

As I write this, Dani Pedrosa has just crashed during a practice session at the Japanese round of the MotoGP championship at Motegi and broken his collarbone. Reports say that he will fly to Spain for surgery right away. Dani's said that it's a shame because racing at Honda's home track, and one of his personal favourite tracks, is something he'd have loved to do. He's also said that his focus now is getting back on the motorcycle as soon as he can.

Something rather similar happened closer to home during a round of the 2016 Asia Road Racing Championship at the Buddh International Circuit. Sarath Kumar, competing in the Super Sport 600cc class, crashed, also breaking his collarbone. When I spoke to Ramji Govindrajan of Ten10 Racing who is Sarath's mentor, he said something similar. It was a shame that what happened, happened. After all, the BIC is a track that Sarath has home advantage at. And given that he'd spent the better part of the 2016 season recovering from a knee injury, an additional injury certainly was a setback. But, of course, they were focussing on recovery and getting him back on the bike as soon as possible.

A further few years ago, I remember tracking CS Santosh's progress at the Abu Dhabi round of the 2013 World Cross Country Rally Championship. Santosh crashed, his motorcycle's fuel tank exploded, and he found himself engulfed in flames, which led to third-degree burns. It was a fairly large setback. And while it might have been debilitating for a while, it seemed to only strengthen his resolve to get back on the bike as soon as possible! 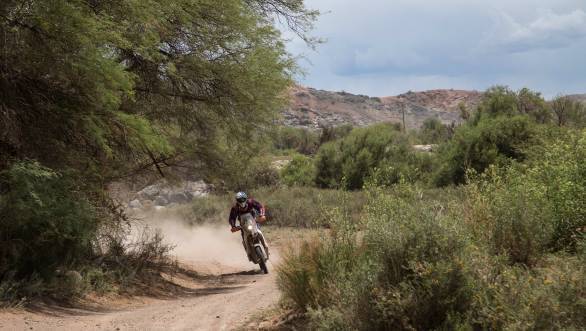 Here then are three riders who do what they do purely because they love the sport. They love motorcycles, and they love racing them. Dani Pedrosa has never become MotoGP world champion in the premier class. Chances are he's well aware that the clock's ticking and he's run out of time. And while I'm sure the fact that Honda pays him to race helps pay the bills and then some, I certainly don't think that it's the reason he does it.

Take Sarath, who discovered at the racetrack, for the first time in his life, something he excelled at. Since then, he's done everything in his power to ensure he keeps racing, also doing other sorts of work to keep his head above the water. He's got a love for racing that he once told me he found hard to explain. And then there's CS Santosh, who once articulately explained his love for off-road motorcycle sport as something that went far beyond the high of winning. Instead he likened it to life itself - the concept of pure freedom, and going where no path exists, both literally and metaphorically.

The examples extend to racecar drivers too. Take the likes of Alex Zanardi and Robert Kubica, who emerged from terrifying crashes, determined to find a way to continue racing, competing and challenging themselves. This need to push themselves and be the best they can be, it's what motivates them. The fame, fortune, support from the fans, it's all extraneous. I'm sure it can be gratifying, but very rarely will you find that it's something that truly affects them or drives them.

But what's gotten me thinking so much about human motivation? The truth is it was a seemingly innocuous question posed to me at a coffee shop - "So you like racing?"

At first the question seemed to flabbergast me. After all, wasn't obvious that I "like" racing, given that I've spent the last decade traipsing from racetrack to racetrack, hunting down racecar drivers and riders, getting them to talk to me. I sat there wondering how to explain to this person that "like" didn't even begin to describe it. Of course, I like watching a good race with plenty of battles and scraps. Of course, I like watching the raw human emotion at the racetrack - people at their most vulnerable when they lose, people at their most ecstatic when they win. The ones with perpetual grins, suddenly tight-lipped. The ones eternally grim, suddenly whooping and cheering in delight.

But how could I even begin to explain the part of motorsport that I loved? The fact that for me, it was essentially a study in human motivation. The fact that dissecting what made these men and women overcome money woes, injuries, streaks of losses, and continue pressing on is what drove me. The fact that their motivation and determination in turn motivated me and made me determined. The fact that I learned more about human behaviour just from my observation of people at the racetrack than I could have learned at any school. And the fact that it was this love for motorsport that gave me everything that I ever wanted. It fuelled my desire to write, about so very many things, and it fuelled my desire to watch more races, speak to more racers. In a sense, it fulfilled itself. And it fulfilled me.

Which brings me to this. What influences your decision to travel down any chosen path? And more importantly, what causes you to choose, when you do chance upon a fork in the road, the one that leads left or the one that leads right. Very often, if you manage to look long enough for answers - honest ones - and distil what you're finally left with, you'll find the essence of what makes you, you. It's a complicated and terrifying exercise. It can lead you to answers you won't like. But it's certainly well worth it. At the end of the day, you'll know yourself better. And I urge you to try it.

This column first appeared in the November 2016 issue of OVERDRIVE. For more opinions from Vaishali, click here.